This Independence Day, we are less free than the year before. We must work together for liberty

Liberty is not a consumer item to market to individuals. It is a common good 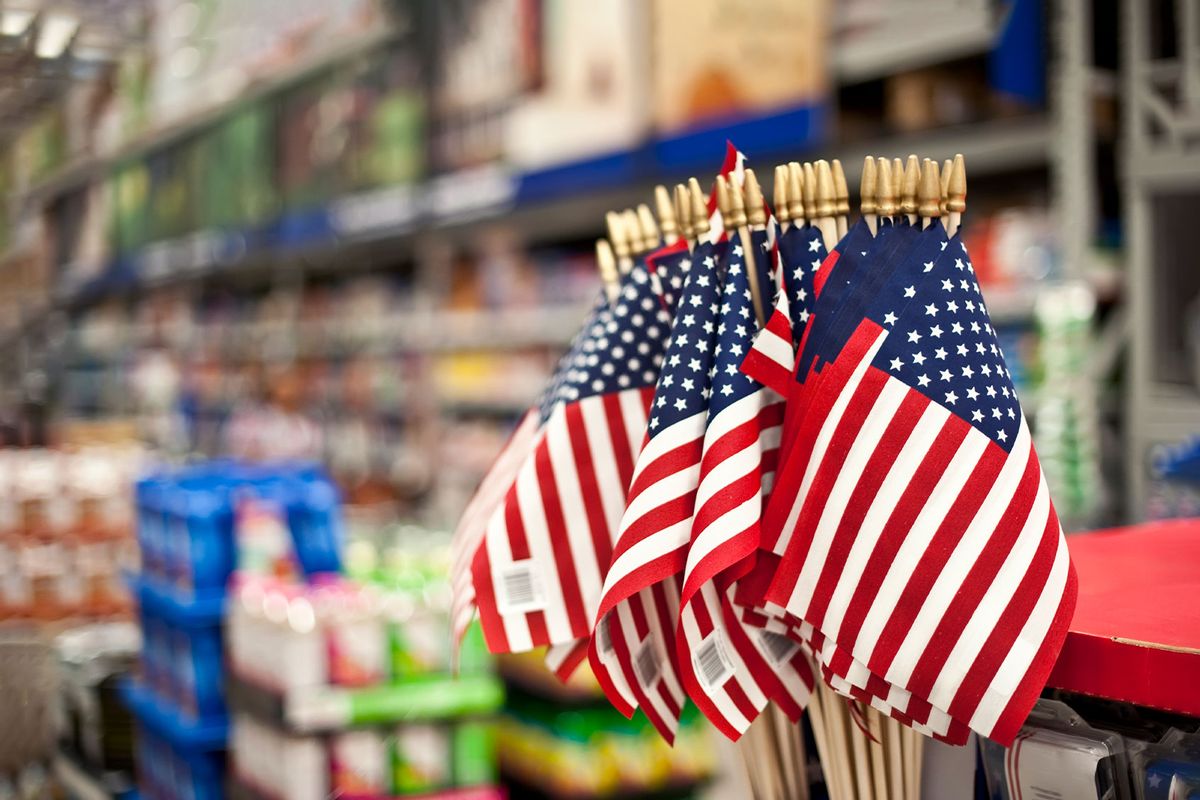 American flags for sale in a Megastore (Getty Images/Juanmonino)
--

It's parade season. The season of celebrating hard won freedoms. As a queer Nigerian American woman, the three weeks between mid-June and early July — when Juneteenth, Pride and Independence Day collide in rapid succession — should be a cause for joy. But instead, I look out at these spectacles, and feel cognitive dissonance.

"It's not shame," I say over Zoom to my friend Darrel Alejandro Holnes, who is vacationing in Istanbul with his partner. "I'm just not sure how to uncomplicatedly celebrate Pride when, as a Black person — queer or otherwise — in the U.S., the biggest threat to our life is this country."

Darrel is Panamanian, a queer Afrolatino poet and playwright, and one of the friends I count on to help untangle my mind when the world gets too knotted for me to understand.

How are we supposed to celebrate July 4 after Juneteenth?

"When Pride becomes a parade instead of a march, it becomes about selling things, which prioritizes the people with the most buying power—cis-white men," laments Darrel. "It's no longer about protecting the most vulnerable, which means Pride is seldom if ever about Black people."

As I look around, I see how right he is. Restaurants along the pride parade route in New York charged hundreds of dollars to brunch-goers for two hours of bottomless mimosas. The Standard Hotel at High Line hosted no fewer than five events and featured a special PRIDE! package for the month of June, which included "a complimentary flight of curated, limited-edition Pride cocktails." The commodification isn't limited to Pride. Earlier in June, Walmart's Great Value label marketed a "Celebration Edition: Juneteenth Ice Cream." Thrillist reports that celebrating Independence Day can cost you anywhere from $50 at The Summer Club in Long Island to $500 at Harriet's Rooftop & Lounge at 1 Hotel Brooklyn Bridge. Celebrating freedom has never cost so much money. What began as public and communal demands for dignity and human rights, or commemorations of freedom, have become marketing schemes.

What does it mean to be a proud feminist in a country that's just overturned Roe v. Wade and birthing people's right to choose? What is it to be out and proud in a country where trans people are under siege and marriage equality appears to be next on the chopping block? What does it mean to be a woman with a Black American artist father and a Nigerian Muslim mother in a country that hates Black people? How do I fully participate in Pride — or commemorate any freedom — when I can't fully participate in America? I can't.

Luckily, being raised in a community of Black and African people, I was shown other possibilities beyond consumerism. As a child, I lived in my head because I lived in a world where Black people were — and still are — at constant risk of being murdered by both individual white people and the police. A world that was, and still is not, made for me. I had to be constantly imagining another one. Raised by a Black American visual artist father and a Nigerian Muslim mother, art, oral storytelling, and literature became the vehicles by which I dreamed.

The first march I ever attended was a protest in January 2000, to bring down the confederate flag from the top of the South Carolina State House. There, at age 15, I marched along with 46,000 others. The parades we attended in my childhood celebrated Juneteenth and were full of catfish fries and Black marching bands and color guards. I saw firsthand through those experiences that marches were about community.

I was one of the lawyers who helped win marriage equality. And yes, the GOP can take it away

As a kid, I didn't know any adult or person my age who was queer like me. As a result, the future I imagined was full of blank spots and dreams that weren't mine, though I tried to convince myself they were. Whatever I imagined my adult life would be like, it wasn't marches turned into marketing points. I dreamed of a world that let me be me in all my queerness, Blackness and womanhood. And if a parade came, it wouldn't be about corporate commodification. It would be to celebrate a world where freedom was more than an ideal or a talking point for politicians, pundits and CEOs.

The right markets liberty as being for individuals, but liberty is — and always has been — a public good.

Like any month of any year, Pride Month was a month where Black trans women were most at risk to be murdered. It was the month when the anti-union establishments of Starbucks and Amazon, Twitter, online advertisements, and city-hung Pride posters leveraged queerness to sell me lattes and groceries barely a month after an 18-year-old-white man has been charged with domestic terrorism and hate crimes for the shooting deaths of ten Black people in a Buffalo grocery store. Leveraging the same queerness that incited a mass shooter to kill 49 people and injure 53 at Pulse nightclub in 2016. The same queerness that, as we speak, is being banned in books across the country and targeted by Proud Boys, TERFs, politicians, school boards and public figures.

The right markets liberty as being for individuals, but liberty is — and always has been — a public good. Like progress, transformation and activism, the act of living out and proud begins in magical thinking. Being out and proud is a life that every queer and trans person in this world deserves. I seek community. Community being the place where magical thinking comes true. I imagine, act and write towards a world that can carry us beyond the freedoms of this one. Where coming out is the work of "I am," a world safe for us all. W world that protects Black people — especially Black trans women — is the work of "We."

This Independence Day is one where we have fewer freedoms and safeties than we did a year ago. As a Black person, I follow in my ancestors' footsteps, knowing that the only way to honor the ideals of the U.S. is to return to community centered labor, to collective resistance — the only true arbiter of change. After all, freedom is something gained and lost, not individually, but together.

about July 4, Juneteenth, Pride and freedom: