Headbanging woodpeckers love what they do — and incredibly, haven't evolved any protective head gear 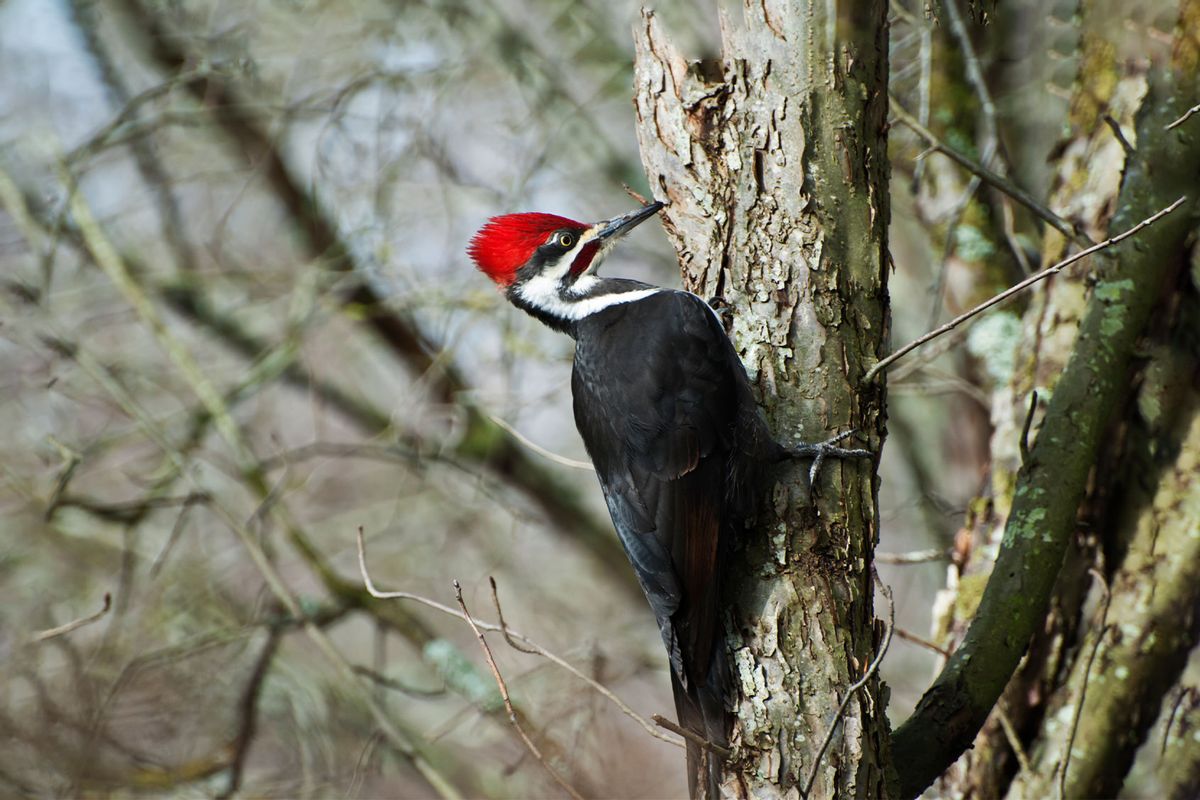 Construction workers don gloves and earplugs when wielding jackhammers. Motorcyclists wear helmets when they ride. It stands to reason that woodpeckers would evolve some kind of comparable safety gear to protect their heads from the constant, repetitive stress of banging their face against a woody surface.

That assumption, it turns out, would be wrong. While natural history is littered with animals who have evolved bony or cartilaginous armor to protect from heavy blows — including animals like rams, or armored dinosaurs like the ankylosaurus — woodpeckers have surprisingly little protection from such vibrations.

The hypothesis — that woodpeckers are adept at absorbing the shock during impact with a tree or other woody plant like a saguaro — is "often presented as a fact," said Sam van Wassenbergh, a biology professor at the University of Antwerp who is corresponding author for a study into the woodpecker's lack of shock absorbing armor. In a video abstract Van Wassenbergh noted that engineers, zoo placards, books and newspapers often (and without evidence) describe the woodpecker's head as a "natural shock absorber."

The discovery that woodpeckers are pecking away unprotected comes from a recent paper published by the scientific journal Current Biology; the online version of the paper includes some entertaining slow-motion video clips of woodpeckers pecking. Every time the feisty bird's beak makes contact with the hard surface — at up to 20 pecks per second — the impact vibrates throughout its head and neck. Feathers rustle and muscles ripple as the bird's entire little body appears to absorb each blow.

Woodpeckers do not have any shock absorption built into their skulls; indeed, the notion that they could is self-evidently absurd "since any absorption or dissipation of the head's kinetic energy by the skull would likely impair the bird's hammering performance and is therefore unlikely to have evolved by natural selection."

It seemed unthinkable that there wouldn't be some kind of natural shock absorber in the woodpecker's head or neck to protect it from sustained neurological damage, given that they evolved to peck incessantly. For years, many scientists assumed that a spongy bone between the bird's upper beak and brain case served this function — perhaps because it would almost seem cruel for nature to dictate otherwise.

Yet as the Current Biology study finds, woodpeckers do not have any shock absorption built into their skulls; indeed, the notion that they could is self-evidently absurd "since any absorption or dissipation of the head's kinetic energy by the skull would likely impair the bird's hammering performance and is therefore unlikely to have evolved by natural selection."

So does that mean these headbanging birds are constantly self-inflicting brain damage as they bang their beaks into hard surfaces? The researchers can't say for sure, though they do seem not to have any shock absorption built into their heads. At the least, the study notes that the impact on woodpeckers' skulls appears to be "below primate concussion thresholds."

RELATED: It's time to shed our misconceptions about chicken intelligence

To study this, a group of scientists from Belgium, Canada and France captured high-speed videos of six woodpeckers in an aviary as they went about their pecking — two black woodpeckers (Dryocopus martius), two pileated woodpeckers (Dryocopus pileatus) and two great spotted woodpeckers (Dendrocopos major). Breaking down 109 videos frame by frame, the researchers performed a kinematic analysis, or one that focuses on the mechanics behind how bodies move without regard to the forces causing their motion. They then plugged this data into various models which helped them figure out exactly how the bird's skull did or did not serve as a shock observer.

"Together, these results reveal that the heads of woodpeckers function as stiff hammers during pecking," the researchers conclude, later adding that "the zones of spongy bone at both the coup and contrecoup side of the braincase... probably serve an important role in 'resisting' impact forces without failing rather than 'absorbing' impact energy by elastic deforming."

Like athletes banging their heads against their lockers before a big game, or music lovers moshing at a concern, woodpeckers pay no mind to the state of their brains as they do the thing they love most.

Like athletes banging their heads against their lockers before a big game, or music lovers moshing at a concern, woodpeckers pay no mind to the state of their brains as they do the thing they love most.

And make no mistake about it: Just like football players and hard rockers, woodpeckers very much love pecking, regardless of the possible damage to their brains.

"When you are observing woodpeckers for many days, like I did during the study, I'm sure that anyone will get the impression that these birds absolutely love pecking," van Wassenbergh told Salon by email. "Even if they had enough food, every 15 minutes, they [would] find themselves a spot to do their thing."

When Salon asked van Wassenbergh whether woodpeckers feel any pain while they peck, he speculated that it is unlikely given that they peck every day and uninjured animals generally do not feel pain while performing natural behavior. Still, I found the slow motion pecking videos difficult to watch; any head injury victim will likely wince at the thought of what those birds are enduring.

"Indeed, watching these videos makes us humans feel sorry for the animal, and we think of pain," van Wassenbergh acknowledged. "But this is our human perspective. If we humans hit our head, it is an accident, and likely it will hurt. Woodpeckers are adapted to this behavior, making it a completely different situation for them."

Perhaps it is that very tendency to anthropomorphize animals that results in these human assumptions — in the case of woodpeckers, to assume that they would need shock absorbers in their skull in order to avoid suffering.

"It is a logical idea for us, as humans, if we see an animal smashing its head against a tree to believe that it would be great for them to have a build-in shock absorber," van Wassenbergh explained. "We would like to have an airbag or a helmet with a shock-dampening layer in that case. I think this is why the hypotheses that were put forward in the scientific literature, like the role of the spongy bone at the base of the beak, sounded evident. However, the more you think about it, the less a built-in shock absorber makes sense for an animal that must deliver strong shocks to the tree to knock away pieces of wood."