It’s time to shed our misconceptions about chicken intelligence

I'm a scientist studying animal cognition. There is a lot more going on in the mind of a chicken than most know 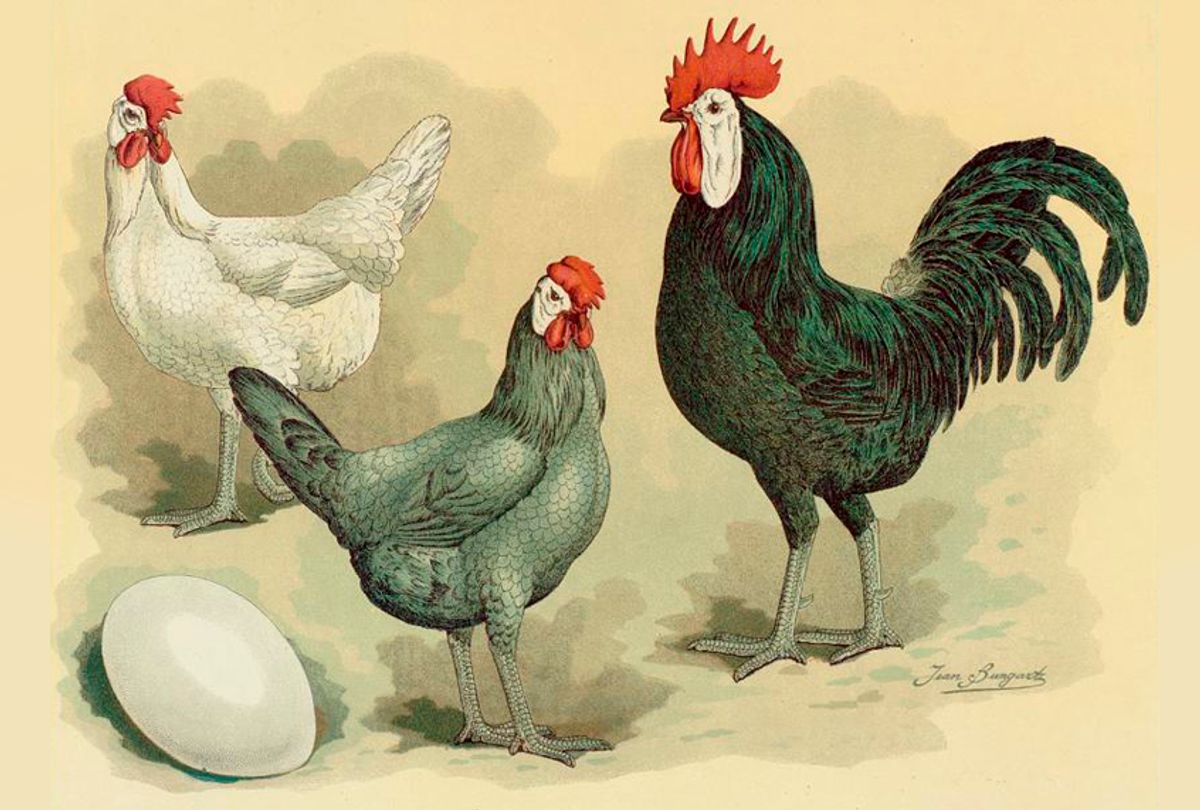 Interest in raising backyard chickens spiked after the start of the pandemic, and shows no sign of slowing down. As a chicken owner, I have had a steady stream of curious friends visit my hobby farm to see my setup and ask how they can get started with their own flock. I have been shocked by the kinds of questions I've been getting about my chickens. The public's persistent misunderstanding of chicken behavior and intelligence is surely rooted in our relationship to them as a food source; we see them as a farm commodity and not an animal worth thinking about.

But I have spent a lot of time thinking about my chickens. As a scientist studying animal cognition, I feel obligated to help the public shed our misconceptions about chickens and see them for the complex — and admittedly somewhat comical — creatures that they are.

The biggest misconception most visitors to my farm have concerns something rather mundane: what chickens eat. When I tell people that I feed my chickens raw meat, their jaws drop. But chickens absolutely love meat. My chickens are never happier than when tearing into a plate full of kitchen scraps with strips of raw pork or beef.

I think the picture most people have of chickens is of birds pecking away at a tray full of corn. Many supermarkets and restaurants advertise "corn-fed chicken" as a superior type of meat, which surely contributes to the pervasive idea that chickens are corn-loving vegetarians. But this is patently false. Chickens are omnivores: they eat both vegetation and meat.

RELATED: Stupid turkeys? Scientists say that the unfairly maligned bird may actually be stuffed with smarts

My chickens have access to a huge fenced in area where they tear up the ground in search of worms and bugs. Chickens will also eat lizards, frogs, and even mice. Like many chicken owners, I have witnessed my chickens at their most velociraptor-like when fighting each other over access to a mouse they've killed. The idea that chickens are gentle little vegetarians is nothing like reality; a reality wherein a chicken would surely kill and eat a human if they were only an order of magnitude larger.

The image we have of chickens scurrying around a dusty farmyard also paints a false picture of the kind of animal that they are. Chickens are jungle birds; happiest when surrounded by or perched in trees. Most people do not think of chickens as tree-loving animals, but this is another misconception that needs to be debunked.

My chicken coop has ceilings that are nearly ten feet tall, with tree-like branches I have installed about eight feet up in the air. This is where my chickens go to roost at night. Undoubtedly, they would prefer to roost even higher if I had the space. Visitors are amazed if not shocked when they see my chickens happily perched in the rafters. Most backyard chicken coops are only a few feet off the ground, and some larger commercial operations don't have roosts for their chickens at all (which is illegal in some countries due to welfare laws). Chickens sleeping on the ground or on short perches is, from the perspective of an animal behavior researcher like me, a bonkers and ridiculous situation. Farm chickens are, for all intents and purposes, the same species of bird as their wild ancestor: the red junglefowl. These wild chickens want nothing more than to avoid the ground at night, where they are vulnerable to any number of predators. In the wild, adult chickens prefer to roost as high up in the trees as they can get – reaching as far as 40 feet (12 meters). Domestic chickens are no different: they would love to be high up in the trees at night, which is why my unusually tall perches are not that unusual in the eyes of a chicken.

Perhaps you are wondering how chickens manage to get that high up in trees if they can't fly. That is another misconception that needs revision. Chickens can and do fly – albeit for short distances. And it's not just that they flap their wings to slow their descent. Chickens are able to achieve lift – rising into the air. My chickens get up into the rafters by hop-flying from branch to branch. Of course, not all breeds can fly to the same extent. Some breeds are heavier than others, with meat chickens bred to have extra muscle mass which makes it difficult for them to walk, let alone fly. It won't take you very many searches on TikTok, Instagram, or YouTube to find hundreds of videos of chickens soaring through the air.

The saddest misconception for me is the pervasive idea that chickens are unintelligent. It's a sentiment I often hear from my farm visitors. I suspect that the public's belief in chicken stupidity is a defense mechanism developed during our long history of farming and eating chickens. It's far easier to justify eating a stupid animal. But as many backyard chicken owners can attest to, there is a lot more going on in the mind of a chicken than most folks believe. Scientist studying animal minds are well aware of chicken cognitive complexity, but that information is slow to enter public consciousness.

My farm visitors are amazed when I show them my chickens and explain their intricate, individual personalities. Ghost is my friendliest lap chicken and will hop up onto my lap at every opportunity. Dr. Becky is anxious and still keeps her distance from me after all these years. These individual differences in personalities suggest to me (and other scientists) a kind of complex cognition. Most animals—including chickens—have quantifiably distinct personalities; traits like shyness/boldness that remain stable throughout an animal's life. Like humans, some chickens are born more introverted or extroverted, more vigilant or more aloof. Some hens are better, more attentive mothers than others, and some will seek out the affection of their owners whereas others shun physical contact. Chickens, like most animals, are not one-dimensional little robots, but individuals with distinct likes and dislikes, unique thoughts and desires, and diverse ways of interacting with the world.

One of my favorite things to show visitors to my hobby farm is how my rooster reacts when I hand him a yummy treat. His behavior reveals a level of cognitive complexity that is, in my opinion, undeniable. He will gently grab it and drop it on the ground in front of him while making a distinct clucking sound and shuffling his feet it a bit; a behavioral display known as tidbitting. This display is something he does when food is present, and it attracts the attention of the hens who come rushing over to see what the fuss is all about.

For scientists studying animal communication, this food calling behavior is an important precursor to the type of communication that eventually evolved into language for our species. My rooster's clucks are used to refer to the food – with the hens understanding that reference. It is distantly related to the concept of a word as we'd know it for human language. This kind of referential communication is part of chickens' complex communication systems. They have other calls that refer to predators in their environment (called alarm calls), as well as a variety of calls that they make in other situations, like a purring sound when they are happy/content. As many chicken owners know, hens will sing the egg song just after (and sometimes before) laying an egg – a call that might be used to attract attention to themselves (and thus away from their vulnerable egg), or to let their rooster know where they are and what they are up to. Chickens have a complex communication system that hints at a rich inner mental life.

I hope that our collective, renewed interest in keeping backyard chickens will inspire people to think more deeply about chicken behavior and the intelligence of chickens. As I and many visitors to my farm now know, it's almost impossible not to develop a fondness and respect for chickens once they become a part of your life.

Justin Gregg is a Senior Research Associate with the Dolphin Communication Project and an Adjunct Professor at St. Francis Xavier University where he lectures on animal behavior and cognition. Originally from Vermont, Justin studied the echolocation abilities of wild dolphins in Japan and The Bahamas. He currently lives in rural Nova Scotia where he writes about science and contemplates the inner lives of the crows that live near his home. His new book, "If Nietzsche Were a Narwhal: What Animal Intelligence Reveals About Human Stupidity" will be published by Little, Brown in August 2022. More info or to pre-order: https://tinyurl.com/NietzscheNarwhal