Why are fewer children around the world getting vaccinated? 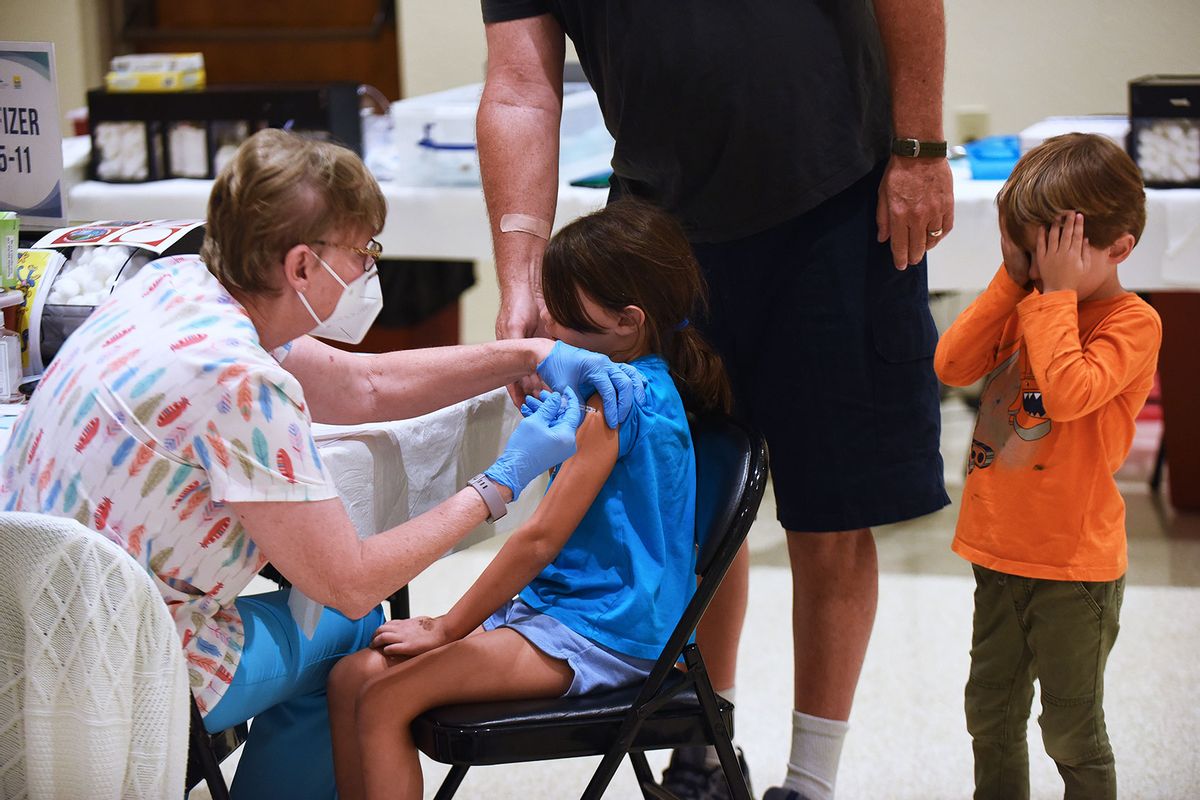 A nurse gives a little girl a shot of the Pfizer COVID-19 vaccine while her brother covers his eyes at a vaccination site for 5-11 year-olds at Eastmonte Park. (Paul Hennessy/SOPA Images/LightRocket via Getty Images)
--

For the first time in nearly 30 years, and despite a century of scientific advancements in vaccine technology, fewer children around the world are receiving routine childhood vaccinations.

The worldwide drop is significant enough that UNICEF executive director Catherine Russell called it "a red alert for child health."

"We are witnessing the largest sustained drop in childhood immunization in a generation,"  Russell added. "The consequences will be measured in lives."

Specifically, UNICEF and the World Health Organization (WHO) estimate 25 million children missed out on one or more doses of the diphtheria, tetanus and pertussis (DTP) in 2021— two million more than those who missed out in 2020, and six million more than in 2019. The three diseases the DTP vaccine protects against are all highly dangerous or even deadly for children if contracted.

"The vaccine hesitancy rates have been creeping up over the years, but that hasn't been as dramatic as the drop that we've seen worldwide in vaccinations."

Of the 25 million children who did not receive a single dose of DTP during 2021, 18 million of them live in low- and middle-income countries, UNICEF's statement said. India, Nigeria, Indonesia, Ethiopia and the Philippines recorded the highest numbers.

International health officials also noted that, worldwide, progress made on mass vaccination against the human papillomavirus (HPV) vaccine has stalled.

"This has grave consequences for the health of women and girls, as global coverage of the first dose of human papillomavirus (HPV) vaccine is only 15%, despite the first vaccines being licensed over 15 years ago," UNICEF said.

"Monumental efforts will be required to reach universal levels of coverage and to prevent outbreaks," their statement continued. "Inadequate coverage levels have already resulted in avoidable outbreaks of measles and polio in the past 12 months, underscoring the vital role of immunization in keeping children, adolescents, adults, and societies healthy."

Unfortunately, the worldwide trend is also mirrored in the United States' own public health data. In April 2022, the U.S. Centers for Disease Control and Prevention (CDC) found that vaccination rates for three childhood vaccines — measles, mumps and rubella, DTP, and varicella — dropped one percent in kindergartners in the 2020-2021 school year compared with the 2019-2020 school year.

"This might not sound like much, but it amounts to at least 35,000 more children across the United States that entered kindergarten without documentation of complete vaccination against common diseases like measles, whooping cough and chickenpox," Dr. Georgina Peacock, head of the CDC's Immunization Services Division, said at the time. Peacock said that because overall kindergarten enrollment dropped by about 10 percent, the number of children in the U.S. without their routine vaccinations could be higher.

So what is actually causing this decline in vaccination rates among children? WHO and UNICEF attributed the drop to a confluence of factors: an increased number of children living in conflict zones, increased misinformation around vaccines, and overall pandemic-related issues.

Dean Blumberg, chief of pediatric infectious diseases and associate professor in the Department of Pediatrics at the University of California–Davis, told Salon he thinks the pandemic exacerbated a trend many pediatricians were already seeing before 2020.

"This decrease in immunization is related to the pandemic, and that's because a lot of the vaccination programs shut down, especially at the beginning of COVID with societal lockdowns, decreased transportation, parents who were worried about going to healthcare centers and clinics because of fear of getting COVID in those settings," Blumberg said. "As restrictions were lifted, there was still so much public health focus on COVID that there were less resources available for public health efforts for immunizations, especially in countries that were poorly resourced."

Blumberg added he has never "seen anything like this" in his career, and that "vaccine hesitancy" is always a concern.

"The vaccine hesitancy rates have been creeping up over the years, but that hasn't been as dramatic as the drop that we've seen worldwide in vaccinations — and then even in the US, there's been a 10 to 20 percent decrease in immunization rates depending on age," Blumberg said. "Fortunately, those have rebounded somewhat, but we're still running below pre-pandemic immunization rates."

Worldwide, the consequences appear to be manifesting in real-time. Most recently this week New York State health officials confirmed the first case of polio in nearly a decade in the United States. Health officials said the case likely came from a "transmission chain from an individual who received the oral polio vaccine (OPV), which is no longer authorized or administered in the U.S., where only the inactivated polio vaccine (IPV) has been given since 2000." However, according to the New York Times, the individual was unvaccinated. The last case of polio in the United States was in 2013 from someone who traveled abroad. A polio case has not originated in the United States since 1979.

"I think one of the things that's been impacted around the world is in terms of decreased immunizations is polio immunizations, and that's led to more polio cases occurring in the previous 12 months, and that's a huge concern," Blumberg continued. "The U.S. is always at risk for an imported case, we don't have circulation in general in the U.S., but if immunity levels get low enough, then polio cases, whether they're the wild type or derived from vaccine strains, can start circulating here."

While the age of the individual with polio is unknown, lack of childhood vaccinations can cause such outbreaks.

"We know that some vaccine-preventable diseases that normally occur at low rates that they can flare up — like whooping cough or pertussis," Blumberg said, adding that the measles is also like a "canary in the coal mine" in some communities where immunization rates are low. "It is so infectious that once you get immunization rates below 95% in a community, when a case is introduced, you can get sustained transmission, so I think we're just waiting for that to happen."