All is not completely lost in the Netflix adaptation, thanks to some unlikable minor roles

Watching the new Netflix adaptation of Jane Austen's "Persuasion," with Dakota Johnson in the lead role of Anne, is like being trapped in a theatre with locked doors when a community production starts to go terribly wrong.

I've been in the audience when the set of "The Importance of Being Earnest" fell down. I've been on stage when someone skipped dozens of pages in "The Curious Savage" and the story stopped making sense. I've been backstage when a ballerina was hit in the face by a coat hanger that plummeted with the falling snow of "The Nutcracker" (the plastic snow was expensive and so they swept it up and reused it every night, you see).

It's hard to pinpoint exactly what's happening with "Persuasion," though many have gamely tried. So many luminous stars, including Johnson and the wonderful Richard E. Grant, and yet not much shining. Such rich source material, and yet an adaptation that has sucked much light and sense from its story, disappointing and infuriating Austen fans.

Let's focus on the positive. There are some compelling characters here who draw our attention away from the disaster happening center stage; they're simply not supposed to.

How "Fire Island" puts the Pride in "Pride & Prejudice"

"Persuasion" centers Anne Elliot (Johnson), the middle daughter of a family who, seeking to save money thanks to the lavish lifestyle of their patriarch (Grant), must rent out their home and move into cheaper lodging. Their renters are an Admiral and his wife whose brother, Navy Captain Frederick Wentworth (Cosmo Jarvis), was once engaged to Anne years ago.

Anne was "persuaded" (wink, wink) to break off their engagement back then due to Wentworth's then-low prospects. He's rich now, though (thanks, Navy!), and circumstances may be bringing the two back together.

Sadly, the rabbit does not have a role which benefits its station.

Grant's Sir Walter Elliot vainly primps in sheer delight, but doesn't have screen time to save everyone in this story. In Netflix's version, for some reason, our heroine Anne is a drunk who talks to the camera a lot. For some other reason, she has a pet rabbit. Sadly, the rabbit does not have a role that benefits its station. The music has more chemistry with the scenery, the carriage wheels have more chemistry with the road, than any person has with any other person.

That said, as Vox wrote, the adaptation gets a "jolt of energy" when Henry Golding's Mr. Elliot, Anne's wealthy heir cousin, shows up to provide the third side of the love triangle between Anne and Wentworth. 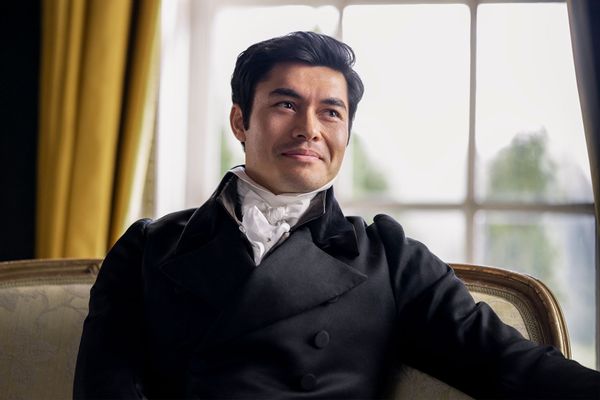 His angle is that he could definitely be a cult leader.

Vox describes Golding as being "in pure mustache-twirling villain mode," though Golding's mustache is faint and the villainy even fainter. It's a watered-down role from the source material, but despite his dour black attire, Elliot stands out. Do Elliot and Anne have chemistry? No. (In fairness, Anne and Wentworth don't have chemistry, either). But Golding's Elliot has a fling with the camera, smirking at it like he knows some secret we don't, perhaps when this movie will be blissfully ending. Elliot smolders, barely contained by a cravat, whether blocking the path when Anne is on a walk with her family, or entering a room.

"Anyone that attractive must have an angle," Anne says. His angle is that he could definitely be a cult leader, and seems to be acting, compellingly, in his own private movie. He's not the only character who appears to be in a different, perhaps better, story.

Mary unwittingly serves as a kind of Greek Chorus for the viewers, voicing what everyone is thinking: wow, this is terrible.

Nowhere is this more painfully clear than in the character of Mary Musgrove, Anne's younger, married sister. Mia McKenna-Bruce plays this role like she's Corky St. Clair, and producer Mort Guffman has actually showed up to his saved seat and will spirit her off to Broadway if she only sings her heart out in "Red, White and Blaine." In other words, she's flawless. 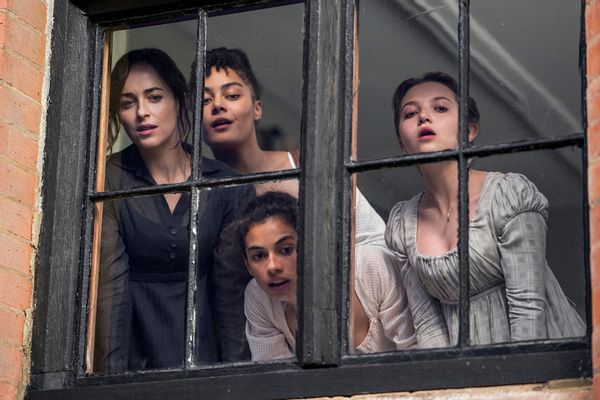 Dakota Johnson as Anne Elliot, Izuka Hoyle as Henrietta Musgrove, Nia Towle as Louisa Musgrove and Mia McKenna-Bruce as Mary Elliot in "Persuasion" (Nick Wall/Netflix)Her impeccable Mary is a complaining, bitter hypochondriac. In Netflix's production, she unwittingly serves as a kind of Greek Chorus for the viewers, voicing what everyone is thinking: Wow, this is terrible. "I'm so close to death," she says in tight-lipped, throaty seriousness. We are too.

Mary is sarcastic, dour and hilarious. A young mother, she's also a reluctant one, constantly complaining about being stuck with the children. Yes, her children. McKenna-Bruce does more with an eyeroll than "Persuasion" does with hours (well, it feels like it) of uneven dialogue. "I can't endure the sound of laughter before noon," she pouts perfectly. Not to worry: This film will ensure one doesn't have too much of that.

Mary's marriage with Charles (Ben Bailey Smith) is also a bright spot. Sure, Mary was his second choice after Anne, a fact the story brings up repeatedly (as it does with Anne's alleged plainness, which makes little sense in Johnson's portrayal). But Mary and Charles are playful together. Charles seems more than gamely resigned to the other, lesser Elliot sister; he seems happy, toting Mary around after she tires of walking like a sack of potatoes, belligerent but beloved.

Charles and Mary make the best of a consolation marriage, as Smith and McKenna-Bruce, like Golding, do their very best with this material. It's probably better than the adaptation deserves.

"Your noble relations disappoint you," Anne is told in the film. Yet it's those relations who steal the show, what there is to steal. Watch "Persuasion" at your own risk. But do so with a view toward the minor, so-called unlikeable characters, whose performances prove there's nothing minor about them.