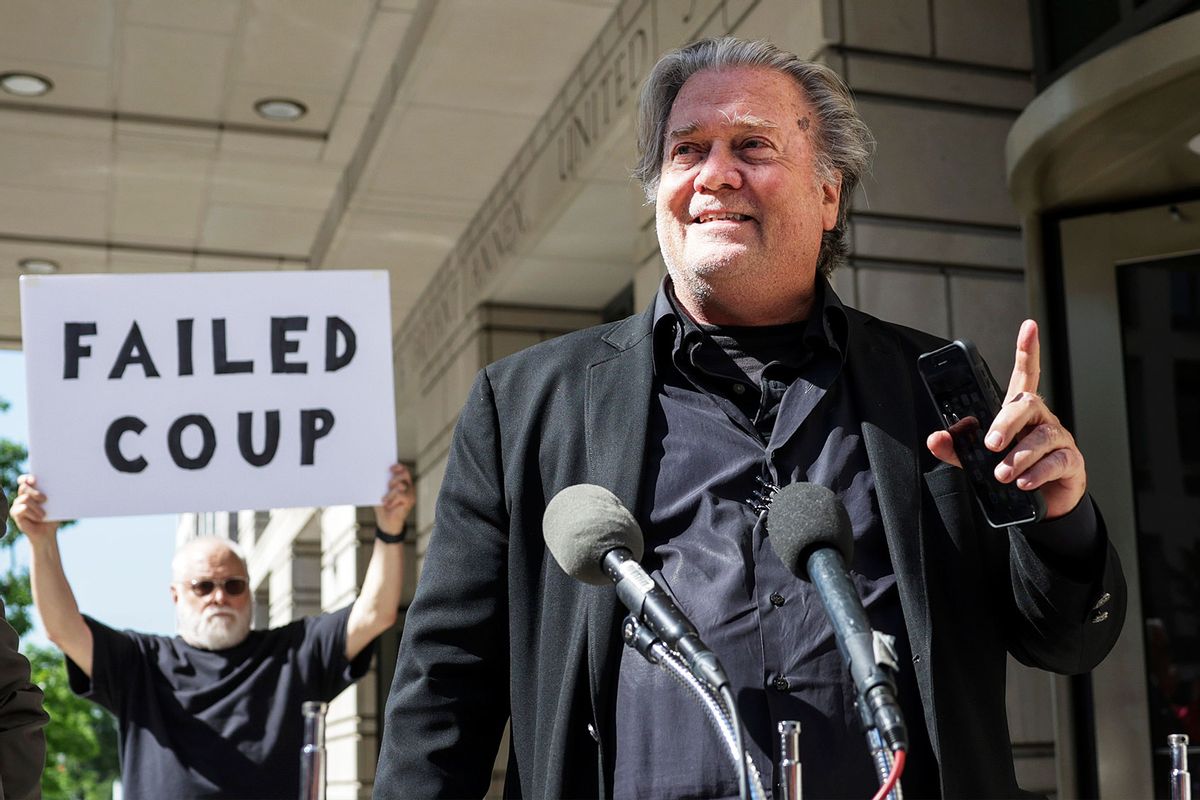 Steve Bannon, advisor to former President Donald Trump, speaks to the media as a protester stands behind him, outside of the E. Barrett Prettyman U.S. Courthouse on June 15, 2022 in Washington, DC. (Kevin Dietsch/Getty Images)
--

A federal jury, after less than three hours of deliberation, found Bannon guilty of contempt of Congress on Friday for his refusal to answer a subpoena from the House committee investigating January 6. As soon as the verdict was in, Bannon ran straight to Fox News to guest on a segment of "Tucker Carlson Tonight" that had the vibe of an alt-right party at 4AM, when the old head is ranting while the young ones try to figure out how to buy more cocaine with crypto.

"I support Trump and the Constitution and if they want to put me in jail for that, so be it," Bannon raved, swearing revenge on the January 6 committee.

Bannon, as usual, is using bluster to intimidate the legal authorities out of holding him accountable for his role in Donald Trump's attempted coup and his ongoing efforts to overturn democracy. Clearly, he wants them to envision Adolf Hitler in the 1920s, when he used his time in prison after the Beer Hall Putsch to write "Mein Kampf" and gather more support for the fascist cause. Bannon wants law enforcement to see him as a martyr for Trumpism, someone whose speckled visage will become an icon of the movement that will rally supporters, creating even more momentum for 21st-century American fascism.

No one should feel intimidated. Steve Bannon is not Adolf Hitler and this is not 1920s Germany, despite many admittedly alarming parallels between now and then. For one thing, Hitler was a healthy man in his mid-thirties, one who had actually put himself in the fray during the attempted insurrection. Bannon, on the other hand, is a decrepit 68-year-old. Despite all of his big talk behind the microphone, Bannon has yet to actually put himself in any physical danger for his fascist beliefs. More importantly, Bannon's been declaring for months that he will be a martyr for the cause and that attempts to hold him accountable will only make him stronger. So far, the opposite has been happening, and there's no reason to think things will change if or when Bannon sees the inside of a prison cell.

There's a lesson in this that could be applied to the entire pantheon of Trumpist leaders: They talk a big game, but if they face real consequences, they turn out to be paper tigers.

If only more of them were actually prosecuted for their crimes, we'd find a mob of Steve Bannons. Behind the microphone, they are mighty warriors. But when facing actual consequences, they've got nothing.

Bannon is a talented propagandist. With Trump's help, he was able to remake the GOP in the image of the site he used to run, Breitbart.

When Bannon was first arrested, his bluster about how he was going to turn this into a recruitment opportunity for his fascist cause was genuinely frightening. After all, Bannon is a talented propagandist. With Trump's help, he was able to remake the GOP in the image of the site he used to run, Breitbart. So when he started to paint a picture of how he would use this trial to champion his cause, much as Hitler used his trial for treason to build up his public image, smart people were reasonably worried. Salon's own Heather "Digby" Parton even wrote at the time that "being indicted for defying Congress is the best thing that ever happened to him" and that Bannon may "turn any trial into a spectacle in order to foment more chaos."

I'm not blowing up Digby's spot, I hope. I'm sure she's as grateful as I am that none of this happened. As she wrote more recently of Bannon's efforts to escape consequences, "Usually arrogant and full of bravado, Bannon does seem to be scrambling."

Bannon didn't use the trial as he initially envisioned, as an opportunity for grandiose speech-making, à la Hitler in 1924. Unlike Hitler, who had a sympathetic judge, Bannon found himself facing a judge who wasn't interested in fascist grand-standing. Instead, Judge Carl Nichols was so effective at shutting down the defense's trollish hijinks that Bannon's lawyer complained, "What's the point in going to trial here if there are no defenses?" Eventually, the defense went with a failed "no defense" strategy of offering no witnesses or evidence, which is just as well, because Bannon probably didn't have any worth considering.

Steve Bannon found guilty of contempt, faces up to 2 years after his defense strategy backfired

During last Thursday's January 6 hearing, the committee played a video that showed the aftermath of Sen. Josh Hawley, R-Mo., and his infamous raised fist encouragement of the January 6 insurrectionists. The video shows Hawley running for his life from the rioters after they breached the Capitol. The choice to play the video was largely received by the press as gratuitous mockery of Hawley, though most everyone agrees he deserves it.

Presenting the evidence against Trump has weakened his hand.

In truth, the committee was likely doing something both sly and profound with the video: Reminding both the public and, crucially Attorney General Merrick Garland, that if you peel back the bravado of authoritarian bullies like Hawley and Bannon, you'll find empty-headed cowardice. It underscores why it's important not to be intimidated by the braggadocio, but instead to take these folks head on. Often, as with Bannon, one finds that they don't simply don't have some secret reserve of power to draw on, just hot air.

Bannon's not even the first example of this.

During the coup itself, Trump's lawyer Sidney Powell loved to brag into any microphone stuck in her face that she planned to "unleash the Kraken," i.e. bury Joe Biden's electoral victory in so many lawsuits that Biden's win would simply crack in half and, presto bingo, Trump would be able to stay president. But it turns out that you can't sue an electoral victory into oblivion like you're dealing with a contractor you stiffed on a bill. Trump's team did, in fact, file a dizzying number of lawsuits, and one by one, they all failed to make a dent in Biden's victory. Now Powell is facing a defamation lawsuit and she's been frozen out by Trump, who has no loyalty to return to those who serve him.

We see a similar situation play out, over and over again, with the people who actually rioted at the Capitol on January 6.

As has been remarked on by many at length, the insurrectionists ended up creating most of the evidence used to convict them, by filming themselves and posting the videos and photos of the riot online. Flush with white privilege and high on Trump's encouragement, most of these folks didn't stop to consider the possibility of consequences for their actions. As they are churned through the court system and found guilty of their crimes, they often blubber in disbelief, the fascist warrior front dissolving to reveal the crybaby underneath.

Of course, as the Capitol insurrection shows, these folks are indeed very dangerous, if their violent impulses and authoritarian longings remain unchecked.

Over the weekend, Dave Weigel at the Washington Post published a deeply disturbing piece chronicling how widespread the fascist incitement from Republican politicians has become. "[C]andidates are brandishing firearms while threatening harm to liberals or other enemies," Weigel writes. They are painting Democrats and progressive activists as an existential threat that must be extinguished with violence.

This reality only underscores the need for more legal consequences for Trump and his allies for the insurrection. The failure of the Department of Justice to prosecute Trump for any of the many crimes he committed while conducting his coup sends a message to other Republican politicians: Instigate as much violence as you want, no one will do anything about it. Sure, they may throw the people who actually commit violence at your urging in jail, but there will be no penalty for you for inciting violence or taking other criminal actions to destroy democracy. Until that message changes, this situation will only get worse.

Malcolm Nance on the Trump insurgency: Jan. 6 was a "template to do it correctly next time"

Trump has successfully created the illusion that he's untouchable, which has the unfortunate effect of making him actually untouchable. All too many people, eager to make excuses for the DOJ's reluctance to prosecute Trump, have settled on claims that doing so will somehow just make Trump stronger, by turning him into a martyr for the cause. But the January 6 hearings show the opposite to be true. Presenting the evidence against Trump has weakened his hand.

While most Republicans would rather stick by Trump to the bitter end, rather than admit liberals were right all along, at the margins, Trump has been losing steam. Even 1 in 4 Republican voters now agree that Trump should probably face prosecution. Polling shows a significant number of Republican voters are hoping for a different candidate in 2024. Even parts of Rupert Murdoch's media empire are souring on Trump.

It's easy to tell a story where the bad guys are too powerful to defeat. That excuses inaction and rewrites cowardice as rationality. The reality, however, is that these big-talking fascist pigs all too often turn into squealing piglets when confronted with consequences. If you doubt it, look again at Steve Bannon. What was supposed to be his Trial of the Century ended with a whimper. Maybe it's true, and the fascists will win sometimes if the good guys fight back. But, so far, they win every time that the good guys just stand down.

The Josh Hawleys of the world love to pump their fists and act like big men. But if you actually give them chase, they run.