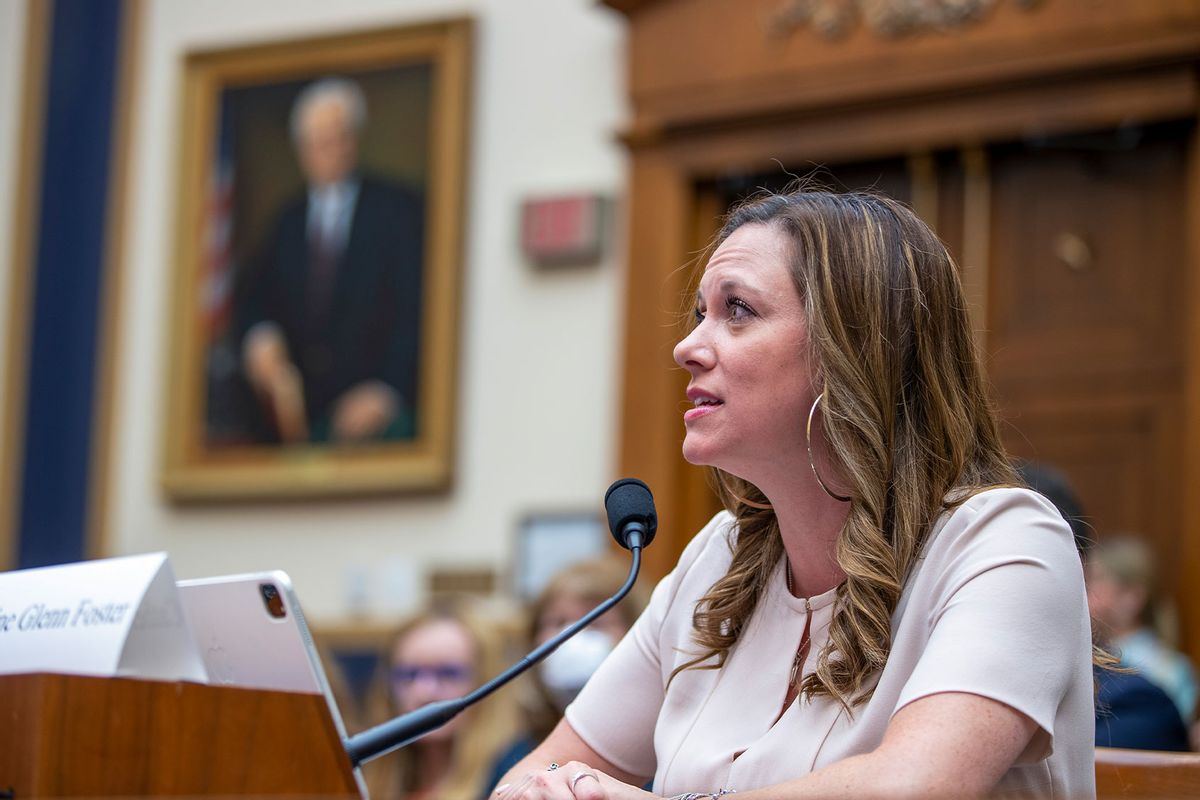 Catherine Glenn Foster, President & CEO of Americans United for Life speaks during a hearing of the House Judiciary Committee on Capitol Hill on July 14, 2022 in Washington, DC. (Tasos Katopodis/Getty Images)
--

In the wake of the overturn of Roe v. Wade, the horror stories about what happens when you ban abortion have quickly piled up. Women are bleeding out from miscarriages because doctors cannot abort a failing pregnancy unless the patient is on the verge of death. A 10-year-old girl was forced to travel hundreds of miles to avoid giving birth to a rapist's child. Patients with ectopic pregnancies, which are always unviable, are seeing care delayed and denied, risking their lives and their fertility.

And in the face of all of this suffering, what is crucial to remember is this: This was always the point.

Abortion bans are meant to cause pain and suffering. They act otherwise, but anti-choice activists are not surprised by any of these horror stories. The misogynist sadism that fuels the anti-abortion movement has never been limited to punishing women for having sex for pleasure rather than procreation. Maiming — and even killing — women who wanted to be pregnant was always part of the plan. Forcing victims to give birth to a rapist's child was always a guiding impulse.

We can know this because anti-abortion propaganda is awash in stories romanticizing dead and maimed women, whose "sacrifice for the unborn" causes right-wing hearts to pitter-patter. Christian conservative media loves nothing more than a woman dead from childbirth, and it's no wonder. A dead woman embodies the right's ideal of femininity: silent and compliant, with no desires of her own.

Post-Roe gaslighting: The party of QAnon denies the very real rape of a 10-year-old

The only woman they love nearly as much as a dead one is a rape victim submitting to childbirth. Such a woman may not be entirely silent, but she meets the right's ideal of total female self-abnegation, a complete embrace of her role as a servant and vessel for the desires of others. As for those women who don't want to sacrifice themselves? They are deemed "selfish," which only justifies forcing the sacrifice upon them.

Republicans can't win the abortion argument on the merits. Instead, they flood the discourse with bad faith, lies, victim-blaming deflections and conspiracy theories.

Glowing stories of mutilated female bodies and submissive rape victims are mainstays of anti-abortion propaganda. But most conservatives aren't dumb enough to think the majority of the country swoons at stories of pointless female suffering. On the contrary, the GOP is experiencing a political stomachache in the face of such stories flowing from the Supreme Court decision in Dobbs v. Jackson Women's Health. But not so much that they're willing to back down from these horrific abortion bans, of course. Restoring women to second-class citizen status is too important a political goal to simply give up on just because the public is reeling over its bloody impacts.

Still, they do want to find a way to make septic pregnancies and child rape victims less politically damaging to the GOP's midterm prospects. And Republicans already have an existing playbook for how to stand by unpopular, deadly policies, even in the face of widespread public revulsion. It is the one they use to get through the now-routine mass shootings caused by lax gun laws they support.

The GOP's mass shooting playbook is built on a true, if nihilistic premise: People will grow accustomed to all manner of evil, so long as they're sufficiently demoralized.

All that needs to be done to get the public to accept mass death and destruction is to strip away any hope of change. Eventually, the public grows numb and starts tuning out the horror stories, since there's no point in getting outraged over something you are powerless to stop. With that in mind, the political strategy is simple. Republicans can't win the abortion argument on the merits. Instead, they flood the discourse with bad faith, lies, victim-blaming deflections, and conspiracy theories, wearing people out until despondency kicks in and people give up fighting back entirely.

For decades now, Republicans and the gun industry have mastered the art of deflecting blame for mass shootings through one simple pivot: Blaming the victims for their own deaths. This usually comes in the form of the "good guy with a gun" argument, in which Republicans claim that if only the victims of the mass shooting had returned fire, they would have been saved. Victims are also blamed for not locking doors or having military-style self-defense training to prepare for a trip to school or the grocery store. Not only are these arguments false, they're morally reprehensible, as the implication is that ordinary people should have to live as if they were in a war zone. But they have been successful at convincing most voters that nothing will ever change and mass shootings are just a thing we have to live with now.

On the abortion front, the blame-the-victim strategy is manifesting as claims that doctors are somehow "misinterpreting" abortion bans if they fear legal consequences for terminating miscarrying or ectopic pregnancies.

In the National Review, Alexandra DeSanctis was blunt in her victim-blaming, writing "it is the fault of the doctors themselves, not the fault of the pro-life laws" if abortion bans prevent doctors from helping patients with failing pregnancies. John Seago of Texas Right to Life worked the same false claim in a comment to the New York Times, blaming "a breakdown in communication of the law, not the law itself" for denials of miscarriage care under abortion bans.

This victim-blaming is, of course, also flat-out dishonest.

In the very same interview with the New York Times, Seago ended up admitting the Texas law requires doctors to deny miscarriage care until the fetus has fully died on its own, even though doing so means forcing patients to endure sepsis that can cripple or kill them. And, as Slate's legal expert Mark Joseph Stern carefully laid out on Twitter, DeSanctis's lengthy article is also a bunch of nonsense, as "doctors who terminate a pregnancy because of a medical emergency may face lawsuits" where the burden of proof is on them to show that an abortion was necessary to save a patient's life.

Needless to say, the right-wing lawyers who will bring forward such lawsuits will deny that the abortions were necessary, and count on the fact that most jurors aren't medical doctors to confuse them on the facts.

All that needs to be done to get the public to accept mass death and destruction is to strip away any hope of change.

The anti-choice community is also rapidly developing its own version of the "false flag" conspiracy theories that proliferate on the right after a mass shooting. With shootings sites like Infowars push false stories a shooting is staged by the "deep state" to increase political support for gun control. In real-time, we can now see a similar accusation rising up on the right with regards to abortion, as Stern documented.

Faced with a steady stream of horror stories about the impact of abortion bans on patients suffering failed pregnancies, anti-abortion advocates have retreated into a paranoid conspiracy theory that doctors are trying to "create viral stories making abortion bans look culpable." pic.twitter.com/RapvDOqRVg

The embrace of disinformation and noise to deflect attention from reality was likely inevitable. The modern GOP operates exclusively through mendacity. This iteration of the strategy really kicked off after a report of a 10-year-old rape victim being forced to travel for an abortion became national news. Right-wing media made a bet that, due to the low reporting rates for rape and medical ethics regulations preventing doctors from sharing private patient information, verifying this story would be difficult — and then used that as cover to falsely accuse the doctor of lying about the story. When the doctor's account was vindicated by reports that this was one of those rare rape cases with an arrest, there was no apology or backing down. Instead, conservatives pivoted to telling more lies about the doctor. Catherine Glenn Foster of Americans United for Life, in a true show of shamelessness, even denied that aborting a pregnancy in a 10-year-old is an abortion.

Foster isn't dumb. She knows that the process of aborting a pregnancy in a child rape victim is the same as aborting a pregnancy in a 25-year-old who had consensual sex — and that both are banned under Ohio's stringent abortion law. She's playing games with the word "abortion," invoking the way it connotes sexual stigma to avoid talking about the legal and medical definition of the word. But, of course, abortion is defined as terminating a pregnancy. That is what these laws ban, regardless of whether you're a rape victim or you are experiencing an incomplete miscarriage.

Foster's glibness tells the whole story. She doesn't care about child rape victims. All she cares about is bullshitting her way through the next few minutes, days, or months — however long it takes for the public's unsustainable outrage to fade into acquiescence. After all, the maimed women and retraumatized rape victims are a feature, not a bug, of abortion bans. The central animating belief of the anti-choice movement is that women were put on this Earth to submit and sacrifice, and so women's death and pain are necessary.

Most Americans don't agree, but no matter. Republicans learned from gun violence that the public can be made to accept all amounts of misery and death, so long as they're drained of hope that things could ever be better.