Great Salt Lake "not that far off" from an ecosystem collapse: Toxic dust storms, die-offs loom

As the Great Salt Lake continues to dry up, the ecological future of the region may be bleak 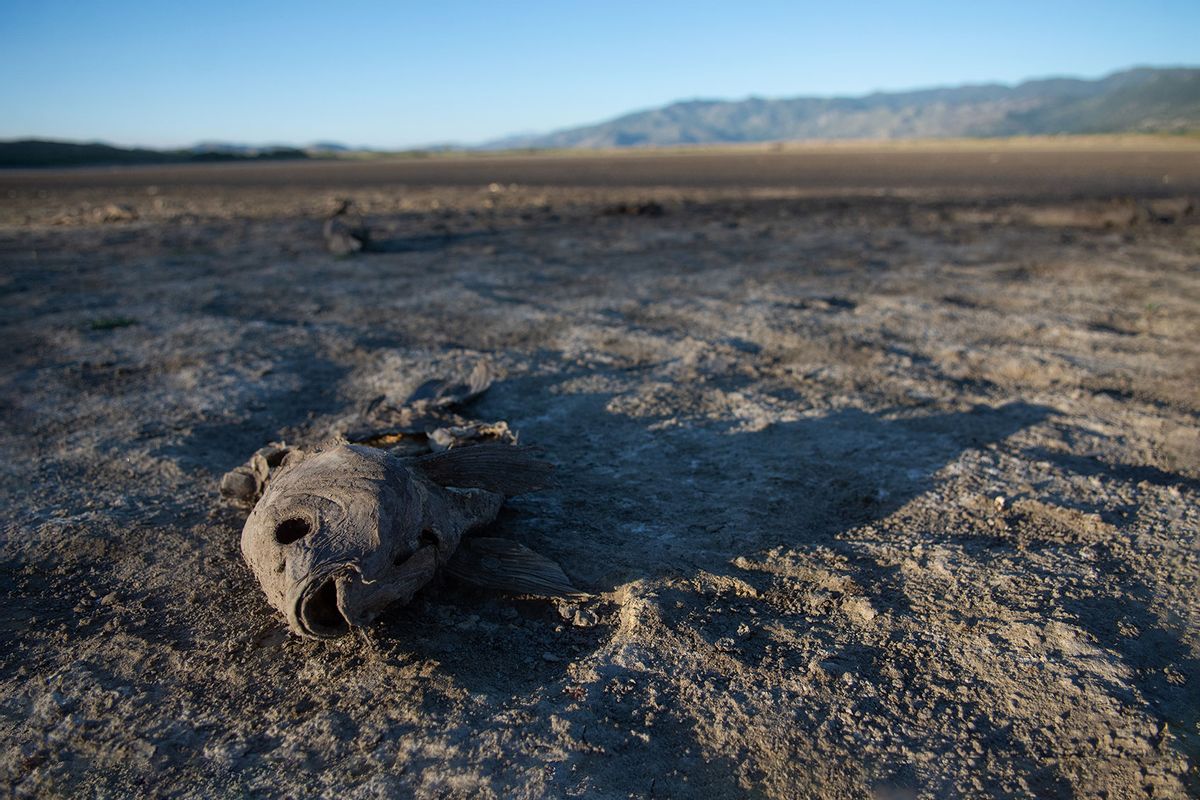 Dead fish on the dry lake bed of Little Washoe Lake on July 15, 2021 in Washoe City, Nevada. According to the Nevada Department of Wildlife, the lake dried up because of prolonged drought. Water levels were also adversely affected by a 2017 storm that washed out a diversion on Brown creek. (David Calvert/Getty Images)
--

Kentucky bluegrass adds a touch of green to the dusty Northern Utah landscape, an area with little summer rainfall. Yet despite the paucity of water from the sky, the residents of Utah use more water per person than almost anywhere else in the country — and only a quarter of that water ever makes it inside.

Two decades into a megadrought, water irrigation keeps manicured lawns and fields alive in the middle of the desert. Yet dust storms have become a growing problem for human health and the health of ecosystems. Only a briny crust and sparse plants may soon remain of the Great Salt Lake. Indeed, as water levels drop in the shallow terminal basin, heavy metals and toxins accumulate in their place in the ancient lakebed. Now, experts fear that the drying lake's accumulated dust — some of it toxic — could blow across the region, potentially entering the bodies of the people living there in the process.

Human activity has already led to a generally dustier world, but in naturally dry climates, the effect is amplified. The Great Salt Lake sits in a rain shadow, which is at least partially responsible for the lake's salinity; indeed, almost any moisture in the air precipitates before it ever reaches more than 2 million residents in metropolitan areas. Instead, the Salt Lake region's residents rely on snowmelt from the Wasatch Mountains, where far less snow has accumulated in recent winters. Another source of dust may seem insignificant, but along the Wasatch Front, where two-thirds of the state's population lives, the Great Salt Lake has the potential to add more hazardous contaminants to the mix.

"It's on our doorstep, and when it does blow, it impacts everybody along the Wasatch Front," Dr. Kevin Perry told Salon.

But just because the lakebed has contaminants in it doesn't mean they will necessarily blow into the environment. That depends on erosion.

In 2016, the University of Utah atmospheric scientist set out to determine if a briny crust and vegetation will keep contaminants and sediment alike contained and hold toxic dust plumes at bay. Perry spent the next two years biking across exposed areas of crust to document potential "hot spots" where loose soil could become airborne.

Utah was not spared from record heat last summer, and neither was the Great Salt Lake. The shallow terminal lake shrank to 950 square miles, nearly half its historical size.

In the drought-stricken state, public officials often perceive water entering the Great Salt Lake as water that is wasted. The very salt that makes the lake water unfit for human consumption may be a saving grace when it comes to holding in its dust and contaminants. While other dry lake beds, called playa, often become significant dust generators, Great Salt Lake remains an outlier. Unlike most other playa, which typically lack a salt crust, Great Salt Lake's sediment remains, for the most part, in the ground.

With historically low water levels in rivers and streams, Utah has been in a drought for eight of the last 10 years. Utah was not spared from record heat last summer, and neither was the Great Salt Lake. The shallow terminal lake shrank to 950 square miles, nearly half its historical size. As Utah braces for another summer of extreme drought, experts expect the Great Salt Lake will soon hit another record low.

With water levels remaining low on the Great Salt Lake, thinner areas of the crust are becoming more susceptible to erosion. If the trend continues, 22% of the natural salt crust could disappear, and dust from the lake could become a real problem. In an assessment prepared for the Utah Department of Natural Resources and Utah Division of Facilities Construction and Management in 2019, Perry reported that only 9% of the exposed lakebed were hotspots at the time.

Since then, graduate students working with Professor Brahney have been monitoring the situation on the ground. According to Ph.D. student Molly Blakowski, hot spots have been growing in the last few years.

Even at lower levels, dust poses a health hazard to people with respiratory conditions such as asthma. When high winds kick up a lot of fine sediment, smaller particulate matter can enter the bloodstream of those who inhale it.

"These sites are becoming dustier and dustier, and last year was by far the dustiest year of our study," Blakowski asserted in an interview with Salon. "I don't have any reason to expect that this year won't be the same or worse."

Even at lower levels, dust poses a health hazard to people with respiratory conditions such as asthma. When high winds kick up a lot of fine sediment, smaller particulate matter can enter the bloodstream of those who inhale it. For that reason, the Environmental Protection Agency sets limits on particles measuring 10 microns or smaller — less than half the size of a human white blood cell.

Blakowski added, however, that dust particles from the Great Salt Lake mostly measure around 30 microns. While the exact health impacts of exposure remain unknown, these dust plumes can make air quality unbearable, forcing people to take shelter inside more often and decreasing the overall quality of life.

Professor Janice Brahney of Utah State University, who advises Blakowski's research, told Salon that the danger is a matter of proximity to the Great Salt Lake.

"Millions of people that live in the watershed contribute to the pollution that drains into the lake and can bind to the sediments," said Brahney. "That also means that those same people are exposed to the dust when it's produced in the toxins that are in that dust."

Not only does runoff from metropolitan areas also carry contaminants, but it may well fuel the synthesis of other toxins in the lake itself. Algal blooms that thrive on agricultural and industrial waste in Great Salt Lake host bacteria that produce cyanotoxins have become increasingly prevalent. At the Environmental Biogeochemistry and Paleolimnology Laboratory, Dr. Brahney and her colleagues found that cyanotoxins in the lakebed may also enter the lungs of residents.

With more than 1.2 million people already, Salt Lake City's metropolitan area alone accounts for a third of Utah's population and will likely double by 2060, both contributing to the problem and suffering the consequences. Still, it is unclear what health impacts more frequent exposure would have on residents. Brahney emphasized that a growing list of contaminants should spur action nonetheless.

Although drought has put a large burden on the lake, the problem is largely an artificially created one. Without current diversions, it is estimated that the Great Salt Lake would be 11 feet higher. According to Zachary Frankel, of the Utah Rivers Council, diversion of the Bear River, effectively the last major water source for the Great Salt Lake, would ensure its total desiccation.

"The proposed diversion of the Bear River upstream of the Great Salt Lake would be the real knife into the patient," he told Salon.

The Bear River Development has remained merely a proposal since legislators approved it in 1991, but millions of dollars are spent annually to continue to advance it, despite the ramifications of the project.

When the dust settles on snow, it makes it darker. Because darker snow can absorb more sunlight instead of reflecting it, it heats up faster and melts earlier. With less surface area, there will also be less "lake-effect snow," as the phenomenon is called. Both impacts are detrimental to water resources and a skiing industry that advertises the "greatest snow on Earth."

"We're not that far away from a tipping point to where the Southern part of the lake will become so salty that the brine shrimp won't be able to survive," Perry explained, adding that "ecosystem collapse" would follow.

Perry expects that a mass die-off not just for salt-tolerant species of the lake but also for some 10 million migratory birds that feed on them would be likely. Native plants and animals already struggle to survive, and climate scientists expect the American West will only become drier as the Earth heats up. Climate change has already contributed to later snowfall, earlier melt, and lower accumulation.

Although ranking second in the nation behind Idaho for municipal water use per person, Utah is fairly average when it comes to overall water consumption. Municipal use only takes up 10% of the state's water supply, while 85% is used for agriculture. Alfalfa farming takes an especially large sip of the water supply, but as Dr. Wayne Wurtsbaugh noted in an interview with Salon, there's no water quality standard to protect water itself.

"You can take all the water out of the stream and decimate all the organisms in there, and that's okay in terms of water quality," he explained, underlining a major flaw in EPA standards.

on water and climate change