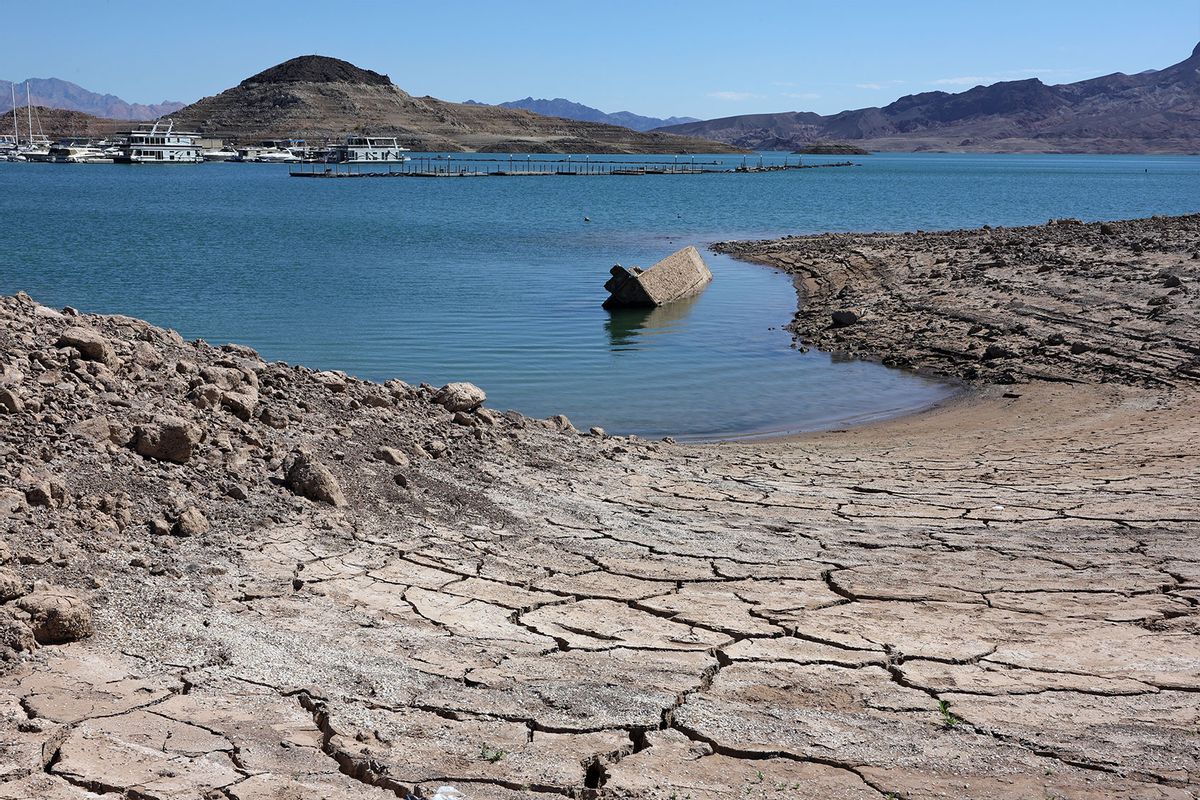 A sunken World War II-Era Higgins landing craft that used to be nearly 200 feet underwater is being revealed near the Lake Mead Marina as the waterline continues to lower on July 01, 2022 in the Lake Mead National Recreation Area, Nevada. (Ethan Miller/Getty Images)
--

As sea levels continue to rise as climate change accelerates, experts in coastal cities are planning accordingly. From New York City to New Orleans, policymakers who live near the ocean seem to be gradually recognizing their "The Day After Tomorrow"-esque peril. Yet according to a new study in the scientific journal Nature Communications — one that an outside scientist praised for looking "at the impacts of evaporative loss in an entirely new way" — people who live near lakes may have just as much cause for climate change-related water concerns as those who dwell near the sea.

That, in turn, means everyone else will also need to worry.

In research led by a team of scientists at Texas A & M University, the scholars accumulated data from more than 1.42 million natural lakes and reservoirs all over the planet. Their goal was to assess whether lakes have lost water over a one-third-of-a-century period stretching from 1985 to 2018. As it turned out, long-term average lake evaporation has increased at a rate of 3.12 cubic kilometers per year, including increases in the evaporation rate (58%), a decline in lake ice coverage (23%) and an increase of lake surface area (19%).

"There are several major conclusions in our work," Dr. Huilin Gao, Texas A&M University College of Engineering, told Salon by email. Gao mentioned that the global lake evaporation volume is "15% larger than previously thought" thanks to their research. In addition, "we have quantified that this volume has been increasing at a rate of 3.12 km3/year and such an increasing trend is caused by not only the increase in evaporation rate but also lake ice melting and lake surface area increase."

"'The practical consequences for most people will be that their water resources could be better managed in the future, as the effects of climate change become more acute,' Rynearson told Salon."

Yet climate change alone is not to blame for the loss of lake water. "The lake surface area increase is mainly caused by reservoir construction in the past 30+ years," Gao pointed out.

Tatiana Rynearson, an American oceanographer at the University of Rhode Island who was not involved in the study, praised it for examining "the impacts of evaporative loss in an entirely new way." Rynearson told Salon that "by examining how the evaporation volume of lakes is changing over time the authors generated a metric that policy makers and water quality managers can use."

Given that every human drinks and uses water, the study is of direct concern to everyone.

"The practical consequences for most people will be that their water resources could be better managed in the future, as the effects of climate change become more acute," Rynearson told Salon. "These could be local resources like domestic water use and could also include more distant resources, like those used in agriculture that produces food distributed across the nation or the globe." Rynearson noted that the study's authors have also created metrics "that will be used in earth system models which means that we could have better climate forecasting of rainfall, temperature and humidity levels."

Until recently it has been difficult for scientists to make robust projections about how climate change will hurt surface fresh water bodies because there has been a dearth of useful data. Yet as the study itself notes, roughly 87 percent of all the Earth's fresh surface water exists in either natural or artificial lakes, meaning that policymakers will likely have to figure out how to preserve these precious resources. That is just one more reason why the rapid loss of water within those lakes is ultimately a global problem.

"Such a high volume of evaporative water loss from lakes and reservoirs has direct connections with local water availability, especially during drought in the arid and semi-arid regions," Gao told Salon. "Such [a] phenomenon can reduce the available water for irrigation, water supply, and hydropower purposes and thus pose challenges to policymakers to manage water-food-energy more efficiently."

When asked if there are any government policies that could solve this problem, Gao explained that "we think the best way to reduce such a problem can be done via international collaboration to mitigate human-induced climate change." He added that "in our work, we found that the increase in evaporative water loss is largely caused by global warming, which not only increases the evaporative rate but also decreases lake ice."

For more Salon articles on climate change and water: