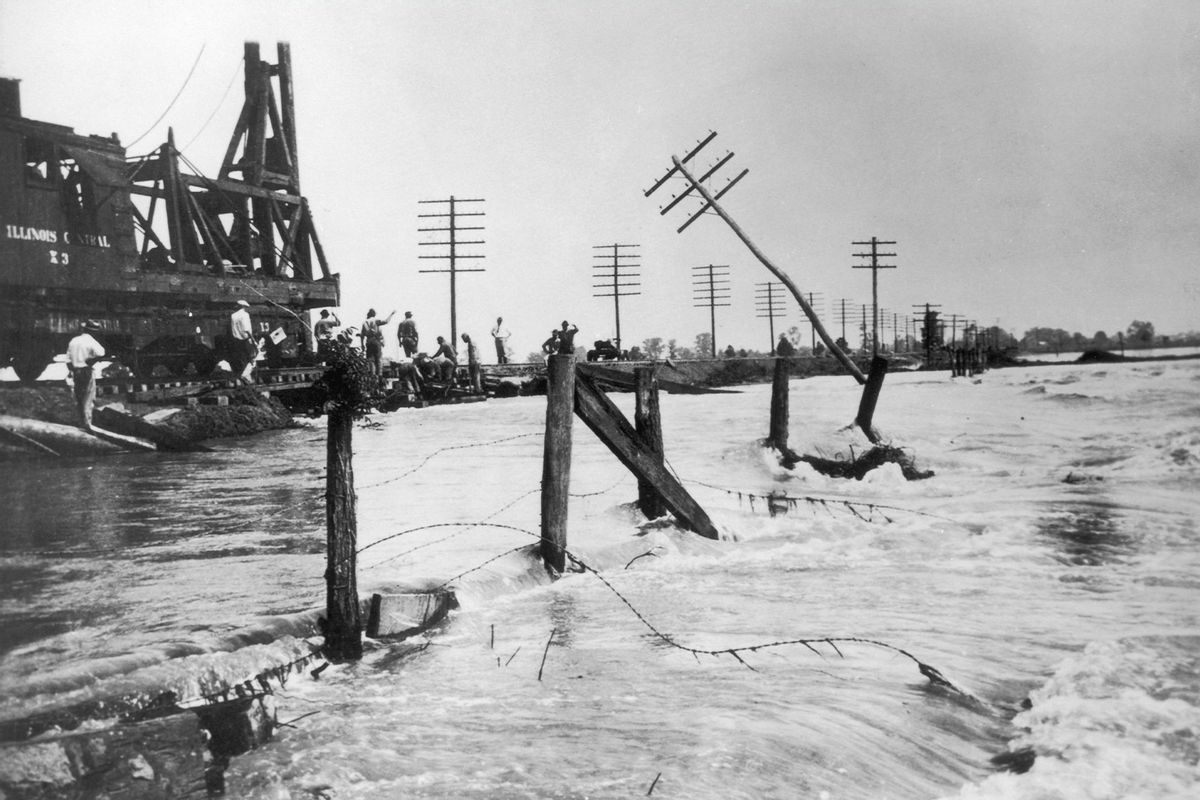 Army Corps of Engineers attend the the Great Mississippi Flood, the most destructive river flood in the history of the United States, 1927. (Fotosearch/Getty Images)
--

As climate change worsens, scientists agree that humanity will be plagued by record flooding all over the planet. It's important to note that 40% of all living people occupy a coastal area, and will therefore be directly impacted as sea level rise and increased extreme precipitation flood out the world's largest cities. Even people who live inland will not be spared; the recent historic flooding in Yellowstone National Park, for instance, is being cited by scientists as yet one more red flag about how no one is safe from climate change-related flooding.

While the upcoming floods will affect all of us, that does not mean people lack the resources with which to protect themselves. Indeed, the basic knowledge has existed before humanity even knew that climate change was a thing. It was perhaps best exemplified nearly a century ago — during America's Great Mississippi Flood — both in terms of what to do, and in terms of what not to do.

The year was 1927. Jazz music was sweeping the nation; Prohibition had made any activity related to alcohol go underground; the movie "The Jazz Singer" would change history by being the first feature to include sound; and President Calvin Coolidge was running the most conservative government that Americans had seen since the William McKinley administration. That last detail became unexpectedly critical to residents of the Mississippi River Valley starting in April, when levees began to burst all over the Mississippi River. For nearly a year — since heavy rainfall in the summer of 1926 led to swelling all along the river's central basin — the infrastructure around the river had been straining, with levee breaks and periodic floods becoming more and more common. Yet the Army Corps. Chief of Engineers had also reported in 1926 that the area's levees were "now in condition to prevent the destructive effects of floods."

"Precipitiation," was the word that historian John Barry, who wrote a book ("Rising Tide") about the Great Mississippi River flood, told Salon by email when asked about the factors behind this uniquely disastrous flood. "There was probably more water in the river system than any other time in known history." He later added that "the levees were not built for those flood heights."

On April 16, 1927, a levee in the Missouri town of Dorena was the first to confirm that the Army Corps. Chief of Engineers had been wrong; 1,200 feet of the levee burst under the pressure of the surging waters. Additional levees in Missouri, Mississippi, Arkansas and Louisiana soon followed, and the subsequent flood was unprecedented. Roughly 930,000 people lived in the land that got flooded during this period, and at least 246 died. The Red Cross estimated the total economic damage — which included homes, business, farmland and livestock, and countless other forms of property — to be at $246 million, or more than $4.1 billion in 2022. The U.S. Weather Bureau put the estimate at an even higher amount, $355.147 million — or almost $6 billion in 2022.

"This was arguably the US environmental disaster that received the most and lengthiest media coverage in the twentieth century while it was occurring,"

"As a [percentage] of GDP, 1927 was by far the most damaging event in U.S. history, significantly larger than [Hurricane] Katrina and triple the cost of [Hurricane] Sandy," Barry explained.

The flood also transformed Americans' awareness of environmental disasters — and for that, we can thank the media.

"This was arguably the U.S. environmental disaster that received the most and lengthiest media coverage in the 20th century while it was occurring," Susan Scott Parrish, a professor at the University of Michigan and author of "The Flood Year 1927," wrote to Salon. "It lasted so long though that the top-down story of federal heroism got severely challenged by southern newspapers who blamed the U.S. government for poor levee design and northern timber and agribusiness for poor environmental mismanagement, and by Black newspapers around the country, who witnessed violently forced Black labor and restricted Black movement as a lingering form of slavery."

African Americans were particularly victimized during the disaster. Among those who lost their homes, it is estimated that more than half a million were African American. (American blues singer Bessie Smith famously described this in her 1927 song "Backwater Blues," which described a Christmas Day 1926 flood in Nashville that was part of the larger flooding cycle.) They were also intentionally abandoned by relief authorities, who cooperated with railroad and plantation owners to make it practically impossible for African Americans to escape from their communities.

The reason was straightforward and cruel: Because their families had lost everything in the flood, employers believed that they might decide to move elsewhere and start new lives for themselves. That would not do for their company bottom lines; as such, large numbers of African Americans were left stranded on intact sections of levees or steered into substandard refugee camps in partnership with the American Red Cross. The only goal was to make sure that powerful companies would still have their horrendously exploited workforce as soon as matters could return, literally, to business as usual.

It was Coolidge's firm conviction that private philanthropy and individual self-reliance should lift people out of their present circumstances.

Yet just as the flood included lessons about what not to do, it also offers instructions on what to do. If ever a president was disinclined to use federal government powers to help the economically suffering, it was Calvin "The business of America is business!" Coolidge. Convinced that even modest relief would drain the budget surplus he had so carefully accumulated, and ultimately set financial precedents that would raise taxes on businesses, Coolidge delegated the task of leading flood relief to Secretary of Commerce Herbert Hoover, yet refused to give him enough funds to get the job done, or even make public appearances on behalf of relief efforts. It was Coolidge's firm conviction that private philanthropy and individual self-reliance should lift people out of their present circumstances.

Yet widespread public outcry placed so much pressure on Coolidge that the collective justified anger ultimately forced his hand. On May 15, 1928, he was forced to sign a federal bill that enshrined the national government's responsibility to help state and local authorities deal with catastrophes that they are unable to handle themselves. While Coolidge was as stingy as possible with the funds doled out to the deserving recipients, it was at least a step in the right direction. Ordinary citizens showed that they could exert collective pressure to force even the most intransigent public officials to do the right thing.

The Great Mississippi Flood also revealed that, above all else, government officials need to be prepared for the worst in terms of natural disasters — because whether they like it or not, the worst is going to come.

"Scholars who study disasters, and how they will be intensified by climate change, stress the need for disaster managers to formulate planning by understanding the perspective of those most at risk, assessing evacuation and mobility challenges, faulty information channels, and the like," Parrish told Salon.

For more Salon articles about flooding: