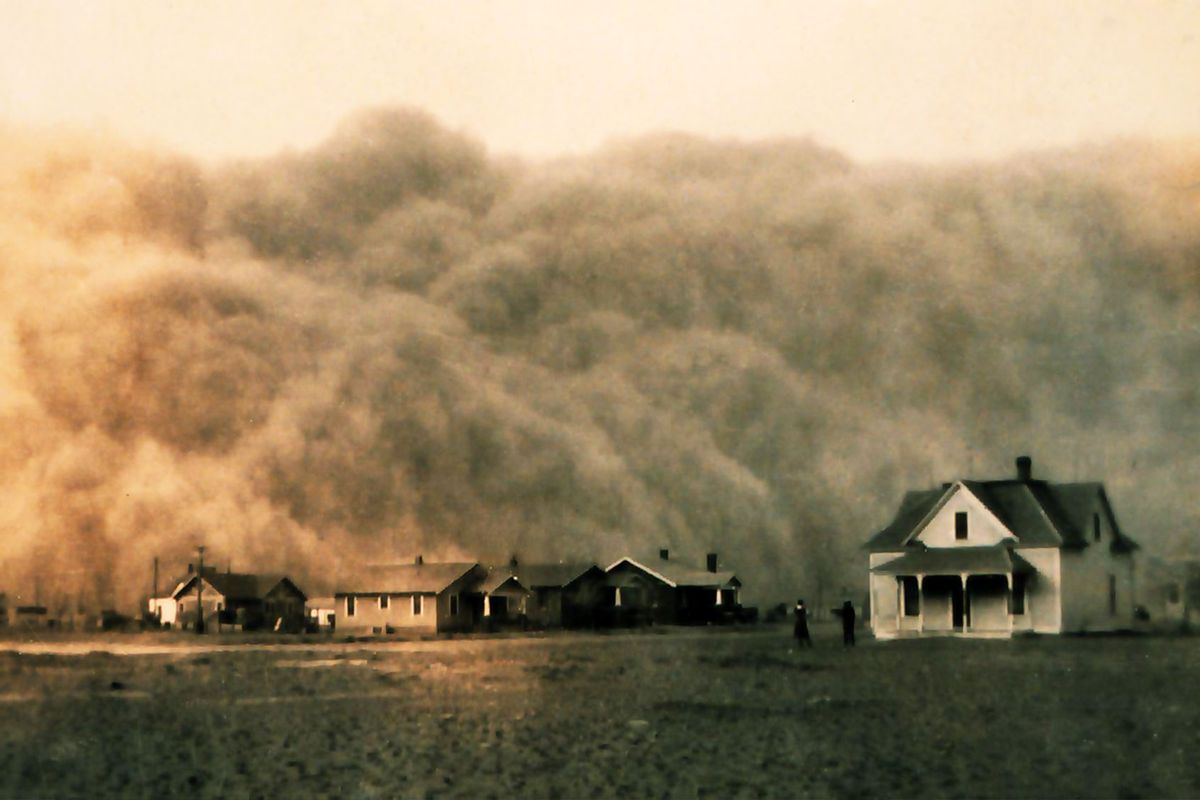 Imagine that you're a farmer during the Great Depression. Since the stock market crashed in 1929, you have struggled to make ends meet for yourself and your family. If you lived in certain regions of Texas, Oklahoma, New Mexico, Kansas or other Plains states, you would stare in horror as giant clouds of dust overtook your land. Your hard work, your future plans, your very life itself — all being overwhelmed by, and buried in, piles of dust.

This horrific scenario was quite commonplace during the United States during the 1930s, and is referred to today as the dust bowl. After the Homestead Act of 1862 made it possible for white Americans to buy western land at extremely low prices, aspiring farmers began snapping up the newly-acquired western territories for cattle grazing and planting vast fields. Unfortunately, they did not apply dryland farming techniques, or agricultural methods that protect the soil from wind erosion when farmers must do their job without irrigation. As a result, the native and deep-rooted grasses that had kept the dirt in place for centuries was suddenly gone. Once a severe drought hit the region, the conditions were perfect for a series of severe dust storms — which happened over and over again in the battered American midwest during the 1930s.

If you want a glimpse of what humanity's future will be like as climate change worsens, the dust bowl is a good place to start. Indeed, much like climate change, the dust bowl began because technological advances overtook our collective ability to apply that knowledge responsibly.

"There are two major points to consider when thinking about changes in the agricultural economy," explained Dr. Douglas Sheflin from Colorado State University, who has studied Colorado during the dust bowl and wrote a book called "Legacies of Dust: Land Use and Labor on the Colorado Plains." "First, market demand for wheat during World War I led to dramatic expansion of production throughout the Great Plains, which is often referred to as the 'Great Plow Up.'  People came to the region en masse to capitalize on the high prices and seemingly inexhaustible demand and proceeded to plant wheat on most every available acre across the space."

"We are seeing far worse droughts today here in the western US and elsewhere, and there's no question these have been greatly exacerbated by climate change."

The problem was that, even as prices dropped, farmers were continued to maximize production, even when their land could not sustain it. This tendency to push land past its breaking point was exacerbated in the immediate post-World War I years, as agricultural technology continued to advance.

"Once the drought of the 1930s hit, and the high winds returned to the area, the exposed topsoil turned into the dust storms that ravaged the region for nearly a decade," Sheflin pointed out. "So the mantra of maximum production helped justify decisions to plan in areas that never should have received seed and to use industrial technology to do it more quickly but not necessarily better."

Climate change may have also been a factor during the dust bowl, as the industrial activity that caused the planet to overheat began a century or so earlier. Certainly farmers in the midwest were struck by an unusually lengthy and intense period of droughts.

"My own view is that the role of land use and agricultural practices is often overstated," Dr. Michael E. Mann, a distinguished professor of atmospheric science at Penn State University, told Salon by email. "The main driver appears to have been an unusual combination of summer heat and drought. Some studies indicate that greenhouse warming was already a contributor even that point, but it likely combined with natural variability to yield those extreme conditions."

Mann added, "That having been said, we are seeing far worse droughts today here in the western US and elsewhere, and there's no question these have been greatly exacerbated by climate change. The only real solution is to solve the problem at its source — i.e. stop burning fossil fuels as quickly as possible. For one thing, we need legislation here in the US that will further that goal."

Jacob Moscona — a Prize Fellow in Economics, History, and Politics at Harvard — told Salon by email that climate change will almost certainly result in "more and more severe environmental crises, and there is some evidence that this is already happening." He pointed to major droughts that occurred in 1988–1989 and 2012–2013, which did not reach the scale of the dust bowl mainly because of better land use practices and farming technology. Even so, Moscona observed that climate change is "leading and is predicted to lead not only to higher temperatures on average but also to greater frequency and severity of environmental crises of all kinds." He pointed to recent research on the link between climate change and cyclones, and added that the increase in days with extreme heat has had a negative impact on crop production which "will only get worse as time goes on."

"This is one area where I think policy could make a major difference, in terms of both funding R&D that would increase resilience in the face of environmental crisis and R&D that might make environmental crises less likely in the first place.

During the dust bowl, the government came up with a number of creative new policies to help victims. Sheflin told Salon that President Franklin Roosevelt's New Deal policies "meant a dramatic expansion of federal spending and new programs/agencies designed to help the American people. Most famously, the Agricultural Adjustment Act tried to reconcile supply and demand issues by buying excess produce and paying farmers for planting specific crops that could better meet public need." Sheflin also cited the Bankhead Jones Act as one that "offered financial assistance to tenant farmers dealing with the crisis, which was novel because most New Deal programs only helped landowners. The creation of the Soil Conservation Service (SCS) and subsequent policies to abet the Service in its goal of promoting agricultural conservation was the most important example of federal policy passed specifically because of the Dust Bowl."

"I think in the present day — and the COVID-19 pandemic put this point in stark relief — the government can play a major role, in collaboration with the private sector, in the funding and developing of new technology in response to environmental crises," Moscona told Salon. "This is one area where I think policy could make a major difference, in terms of both funding R&D that would increase resilience in the face of environmental crisis and R&D that might make environmental crises less likely in the first place. You could imagine an 'Operation Warp Speed' style program, targeted toward technology to combat climate disasters."

The tragedy, however, is that not all governments have the resources to do these things, so "from a global perspective it will be important to think about how we can incentivize developing technology that will be appropriate in all parts of the world, including in low-income countries."

"I do not know if the CDC has an active role in investigating dust storms," Nugent explained. "However, I think this should be a government function. It is hard to know how much time or money should be spent on this. However, it is clear that no one else is  going to have the time or money or expertise to identify unexpected pathogens and outbreaks of medical illness associated with dust exposure."