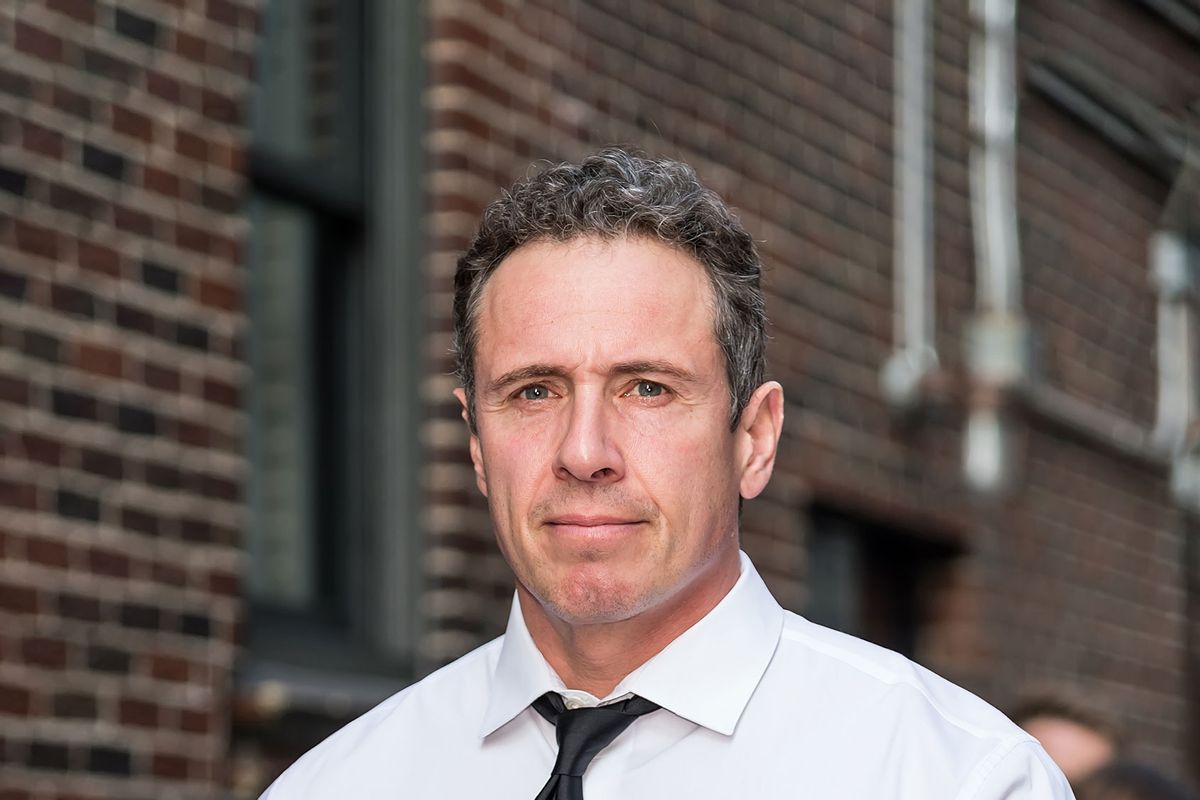 The return of Chris Cuomo to television is the latest reminder that there is little accountability to speak of in corporate news media. Chris was ousted from CNN in late 2021 amidst an ethics investigation that claimed he utilized his position at the cable news juggernaut to advise his brother, then-New York Gov. Andrew Cuomo, who was facing a series of sexual misconduct allegations. Chris used his professional connections to identify what reporters knew about the allegations, and then used that information to consult Andrew on how to respond, all while hosting Andrew on his daily CNN program. In July 2022, Cuomo returned to television to promote his podcast The Chris Cuomo Project. Cuomo appeared on Dan Abrams' show on NewsNation (where Cuomo recently secured a position and I have served as an expert guest) and "Real Time with Bill Maher."

Cuomo's appearances – both of which were with close friends, Maher and Abrams – were clearly an attempt to rebrand himself from unethical propagandist to fearless journalist. Cuomo explained that he was an optimistic person who was not bitter about what had happened at CNN. Looking back on his departure from CNN he said "I feel like I lost a sense of purpose for a while because of how things ended." Cuomo's recollection concealed that he was clearly bitter, so much so that he threatened a lawsuit against CNN and demanded $125 million in restitution for the damages to his reputation.

Nonetheless, Cuomo claimed that he wanted to serve the American people with his podcast and broadcast program by breaking the hyper-partisan frame used in most reporting. This is rich coming from someone whose success is owed to a CNN program that preached to the Democratic Party choir by ritually lampooning Trump.

Chris also took the opportunity to rewrite the historical record on what happened at CNN. Chris' version of events is that while he used his professional contacts to consult his brother and it was unethical, anybody would do the same for their family. Fair enough, but still unethical, and that is not the entire story. He also utilized his platform – with the approval of CNN leadership – to effectively campaign for his brother. Andrew appeared frequently on Chris' show where they performed lighthearted sketches that humanized Andrew, such as debating who their mother loved more or Chris bringing in a giant Q-tip as a prop to mock the size of his brother's nose. This fed into media narratives at the time that claimed that Andrew was "America's governor" during the COVID-19 pandemic and a potential presidential contender in 2020.

The jovial segments were propaganda, distracting from the corruption of Andrew Cuomo's reign as governor. At the time, Andrew was forcing nursing homes to take COVID-19 patients when hospitals were full. This raised the chances of spreading the virus to the most vulnerable – older and sick people. Moreover, Andrew concealed from the public the actual number of deaths that this policy caused. To make matters worse, Andrew granted immunity to nursing homes – known as a liability shield – for their mismanagement of care after they donated to his campaign. The cute segments with his brother concealed the deadly crisis Andrew's corruption had wrought on New York's most vulnerable citizens. In addition to re-writing history about the impact of his CNN reporting, Chris failed to report that CNN fired him, in part, due to his sexual misconduct.

Sadly, Chris Cuomo's return to news media after being exposed as a propagandist does not make him an outlier. For example, Judith Miller was rewarded for lying to New York Times readers to garner support for the 2003 U.S. invasion of Iraq with a job at Fox News. Brian Williams, who manufactured stories of being shot down in a helicopter in a war zone, was given a brief respite before returning to MSNBC. Similarly, Bill O'Reilly remained at Fox News after falsely claiming he was an earwitness to the gunshot suicide of Lee Harvey Oswald associate, George de Mohrenschildt. Rachel Maddow was rewarded with a $30 million annual contract from MSNBC after fear-mongering about Russia, often baselessly for years, in what has come to be known as Russiagate. Even those who made a career out of lying in government are often welcomed guests in corporate media: Oliver North of Iran-Contra fame (Fox News), and Karl Rove who perpetuated the WMD lie (Fox News).

Audiences' lack of faith in news media has not been lost on the industry. Case in point, in an effort to address the credibility gap in news media, the New York Times ran a July 2022 series titled "I Was Wrong About" which actually underscored rather than addressed the problem. The series saw opinion writers admit they had been wrong about some things. Paul Krugman apologized for his work on inflation. Michelle Goldberg did the same about Al Franken, David Brooks on Capitalism, Zeynep Tufekci wrote about The Power of Protest, Farhad Manjoo wrote about Facebook, and Gail Collins wrote about Mitt Romney.

Rather than restore faith in legacy media, the articles reveal the ways in which dominant legacy media manufacture the consent of the public for elite opinion, even when it is baseless. For example, Bret Stephens professed that his sin was chiding Trump supporters rather than understanding the disruption to their communities. In the article, he admits that his judgment was clouded by the groundless claims regarding Russiagate. While it is great that someone in dominant legacy media admits that the Russia fear-mongering was overblown, it does nothing to repair the careers of those who were shunned for holding the same opinion four years earlier. Nor does it alleviate the fact that four years of Russia fear-mongering distracted from other stories – including substantive ones regarding corruption in the Trump administration. Worse, Stephens' atonement does not change the fact that baseless Russian conspiracies remain acceptable and digestible excuses to dismiss and marginalize pundits and policymakers from the left and the right of the ideological spectrum.

In terms of manufacturing consent for elite opinion, Stephens cannot hold a candle to Thomas Friedman. With four decades worth of options, one has to wonder how Friedman chose only one topic for the "I Was Wrong About" series. He has been wrong about so many issues from domestic policy to education to the international economy. In 2000, he incorrectly proclaimed that Colin Powell would not be challenged or overruled in the George W. Bush administration. In 2001, he encouraged readers to "keep rootin' for Putin" because he would lead Russia to be a democracy and U.S. ally. Within the first months of the Afghanistan invasion, Friedman told readers that "America has won the war in Afghanistan," "the Taliban are gone," and the talk of civilian casualties was nonsense. Discussing what Friedman has been wrong about is more of a dissertation topic than an op-ed.

In his article for the "I Was Wrong About" series, Friedman admitted that he was too optimistic in believing that China would become a free and open society once they adopted the free market and global trade. Friedman's article was not exactly revelatory as others in the news media had noted previously that he was wrong on the issue of China. Regardless, Friedman's articles primed readers to accept free trade and other global policies that not only failed to deliver a more democratized world as promised — indeed democracy is threatened around the globe — it also did not improve and in some cases worsened economic conditions for the majority of U.S. citizens. Rather than hold writers like Friedman accountable for the damage caused by misleading the public to adopt elite opinion, they are lauded for admitting they were wrong.

These articles and Cuomo's homecoming illustrate that corporate media personalities are not accountable to the public. They are accountable to the elites they serve. It is elites, not the public, who can provide them with a privileged platform and improved material conditions regardless of the magnitude or frequency of their errors, corruption, or ineptitude. To be clear, errors in journalism are expected and that is why corrections are a standard part of reporting. However, errors should only be excused when the circumstances mislead the reporter, not when the reporter misleads the people, gets caught, and feigns surprise. This is what happened to Chris Cuomo. Cuomo was not ousted for a temporary lapse in judgment or an error that any rational person would make. He was ousted for abusing his privilege and position to serve elite interests. That does not make him a reputable media figure in the tradition of respectable journalism, but it does make him a quintessential prototype for corporate media.

Nolan Higdon is a lecturer at Merrill College and the Education Department at University of California, Santa Cruz. His recent publications include "The Anatomy of Fake News: A Critical News Literacy Education" and "The Podcaster’s Dilemma: Decolonizing Podcasters in the Era of Surveillance Capitalism."