Why "diamond rain" could be normal weather across the universe 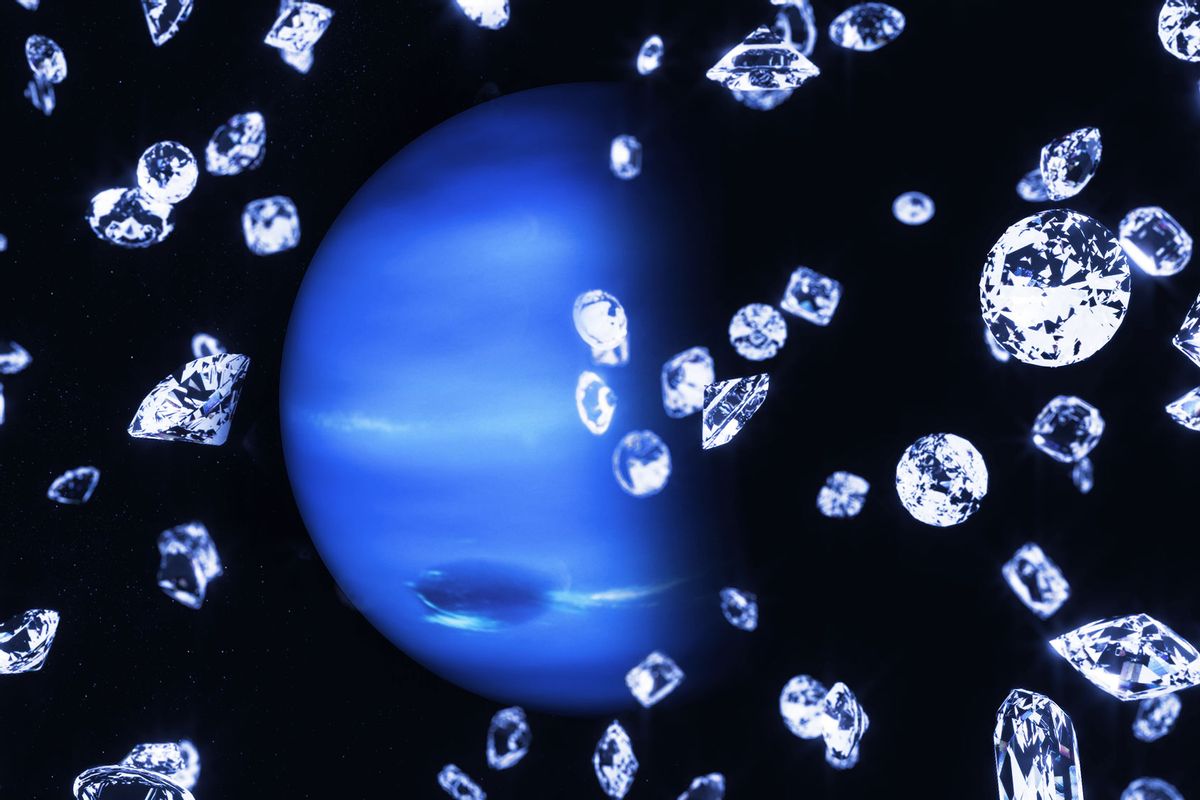 Alien weather can get intense. On Neptune and Uranus, for example, the skies rain literal diamonds. Gravitational forces on these ice giants can become so strong, they pressurize carbon into solid crystals — a carbon crystal being, technically, what diamond is — which then rain down towards the core of the planet.

Diamond rain might seem like an exotic weather phenomenon, but new research suggests it's far more common in the universe than we might think. Indeed, exoplanets, or alien worlds outside our solar system, may be literally swimming with diamonds.

Now, a new study published in Science Advances sheds light on the astrochemical processes that create diamond rain — or "carbon sedimentation," scientifically speaking — and found that this blingy phenomenon may be more common than previously thought. What's more, humans could take a page from this bizarre alien weather and develop technology inspired by diamond rain that could be applied to modern electronics and medicine, which could improve quantum computers, drug delivery and much more.

Diamonds in the sky: Uranus isn't the only planet in the universe raining treasures

"We have a preconceived notion that diamonds are so unique. They're hard to come by on the Earth's surface," Arianna Gleason, one of the study authors, told Salon. "But in the larger cosmos, what we're finding is that the constituent components — carbon, hydrogen, oxygen, the sort of simple molecules — are so abundant, especially in these gas giants in exoplanets, that the volume over which they exist at these extreme conditions is enormous."

Gleason is a physicist at the Stanford Linear Accelerator Center (SLAC), a 2-mile-long particle accelerator that features a giant X-ray laser called the Linac Coherent Light Source. This huge machine can create shockwaves with massive amounts of pressure, comparable to what one might see in the depths of Uranus or Neptune. To study what may be happening on these planets, the researchers targeted a chunk of polyethylene terephthalate, a plastic commonly used to make soda bottles and fibers. It contains a good ratio of carbon, hydrogen and oxygen, which resembles the chemical makeup of these ice giants.

Indeed, like Jupiter and Saturn, Uranus and Neptune are mostly composed of hydrogen and helium. But unlike Jupiter and Saturn, what makes the latter two different is the core of these planets consists of a dense slushy of water, ammonia and methane — which means they probably smell not unlike the outhouses at Coachella. The addition of these chemicals can make a big difference in how these planets produce diamond rain.

This technique could be used to make nanodiamonds for quantum sensors, which can detect the tiniest variations in magnetic or electrical fields — making it possible to measure viral particles, the inside of a single cell or even the spin of an electron.

To recreate these conditions, the researchers blasted their plastic target with immense pressure, forming nanodiamonds — meaning diamonds smaller than 1 micrometer, which are too small to be seen by the unaided eye. To image them, the team at SLAC also beamed two different types of x-rays to more accurately measure the diamonds, the first time this combo has been used. They repeated the experiment numerous times, not only at SLAC but also at SPring-8, a radiation facility in Harima Science Garden City, Japan.

It can get extremely hot when conducting such an experiment, with temperatures ranging from 3,500° to 6,000° degrees Kelvin (equivalent to 5,840º to 10,340º Farenheit.) But these conditions did indeed form nanodiamonds, which thanks to using those multiple x-ray types, was confirmed with higher fidelity than previous experiments.

Now, the evidence for diamond rain on such ice giant worlds is much more persuasive, according to another study author, Dominik Kraus, a professor at the University of Rostock in Germany — and it could lead to novel ways of producing nanodiamonds for industrial uses.

Previously, Kraus and his colleagues formed nanodiamonds by blasting X-rays at polystyrene, also known as Styrofoam. But by using a different plastic this round, it added oxygen to the mix, which made diamond formation even more likely.

"Visualizing how the oxygen played a role in amplifying and ramping up the diamond formation was really key and unique in this study," Gleason says.

"It's pretty strong evidence," Kraus told Salon. "There are many examples where just studying something out of curiosity has turned into very useful applications in the end."

For example, this technique could be used to make nanodiamonds for quantum sensors, which can detect the tiniest variations in magnetic or electrical fields — making it possible to measure viral particles, the inside of a single cell or even the spin of an electron.

"There are probably significant ways you can tune the diamond formation," Gleason says. "Now that we've sort of laid the groundwork — sort of the foundational physics and chemistry study of how would it form at these conditions — now we've got this great knob of pressure, temperature and energy deposition that we can tune to hopefully extract more scalable ways of forming nanodiamonds."

Astronomers have theorized that Neptune and Uranus rain diamonds since the 1980s, but it's not like scientists could just run out and check. And the last probe to visit either planet was Voyager 2, which buzzed by over 30 years ago.

"That's kind of the most up-to-date information as to what we have for those two planets," Kraus says. "If we get a better measurement of gravity and magnetic fields of those planets, then we'll have much stronger constraints for the planetary interiors."

Kraus notes that theories about Jupiter's atmosphere were upended a few years ago when NASA's Juno mission visited the gas giant. So this may not yet be the final word on diamond rain until we learn more about mysterious interstellar bodies like Neptune.

"I hope that in some years, we get another space probe mission to these ice giants," Kraus says. "It's really inspiring. It feels like it goes beyond the little environment here and tries to see more big connections outside our world. If this helps us to bring us new applications on our planet, this is also very nice, but also just to learn what's out there, to really bring us humans into kind of a new context and to our surroundings."

about weather around the galaxy