"Andor" reflects our ugly ambivalence, trafficking in antisemitic tropes while calling out fascism 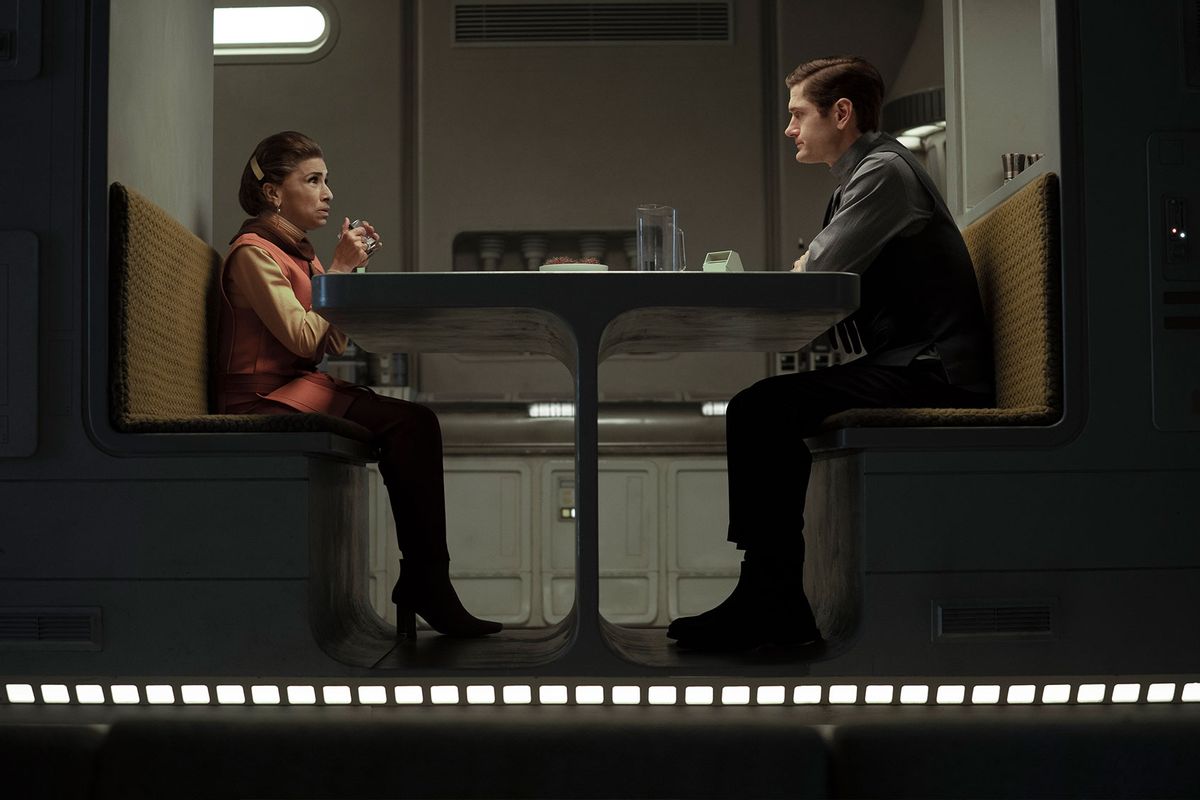 The following contains spoilers from Season 1 of "Andor" on Disney+

While Star Wars may be set in a galaxy far, far away, it is and always has been an allegory for our world and its politics. 2016's "Rogue One" built on this by taking the mostly vague anti-authoritarianism of the prior films and bringing it down to earth. Suddenly we weren't watching a black-and-white struggle fought by elites with red and blue laser swords, but average people doing their best in terrible circumstances, in a world that looked an awful lot like our own.

Disney's latest Star Wars television series, "Andor"—a "Rogue One" prequel that follows one of the movie's heroes, Cassian Andor (Diego Luna) — picks up this mantle, but swaps allusions to U.S. wars in the Middle East for the rise of fascism. When it's elaborating on the brutal consolidation of power under the Galactic Empire and the complicated struggle to overthrow it, "Andor" handles politics with more verve and nuance than any incarnation of Star Wars before it.

However, the way that creator Tony Gilroy portrays one particular family made some viewers uneasy. Eedy Karn (Kathryn Hunter), a human woman on Coruscant, embodies several antisemitic stereotypes, which is troubling enough. But then her son Syril (Kyle Soller) is also striving to join and serve an Empire meant to evoke the Nazis. Combined, these two depictions not only dilute the impact of the historical parallels that the show works hard to draw but has political implications in the real-world — as any good allegory should — that must concern us.

There's no hiding from it: The politics of "Andor" look a lot like the type troubling our world

A civil servant and his mother (and Uncle Harlo)

When we first meet Syril Karn, he's a deputy security inspector for an interplanetary corporation, Preox-Morlana — or the Pre-Mor Authority — to which the Galactic Empire has outsourced the governance of several planets. When Cassian kills two security guards in self-defense, Syril is ordered to "conjure a suitable accident" to cover up the embarrassing loss, but instead decides to investigate and then apprehend Cassian. The incursion quickly turns into a rout with two of Syril's men dead and nothing to show for it. "Take solace in this," Syril is told after he's stripped of his rank. "You will not be replaced . . . As of this morning, the Morlana system is under permanent Imperial authority."

While Eedy and Syril are not Jewish — since, presumably, Judaism does not exist in the Star Wars galaxy — there are strong indications that they are coded as Jews.

Unemployed, humiliated, his spirit broken, Syril turns to the one person from whom he might reasonably expect unconditional help: his mother. She greets him first with a slap across the face, then a tight and tearful hug. Eedy's emotional manipulativeness gets far worse from there. In an extended interaction between the two, Syril is hunched despondently over a bowl of cereal with blue milk, while Eedy demeans him:

"Is that how you've been presenting yourself to the world?" she asks. "It would explain a great deal. You might as well wear a sign that says, 'I promise to disappoint you.' Shame we couldn't have seen more of each other when you were flourishing. I'd have the memory to sustain me." Eedy then gets to her real point: "My assumption is, you have no prospect for the future." Despite Syril's half-hearted assurances, she's unconvinced and exerts greater control, unilaterally deciding to, "call in the family favor" from a mysterious Uncle Harlo.

In two minutes flat, Eedy hits all the major notes of the "Jewish mother trope," belittling, manipulating and aggressively meddling in her son's life. Invoking the name of the well-connected yet unseen Uncle Harlo at the tail end of a litany of Jewish mother stereotypes only raises the antisemitic specter of conspiratorial Jewish power – but it's a well that the show dips into again and again.

On the morning of Syril's interview at the Bureau of Standards, secured by Uncle Harlo, Eedy questions Syril's apparently uncommon choice of suit. "What makes you believe the Bureau of Standards is in the market for individuals?" she says. "Uncle Harlo's influence is not a thing to be trifled with. He's done us a tremendous favor. You need to remember you're not just representing yourself today."

At Syril's interview, we find out the extent of Uncle Harlo's influence. While giving a tour of the enormous bureaucratic complex, the interviewer sees "Morlana One" on his tablet and recognizes the disaster Syril presided over. But even as Syril rushes to offer a defense, the civil servant reassures him, "Probably best for everyone to just edit this a bit before signing you in. I'm sure your uncle would approve." Not only has Uncle Harlo secured Syril the interview, but he's also made it possible to scrub that damning record.

Is Syril's landing the job enough for his mother? Hardly. While she harangues him to eat since he's been so busy (as an office drone and with his own secret mission), he in turn accuses her of searching his room, invading his privacy.

"I find you a job, I press your uniform, I prepare two meals a day," she retorts. "I move mountains to scrape you off the floor and put you back on your feet, and what do I reap? What is the return on my investment? . . . The shadow of a son, a tenant, a stranger – all that time away on Morlana, imagine I'd cracked under the weight of your neglect. Imagine I'd cracked and wasn't here now to pick up the pieces."

Guilt trip done, when she learns that he's been promoted, her demeanor once again turns loving. "I knew they'd recognize your promise," she says before noting how pleased Uncle Harlo will be.

While Eedy and Syril are not Jewish — since, presumably, Judaism does not exist in the Star Wars galaxy — there are strong indications that they are coded as Jews. As a Jew myself, this coding is striking — Eedy's appearance, accent, intonation, mannerisms and phrasing, as well as the topics of conversation and the dynamic of her relationship with her son. And this would extend to Syril because if we read Eedy as Jewish, then he would be too as her son.

All of this adds up to create a visceral impression in me, and I am not the only one to feel this way. Both the Jewish author Abraham Josephine Riesman, as well as the right-wing publication Bounding into Comics, share this appraisal of Eedy. While many of the elements of this coding would be fine on their own, their complete saturation of the character forms the context in which plot points like Uncle Harlo are able to take on a more sinister meaning.

The Empire is ... crucially, subjects that go about their daily lives ignoring or enthusiastically supporting barbarity in the name of law and order, out of fear or simply for personal gain.

This is not to say that characters can't seem, or explicitly be, Jewish while doing bad things and being bad people. No demographic group is exclusively good or bad, and this should be reflected in fiction. But, while I cannot speak to the intention of the show writers, piling antisemitic trope upon trope — narcissism, manipulativeness, shadowy influence and a greedy view of the world — can only cause harm. This harm is reinforced both by the story the show is telling about fascism, as well as the context in which it is being watched and absorbed.

Star Wars has always drawn inspiration from the Nazis, but never has this had greater depth than in "Andor," nor more weight than in our own time of rising fascism. Coruscant, the capital of the Empire and setting for the resistance intrigues of Mon Mothma (Genevieve O'Reilly) and Luthen Rael (Stellan Skarsgaard), has a retrofuture, art-deco aesthetic — from the clothing and hair to the architecture and interior design to the flying cars — suggesting a parallel with Nazi-era Berlin.

Beyond aesthetics, the genocidal aspect of the Empire is developed in greater detail, as well. Not yet vaporizing entire planets from afar, the Empire exterminates methodically and in close quarters — in one instance, recording the death lamentations of a species it was eradicating, and then using these sounds to torture political dissidents like Bix Caleen (Adria Arjona). "Andor" demonstrates, however, that the Empire is far from a hivemind. It's a political and military organization with layers of bureaucracy, divergences of opinion, internal rivalries and, crucially, subjects that go about their daily lives ignoring or enthusiastically supporting barbarity in the name of law and order, out of fear or simply for personal gain.

Eedy and Syril are two such subjects. Syril is obsessed with the Empire, taking every opportunity he can to find a role to play within it, even resorting to stalking the exceptionally cruel Imperial Security Bureau (ISB) supervisor Dedra Meero (Denise Gough). While Eedy is less overtly enthusiastic, she's still clearly a supporter of repression. As a news report about the rebel attack on Aldhani plays in the background, Eedy summarizes it as, "Rabble. They attacked a garrison. They'll regret it." Eedy and Syril are thus not just coded as Jews, but as Jews supporting a genocidal regime that is Nazi in nearly every way but name.

The positive feelings I have for "Andor" come with a giant asterisk.

"Andor" is a genuinely exciting reinterpretation and deepening of the Star Wars universe and, to its credit, it uses the tremendous clout of the franchise to draw attention to essential issues. The show illustrates that fascism isn't just imposed, but requires a broad base of support: it needs true believers and opportunists; it needs those who prefer it to the alternative and those who will tolerate it so long as it does not harm them personally; and, perhaps most importantly, it needs the largest number to feel too afraid and powerless to stand up for themselves, and one another, before it is too late. This could hardly be a more important lesson as we head into our own growing struggle against fascism.

But the positive feelings I have for "Andor" come with a giant asterisk. The show's repeated use of Jewish stereotypes, which range from relatively benign to unequivocally antisemitic – in a time of increasingly uninhibited advocacy of the most virulent antisemitic conspiracy theories, and sharply increasing hate crimes against Jews – is genuinely harmful. What the depiction of Eedy and Syril Karn may lack in overt anti-Jewish animosity, it makes up for by delivering a more subtle and difficult-to-challenge antisemitism – an antisemitism that worms its way into basic assumptions, contributing to a swelling tide upon which hatred and violence are able to crest higher and higher.

Fascism needs targets, and Jews sit among the perennial favorites. In a time of a nearly ubiquitous fascist resurgence, in a show that makes fascism its thematic centerpiece, the inclusion of timeworn antisemitic tropes is, at best, a grave oversight, but it is one that we cannot overlook.

about the Star Wars galaxy

Winslow Erik Wright is a writer and activist whose interests include disability rights, the struggle for authenticity under capitalism, and participatory democracy. Neurodivergent and disabled, he lives in government-subsidized housing with his cat, Peanut, thinking of ways to make the world a better place for all creatures. Follow him on Twitter.