"The Mandalorian" message for 2020: “If we fight amongst ourselves, the monster will kill us all” 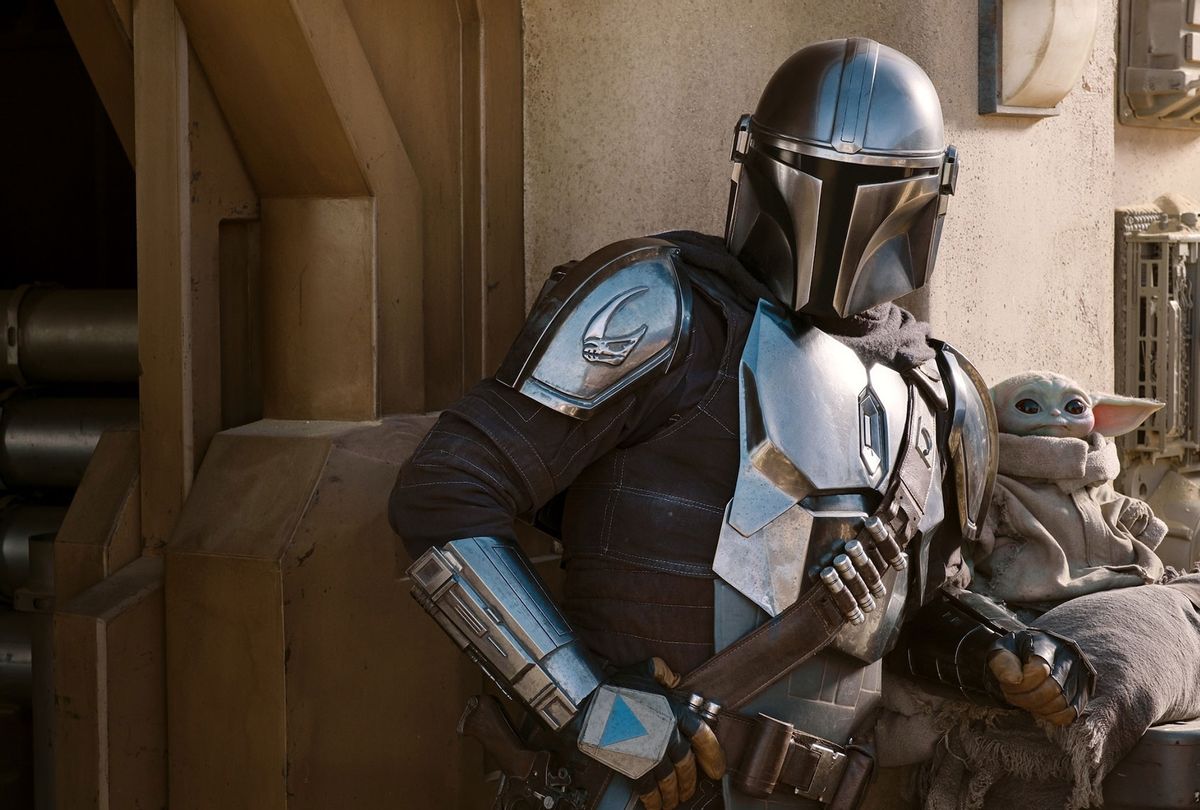 Tusken Raiders first appear in the "Star Wars" universe as criminals, ambushing Luke Skywalker in "A New Hope," knocking him unconscious and starting to strip his land speeder for parts until Obi-Wan Kenobi scares them away. Luke's wise and noble Jedi mentor advises him about the brutality of the Tatooine desert nomads known as Sand People, and whisks him off to safety.

In "Attack of the Clones," Luke's father Anakin begins his transition from Jedi to Sith by slaughtering a village of Tuskens where his captive mother Shmi dies in his arms. Blinded by his rage, Anakin later tells his love Padme that he slew all the villagers  – men, the women and children alike. She replies by reassuring him that anger is human and natural, putting her arm around his shoulders in the classic "there, there" gesture as if Anakin had confessed to roasting a colony of ants with a magnifying glass as opposed to murdering an encampment of sentient humanoids.

Years later in "Star Wars" chronology and our own, "The Mandalorian" reacquaints us with the familiar desert dwellers by showing its hero Din Djarin (Pedro Pascal) camping overnight with a group of them, enjoying a conversation around a campfire.

This brief moment is part of a travel montage showing Mando journeying from Peli Motto's repair dock, where he parks the Razor Crest upon reaching Tatooine, and his destination of Mos Pelgo, an off-the-map mining town. But the fact our hero sits as a welcome equal with a band of beings heretofore painted as savages isn't designed to escape notice.

Later in the episode we find out why the Tuskens view Mando as friend instead of foe or prey: he speaks their language and therefore understands who they are and how they see the world.

This isn't the first time The Mandalorian crosses paths with Tuskens. In the first season episode titled "The Gunslinger" he encounters a band during a bounty hunting mission with a pompous rookie eager to prove himself. The greenhorn wants to use force, and by this point in the series it is established that Mando probably could take on a group of sand people and, if not win outright, at least hurt them greatly. Instead he negotiates a path through their territory using sign language, sweetening the deal by trading his companion's binoculars for safe passage.

The inaugural season of "The Mandalorian" spends the majority of its eight episodes establishing the title character's identity and fleshing out the mythology surrounding the Mandalorian creed. To the mild dismay of critics, these largely standalone adventures produced very little substance to explore, which was excusable because it also gave us lots of Baby Yoda cuteness and memes and quotable moments.

Season 2 arrives at a time of great disturbance in the Force, however. Untold millions are crying out for something to take our minds out of the madness bedeviling the planet, and while Baby Yoda is wonderful and the premiere's guest star introduction of Timothy Olyphant as Cobb Vanth is a neato snack, it's now imperative that "The Mandalorian" couple its distracting sheen with an undergirding of substance.

"Chapter 9: The Marshal" achieves this by introducing Vanth, a character first met in a series of official "Star Wars" novels, and by using Din Djarin's communication skills to unite the Mos Pelgo miners and the Tuskens against a common foe.

Mando ventures to Mos Pelgo in search of one of his kind reported to have been spotted there (an allusion to Boba Fett, last seen tumbling into the belly of a sarlacc in "Return of the Jedi") and finds Vanth wearing Fett's armor instead. This greatly offends the warrior, who demands that Vanth hand over his armor. Following a standoff, they agree to a compromise. The lawman agrees he will do so freely only if the Mandalorian helps him kill the monstrous sand worm known as a krayt dragon, which has the town living in fear. But Din Djarin knows that'll take more than a pair of gunslingers. Enter the Tuskens.

"The Marshal," like the rest of "The Mandalorian," is a careful exercise in merchandising, Easter egg placement and celebrity power; in addition to Amy Sedaris' return as Peli Motto, this is Olyphant's third TV marshal after Raylan Givens in "Justified" and his Mormon lawman in "Fargo," which is exciting, funny and understandable typecasting. Honestly Olyphant's an ace at portraying a flinty, seen-it-all cop, and depending upon the kind of nerd you happen to be, watching Raylan Givens swagger out in what is obviously Boba Fett's beskar armor may have caused lightheadedness.

But if you watch this 54-minute action play through 2020 goggles, you may also notice that it doubles as a critique of colonialism and xenophobia while calling divided factions to unite against greater problems. When Mando defuses a tense confrontation by pointing out, "If we fight amongst ourselves, the monster will kill us all," that sounds a lot like an election year rallying cry.

The "enemy of my enemy" plot is nothing new in genre entertainment, of course. But within the "Star Wars" cinematic canon, allowing the audience to view the Tusken Raiders as something other than mindless killers – a designation drilled into audiences from a young age – is relatively novel. Despite the culturally mixed vision of George Lucas' Rebel Forces, his shaping of this universe isn't entirely enlightened, to put it politely. (Never forget Jar Jar Binks. Never.)

In "The Mandalorian" Din Djarin explains that as Tatooine's indigenous population, the Tuskens are the "locals," not the humans who deem themselves as such. The movies portray the humans as innocent moisture farmers trying to eke out a living on a desert rock while in "The Marshal," which is written and directed by series creator Jon Favreau, the Tuskens' view of the miners and other humans as interlopers and water thieves is completely understandable. But then, many of us (not all, not by a long shot, but a fair share) are slightly more open to understanding the ramifications of colonialism and so-called settlement than we may have been in the 1970s.

"The Marshal" is also loosely following established "Star Wars" lore. (In the books Vanth and the Tuskens forge an alliance against organized criminals and slavers, and he also works with the local Jawas.) That means people who don't want to see a shred of allegory in "The Mandalorian" can view it as an adaptation, or Western-influenced yarn about trust and goodness and underdogs teaming up to slay a giant. Pure Americana set in space. A surprise appearance of a mysterious figure played by Temuera Morrison – who played Jango Fett, Boba Fett's father, in the "Star Wars" prequels – hints at the future appearance of one of "Star Wars"' best-loved characters.

"The Mandalorian" has already established its weightiness and worth to the "Star Wars" mythology and Disney itself by netting seven Emmys this year along with an Outstanding Drama Series nomination. Even so, the forces of franchise longevity demand something more than merchandise opportunities and attractive guest star parades if Disney and Lucasfilm want "The Mandalorian" to resonate beyond the current era.

Favreau appears to understand this as well as the opportunity he has to play with pieces of "Star Wars" mythology that fall outside of the Jedi-Sith binary of good and evil, light and dark, in an approach that speaks to who and where we are now.

The appeal of Din Djarin and "The Mandalorian" is that he's a hero we can more realistically aspire to be – not the cool, precise killing machine part of him of course (we hope) but as a principled man who lives by a credo while accepting that other ways are valuable and worthy of respect, even those many prefer to vilify.

American audiences love antiheroes and swashbucklers; Din Djarin is both, and exactly who we need to inspire a little bravery in increasingly uncertain days.

The second season premiere of "The Mandalorian" and all of Season 1 are currently streaming on Disney+ with new episodes releasing on Fridays.