How to negotiate moving forward from "The Book of Boba Fett" ... like a Godfather

After that finale, maybe it's time to come to the table with new "Star Wars" fables and re-negotiate 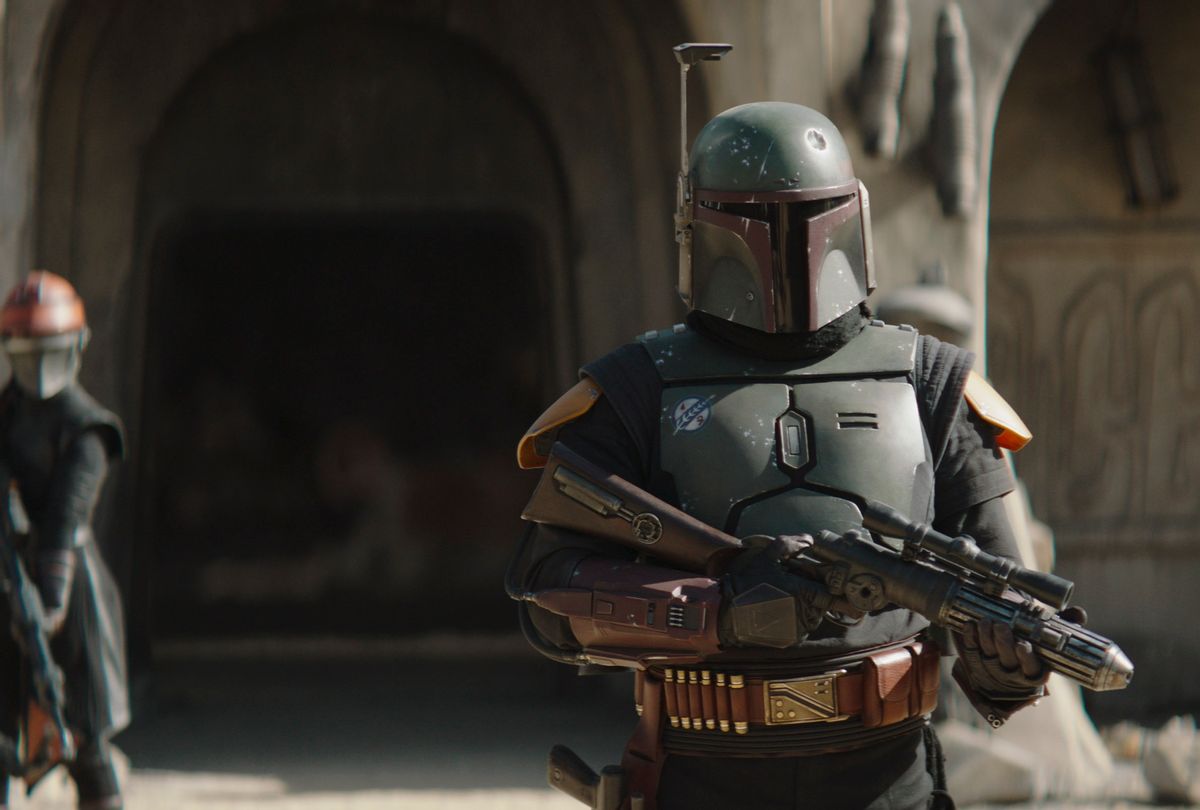 Spoiler alert: This story discusses the season finale of "The Book of Boba Fett" in detail. If you don't want to find out how everything ends, stop reading now.

"The Book of Boba Fett," thank you for bringing together the heads of the other Tatooine families: Dokk Strasi, of Klatooinians; the guys from Trandoshans and the Aqualish, Mayor Flatworm, or whatever he goes by; really, all the randoms whose action figures might be worth something some day if I never open the box.

Truly a "Godfather"-level move this is, gathering all the bosses in one place for a master assassin to wipe them out. If they remained alive and this show is granted another season, we'd get a headache wondering how Jon Favreau will navigate so many backstories. Look at how poorly he handled just the one this time around.

How did things ever get so far? And by "things," I mean the plans for this season. I don't know. It was so unfortunate, so unnecessary. We could have forgiven this trespass if the makers had given the show a more honest title like "The Mandalorian Chronicles," since the reappearance of Din Djarin (Pedro Pascal) provided the best reason to keep watching.

RELATED: Our part in the letdown of Boba Fett

Plus, both heroes lost something after they met in Season 2 of "The Mandalorian." Din Djarin lost his Grogu, while through this show's storytelling, Boba Fett (Temuera Morrison) loses the plot.

Only one man's forfeiture was restored by the time the episode "In the Name of Honor" ended, and his name was not in the title. Despite where the second season finale of "The Mandolorian" left us, there was no way that the show would go on without Mando and Grogu flying the unfriendly skies together.

In keeping with the rest of "The Book of Boba Fett," the best parts of the finale were the sequences that made the most of that reunion, not the elder bounty hunter determined to walk the "serve and protect" path for motivations that are still unknown. Even he in the very end doubts his decision to take over Jabba the Hutt's empire.

"If not us, then who?" his partner Fennec Shand (Ming-Na Wen) wonders aloud – and although they've proven their worth as fair and loyal protectors of the people, a person can't be blamed for answering her with, "Virtually anyone more fascinating than your famous partner."

But this season of "The Book of Boba Fett" has ended; we're quits. And if Favreau and Dave Filoni agree, then I'm willing to let things go on the way they were before – meaning, calling a "Mandalorian" a Mandalorian instead of the bait-and-switch proposal to build out Boba Fett's mythology and establish one for Wen's character, one of the more enigmatic people introduced in this fictional cosmos' expansion.

We remain grateful to "The Book of Boba Fett" for its effort, mainly granting Morrison the chance to bring to life the titular bounty-hunter-turned-kindhearted mob boss. For he is as charming a figure as Boba Fett is, inexplicably, a modest man, despite his reputation as one of the baddest killers in the galaxy.

Yes, but here, he is too modest. He had all the credits in his pocket, and refused to use them to purchase some common sense. Years of bounty hunting somehow brought him up short on contacts in the criminal world, it seems. In the end, as the cruel Pyke Syndicate invaded Tatooine and blew up the best bar in town (Jennifer Beals, we miss your shady Twi'lek lady already!) all he could rustle up were a few adorable scooter kids, a hotheaded Wookiee, and Pascal's popularity. (Even that is something of a trust fall; who even knows if that was the actor under that shiny bucket?)

Anyway, everyone came together in standard spaghetti western "last stand" fashion:  there was a pin-down or four, a lot of laser blaster pew-pew-pew-ing and double crosses, a moment of reinforcement they didn't expect from Freetown and we totally did, and scrapes staged to appear inescapable.

We knew they weren't, because killing one of the most popular characters in the "Star Wars" universe is, to quote various Hutts, "bad for business." And when did the audience or this franchise's creators ever refuse an accommodation? When?

"In the Name of Honor" was nothing but accommodation, which is a more elegant way to say "pandering." There was Boba Fett riding a Rancor, which he said he wanted to do and that Machete (Danny Trejo) warned him would take a long time and training for him to accomplish. We never saw him put in that training, not even through a training montage, yet there he was, yee-haw.

I honestly forgot about the Rancor, one of several savior drops jammed into an episode that looks like a sugar-shocked 10-year-old choreographed it using supplies from his toy collection. "Boom! P-s-s-s-sh! But then he smashed up the building, like King Kong! Oh no! But look, here's Grogu with a sleepy-time spell. Jedi magic! The good guys win! Mom, can I have my snack now?"

The season finale of "The Book of Boba Fett" is the culmination of six episodes' worth of missed opportunities in a seven-episode mash-up between the original "Star Wars" trilogy, the franchise's first successful spinoff and a future that includes a series starring Ahsoka Tano (Rosario Dawson), one of this season's cameos of convenience.

Timothy Olyphant in "The Mandalorian" (Disney+)

Others have purpose, like mid-end credits tease let us know that space zaddy Cobb Vanth (Timothy Olyphant) is still alive despite taking a blast from Cad Bane, the Lee Van Cleef of the "Star Wars" universe. Cobb resides on Tatooine, and could return as some kind of Robocop (these folks love their genre movie references something fierce!) so bringing him into Boba Fett's network is only natural. Also, Boba Fett's overall lack of political skill makes it somewhat believable, to the accommodating, that the two never would have previously met despite how small this planet seems to be.

And kids, if you don't get that Van Cleef reference, look him up. The world is much larger than what Wookieepedia tells you!

But I digress – we were speaking of avoidable messes. If "The Book of Boba Fett" were conceived to be anything other than a misdirect or a collectible parade, it could have augmented this universe in marvelous ways.

The story could have fleshed out any number of characters – including Wen's Fennec Shand, an entirely new character who proved her reputation for being a deadeye and, in this episode, efficiently mopped up the villain's lair by assassinating everyone inside.

Beyond a few "super cool" action scenes and ample consigliere to Boba Fett, her main role was to explain developments neither the script nor most of its directors adequately depicted. And this may be the show's largest fumble. Wen is a magnetic actor billed as a co-lead but made to  show up mainly as a walk-and-talk partner.

Her shortchanging is but one example of the ways that Favreau (who wrote or co-wrote all the episode) scattered story crumbs onto the table and expected hungry viewers to squish them together and call it cake. 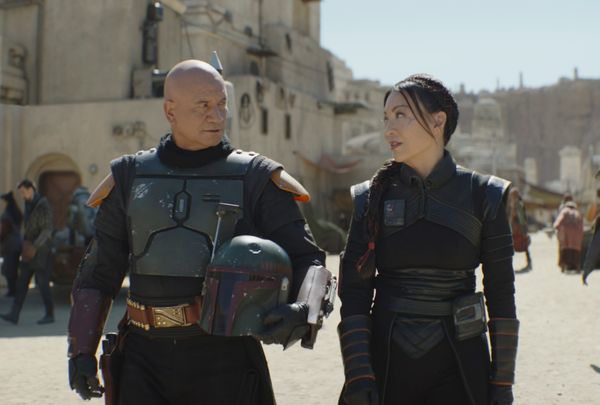 Going by the contortions in which "Star Wars" acolytes engaged to decode or legitimize this heap, drawing generous links between narratives that stole time away from a main plot that was already thin to start with, that was a fine wager on the part of the executive producers.

What it is not, or shouldn't be, is a model for long term success. It's a short-term high, but I believe this business is going destroy this franchise expansion if it's replicated in the spinoffs to come. I mean, it's not like gambling or liquor, or even more cameos by cult favorites like "Clone Wars" heavy Cad Bane. That is something Disney story dealers think Marvel and "Star Wars" want nowadays, and they're more than happy to pour them down our gullets without mellowing the product with that essential ingredient of backstory or going through the process to mix it.

Even we critics have helped them bridge these holes in the past – we're fans too! – but more are going to refuse when it comes to these clumsily manufactured narrative highs. I believed that then, and I believe that now.

Times have changed, and the extension of properties like Boba Fett and Marvel side characters into the TV universe prove this. It's not like the old days when a season of a show was judged on how well its profundity and emotional potency strengthens an overall story. Instead this realm's emphasis on product extension, whether cinematic, plastic or plush, lords over all.

As a reasonable person, but mainly because it's by job, I'm willing to wait out any solution to these problems. But look, we are all reasonable people here. We don't have to give assurances as if we were lawyers.

All right. Now I have to make arrangements to figure out how this whole "Obi-Wan Kenobi" business could possibly land safely. But I'm a superstitious sort. So if some unlucky business should befall Ewan McGregor — if he should be overwhelmed by similarly terrible scripts or Hayden Christensen's thin acting skills, if he's struck by a bolt of lightning — then I'm going to blame some of the people responsible for this whole enterprise. And that, I do not forgive.

But that aside, let me say that I swear on the souls of my official "Star Wars" merchandise that I will not be the one to break the peace that we have made here today.

All episodes of "The Book of Boba Fett" are currently streaming on Disney+.