Omega is the MVP of "The Bad Batch," a Star Wars clone who's destined to be different

The spiritual successor to Ahsoka Tano is a little clone girl 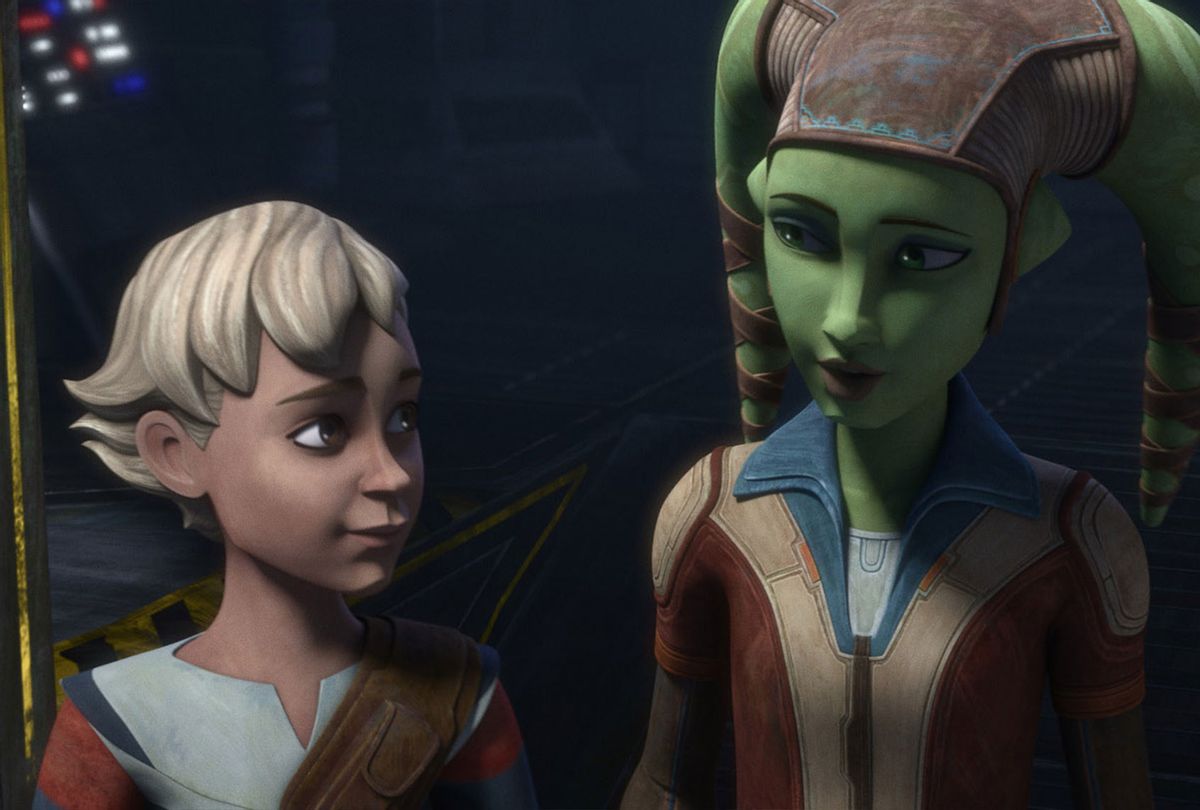 In the animated series "Star Wars: The Bad Batch" on Disney+, there arrives a moment a Star Wars cosplayer might recognize. A girl takes a white-armored clone trooper doll, powders it all over in black (the signature shade of her guardians' armor) and declares, "Now she's a Bad Batcher."

It echoes the intimate moment when Rey in "The Force Awakens" plops an oversized Rebel Alliance helmet on to showcase her aspirations. It's a gesture that fans would find familiar: a little girl turning a typical male-template character and converting it into her own image with her own individual touches. And as in many cases in society, she has no other female template on which to model this image.

When "The Bad Batch" was announced for Disney+, I noticed concerns that there was yet another Star Wars franchise show predominantly centering male characters since it starred established clone characters created from the male bounty hunter Jango Fett, first introduced in "Attack of the Clones." Once the previews came out and revealed Omega, the sole female clone, she was a game changer. Why a clone copy of Jango Fett happens to be female is not as relevant, however, as the relationship the show has built with her and her clone brothers. (Although her lived experience as an overlooked girl does help her uncover identity of an informant whom her brothers assumed was a "he.")

"The Bad Batch" serves as the spinoff successor to the "The Clone Wars" cartoon, set after the events of the Prequel Trilogy when the Jedi have fallen. "The Bad Batch" is notable for developing a period of transition that previously had been omitted from onscreen canon: how the Empire-ruled galactic order replaced clone soldiers with stormtroopers and the early days of the Empire's oppression across planetary systems. These changes send the titular "Bad Batch" Experimental Clone Force 99 fleeing from the Empire-controlled clone headquarters of the aquatic and stormy planet of Kamino for a fresh start.

The Bad Batchers, unlike the other Republic clone soldiers, each possesses a significant mutation that is manifested physically or through abilities. The leader Hunter senses electromagnetic fields, Wrecker is a muscular brute, Crosshair has handy enhanced sight for sniping, the nerdy Tech has heightened technical skills, and Echo (the only "non-mutant" recruited by the group) lives with a cybernetic body. They (sans Crosshair who joins the Empire) end up adopting the runaway Omega, a mysterious medical assistant who resides in the Kamino labs, into their squad. While taking mercenary gigs and evading the Empire, they learn to be devout guardians to her.

When Omega is introduced, she is so distinctive that the Bad Batch processes her differently from the "reg" clones that are ruled as "normal." Something's off. She resembles young reg clones enough in facial profile but looks distinctive enough with blonde hair that Hunter doesn't figure out her relation to the clones at first. Turns out, he isn't so used to this kid's energy or her spirit. (Of note, Omega's design contributed to concerns of colorism regarding her lighter complexion compared to her clone donor, based on Polynesian actor Temuera Morrison's portrayal of Jango Fett.)

When head writer Jennifer Corbett created Omega, she was tackling the question: "How do you challenge a super soldier?" Her answer was to give them a child to raise. The Omega factor continues a pattern throughout the onscreen Star Wars franchise beyond the films: hardened men taking kids under their wings and maturing into accommodating guardians. "The Mandalorian" Din Djarin adopts the 50-year-old alien infant infamously known as Baby Yoda, Kanan Jarrus of "Rebels" raises Ezra Bridger as his apprentice, and Anakin Skywalker mentors Ahsoka Tano in the preceding "Clone Wars."

As a make-it-or-break-it kid sidekick, Omega can be deemed a successor to Ahsoka, the young female audience surrogate who goes on adventures and wields weapons against baddies. But to call Omega a mini-Ahsoka would reduce her own individuality. She's one of a kind.

Owing much to Michelle Ang's disarming voice performance, Omega's charms stem from being a sincere ingenue experiencing the galaxy as it enters the era of the Empire long before a young moisture farmer named Luke Skywalker ever set out on his quest. Being raised and sequestered at the Kamino labs makes Omega the ideal person through whom others can vicariously sample and absorb the light and the dark of the galaxy. When she experiences dirt and sunlight for the first time, she's like a child finding beauty in a sandbox. She later learns that the universe can give her kids to play with just as it can send horrible creatures and bounty hunters after her. Considerable breathing space is given to her existential terror when she learns that the world doesn't adhere to her chipper naiveté and may want to force her into an experiment vat, an implied source of trauma for her.

She's able to capture the breadth of her emotional experiences in one pronoun: "Me?" Omega utters this simple yet portentous word in two separate instances when she learns how people value her for starkly different reasons. It's heartfelt when she learns that the Bad Batch cares her as a member of the family. In contrast, it's horrifying when she learns about the bounty hunters' darker definition of "value," perceiving her body as a prize. Ang delivers Omega's words on dimensional wavelengths.

Like any good kid character, she also points out the moral fissures that challenge her adult brothers' perspective. Her most important question arrives in the early episode "Replacements" as she gazes at a scrapyard of debris and derelict space warships and asks, "What was the war like?" When one of her guardians describes it as a series of "primary objectives," his clinical answer does not satisfy her. She's looking for an emotional answer, and it's clear that she grasps an unspoken incalculable human cost. Her guardians carry out mercenary missions to support themselves, and her dissent often wrangles them into doing the right thing and taking time to care about other strangers surviving under the Empire.

Thus far, Omega sets herself apart from other Star Wars youths by breaking another pattern: she's not a Force-sensitive fledgling needing to be mentored. At least, she isn't confirmed to be Force-sensitive yet. But like the launch of Rey's arc in the Sequel Trilogy, Omega's nebulous origins positions her as rich fodder for fandom speculation, with prospective Force-sensitivity being among popular theories. Personally, I hope she's able to avoid the Force-sensitive twist since Omega is already special as she is.

Sometimes the "Bad Batch" pushes her genetically engineered heritage a bit like the Sequel Trilogy attaching Rey, and by extention her Force talents, to a special bloodline. (That revelation sparked controversy for contradicting a valued message in "The Last Jedi" that a nobody like Rey can be imbued with the Force and isn't limited in one's heroic trajectory.) Characters like Tech insist that Omega's uniqueness and heightened sensitivity comes from purity of breed from Jango Fett DNA, which makes her valuable for Kamonians to capture. She doesn't have growth acceleration and she possesses the battlefield-desirable talents of Jango Fett, such as blaster aim. But there's room for her to assert complete ownership of her own spirit in this season and more. Being genetically engineered for someone else's purpose may be a part of her past but she is defined by her personality and choices.

Her literal blood connection to the famous bounty hunter Boba Fett – mentioned once this season to highlight that he like her is also an unaltered clone – matters little, although it could be ground to explore in Season 2 if she encounters him. They're potential foils: She forges a brotherhood with a clone squad while Boba Fett rejects kinship with clone soldiers as seen in "Clone Wars." As it goes in found family narratives, bloodlines don't matter, though the family dynamic forged here is an interesting subversion because Omega is literally related to her Bad Batch brothers, sharing the Fett blood; nevertheless, blood relations are arbitrary to them.

There are many pathways for a second installment of "The Bad Batch," which closed its first season on Friday. Omega's presence invokes a slew of storytelling opportunities, existential territory that onscreen Star Wars hasn't engaged in. One of them involves exploring the ramifications of clone aging.

While the "Rebels" animated series set during the Original Trilogy illustrated elder clones who quickly reached physical old age in their 20s or 30s, it barely acknowledged how they felt about being engineered with reduced longevity after serving a war. "Clone Wars" at least devoted time to showing clones in their youth like Rex exploring their individuality and agency and seeing modes of living denied to them.

In "The Bad Batch" season finale, we learn Omega that even though she's a kid who ages normally, she is actually older than her guardians and watched them gestate in cloning tubes before they were shipped out for training and their age accelerated them into their recognizable adult forms. Ang's performance has always betrayed a depth of loneliness, as if Omega feels severed from siblings who grew up without her. This poses intriguing, potentially depressing questions about a little girl who has been raised by the very guardians she watched grow from artificial lab wombs. If the Batchers even survive the Empire, how will edging toward physical old age impact them and Omega? How would Omega deal with impending solitude?

"The Bad Batch" Season 1 is currently streaming on Disney+.