A tribute to "Star Wars" badass Fennec Shand, a Force-free hero more aspirational than any princess

Carrie Fisher walked so that Ming-Na Wen could run with the mercenaries. We raise a glass of blue milk in her honor 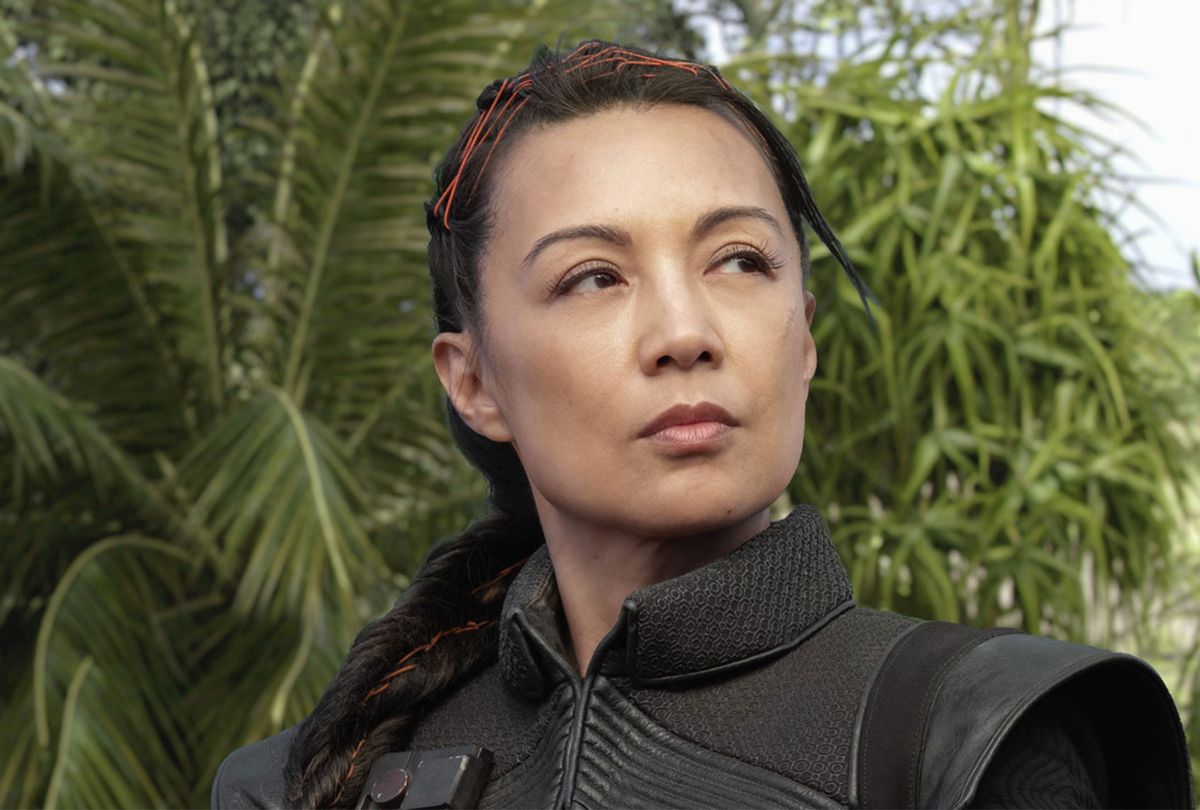 "Strength is a style. But this happens in acting a lot. If you pretend something over and over, sometimes it comes true."

Long ago – or is it once upon a time? – Carrie Fisher made this observation in a Rolling Stone interview to promote "Return of the Jedi." In that conversation Fisher discussed the appeal of "Star Wars" but also the ways in which she and her character Leia Organa were alike and decidedly dissimilar.

By this point differentiating between the two was pointless. "Star Wars" had inserted itself into an entire generation's consciousness, and to most of the people who grew up with Leia and Luke Skywalker, Fisher and her action figure were one in the same. There's a glory to that and a peril for an artist who doesn't want to be pigeonholed or typecast. Remember, Fisher was 19 years old when played the space princess who could shoot a blaster and command a mission to take down a Death Star.

Contrast this with Ming-Na Wen, who plays mercenary sharpshooter Fennec Shand. Wen came to the "Star Wars" universe more than three and a half decades into a career that has more or less kept her in front of multiple generations of TV viewers and filmgoers. If you didn't see her on NBC mid-'90s hit series "ER" odds are you might recognize her as the voice of Fa Mulan from Disney's 1998 animated original version of  "Mulan."

Genre-lovers who saw her in "Stargate Universe" must have been thrilled to catch her as the indomitable Agent Melinda May in "Marvel's Agents of S.H.I.E.L.D."

Now she's an elite assassin co-starring in "The Mandalorian" spinoff known as "The Book of Boba Fett" as well as lending her voice to the animated version of the character in the animated "Star Wars" series "The Bad Batch," which makes its Disney+ debut on Star Wars Day. The recent live-action remake of "Mulan" featured her in a cameo, too.

So although Leia's immortality makes memorializing the late Fisher on May the 4th natural, the 2021 edition of Star Wars Day moves us to recognize Wen as an inspiration within the universe, especially among those of us who, yes, actually saw the films of the original "Star Wars" trilogy in theaters when they were first released.

Feminist "Star Wars" fans love our General, unsung rebels like Jyn Erso and Ahsoka Tano, the headstrong Jedi introduced as an apprentice in "The Clone Wars." Fennec Shand, though, offers an alternate option in this universe's power fantasy pantheon, a gun for hire with a rep placing her in the same league as Boba Fett and, as we saw through her "Mandalorian" arc, plenty of life (and near death) experience.

That could make her more relatable to women of Generation X and even older Millennials as we recover from so-called pandemic "she-cession" that saw the workplace gender gap alarmingly widen in 2020. Despite all the rah-rah empowerment messages corporate America directs toward older women in the workforce, there comes a point at which we experience firsthand how rare and challenging it is to level up to General or whatever that equivalent is in our field. For women of color, this is doubly true.

To watch Wen, a woman of certain age in notoriously ageist Hollywood, take on the role of a bonafide ass-kicker to the absolute thrill of all ages sets a goal post to struggle toward. And while Wen has been working in the industry long enough to be known for any number of parts, her "Star Wars" role puts her in the league with a too-small number of women in this universe operating outside of known support systems. You know, like the average, regular woman of Earth.

Fennec Shand is a sharpshooter who boasts that she never misses, but from what we've seen her skills aren't the result of any technological enhancements. As far as we know she isn't royalty or Force sensitive or any of the other usual reasons this universe has to explain an individual's high-achievement and excellence, either. She had to work to get that good.

By partnering with another forgotten, left-for-dead great, Boba Fett, we may see her rep further expand.

Don't mistake this as a means of downgrading Fisher's legacy. She also famously defied sexism and ageism to carve out a niche as a script doctor and parlay her character's legacy into a career that gave her, and us, many memorable roles including in "When Harry Met Sally" and her final TV credit on "Catastrophe." She was also a child of Hollywood royalty, the daughter of actor Debbie Reynolds and pop star Eddie Fisher, giving her a leg up in that town.

Wen's family immigrated from Hong Kong, and she worked her way up in the industry starting with her first TV appearance on "Mister Rogers' Neighborhood," and if you don't love that credit you must be a soulless as a Sith. Following that she made her bones on soaps before landing a starring role in "The Joy Luck Club" and has been grinding it out ever since.

This part of her story is a common one among any number of actors. What's unusual is for a performer like Wen to catch a second wind after contending with everything Fisher faced and racism to carve out a persona as a force to be reckoned with, within the world of the Force.

Importantly, though, none of her success simply happened. She had to reach out and ask for that cameo in 2020's "Mulan" – it wasn't simply offered. That's how she's approached every opportunity, as she recently explained to Insider.

"You just have to keep forging ahead and knocking down the barriers and not let people devalue you," she said.  "Hold yourself up to the level that you want and feel you deserve. There's no sense of arrogance about it. It's just coming from a sense of strength and being able to identify yourself as someone of value and someone able to offer something and never use being short, tall, fat, skinny, young, old as an excuse not to have something happen. When you start there, that's when things change. You have to believe it."

Spoken like a woman who doesn't wait for the Force to save her but understands she has to be one. Belief in universal power is great, of course, and there's no reason to believe that princesses can't become generals. But mercenaries don't wait for orders to do what they need to do – not in fantasy or in reality. So if you're going to raise a glass of blue milk to your heroes on this May the 4th don't forget the woman wearing the mantle of the incomparable Fennec Shand. Faith is the spark that lights a rebellion, but acting on goals is what gets the job done. And Ming-Na Wen, like the mercenary we love watching her play, represents #goals.

Wen as Fennec Shand appears in "The Mandalorian" and "Star Wars: The Bad Batch," which debuts on Tuesday, May 4 followed by new episodes every Friday starting on May 7.  "The Book of Boba Fett" is scheduled to debut in December 2021. All of these series stream on Disney+.