Sure, we're excited to see Lando Calrissian and Boba Fett, but reliance on past characters isn't very reassuring 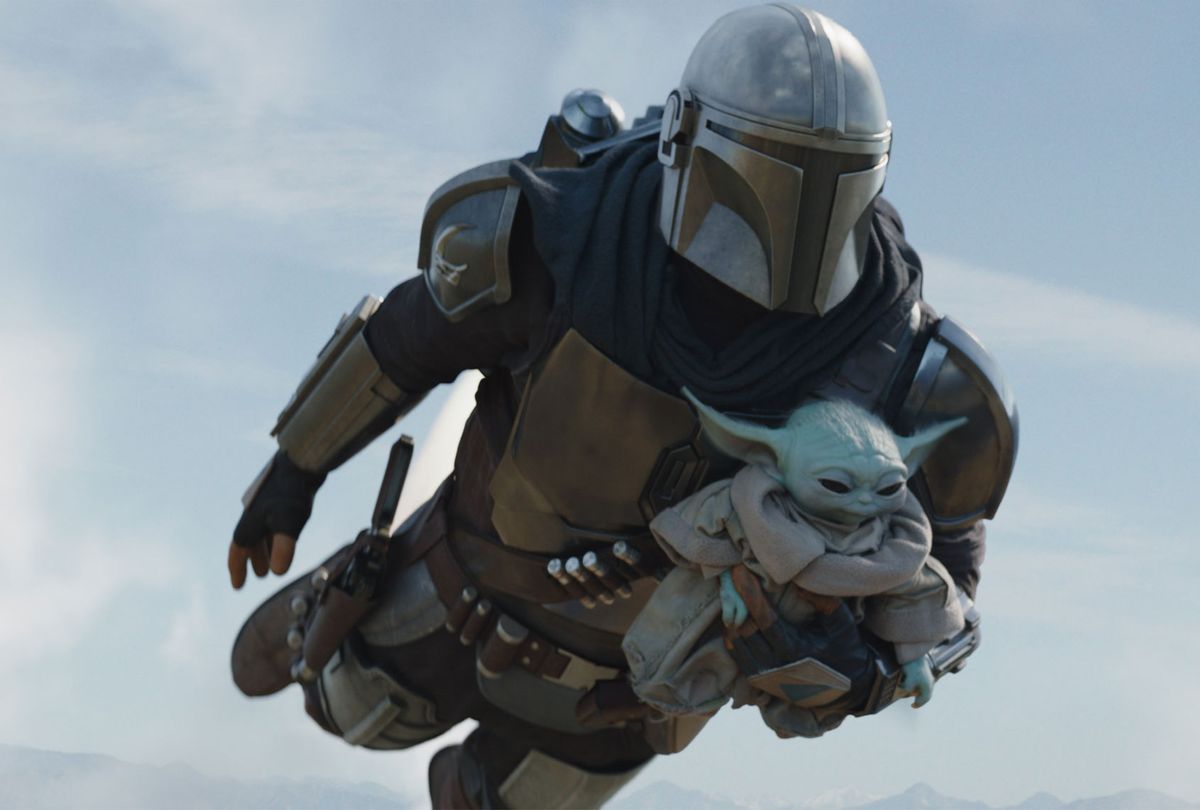 In case you haven't heard, the "Star Wars" universe exploded this week, and we have the success of "The Mandalorian" to thank for that.

You may recall that the series launched on the same day as the Disney+ debut a little more than a year ago, bringing the media giant's library, which includes Marvel and the film and TV assets previously held by 21st Century Fox, into our homes.

On Thursday the company announced that its year-old streaming service is closing in on 87 million subscribers, most of whom likely signed up in exchange for accessing the hundreds of movies in its vault on demand. For $6.99 a month that's a fair trade, especially for anyone with kids. Even $7.99 is a decent price, or Disney is hoping that it is since part of its announcements to investors this week was that it would hike monthly subscriptions by $1.

For obvious reasons the Disney+ streaming service is the platform upon which the company is pinning most of its franchise hopes, urged on no doubt by the recent industry-shaking move made by Warner Bros. That company recently announced that all 17 of its films originally scheduled for theatrical release in 2021 will also be available HBO Max on the same day they come out in theaters, starting with the Christmas Day debut of "Wonder Woman: 1984."

Before Thursday "The Mandalorian" was the only part of "Star Wars" franchise still flying, what with the Skywalker saga now complete and the company's commitment to its related "Star Wars" stories on hold after the disappointing performance of "Solo."

But unto Disney "Mandalorian" creator Jon Favreau delivered a new frenzy-producing fascination in the diminutive form of The Child, aka Grogu, aka Baby Yoda, and his exciting adventures with titular character Din Djarin, played by Pedro Pascal. The company realized that this was the way, and now we are getting two "Mandalorian" spinoffs: "Ahsoka" was widely assumed to be a done deal the minute Rosario Dawson showed up as Ahsoka Tano, a fan favorite from "The Clone Wars" animated series, in the fifth second season episode titled "The Jedi."

As for the other one, "Rangers of the New Republic," the programming fact sheet says it will "intersect with future stories and culminate into a climactic story event." OK. Both are executive produced by Favreau and Dave Filoni.

These are but two of many planned "Star Wars" TV titles due over the next few years. A prequel spy thriller called "Andor," which follows Diego Luna's hardboiled spy introduced in "Rogue One," is set to debut in 2022.

The company teased a Lando Calrissian miniseries being developed by "Dear White People" creator Justin Simien; and another event series that returns Ewan McGregor to the role of Obi-Wan Kenobi along with Hayden Christiansen as a younger (but very toasty, I guess) Darth Vader, set a decade after the events of "Revenge of the Sith." Hopefully McGregor and Christiansen will be encouraged to do some acting this time around; they are capable performers.

We're also getting "The Acolyte" from "Russian Doll" creator Leslye Headland, described as "a mystery-thriller that will take viewers into a galaxy of shadowy secrets and emerging dark-side powers in the final days of the High Republic era," and a Disney+ adventure film featuring R2-D2 and C-3PO titled "A Droid Story."

All this is in addition to two new animated series, "The Bad Batch" and an anime-style anthology collection titled "Star Wars: Visions," and a pair of theatrical features. One, "Rogue Squadron," will be helmed by "Wonder Woman" director Patty Jenkins and set for 2023. "JoJo Rabbit" director Taika Waititi is developing the other.

(These are only the "Star Wars" announcements. Disney also has grand plans to expand its other properties, Marvel and Pixar included, and caused a stir by announcing that Harrison Ford was on board for another "Indiana Jones" feature.)

Diehard worshippers of all things Force-related must be alight with joy at all this bounty headed their way. Why wouldn't they be? Well . . .

Oversaturation is a real danger here, folks. It has to be said. The "Star Trek" universe learned that some time ago when it ran out of juice before our sunken eyes in the form of "Enterprise," the show very few people are tweeting about revisiting. "The Next Generation" made viewers excited to revive their love for Gene Roddenberry's universe for a time, and begat "Voyager" and "Deep Space 9," both of which are still very loved. By the time "Enterprise" rolled the engine had run out of steam, and viewers and producers alike silently agreed to mothball the brand for a few cycles.

And yes, we're discussing very different franchises with disparate fanbases – and lots of crossover between each! – but what "Trek" shares with the "Star Wars" brand is that each has been around for decades.

Save for a 16-year fallow period, "Star Wars" has lingered somewhere in the surface thoughts of many millions of people and has kept popular culture captive by steadily nurturing the expansion this universe. Thanks to many "Star Wars" novels and Filoni's engaging animated series there's an entire universe with the "Star Wars" brand waiting to be drawn upon and fleshed out onscreen.

There's no way that Disney wouldn't want to capitalize on such resilient appeal.

But while the company is in no way intent on killing the goose that's laying golden eggs, they certainly are creating a lot more geese, potentially driving down the product's value or increasing the odds that each new clutch will be of lesser quality than the next.

The "Ahsoka" pickup is either a no-brainer, given the passion of loyalists who came to love her through Filoni's development of her character via "The Clone Wars" or a gamble with odds set against it owing to high expectations. "Andor" looks exciting, and who doesn't love Diego Luna? Then again it also has a whiff of "If you like Han Solo, but found 'Solo' underwhelming, why not try . . ."

An apt enough segue to a second point, which is the hint of unoriginality here in all nearly all of Disney's series announcements.  Granted, choosing to be mimetic instead of experimenting with something that hasn't been tested is also good business.

"The Mandalorian" proves this by leveraging some elements of familiarity within the universe while writing fresh pages to be added to its overall mythology. Favreau and the writers have been relatively careful to refrain from invoking too many legends too early on even as they've capitalized on the popularity of edge characters, such as Boba Fett, to launch entirely new stories.

Much as folks love Pascal, Din Djarin wouldn't be such a weekly fixation if not for the longstanding and largely dormant ardor people held for Han Solo's nemesis or the unexplored anthropological origins of Yoda.

One might also sense danger in that proposal, yes? Because from the moment the series was announced, an appearance by Boba Fett, or at the very least a resolution to one of the longest standing examples of an onscreen demise without the proof of a corpse, was inevitable.

Once a series teases the appearance of one popular character you just know there will be another. And another. The Mandalorian" successfully returned Boba Fett (and Temuera Morrison, the actor who played his father Jango in the prequels) to active service for the slam-bam explosive action flick portion of the tale – and yes, that describes most of Season 2.

Introducing Dawson as Ahsoka in the season's fifth episode ("Chapter 13: The Jedi") is a move that would have been described in a bygone era as a backdoor pilot.

By the current landscape's definition, however, this was a sampling. How pumped was the fandom? Very, for positive reasons along with less-than-stellar ones. No matter where you stand, Disney is counting on "Ahsoka" to be so irresistible that you cannot resist tuning in.

Harder to foresee is how long it will take for even the most Force sensitive to become immune to this insistent expansion of this universe outward and looking backward via its series as opposed to moving the story forward and beyond where "The Rise of Skywalker" left us. This is the way that is most sensible, but to take a longer view may make one fear that it'll lead to a dead end sooner rather than later . . . hopefully not before we get that Lando show, though.