How Star Wars failed Ahsoka Tano on "The Mandalorian," even beyond the casting controversy

Rosario Dawson portrayed the live-action version of the popular Jedi, who is best remembered in animated form 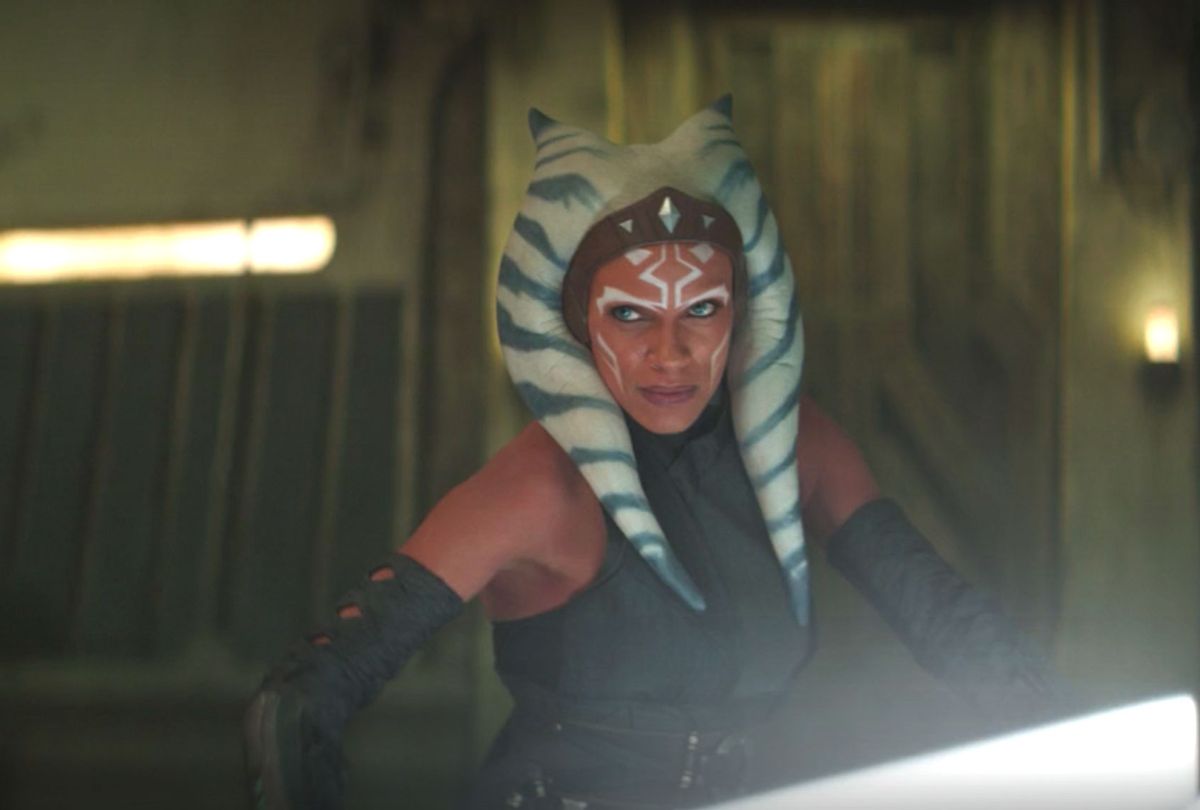 Rosario Dawson as Ahsoka Tano on "The Mandalorian" (Disney+)
--

On a recent episode of "The Mandalorian," shockwaves reverberated throughout Star Wars fandom when Rosario Dawson donned the red-and-white makeup and signature montrals for her debut as Ahsoka Tano. In the episode, the Jedi interacted with Baby Yoda and later swung her dual lightsabers through laser fire to clash with a new villain, Magistrate Elsbeth (Diana Lee Inosanto). The Force should've been strong with Ahsoka's long-awaited appearance, yet the fandom was split over the portrayal of the fan-favorite character.

Much had been riding on selecting just the right actress to portray the headstrong young Jedi of the Togruta race, who was first introduced to George Lucas' Star Wars universe in the animated "Clone Wars" series created by Dave Filoni. The addition of Ahsoka, voiced by Ashley Eckstein, to canon was both risky and game-changing as the apprentice to Anakin Skywalker, who would someday become the infamous Darth Vader. Despite an initial rocky reception, her snark, her insecurities, and her badassery won the hearts of many Star Wars fans, including skeptics like me, especially since Ahsoka was the first onscreen female Jedi with a complex coming-of-age arc that included challenging the Jedi institution that raised her.

Once Ahsoka's voice was heard offscreen in "Rise of Skywalker," anticipation to meet her in the flesh grew. The Disney+ series "The Mandalorian," which takes place after the events of "Return of the Jedi," was the most logical place for her leap into live action. Dawson had already expressed interest in playing Ahsoka as early as 2017, and although rumors of her casting abounded in the last few years, Lucasfilm never confirmed them.

The arrival of Dawson as Ahsoka in the episode "Chapter 13: The Jedi" should've been cause for rejoicing. Unfortunately, it was marred due to controversy attached to her casting, in addition to qualms with her performance.

Although Dawson is a popular and acclaimed actress who has conquered genre fandom in both the DC and Marvel universes, the possibility of her entry into the Star Wars galaxy came under fire early on due to troubling accusations. In 2019, transgender handyman Dedrek Finley filed a civil lawsuit accusing Dawson of holding him down while her mother beat him, as well as accusing her family of misgendering and deadnaming abuse.

According to Vanity Fair, 18 of the 20 claims were withdrawn voluntarily without a settlement, and the remaining claims concern the alleged physical altercation. In a follow-up interview, Dawson denied the accusations.

However, doubts about Dawson's true feelings and actions linger in the fandom. When it comes to the financial dynamics between a wealthy celebrity and a transgender employee and how court cases historically fail transgender people, the power imbalances shouldn't be ignored.

In addition, those who let loose defensive rhetoric to such accusations render these fandom spaces unsafe for transgender fans. Some insist that Dawson's queer identity and her public support for the LGBTQ+ community disproves Finley's narrative. However, that relies on the misconception that those in LGBTQ+ circles cannot commit transphobia. In the words of Josefina Vineyard, a Star Wars fan quoted in Vanity Fair, "It is simply more realistic to assume that if one is accused of something so common as transphobia, that there is likely merit to that."

I do not have easy answers on how Lucasfilm should have responded to the situation. For months the press reported on the rumors of Dawson's casting, but the studio stayed mum. I suspect that this was strategic silence to not spoil Ahsoka's arrival, but this secrecy came at the expense of its audience members contending with the uncertainty.

I wish during that wait Lucasfilm at least addressed the accusations while establishing concrete actions to be inclusive and cognizant of fandom concerns. And if recasting was possible on time, it would have been the safest path to avoid hurting transgender fans while Finley's accusations were still pending.  And even if his remaining two claims are dismissed or withdrawn, the studio still shouldn't shrug off fans' vocal concerns as wrong and invalid. As long as the court system continues to fail transgender people, these clouds will remain.

There's still the task of pushing Lucasfilm to listen and address their marginalized audience. But until then, fans have taken it upon themselves to counter the toxicity and support their transgender compatriots. The GoFundMe campaign "Trans Rights are Human Rights: This is the Way," which benefits the Transgender Law Center, was created in response to "Mandalorian" cast member Gina Carano's dismissive tweets against pronoun courtesy.

While acknowledging the casting controversy, many critics still praise the return of Ahsoka. In the series, the titular Mandalorian, Din Djarin (Pedro Pascal), travels the wide galaxy while caring for an alien Yoda-species youngling (dubbed "Baby Yoda" in popular culture) who has mysterious powers he doesn't understand. By Mandalorian creed, Din must return the child to its kind, a Jedi in this case, who can raise the child as well as explain the Force. The Jedi he approaches to hopefully take on this role turns out to be none other than Ahsoka.

While it may seem nitpicky, I was among those fans who harbored mixed feelings about this version of Ahsoka. Her alien-montrals appears shrunken for practicality of movement and looked foamy on camera. But above all else, the episode produced a rather conservative depiction of Ahsoka, not utilizing her much beyond the shell of a Jedi wisewoman.

This Ahsoka espouses the "fear and anger leads to the dark side" doctrine common among the old Jedi without much variation. In contrast, it was far more tantalizing to witness an animated Ahsoka second-guessing her Jedi identity throughout "The Clone Wars" and "Star Wars Rebels."

This restraint is not necessarily a negative nor is it out of character though, rather a byproduct of the series, which is anchored to the Mandalorian's point of view. Therefore, Ahsoka is treated as a mystic figure to observe from the distance, and after time has passed, it's likely that she's reached a point where she made peace with her identity crisis. At her best, Dawson wears calm and mature professionalism with touches of sanguinity, such as when she smiles and communes with The Child – now named Grogu – through the Force.

An uninspired performance and storytelling

Ahsoka's well-earned maturity aside, many other aspects of this Ahsoka don't quite sing onscreen. When Dawson delivers lines like "I've seen what such [angry] feelings can do to a fully trained Jedi Knight," it ought to be loaded with heartbreak (whether or not not the viewer knows her history), but the weight does not sink in.

Filoni had helped create the original, younger Ahsoka for "Clone Wars," and he continues with her evolution as the writer and director of this episode. But his animation background and lack of previous live-action experience was already noticeable in the two previous "Mandalorian" episodes he directed, and can still be felt here. Dawson's performance may have benefited from different direction and prompting.

Some fans felt that this flatness could've been avoided if the series had just cast the original voice actress, Eckstein, to reprise the live-action Ahsoka, just as Katee Sackoff reprised her animated character Bo-Katan Kryze for "The Mandalorian." I can't pretend to not share this sentiment since Eckstein's soothing voice cinched Ahsoka's likability, but Ahsoka is coded as a woman of color. Lucasfilm putting faith in a newcomer of color to physically embody an iconic Star Wars character could have paid dividends.

But that didn't happen, and sadly, Filoni's storytelling choices didn't help endear this version of Ahsoka either. While Ahsoka's climactic saber fight against Elspeth is thrilling – reminding me of the atmosphere of the best of Genndy Tartakovsky productions – Ahsoka's actions felt off. Watching Ahsoka flick her wrist to trip her enemy, bat her lightsaber, pop up behind adversaries, and spring roof to roof – I felt could be snappier when executed in animation. I suppose that awkwardness could be chalked up to a shaky live-action direction, although previous "The Mandalorian" directors Rick Famuyiwa and Deborah Chow succeeded better.

I also found it unproductive for Ahsoka to name-drop a famous Star Wars legendary villain, Grand Admiral Thrawn, to tease a new antagonist. This fan service disturbed the charm of the series by crossing a line since there was no indication this villain would be relevant to the adoptive father-son story at the series' emotional core. And while it would be fun to think about another unresolved mystery in "Star Wars Rebels", which Ahsoka was involved in, it shouldn't be done at the expense of Din Djarin and Grogu's story. It would have been more tantalizing for Ahsoka to leave her question at "Where is your master?" and omit the answer.

I'm open to seeing Ahsoka morph and evolve across mediums. But for now, I believe I've already witnessed Ahsoka realize her fullest potential in animated form.

"The Mandalorian" airs new episodes on Fridays on Disney+.