The best scenes in "The Book of Boba Fett" are silent 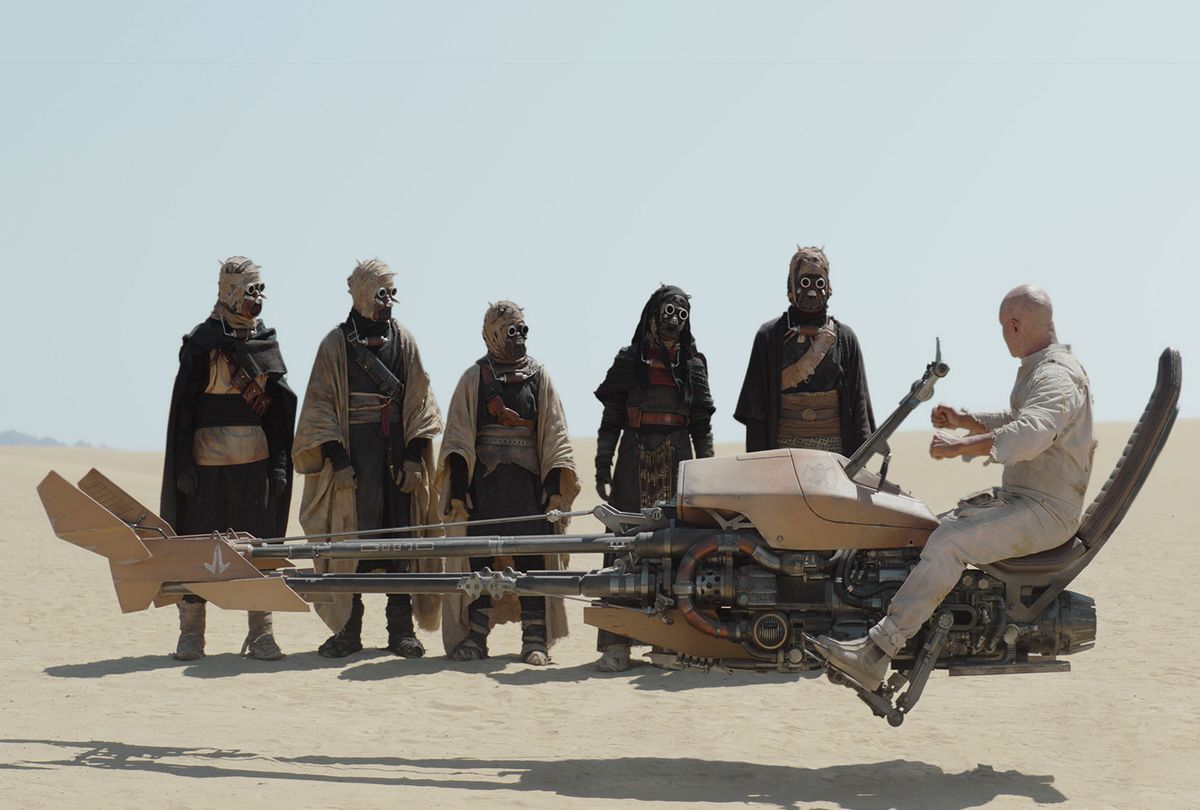 Tusken Raiders and Boba Fett (Temuera Morrison, on right) in a scene from "The Book of Boba Fett" (Disney+/Lucasfilm Ltd.)
--

In year one of the pandemic, my partner and I introduced our young son to the entirety of the "Star Wars" universe, from the Skywalker saga to the standalone films and series. It filled the time in a delightful way. Soon my son invented a game. At night, when we were tucking him into bed, he would quiz me on "Star Wars" quotes.

What movie or show had this line come from? What about this one? I often got the answers wrong, sometimes to amuse him. Sometimes, because I just couldn't remember. He, with the encyclopedic knowledge of children able to memorize the most random dinosaur, always got the quotes right.

Related: How one young actor is using American Sign Language in animation

In "The Book of Boba Fett" creator Jon Favreau gets the legendary bounty hunter out of the devouring sarlacc pit and into a lot of other trouble. Boba Fett (Temuera Morrison) is vulnerable in a way we haven't seen before: at the mercy of the Tatooine sun, of the acids in the sarlacc's stomach, of the annoying Jawas who steal his armor, and of a band of Tusken Raiders who capture him.

Most of the initial episodes rely heavily on flashbacks. Unlike recent shows like "Yellowjackets," which blends the past and present like an intense, meaty protein shake,  or "Station Eleven," which flashes back so hard and fast one can get whiplash, so much of "The Book of Boba Fett" is set in the past that you start to miss those long-gone days. Flashbacks feel more like the center of the show than the center of Mos Espa does.

In the past with the Tuskens, Boba Fett is at first a captive. He's bound. He's placed in the care of a child (Wesley Kimmel). But then, after Boba Fett kills a sand creature to protect the child, Boba Fett's status is elevated. Like a space "Dances with Wolves," Boba Fett slowly earns the trust of the tribe and vice versa.

There are problems here, namely: Is this veering into a colonial narrative? "The Book of Boba Fett" takes the conceptualization of "Star Wars" as a space western to the extreme, with a train robbery glaringly reminiscent of — you guessed it — "The Great Train Robbery." But it's troubling that this established, indigenous group basically elects Boba Fett as their singular spokesperson. It smacks uncomfortably of saviorhood, though possibly it's because he's the only one who can speak English.

One thing that works here is that nobody talks much.

The Tusken Raiders have a long, troubled history in "Star Wars." Also referred to by characters as the "sand people" and other derogatory terms, they are indigenous to the desert world Tatooine, and live in small groups as nomads. They wear wrappings of rough-looking cloth and protective headgear: masks, goggles, and respirators that obscure their faces, making them resemble, in the immortal lyrics of my favorite Bad Lip Reading song "Bushes of Love": "a chicken head with duck feet." They are a strange cross of very ancient looking and also, with that Burning Man headgear, kind of futuristic steampunk.

In the prequels, things get real dark with them real fast, as Anakin's mother dies graphically at their hands. You may also know them as the group that attacks Luke Skywalker in Episode IV.

Tuskens speak a language called Tusken, which is a combination of spoken and signed language. To those unaccustomed to the spoken part (that's us, the audience, and a lot of other "Star Wars" characters), their utterances sound like inhuman shrieks and guttural sounds. But Din Djarin (Pedro Pascal) in "The Mandalorian" communicates in fluent Tusken, as the show attempted to correct some of the franchise's earlier blunders in creating (and demonizing) the Tusken people.

Boba Fett seems confused by spoken Tusken. But he does pick up many of their signs, enough to communicate with them. That he would adapt to their signs rather than just expect them to speak his language is a good start.

Language doesn't have to be spoken. Many languages aren't, including American Sign Language, and "The Book of Boba Fett" scenes that feature little to no spoken English don't suffer. They're richer because of it. Perhaps we as viewers pay closer attention because we know information will not be telegraphed orally. We need to watch.

And we do as the Tuskens teach Boba Fett how to find liquid in black melons they dig out of the sand. Their offering a melon to him to drink is a meaningful gesture of trust, as is painstakingly teaching him the way they fight, and teaching him to make his own staff, which will serve him well later. In return, he instructs them on the riding of speeders.

Relative silence can be riveting, and these long, quiet scenes hint at the potential for other kinds of expression. We don't need a character to speak orally to understand them, and we also don't need to see their faces to care for them. Witness how compelling Mando was for episode after episode when he kept his helmet firmly on.

Joanna Bennett, a stunt performer who was the double of Captain Marvel (Brie Larson) in the movie of the same name, is riveting as the main Tusken warrior who takes Boba Fett under her wing. Strong and confident, her fighting looks like dance moves, and her dance moves look like fighting. (It should be noted that Morrison, who is part Maori, drew from his culture for some of the Tusken movement scenes.) Despite never seeing her face or hearing her utter a word I could discern, I rooted for her. I also knew her character was not a man, despite no one ever saying anything to that effect, because of how her clothes and headgear differed from other Tuskens, including Xavier Jimenez as the leader of the group, and Kimmel as the precocious Tusken youth.

It's meaningful that she has a position of authority among the Tuskens, that Boba Fett's mentor is a woman. Spoken words aren't necessary for their training, for the emotional connection they establish — or for the emotion connection we the audience establish with Bennett, Jimenez and Kimmel's characters. These quiet scenes are loaded with tension and meaning, which humanizes both Boba Fett and the Tuskens.

Much of the rest of the show falls flat, in part because we haven't gotten to know anyone else the way we have become close with Boba Fett and the Raiders. You realize how many spoken lines are unnecessary, poorly written noise, and how well someone can act without saying a thing. It's disappointing that this entire, rich backstory of the Tuskens seems to have been a build-up for . . . something? So far, it's unfulfilling and the ending of the Tusken group, unearned.

Before my child's "Star Wars" obsession and the nightly quiz game that kept me on my toes, before "The Mandalorian," I mostly remembered Boba Fett as the action figure everybody wanted and nobody could find. In the present scenes of "The Book of Boba Fett" where characters say a lot and mean nothing at all, we can't really find him either.