Frank deserves better than "Station Eleven." So do disabled stories

If anyone is built for surviving an apocalypse, it’s the disabled people who have been living it already 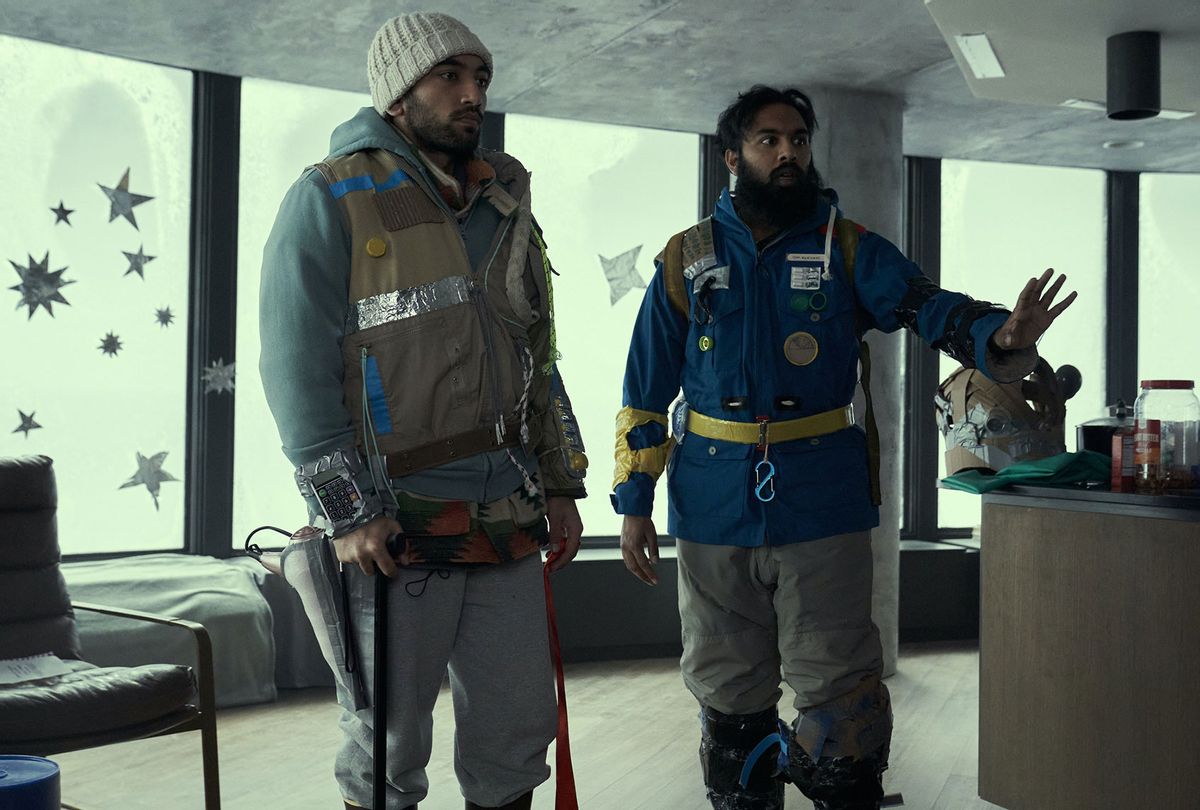 The following contains spoilers from "Station Eleven," including its finale.

A friend used to joke, darkly, that he never would have survived to adulthood a century or two ago. He wears contact lenses and has allergies. As a person who is half deaf, I wouldn't make it through the apocalypse, either, at least not according to the most popular fictions of coming dark times. The writers simply wouldn't let me.

"Station Eleven" is not kind to disabled people like me. Published in 2014, the novel by Emily St. John Mandel tells the stories of an ensemble of characters around the Great Lakes and their interconnected lives both before and after a devasting flu, a pandemic (hm, sound familiar?) that swiftly has a 99% morality rate.

One of those who survives is Jeevan Chaudhary (Himesh Patel), an underemployed freelance journalist and aspiring EMT whose brother, Frank (Nabhaan Rizwan), is a wheelchair user, paralyzed after being shot while working as a war correspondent. It is surprising, then, in the HBO Max adaptation of "Station Eleven" when Frank answers his apartment door standing upright. Frank does not use a wheelchair in the series. He is not paralyzed. Instead, he relies half-heartedly on a cane. With shrapnel in his leg in the series, rather than the bullet-severed spinal cord injury in the book, he says simply: "Someone tried to blow me up."

It's unclear why the decision was made to make a major character of "Station Eleven" less disabled. Yes, navigating a wheelchair in a small apartment would be difficult — that sounds a lot like real life where spaces are often not accessible. But it seems like the decision to minimize Frank's disability was made for the comfort of an abled audience. The cane is easy to forget. Half of the shots of Frank don't even show it.

RELATED: What "Hawkeye" gets right about deafness – and what it glosses over

The HBO Max show expands Jeevan's story. One of the ways the series deviates from the book is that a child actor Jeevan helps in the beginning, Kirsten, played as a young person by the confident and compelling Matilda Lawler and as an adult by Mackenzie Davis, who goes onto become the star of the series, sticks by his side.

That always struck me as strange in the novel: that Jeevan would get a child to safety as the pandemic, as deadly and apparently as fast as the zombie virus of "28 Days Later," ravages their city of Chicago — only to leave her, well, probably unsafe. Keeping Jeevan and Kirsten together for longer deepens their connection, and reinforces the backbone of the story, that of found family and making the best of dire circumstances.

The addition of the trio of the brothers and Kirsten also makes for some scenes achingly relatable to us now: the would-be family stuck together in the apartment, trying to ride out the virus. Frank becomes the child's de facto teacher, assigning a book report, and Kirsten, who performs tween sullenness to perfection, approaches remote learning with the same eye-rolling enthusiasm as my child.

Kirsten reads the same book over and over again, the titular "Station Eleven," a science fiction graphic novel written, illustrated, and self-published by Miranda (Danielle Deadwyler, who quietly anchors the show). It is odd that only one book would seemingly survive the pandemic, and a paperback at that. "Station Eleven" and Shakespeare is the only literature in this world? I love science fiction, but I'd rather be in an apocalypse that at least had some Marsha Norman and Anna Deavere Smith around.

But despite having many more scenes with Jeevan and Kirsten, Frank's story does not expand.

He's trying to ghostwrite a biography, much as the writers of "Station Eleven" are trying to touch upon — but not get too close to, that might be uncomfortable — the story of a disabled person. I can think of no greater metaphor here than ghostwriting, to pretend to have lived a life you have not.

Frank has an addiction problem, one that he seemingly and implausibly shakes off without too much difficulty, as the pandemic rages on and the trio is unable to leave Frank's apartment. In both the book and series, Frank is described as reclusive because of "the war." Frank describes himself as "sort of a shut-in" and says he gave up on journalism because "journalists have to go outside," obviously neither predicting our current era of work from home, nor knowing much about disabled journalists. Such depression could be believable, but it's not given the space to be explored. Frank's trauma is the least examined in a story whose very marrow is trauma.

As an actor, Rizwan is underused (as is the only openly disabled performer in the show, fire survivor Prince Amponsah, who radiates with energy and empathy in his few scenes as the Traveling Symphony's costumer). A scene where Rizwan busts into rap shows this actor was capable of much more life than the story gave him.

It's a story that ends badly for Frank, as most disabled stories written by abled people do. In the novel, Frank kills himself, after telling Jeevan bluntly that he's going to do it. And Jeevan does nothing to stop him. That's a clearly ableist view of what life is like for a disabled person, the notion that we are a burden to the abled people who love us, and it's better for everyone if we just die.

It also presents the disabled character as a martyr, that only in Frank sacrificing himself can Jeevan go on to live. It doesn't make much sense in the book, feeling like a thinly plotted excuse for the idealization of a marginalized character. Disabled people aren't villains. But we also aren't perfect saints. Yes, the characters are in a pandemic, but Frank can travel in his wheelchair. His decision to die seems as flimsy as Kirsten's cobbled-together rain gear.

In the HBO Max series, it makes even less sense. Frank walks with a cane — a disability mirrored by his brother later when Jeevan is injured in an attack, forcing him to rely on a cane pretty much exactly like Frank's. Weirdly, Jeevan manages just fine then (and travels great distances) as a disabled person. But Frank's character is still determined to sacrifice himself.

In the episode titled "Goodbye My Damaged Home" Frank meets death by home invader. His death feels like a waste and the moment lacks energy or believability. It would be one thing if Frank at least dies defending the young Kirsten or even his brother, but he doesn't. He simply kinda sorta stands there, after apologizing to Jeevan, while a man who breaks into their apartment stabs him after Frank mildly provokes the stranger on purpose.

My high school acting teacher would say this action lacks follow-through, but it doesn't have any motivation in the story, either. It's so lacking in believability that Kirsten, in the way of a child, blames herself — that by convincing the brothers to put on a play adaptation she has written of her beloved "Station Eleven," she somehow made this bad thing (which she doesn't understand for a long time to be the death of Frank, but simply his staying behind) happen.

It's fitting that Frank dies as the family was performing Kirsten's play, because the whole thing feels staged.

The abled gaze was always strong in the novel as well, where the character of Lily Patterson, a young woman unable to receive her medication Effexor, used for the treatment of depression, among other illnesses, simply walks off to die. She leaves her driver's license behind. Clark places it in his museum of objects from before the pandemic, and no more is said of Lily.

This sacrificial disabled person trope is a genre specialty, seen in a whole host of science fiction and fantasy from the gothic classic "The Hunchback of Notre Dame" to the 2021 film "Mother/Android." It's more unusual, virtually unheard of, to have a disabled character simply live.

This is a narrow view that we see happening in real-time during our own pandemic too, as some have dismissed the implications of long COVID, unable to imagine a lifetime of chronic illness or disability. That's a very black and white view of the world: that you are abled, or you are dead. But 61 million Americans, including me, live in the middle.

In a brilliant review, the writer Sim Kern describes "Station Eleven" as an "ableist fantasy" of a return to an agriculture lifestyle. Disabled people, after all, must often utilize technology, from hearing aids to prosthetics. A world without technology, as "Station Eleven" weirdly is, without even solar panels, except for the Severn City Airport, would be a world without many disabled people.

Failing to imagine how disabled folks are going to get by in your apocalypse is a failure to do the main job of an artist: to reflect and imagine the world, even an invented one. You don't have to be everything to everyone all the time — but you do have to remember that humanity is complex. Why would Frank, for example, have more trouble with long distances than Kirsten, a small and complaining child?

If anyone, disabled folks are the most resourceful, used to navigating a system that was already collapsing for us. Sidewalks didn't have curb cuts, a sloped side on the street to allow for wheelchairs (and strollers and scooters), until the 1980s. Disabled activists died to get them. Many buildings today are not accessible, despite the Americans with Disabilities Act. Many stages don't have ramps. Many videos don't have captions. Many disabled people are legally paid cents on the dollar, those who get hired at all.

Our news today is full of stories, presented as heartfelt but actually sickening, of disabled children building their own wheelchairs or raising money for classmates, denied by insurance, to have prosthetic limbs — or seniors jury-rigging a pulley to lift their wheelchair out of a building which doesn't have an elevator so they can leave the house.

If anyone is built for surviving apocalypse, it's the disabled people who have been living it already. If anyone is a survivor, it would be someone like Lily. Someone like Frank. Someone counted out and left behind long before the world went dark, used to finding and making their own way come hell, high water, or Georgia flu.