Lauren Ridloff as Makkari is a scene-stealer. Too bad Disney hasn't allowed certain audiences to watch her 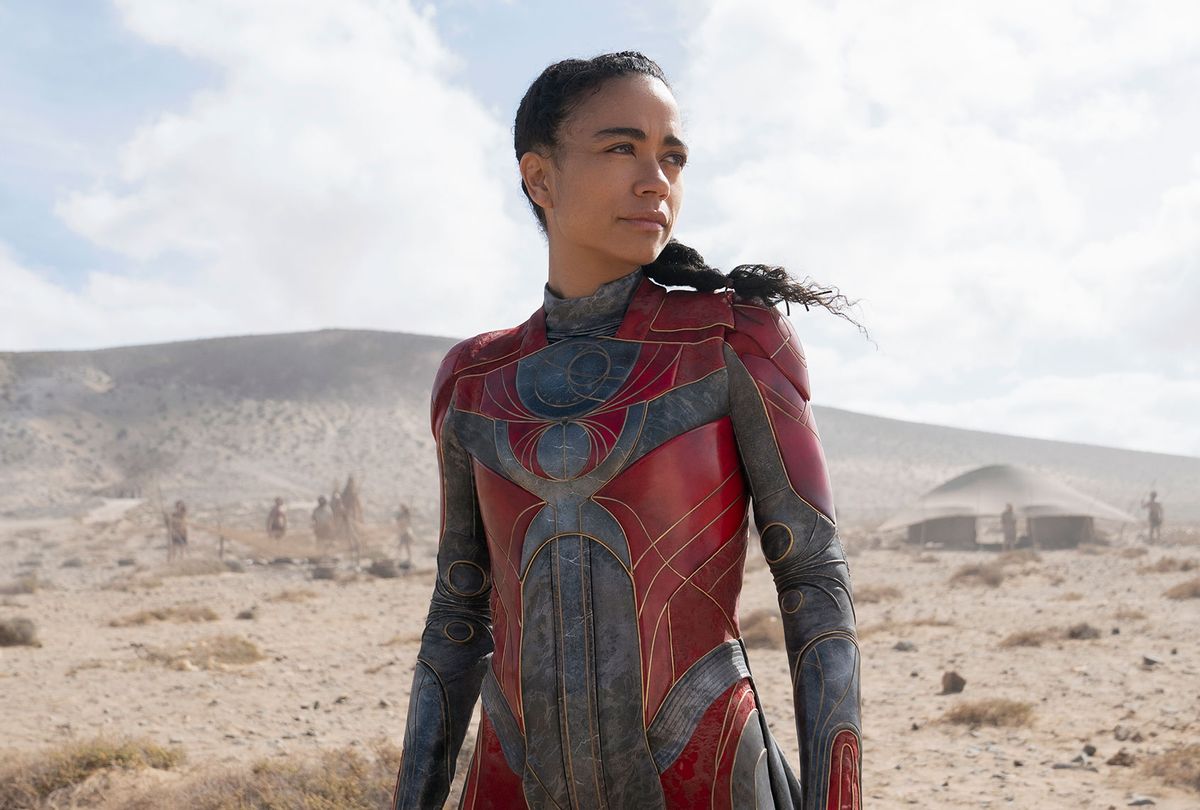 Chloé Zhao's "Eternals" has made history in a number of exciting ways, from being the first MCU movie with a (PG-13) sex scene, to featuring the MCU's first openly gay superhero and his family. In addition, the movie includes the first onscreen deaf superhero, Makkari, who's played on-screen by deaf actress Lauren Ridloff to great fan and critical acclaim.

"Eternals" follows 10 immortal beings with supernatural powers who've defended Earth from creatures known as Deviants for over 7,000 years. After centuries apart, the Eternals come together again to fight off a new threat that could spell the destruction of humanity.

Makkari is one of the Eternals who emerges as a witty, fiercely independent new hero with a mischievous spirit, and who has something of a budding romance going on with Barry Keoghan's charming fellow Eternal, Druig (Barry Keoghan). Like Ridloff, Makkari also happens to be deaf – a characteristic that developed later in the comic books after Makkari also changed from male to female. Each Eternal has at least one special power, and Makkari wields the power of superspeed, which fortunately isn't connected to her deafness, a common trope we sometimes see in TV and movies featuring characters with disabilities.

Even in well-meaning portrayals, we've often seen characters with disabilities dehumanized by stories that transform their disability into a superpower of sorts, making them otherworldly beings when they're just ordinary people. In "Eternals," Makkari's deafness is just one of her many pieces and qualities, which we can't wait to see further developed in a possible sequel or future appearances in the MCU.

RELATED: Making the "Only Murders in the Building" nearly silent episode

According to Comicbook.com, Zhao has also spoken up about what Ridloff taught her about deaf gain, or in Zhao's words, "the idea [that] there's something that she is capable of doing and experiencing with the world that I don't have a chance to experience. And that's something so beautiful." Deaf people and deaf characters like Makkari aren't tragic sob stories, and have different, sometimes more advantageous, experiences from hearing people.

From the romance between Makkari and Druig, to Ridloff's off-screen advocacy for the deaf community, representation for deaf and hard-of-hearing folks in Marvel's "Eternals" brings fans plenty to be excited about. But Marvel Studios' rollout of "Eternals" has ultimately let down the very people who are the most impacted by Makkari and Ridloff's inclusion, because they can't watch the performance in a theater, the only place the film is currently being released.

Fans have had to resort to crowdfunding to raise money for open-captioned viewing options for "Eternals," among other accessible options. We know Marvel has the funds to provide all this and more, and considering inclusivity has been one of Marvel's main selling points for "Eternals," it owes inclusive options to audiences.

In the days leading up to the Nov. 5 premiere of "Eternals," Gold House and CAPE's One Open launched a GoFundMe page for private, open-captioned screenings of the movie as part of the groups' community fund to support more and better representation of marginalized groups onscreen. The GoFundMe has raised thousands of dollars for deaf audiences and those with hearing struggles, but we should also be asking why the fundraiser was even needed. Marvel's marketing for "Eternals" has focused so heavily on the movie's first deaf MCU superhero — why isn't Marvel doing everything it can to ensure any and all deaf audiences who want to see the movie can do so?

To be clear, Zhao and Ridloff have both emphatically spoken up and supported more accessible viewing options for "Eternals" like open captions, and criticized widespread accessibility issues for deaf communities when it comes to most movies and theaters.

"It was very important for us to have closed captioning on the screen for the deaf community at our opening, and then also encouraging the theaters and making sure they do that as well," Zhao told Comicbook.com.

Ridloff also spoke on her and other deaf movie-goers' experiences trying to watch movies at theaters where they're "an afterthought" to the New York Times:

"We're an afterthought in movie theaters, and that needs to change. You have to use a special closed-captioning device to watch subtitling in a theater, and it's a headache, because most of the time the devices don't work. Then you have to go back to the front desk and find somebody to help, and by the time they figure it out that it's not working — that it's not going to be subtitled at all — the movie's halfway done."

Comicbook.com reports that AMC has "unveiled a plan to have a number of screenings with open captions for multiple films," and AMC's website reveals 35 states and Washington, DC offer open caption screenings at 240 different locations. But it seems worth pausing to reflect on why all screenings of "Eternals" can't just include open captions, and not just subtitles for when characters speak in sign language to accommodate hearing audiences.

As important a step forward as "Eternals" is for onscreen representation of deaf communities and people with disabilities, it's also a reminder that how we approach representation onscreen is as important as how we approach it off-screen. Who is Ridloff's brilliant performance of Makkari for, if not for deaf and hard of hearing audiences to be able to enjoy and see themselves as superheroes?

For onscreen representation to amount to more than just progressive bragging rights for exorbitantly wealthy and powerful film studios to capitalize on, it should be fully accessible to the marginalized people being represented — and not just with the help of GoFundMe pages or select movie theaters in 35 states. There's no reason for a movie with the first onscreen deaf superhero to not have the captioning needed to be accessible to audiences at all times, when the entire point of representation is to help underrepresented people feel represented.

Zhao has spoken openly about the many learning experiences that came with directing "Eternals," and how much she grew from working with Ridloff to bring Makkari to life. And there's clearly a lot for Marvel Studios to learn, when it comes to presenting stories with marginalized characters to the public in accessible ways in the future.

"Eternals" is now playing in theaters.