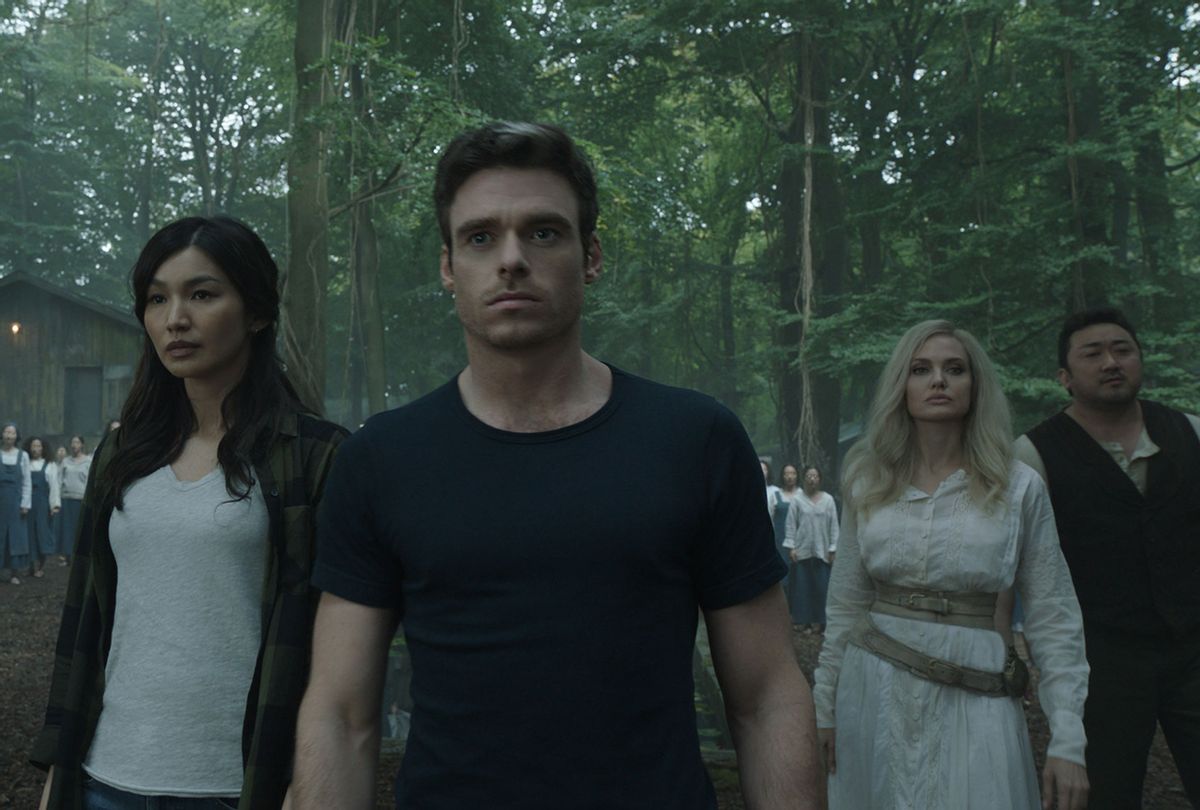 Expectations were high from the start for "Eternals," the latest installment of the Marvel Cinematic Universe's explosive fourth phase, and not just because the movie has been widely marketed as "different" from the usual fight scene and explosion-heavy Marvel flick. The hype around "Eternals" also benefited tremendously from the allure of Chloé Zhao as director, fresh off her Oscar win for "Nomadland" earlier this year, and with her well-earned reputation for magically bringing to life the stories of everyday people. It also didn't hurt that the cast of "Eternals" was stacked, featuring big names ranging from hunky "Game of Thrones" alums to Hollywood titans like Angelina Jolie and Salma Hayek.

To that end, "Eternals" certainly lives up to the promise of being unlike other Marvel projects — but it falls short of living up to the rest of the hype.

RELATED: "Nomadland" wins big at the 2021 Oscars, which made history — and some unfortunate choices

Picking up shortly after the events of "Avengers: Endgame," a group of supernatural beings known as Eternals must reunite to confront a new threat to humanity after spending hundreds of years apart. The Eternals were originally brought to Earth thousands of years ago by even more powerful, god-like, intergalactic beings known as Celestials, with the purpose of hunting down reptilian-like monsters called Deviants. Furthermore, the Eternals were instructed to never interfere with human affairs — including the recent battles against Thanos..

But even after destroying all Deviants, the Eternals remain on Earth, waiting for their next orders from their Celestial master Arishem (voiced by David Kaye), and trying to blend in as ordinary people along the way. Over the course of their time on Earth, spent periodically traveling to new civilizations to avoid suspicion about why they don't age, they bear witness to some of the most defining moments of human history, from landmark innovations like irrigation and the wheel, to devastating wars and disasters. Zhao's cinematography takes us on a resplendent, brightly colored journey through time, space and human civilization, all while delivering what Instagram influencers might call golden hour-galore: sunlit shots over pyramids, rivers, mountains, fields and charming little ancient villages.

The Eternals comprise Ajak (Hayek), their leader and maternal figure; Sersi (Gemma Chan), who has the ability to manipulate cosmic energy and change matter; Ikaris (Richard Madden), the strongest of the Eternals; Thena (Jolie), the beautiful but troubled goddess of war; Gilgamesh (Don Lee), who has what can only be described as super-strength, and acts as Thena's protector; Druig (Barry Keoghan), who has the power to control people's minds; Kingo (Kumail Nanjiani), who can shoot lasers from his hands and takes on the lofty task of providing much of the movie's comedic relief; Makkari (Lauren Ridloff), who has super speed and, like Ridloff, is deaf; Phastos (Brian Tyree Henry), a literal tech wizard and the MCU's first openly gay superhero; and Sprite (Lia McHugh), a tricky illusionist trapped in an adolescent girl's body.

Some of the Eternals have adjusted to life among humans more smoothly than others. Sersi in particular develops a deep love and kinship with humanity and Earth, as a teacher at London's National History Museum. Thena, on the other hand, begins to suffer from an existential sort of mental illness that can come with being an immortal being. But when Deviants mysteriously reappear on Earth, the Eternals must reunite for the first time since a devastating event pushed them apart hundreds of years ago, for a race against time to save the planet they've grown to love.

In many ways, what it means to be human is the central question that drives "Eternals," as our heroes struggle to reckon with what makes this planet worth saving, and who and what they really are beyond soldiers sent by the all-powerful Celestials. But the movie's dizzying star power and twisty backstories render it too clunky and overstuffed to concisely answer said central question.

The Eternals watch as over time, humans commit shockingly atrocious and shockingly gracious acts, and come to understand that humanity's mistakes, bonds, and ability to evolve are what make them human. It's a beautiful message, especially as the exciting diversity of the cast speaks volumes about the breadth and range of humanity in its own way. Unfortunately, this uplifting message about humanity gets lost, somewhere between trying to remember who has what superpowers, what the Deviants want, and the chronologies of varying flashbacks.

None of this is to say "Eternals" doesn't have its bright spots. In some ways, the movie draws its strengths and weaknesses from the same source: its large, brilliantly talented cast. Henry's Phastos may not be the main protagonist of "Eternals," but his cynicism and heartbreak with the ways humanity has weaponized innovation ground the movie in reality more deeply than many other Marvel projects. From Hiroshima to Facebook's role in elections, we continue to witness and struggle with the devastating pitfalls of technology every day. As Phastos, Henry's alternating performances of intense emotion and subdued pessimism mirror our own conflicting feelings about living through what feels at times like the end of days.

Chan's Sersi is decisively the main protagonist of "Eternals," and stands out as a promising and triumphant new leader in the Marvel Cinematic Universe. Her devotion, compassion and uncertainty with her own leadership and powers make her one of the most relatable members of the MCU's growing roster of feminist superheroes.

But while Sersi is the heart and emotional core of "Eternals," she's well supported by other immortal scene-stealers. As Kingo, Nanjiani begins to fill the void of humor, wit and charisma left by the late Tony Stark, with the zesty, added twist of plentiful Bollywood references, and a dazzling Bollywood dance number that joyfully reminds us the age of all-white superheroes is over. Kingo's banter and charming obsession with image and self-promotion help "Eternals" along as it suffers at times under the weight of its heavy, existential themes.

Opposite Kingo, Jolie's resonant performance of Thena offers a convincing portrayal of mental illness and guilt. Those who struggle with trauma and loss can relate to Thena's simultaneous aloofness and intense vulnerability, stemming from distrust of herself and her own power.

Ridloff as the charming, witty and determinedly independent Makkari is destined to be a new MCU fan favorite. Makkari's deafness is neither treated as unimportant, nor made into a focal point that otherizes and dehumanizes her, as many well-meaning portrayals of characters with disabilities often do. Her deafness is instead treated as a beautifully normal part of who both Makkari and Ridloff are.

Ultimately, brilliant performances from a dynamic cast can't save "Eternals" from its rushed, almost claustrophobic conclusion, during which a number of characters' actions and decisions either feel illogical or inconsistent with everything else we've seen from them. It's not unusual for MCU films to end with cliffhangers or direct setups for sequels and future Marvel projects, but the conclusion of "Eternals" hardly feels like a conclusion at all — it's more like a rapid, congested sequence of awkwardly choreographed fight scenes, and revelations that leave audiences with more questions than answers.

Since "Avengers: Endgame" marked the end of the road for some of the most beloved heroes of the MCU, Phase 4 has focused largely on exploring who will fill the voids they've left. "Eternals" stands out as a triumph for diverse storytelling and representation, but its depth and pace are severely hindered by the same cast and outstanding star power that give the movie its spark. Still, "Eternals" lays exciting groundwork that hints at just how enormous and unexplored the rapidly expanding multiverse is, and also introduces us to some of the MCU's most charming and nuanced new heroes yet.

"Eternals" is now playing in theaters. Watch a trailer for it below, via YouTube.