“The one natural resource the world has too much of [is] girls," the movie's patriarchal antagonist says 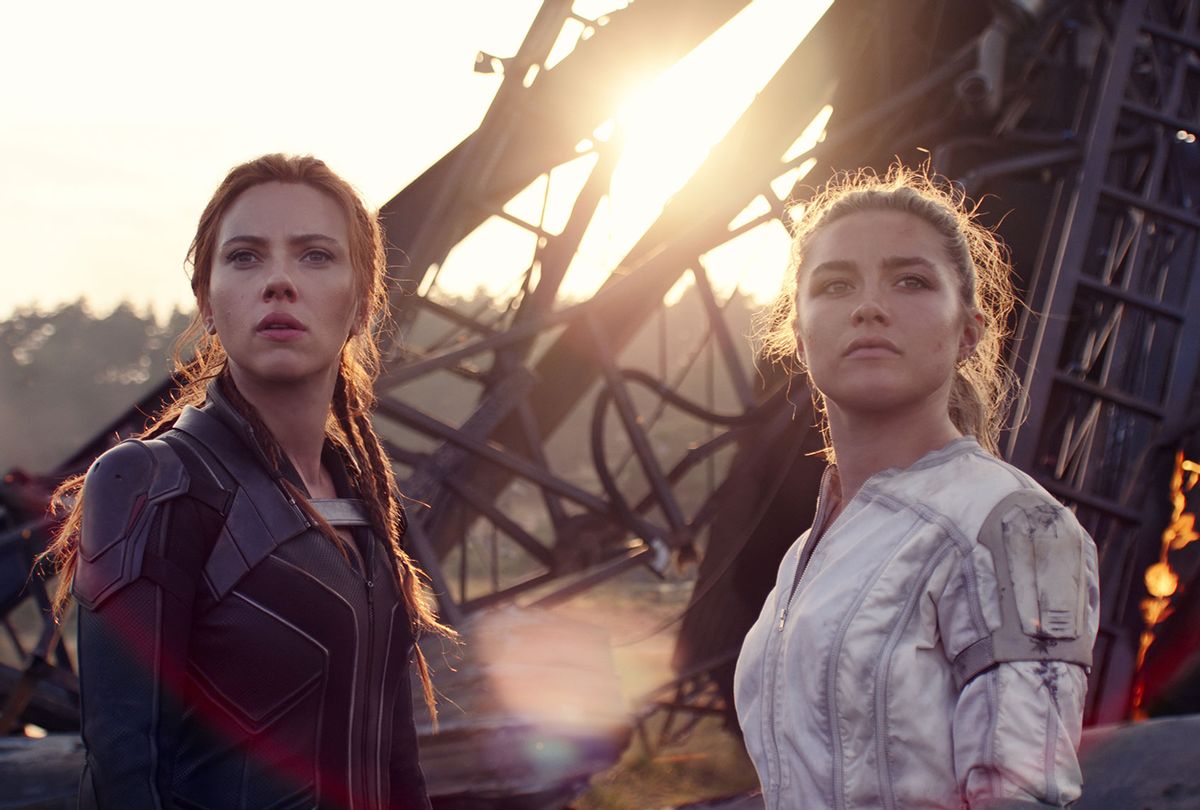 It feels reductive to call "Black Widow" a highly satisfying female revenge fantasy — not when the movie goes to great lengths to treat its male, human trafficking antagonist as a small and ultimately unimportant man. The real story of "Black Widow" is one of women's liberation, and family — biological or not — in all its loving, dysfunctional forms.

In the Cate Shortland-directed film, Scarlett Johansson reprises her role as Natasha Romanoff, an agent and assassin trained by Russia's all-female Black Widow special ops program at the covert Red Room base. She defected to the U.S. and eventually joined the Avengers before her iconic — and controversial — death in "Endgame." As a prequel, "Black Widow" takes place between "Captain America: Civil War" and "Avengers: Infinity War," during the years the Avengers disband and Natasha is on the run. In that brief window of time, Natasha receives a cryptic package from her long-lost adoptive sister, the formidable Yelena (Florence Pugh), launching the two on a journey to free the latest generation of Black Widows who are subject to total physical and biological control by General Dreykov (Ray Winstone).

While "Black Widow" is the story of the physical liberation of the Widows, it also tells a story of liberation from society's narrow definition of womanhood, and women's worth and morality as tied to reproduction. Early on in the film, we return to the controversial revelation from "Avengers: Age of Ultron" that as part of her "graduation" from the Red Room, Natasha was forced to undergo an unwanted hysterectomy as part of her transformation into, in her own words, a "monster." The phrasing was more than a little offensive to people with fertility struggles or women who just don't want to be parents, and shouldn't be deemed "monsters" for it.

But sexist throwaway line aside, the Red Room's rationale for this violating act was that the only thing a Widow could supposedly have more loyalty to than her mission is a baby; her infertility is what supposedly allows her to transition from human woman with a conscience to an unencumbered killing machine. This premise in itself relies on patriarchal assumptions and gendered essentialism about women, that there is nothing more innate to us than the desire to be mothers, that motherhood is instinctive, and we are mothers, foremost, before friends or anything else.

Parallels between the story of the Widows and real-life human trafficking are rampant and obvious, and it's impossible to ignore the gutting feeling of sexual violation watching Dreykov exert total control over his Widows' bodies, and program away their ability to fight or resist him. Moreover, these women aren't even merely "objectified" — objectified women are often looked upon, sexually admired. Rather, the Widows are this man's tools for violence, expendable weapons to be thrown at any number of dangerous situations, exposed to extreme violence and cruelty, without care.

"To him we are just things, weapons with no face that he can just throw away because there is always more," Yelena tells Natasha.

The Black Widow program is specifically gendered; it not only takes advantage of how patriarchy treats women without families as societally useless and expendable, but also takes this misogynistic conception to an extreme wherein women's bodies are "natural resources." While the program itself may be fictional, the disdain for non-mothers and violent patriarchal control of women's bodies are all too real.

In our own non-Marvel world, women and pregnant-capable people are scorned for lacking "maternal instincts," for having abortions, for being selfish if they don't want kids, while also being shamed for miscarriages and fertility issues. A state legislator from Oklahoma justified his nightmarish abortion bill by non-ironically calling women and pregnant people "hosts." Abortion bans and birth control restrictions are passed at the same time that conservatives treat even small declines in the national birth rate as the literal apocalypse, because women remain regarded as "natural resources," incubators, even here in the US.

The cultural and political coercion, control, and violence to which women are routinely subjected is so intense, so ingrained, so prevalent, that most of us could at least on some level relate to Yelena's joy at having the freedom for the first time in her life to do something as small as buy a vest. When Natasha can't understand how Yelena could treasure such an abjectly ugly clothing item, Yelena explains, "I've never had control over my own life before and now I do. I want to do things."

The Widows' stripped reproductive abilities are most overtly discussed when Natasha and Yelena's crude adoptive father Alexei (David Harbour), with whom they reunite after nearly two decades on their quest, jokingly suggests they're being cold to him because they're on their periods. In response, Yelena hisses, "I don't get my period, dipsh*t. That's what happens when the Red Room gives you an involuntary hysterectomy. They just go in and rip out all of your reproductive organs, chop them all away." Her rebuke and candor are far and away funnier than any misogynist period joke ever told, making Alexei wonderfully uncomfortable — and reminding how many women and survivors like the Widows can find liberation from trauma through humor.

Reuniting with Yelena brings forth a reckoning with how she and Natasha were raised – in a "The Americans"-style sleeper family in which matriarch Melina (Rachel Weisz) is a Red Room graduate herself, assigned to play wife to Alexei and mother to the girls. When their cover is blown in 1995, the two young girls are put into the Black Widow program, never to see their parents again until now, as adults.

In a quietly rueful yet otherwise humorous sisterly conversation while they stop for dinner outside a car repair shop, Yelena discloses the fake story about her family that she often gives to strangers. "You're a science teacher. You're working part-time, though, especially after you had your son," she tells Natasha, who responds, with a small smile, "That is not my story."

It's not — because it literally can't be.

Natasha's death in "Avengers: Endgame" drew fierce debate since it was set up as a choice: the death of Natasha or Clint Barton, aka Hawkeye (Jeremy Renner), as a sacrifice, in order to obtain a crucial Infinity stone. The two fight each other to be the sacrifice, and in the end she "wins" and rationalizes the decision because Clint will be able to return to his family.

On the one hand, the act showed Natasha's fearless and sacrificing nature, her commitment to The Mission until the very end. On the other, it treated her as the more expendable one by emphasizing Clint's family, since society adores family men as much as it loathes childless women. And while the events of "Endgame" can't be undone, "Black Widow" offers a rebuke to its MCU predecessor, asserting that Natasha's two families — her adoptive Russian spy one and the Avengers — are families, even if they're not biological. No one type of family is more valid, more valuable, than another.

"Black Widow" is a complex ode to modern feminism, exploring the chilling ways women are socialized and, in this movie, literally wired to harm other women under patriarchy. Yet, the movie ultimately concludes that the most essential part of being a liberated women is liberating other women, which Natasha and Yelena risk their lives to do. It's an affirmation that women who don't or can't have kids, and broadly, women and girls who lack biological families, are not disposable. Family, children and certainly not reproductive organs aren't what make a woman a whole human being, and our humanity and worthiness can't be measured by this patriarchal standard.