From cameos of your favorite Hong Kong stars to dragons and man-eating forests, welcome to the magic of "Shang-Chi" 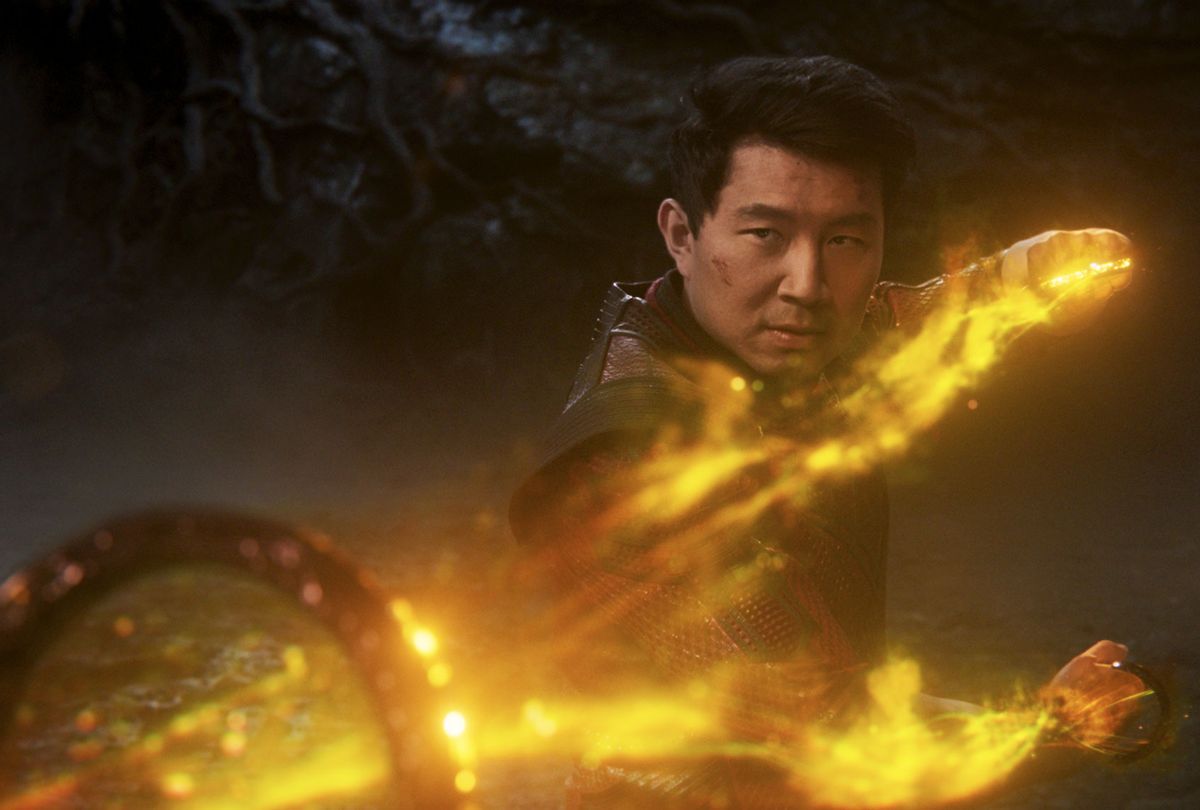 Simu Liu, the Chinese-Canadian actor best known for starring in the unapologetically Asian sitcom "Kim's Convenience," famously tweeted his brand new role as the latest Marvel hero into existence. In 2014 and 2018, he tweeted at the studio, first inquiring about when we would get our first Asian-American hero, and next shooting out a simple, pithy, "OK @Marvel, are we gonna talk or what #ShangChi?"

"Shang-Chi and the Legend of the Ten Rings" is now in theaters with Liu in the starring role. So, who says #KeyboardActivism can't spark major representational change? In this latest MCU project, we're finally introduced to a brand new Avengers-tier hero, and Liu's Shang-Chi is worth the wait.

Directed by Destin Daniel Cretton ("Just Mercy"), the film is rife with edge-of-your-seat action, jaw-dropping visuals (think: dragons and magical, man-eating forests), and fun cameos of beloved Asian stars and previous Marvel fan-favorites alike. The martial arts masterpiece is the first of its kind for the MCU as we're presented with a new kind of hero, with the heart — and kung fu mastery — to begin filling the void left by the late Steve Rogers, Tony Stark, and Natasha Romanoff.

When we first meet Shang, he goes by the name Shaun, a charming if unassuming young man working as a San Francisco hotel valet with his childhood best friend, Katy (Awkwafina). The pals seem uninterested in pursuing more in life than what they've got — parking rich people's cars by day, and partaking in drunken karaoke bashes by night. But on a particularly fateful bus ride to work one morning, Shang's past catches up with him, propelling them both on a quest home to China.

There, Shang reunites with his long-lost sister, the formidable and rebellious Xialing (Meng'er Zhang). Together they uncover ancient secrets, subdue the ruthless agenda of their father Wenwu (Tony Leung) and of course, save the world. Shang must also reckon with who he really is by revisiting the clandestine Ten Rings Organization that trained him – reminiscent of Black Widow's notorious Red Room – while confronting some of his deepest regrets.

"Shang-Chi" is at its most thrilling when it emulates the authentic fighting styles, creative choreography and sage wisdom of the classic kung fu movies. In a couple cases, this means that we get to witness Hong Kong greats like Leung and Michelle Yeoh return to their elegant, wuxia-inflected roots – while letting their personalities highlight their moves. However, the film is also teeming with aggressively fun and modern fights as well, letting the new wave of action stars step up. One of the most thrilling set pieces includes an adrenaline-fueled bus brawl packed with endless kicks, flips and martial arts tricks against a rather intimidating and enhanced opponent. Also, immediately upon arriving in China, Shang is caught in a fight to the death on the bamboo scaffolding of a skyscraper. These are merely a handful of the many exhilarating encounters in the movie that is wise to present a range of styles and tones, unlike some martial arts projects that revisit the same well over and over again.

But "Shang-Chi" is also tenderly grounded through the warm and humble comedy of its leads. Liu and Awkwafina effortlessly riff off each other about the struggles of being the children of Asian and immigrant parents with high expectations, and often defend the valiant, underappreciated profession of valeting. Their lighthearted exchanges and palpable chemistry lightens the mood when the film wanders into dark places. And while their sweet friendship may seem prosaic it's unheard of, even monumental, to see an Asian superhero whose daily routine includes a dim sum breakfast with his best friend's family while simultaneously dodging their overly familiar questions

In contrast to that warmth, Leung brings his decades of playing smoldering leads for Wong Kar-wai and in action flicks to deliver an intense, eerily convincing performance of an all-powerful mob boss. And since this is a movie that delves into the messiness of family, he's even more fearsome as Shang and Xialing's stern, unimpressed father. In Wenwu, we see a man whose all-consuming grief has morphed him from a loving family man into a stone-cold killer.

Meanwhile, the aforementioned Yeoh comes full circle from when she first showed up on America's radar as an action star. Her most recent roles – as the stern but loving "Crazy Rich Asians" matriarch and badass on "Star Trek: Discovery" – somewhat meld together here. As Jiang Nan, the siblings' ethereal aunt and a martial arts master herself, Yeoh rebrands from a mama bear trying to protect her family business to a formidable guardian of a lost city trying to protect the world.

And not to be outdone by her more established co-stars, Zhang as Xialing firmly stands her ground to round out the cast. She presents as an unflinching yet compassionate fighter, who can more than hold her own in the male-dominated martial arts scene.

Where "Shang-Chi" stands in Marvel's transitional Phase 4 and greater future remains to be seen. But many are already clumsily comparing it to the triumph of 2018's "Black Panther." Besides being reductive about leads of color, the comparison feels awkward and not fully earned — Liu doesn't quite evoke the generational charisma or on- and off-screen regality of the late Chadwick Boseman. Nor does "Shang-Chi" confront political realities like imperialism and the undying conflict between reformists and revolutionaries like "Black Panther" does. Still, Liu and Shang are both perfectly likable characters and entertaining fighters who adeptly usher in a fun, new dimension of Marvel storytelling.

"Shang-Chi" presents a riveting tale that's at times heavy on flashbacks, but unwavering in its fundamental conflicts and revelations on trauma and loss, on family and regret. It's an unapologetically Asian story about an unapologetically Asian superhero, but Shang's core struggle with his mixed emotions toward a family member that's harmed him is fundamentally relatable.

Like any other Marvel hero, Shang has a past he'd rather forget, but can't seem to shake off. And he may be the first, major Asian Avenger-like hero, but Shang is also a beneficiary of significant male privilege, which he awakens to over the course of his journey. In this way, the movie is a multidimensional tale of identity and power. It's a historic first with a degree of self-awareness that so many more barriers remain waiting to be broken.

"Shang-Chi" is also a triumph in subverting western stereotypes of grand eastern mysticism. Longtime Marvel fans will be delighted by the film's callback to a particular storyline from "Iron Man 3" involving one of Tony Stark's (Robert Downey Jr.) antagonists. Nearly 10 years later, "Shang-Chi" relentlessly pokes fun at the west's casual racism. Its arresting visuals also convince audiences of the vast beauty and charm of the east's oh-so-scary, foreign lands. Here, there are colorful and beautiful mystical creatures aplenty, rivers and fields seem to glitter in silver and gold, and the traditional elegance of martial artists' garb gets a luxe, dragon-scaled makeover.

Off-screen, "Shang-Chi" has notably been the subject of several minor controversies, including important criticism of its inclusion of Awkwafina despite accusations of her using "blaccent" and appropriating Black culture to advance her career. Liu himself has sparked internet debate over his disappointing comments on "radical" politics in "The Falcon and the Winter Soldier." Disney CEO Bob Chapek has been publicly and righteously called out by Liu and Marvel fans for comments dubbing "Shang-Chi" an "interesting experiment" with its theatrical-only release, seeming to treat the first Marvel film with an Asian lead as expendable.

These conversations are certainly important, but feel distant from the magic that unfolds onscreen. The movie is a universal story of family, and how complicated familial ties can be; it's a universal story of grief, and how the ones we love never really leave us. And in a post-"Endgame" world in which half of all life can be wiped out with a snap, "Shang-Chi" is a story of new heroes, who must rise up and face a precarious but infinitely magical reality. Wherever Shang's journey through a rapidly expanding multiverse takes him next, fans can only hope his sister and best friend — and hopefully more epic dragon rides and bus-breaking martial arts demonstrations — will follow.

"Shang-Chi and the Legend of the Ten Rings" is currently in theaters.