Before "WandaVision," there was "Agent Carter," and it was Marvel's best show

Marvel's strongest, most satisfying shows have always been about women 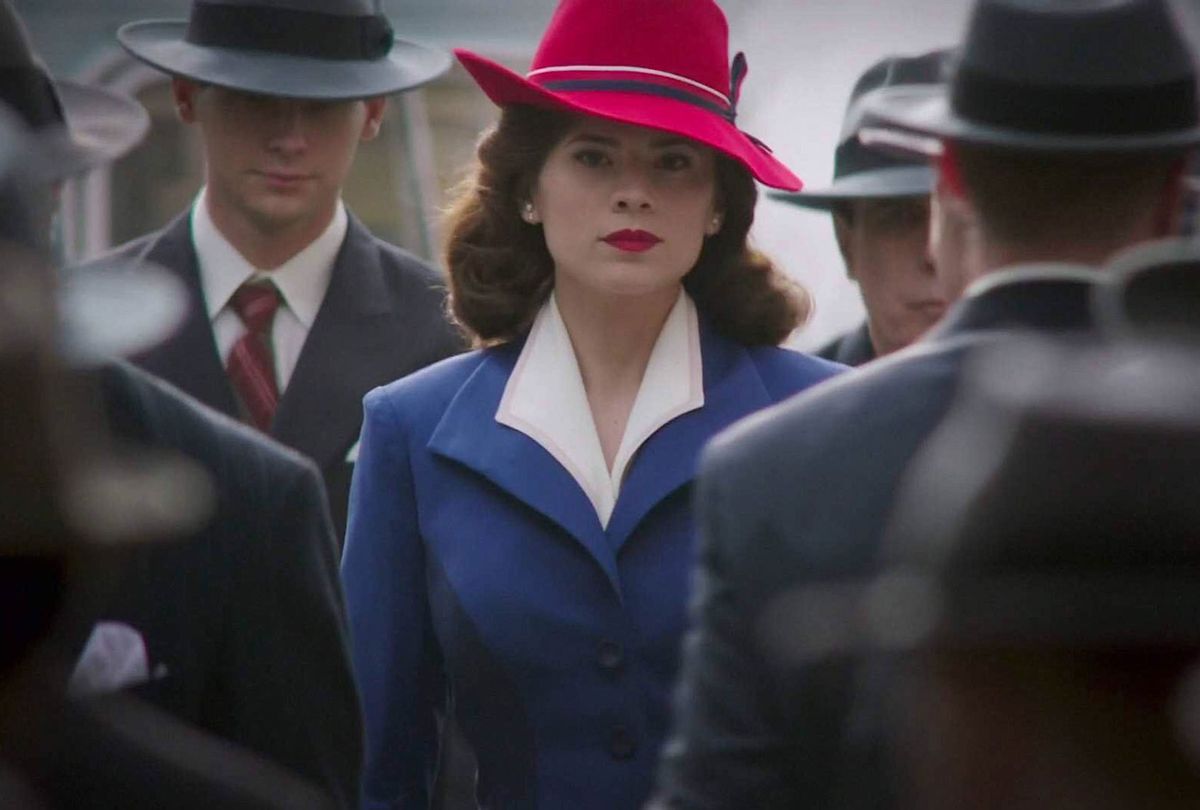 The following story contains spoilers from the MCU films up through "Avengers: Endgame"

"WandaVision," Marvel's first live-action series to be fully integrated within the interconnected and ongoing storylines of the films of the Marvel Cinematic Universe, has captivated audiences since its debut on Disney+ earlier this month. The series, which stars Elizabeth Olsen and Paul Bettany as Wanda Maximoff and Vision, respectively, is an homage to classic sitcoms, with the two lovebirds moving through different decades in television history in each episode for reasons viewers don't fully comprehend yet. But we don't need to know why the two appear to be starring in their own sitcom to appreciate the fact the series is able to do what no movie has ever done before: explore the characters and their romance and relationship in deep, meaningful ways.

While certain Marvel characters like Tony Stark (Robert Downey Jr.) and Steve Rogers (Chris Evans) were given plenty of screen time across multiple films to explore their characters' emotional baggage and development through deeply personal story arcs, writers Christopher Markus and Stephen McFeely were forced to develop Wanda and Vision's romance in quiet, stolen moments between rounds of action and fight sequences in both "Captain America: Civil War" and "Avengers: Infinity War." They did an adequate enough job that by the time Vision sacrificed himself to stop Thanos (Josh Brolin) at the end of the latter film, his connection to Wanda lent a decent amount of emotion to the scene.

However, it wasn't as effective as Tony dying to save the universe or Cap traveling through time and getting a happy ending. Thankfully, Wanda and Vision are now getting their time in the sun. However, this isn't the first Marvel series to develop vitally important supporting players from the films through television.

In January 2015, ABC launched "Agent Carter," a 1940s-set spy series starring Hayley Atwell as her "Captain America: The First Avenger" character Peggy Carter, and until "WandaVision," it was the best Marvel series. ("Jessica Jones" deserves to be commended for its excellent first season, but the character and the show are ultimately too far removed from the stories of the MCU films to be comparable here.) The eight-episode first season of "Agent Carter" was the first major project set within the Marvel Cinematic Universe to be headlined by a woman – which was distressing for fans of Scarlett Johansson's Black Widow, who was introduced in 2010's "Iron Man 2" – but despite the low ratings for the series, it served as a proof of concept for the future.

Created by Markus and McFeely, the series, which aired during the midseason hiatus of "Agents of S.H.I.E.L.D.," was set in 1946 in the aftermath of World War II and Steve's apparent death at the end of "The First Avenger." The premiere used archival footage of Evans from the film to set up its story, creating a direct link with the films that no other Marvel series, not even "Agents of S.H.I.E.L.D.," which resurrected Agent Coulson (Clark Gregg), has been able to boast about until now.

Showrunners Tara Butters, Michele Fazekas, and Chris Dingess then used the blueprints of the film and the subsequent Marvel One-Shot "Agent Carter" to develop a complex, layered story that took every advantage of the extended running time afforded by serialized television to thoughtfully explore not only Peggy as a person, including her lingering grief over Cap's demise, but also the challenges and triumphs she experienced during her career as the first female agent of the Strategic Scientific Reserve (S.S.R.). In the writers' hands and with eight 40-minute episodes at their disposal (18 if you include the 10-episode second season), Peggy became a fully developed, competent woman who excelled in a world dominated by inferior men. And she did so outside of the context of her relationship with Captain America, erasing any lingering doubt that she might have just been a really exceptional, charming, and intelligent love interest.

The series did all of this by tackling several difficult but universally familiar topics, like sexism in the workplace, which is still relevant in 2021, and the search for one's purpose, especially after the war. The writers also never passed up an opportunity to prove the show's eponymous heroine was the smartest and most capable person in the room. And while the series worked because of Atwell's dynamite performance, the writers smartly surrounded her with characters who were either familiar to viewers, like Dominic Cooper's young Howard Stark, or who would work as a support system without stealing the show, like James D'Arcy's Edwin Jarvis, the man for whom Tony Stark would later name his artificial intelligence, and Enver Gjokaj's Agent Daniel Sousa.

The links to the Marvel films could not have been more clear, but fans ultimately didn't show up for "Agent Carter" the way they seemingly have for "WandaVision." It's easy to blame it on the fact Marvel didn't consider it to be on the same level as the films, and thus didn't market it as such. But another explanation for the different reception is the disconnect between the events of the series and the ongoing films, a consequence of its period setting. While this could be seen as a strength — it meant the series could be viewed as an extension of the MCU or a standalone series, depending on the viewer, so one's knowledge of the MCU didn't much matter — it also meant it was not imperative that viewers tune in every week.

And one of the reasons the MCU has become so successful, in addition to its storytelling, is because each new film (and now TV show) has tied into the other films in some way. Even "Agents of S.H.I.E.L.D." dealt with the fallout of the events of the films, like the major HYDRA reveal in "Captain America: The Winter Soldier." The show even staged a few appearances from characters like Nick Fury (Samuel L. Jackson) and Maria Hill (Cobie Smulders) over the years to make it feel somewhat connected to the ongoing arcs of the movies to get people to tune in. "Agent Carter" naturally had a more difficult time doing this, so despite being connected to the films in several major ways, it was not deemed necessary – not by the network, not by Marvel, and thus not by fans. And that's a shame, because what the writers created was as vibrant and fun as Peggy herself.

Why bring this up now? Because "WandaVision" is essentially following the same formula and functioning in the same capacity as "Agent Carter" once did. Although the series will tie directly into the upcoming "Doctor Strange in the Multiverse of Madness" and the third Spider-Man film, it can also stand on its own as a separate property. Viewers, at least thus far, haven't required additional knowledge of the MCU to enjoy the series, largely because it's so different from what has come before. Like "Agent Carter" and even "Jessica Jones" before it, the show succeeds because it doesn't feel like a traditional Marvel superhero product. It's trippy and fun, playing with reality in ways that explore television as a form of comfort as Wanda seemingly creates her own illusion of a happy life in order to survive her grief over Vision's death in "Infinity War," which came on the heels of losing her twin, Pietro (Aaron Taylor-Johnson), in "Age of Ultron."

As any comics fan can tell you, Wanda is one of the most powerful characters in the MCU, but because she's been forced to be a supporting player in other (white male) characters' stories over the years, Marvel hasn't been able to, or simply chose not to, explore the full scope of her abilities before now. Much like how "Agent Carter" successfully revealed the depths of Peggy Carter in the wake of a loved one's death, so too is "WandaVision" building out and revealing the inherent strengths of its own female lead in much the same way. It's even bringing in familiar faces from the MCU the way "Agent Carter" did. Kat Dennings' Darcy Lewis and Randall Park's Agent Jimmy Woo both appear, while new characters, like Kathryn Hahn's Agnes, are bound to have lasting impacts on fans if not the future of the extended universe. In some ways, it feels like "WandaVision" is what "Agent Carter" could have and should have been all along.

However, "WandaVision" also feels like a natural and necessary next step in the evolution of the Marvel Cinematic Universe, which is now in Phase 4. So perhaps what's most interesting about the show is what it ultimately means for Marvel moving forward. The lines between television and film have become increasingly blurred over the years, a development that has launched a thousand Twitter wars about what is considered TV and what is considered cinema. There's no real drama surrounding "WandaVision" — it is episodic television made for a streaming service, with each episode telling a serialized but self-contained story, but it's also intrinsically linked to the films of the MCU, building off the events of previous movies and setting up a couple more. In doing so the show is further blurring lines that have already been quite messy. And with several more Marvel series set to debut on Disney+ just this year, it's really only the beginning.

"WandaVision" releases new episodes on Fridays, while the full run of "Agent Carter" is available to stream, both on Disney+.