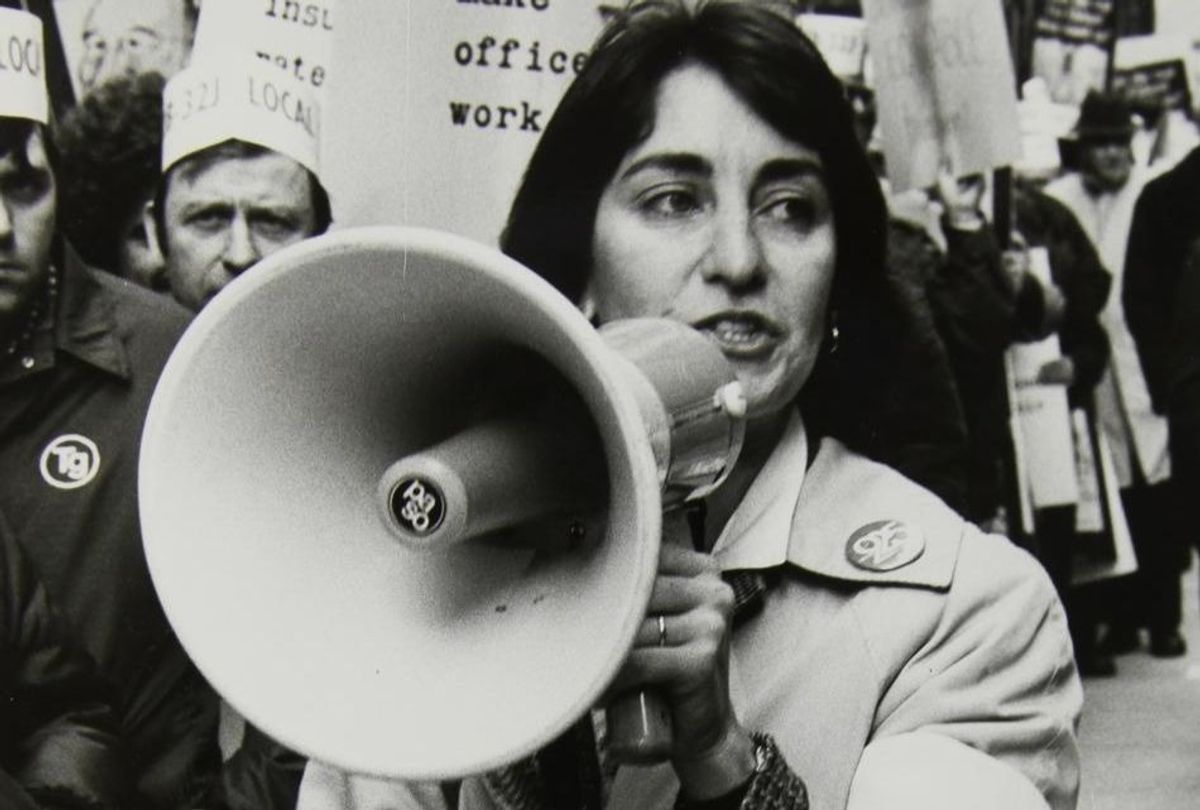 "9to5: The Story of A Movement," directed by Steven Bognar and Julia Reichert – who previously spoke to Salon about their Oscar-winning documentary "American Factory" – recounts how women office workers, starting in the early 1970s, fought for equal pay, equal rights, and respect. Female office workers were generally asked for fetch coffee, run errands, and write letters for their male bosses — all responsibilities that would fall outside their job descriptions if they even had one.

Even worse, women workers were frequently subjected to racial discrimination, sexual harassment, and could be fired for getting pregnant. They had little or no health care benefits. If they had a problem with a boss, they had nowhere to go. Moreover, even if complaints were heard, nothing changed.

Bognar and Reichert's film generates both righteous anger and optimism as it tells the story of the women who fought for change. Karen Nussbaum and Ellen Cassedy were the co-founders of "9to5," an organization that published a newsletter for women office workers in Boston. They fought for health care, promotions, and respect, but had little success outside of generating interest from other female office workers. Then they really organized and became empowered. They started having concrete victories with wages and developed an "office workers' Bill of Rights." 9to5 eventually went national, and even unionized, transforming the labor movement. As they became District 925, they had another series of heartbreaking setbacks and successes.

"9to5" chronicles this movement's history, one that inspired the Jane Fonda-Lily Tomlin-Dolly Parton film and its theme song that became the women office worker's anthem. Fonda herself appears in the documentary and recounts her need to make the hit comedy after hearing stories of women office workers being demeaned.

Salon spoke with Julia Reichert about their new documentary, which will screen as part of AFI DOCS on June 19.

Can you describe a job you had where you felt demeaned by a male boss?

Ha! In the 1960s, when I was a copyboy for the "Cleveland Press" — and we were all called copyboys; the writers were all men – they would comment on how we looked if we were getting them coffee. They'd give us a pat on the behind. It was commonplace. We didn't have a word for sexual harassment. You were hoping to get a chance to write a story, so you wanted to please everyone.

You recount a few horrific stories of a woman being asked to sew the crotch of her boss's pants while he was still wearing them, as well as testimonies of women being pinched, slapped, and even raped. What can you say about the criteria you had for what stories were recounted?

One we didn't include was from a woman who was asked to clean a guy's dentures. Even when women were trying to organize a union, they would get pinched, be called "girl," and patted on the head by union leadership within the labor movement. Regarding the demeaning tasks women do for their boss, women didn't have a word or name for talking about the boss staring at my boobs, patting my ass, or trying to hug me. They think, "It's partly my fault." No one said, "This is how I feel." 9to5 was a new force that drew from the women's movement and the labor movement and it challenged both movements to look at class, race, and sexism.

The guy whose pants are sewn is seen in a clip in the film putting his arm around his secretary and he pulls her to him. But you see her eyes drop. That is her saying, "I don't know what to feel." We're grateful that these women raised these issues and helped get this term sexual harassment coined in the late '70s at Cornell University. That awareness of, "It doesn't feel good, but it's what I'm expected to do," and "Where do I put my feelings in that situation?" The women of 9to5 making that a national discussion, what happened to that until #metoo and #timesup.

I like how you used the personal stories of these women who shared the similar experiences. Can you talk about finding the people and narratives that formed the basis of your film and the movement?

A lot of what we wanted to trace was that most of the folks in the film didn't have lefty or antiracist parents. Mary Johnson gets a leaflet to go to a meeting. Then she is asked to give a speech. And she is trained, and then attends a demonstration. Women began to feel more confident and had skills and abilities they didn't realize they had. This wasn't a labor movement, given the second-class status they had. They nurtured women, generated support, and formed a supportive community so the women brought up under sexism with zero confidence in themselves could become leaders and thinkers. That was the organization they had to create. They had the movement fit the community they were trying to represent as they gained power in a sexist time.

These women found strength in organizing and going national. What observations do you have about the way the organization grew, adapted, and changed?

9to5 never gave racism a pass. It was founded by two white women and many early members were white, but they quickly realized that they needed to build a diverse, inclusive movement, and they needed to bring white and black workers together. They asked, "What are our grievances?" and put out a Bill of Rights and saw what other women responded. There was a wave, so they formed a national network and gained power from that. They also realized they needed tactics to get in the press as public attention was important. "Shame the boss" — a typical union practice — honoring the Worst Boss of the Year, or Pettiest Office Procedure. They realized, we can maybe win a battle for a woman or a workplace, but then how do we get sustained power to form a women-led union? And they smacked up against the rise of the right and union busting.

What are your thoughts about the backlash and job risks these women faced as 9to5 gained strength? Why are men so afraid of treating women equally and with respect and decency?

It's amazing that since I came of age in the late '60s, to now, the self-image of women in Western countries has been transformed. The bedroom, the kitchen, and the workplace have been transformed. Men can do dishes or care for children. Socialization is powerful. The women's movement has had a lasting influence. I wish the civil rights had been more powerful. Act Up is an amazingly creative and powerful movement. "How to Survive a Plague" was a model for "9to5." We wanted to give young activists today who look at this film the lesson that they tried, failed, learned, and responded to their times. They were trying for social justice, just like people are trying for social justice today. We hope young people today see the film draw that broad lesson.

The movement made strides; however, steps still needed to be taken to secure equal pay, equal rights, and benefits and respect for women in the workplace, as well as combat racial and gender discrimination? As even Jane Fonda says in the film, there is still so much work to be done! Or as the 9to5 women said after a victory or a defeat: "What's next?"

In terms of strides we made and need to make as women and as workers, people need economic security and power. I'm talking about regular folks, not the elite. That part of our world has lost ground. Regular working people — teachers, restaurant workers, factory workers, etc. are losing economic security. They worry that they will lose their house, car, job, and health care. There is so much need for regular folks to have more economic power. How do we get that power? I've come to the conclusion we need to strengthen the union movement, because they speak for working-class people. Old leadership needs to get out the way for younger people so we can continue to gain a secure life and advance.

Of course, I saw it back then. I think it's a brilliant film. It's not a serious drama about working women. They decided to make it a farce, which is smart. It's a film that really had legs.

9to5: The Story Of A Movement Gender Disparity Interview Julia Reichert Sexism Movies