And employers illegally undermine union efforts in 41.5 percent of all union election campaigns, too 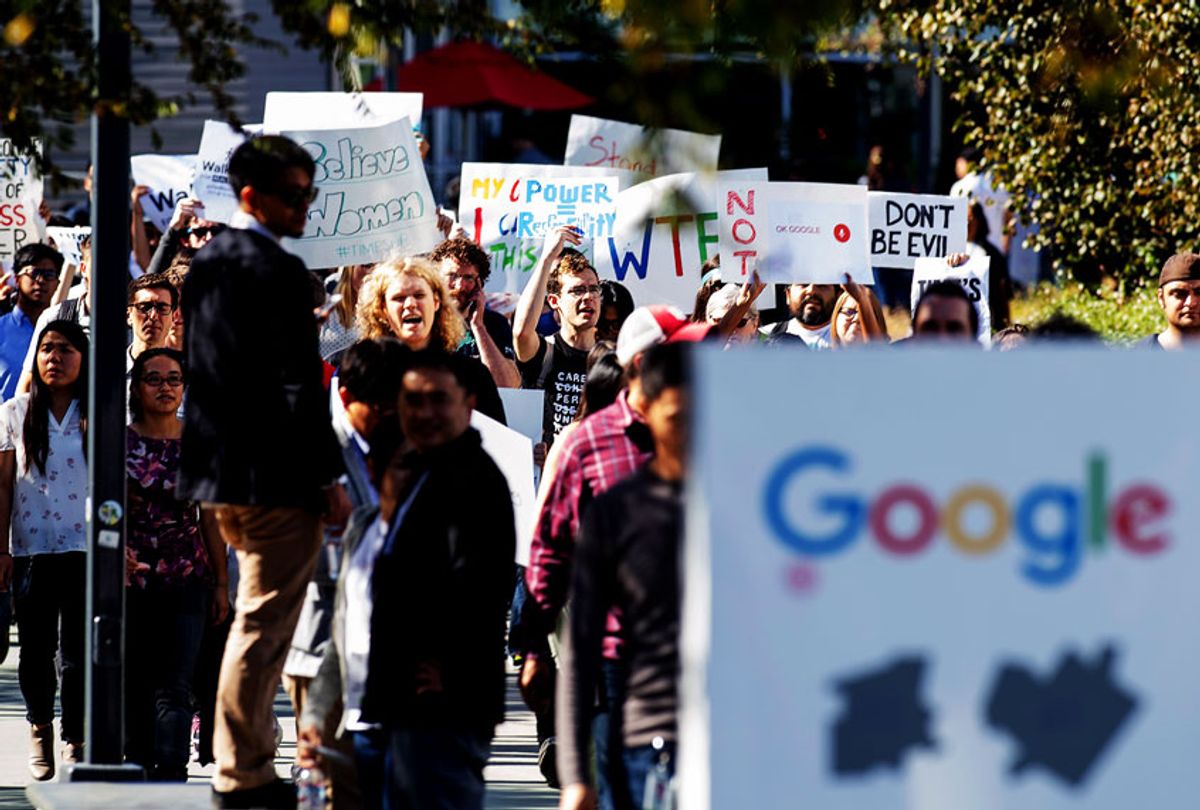 Workers protest against Google's handling of sexual misconduct allegations at the company's Mountain View, Calif., headquarters. Google is promising to be more forceful and open about its handling of sexual misconduct cases, a week after high-paid engineers and others walked out in protest over its male-dominated culture. CEO Sundar Pichai spelled out the concessions in an email sent Thursday, Nov. 8, to Google employees. (AP Photo/Noah Berger)
--

After years of decline, the American labor movement is on the upswing: Google contractors in Pittsburgh unionized this year, along with several newsrooms, while other tech companies are in the middle of union struggles. Still, unions have a lot of ground to retake, as union membership among American workers has fallen by about 50 percent over the past 35 years; membership peaked in 1954. Unions are, in general, extremely good for the economy: union workers are paid better, treated better, and retire better. So why the fall? According to new research by the Economic Policy Institute (EPI), America’s decline of unions is likely in part due to the hefty investments employers have put into thwarting unionization efforts, which is fueled by a shadow industry that even the federal government has little information about.

The EPI report, which was published on Wednesday, found that American employers spend an estimated $340 million annually on “union avoidance” consultants and firms to help them stave off union elections. Consultants often report being paid $350 per hour, or more. Some even clock in $2,500 daily rates.

"I think it is just alarming to me to see the numbers in front of your face that show how well some people are paid to make other people earn less, that to me is shocking,” Ben Zipperer, one of the authors of the report and an economist at the EPI, told Salon.

According to the report, some companies spend millions on union avoidance consultants each year. Laboratory Corporation of America spent an estimated $4.3 million between 2014 and 2018. Mission Foods spent $2.9 million between 2016 and 2017. The Trump International Hotel in Las Vegas reportedly spent $569,000 between 2015 and 2016.

“The main goal of union avoidance consulting firms is to prevent a union election from taking place—and if that fails, to ensure that workers vote against the union,” the researchers state in the paper.

Zipperer told Salon it’s unclear if this spending is at a historic high, as this kind of data has always been a bit murky and often hard to access — which has made it nearly impossible to calculate the size of this industry. The most comprehensive review of research on the anti-union industry was conducted by the U.S. Department of Labor in 2011, but Zipperer said it only captured about 7 to 8 percent of the industry.

“We used it [the data], but we had to account for the fact that the data that exists vastly underestimates the size of the industry and that goes to this other problem,” Zipperer explained. “This speaks to the fact that not only does our labor law not protect people, and not only is there this shadow industry that we have little information about, but we can’t even collect or maintain the data to really get a handle on this — and the agencies that are supposed to be enforcing and making sure that the promise of labor law is upheld don’t even have the data to use themselves.”

The report also found that American employers are charged with violating federal law in 41.5 percent of all union election campaigns. The researchers estimate that one out of five union election campaigns involves a charge in which a worker was illegally fired for union activity. The EPI researchers looked at a set of 3,620 National Labor Relations Board election filings from 2016 to 2017, and 49,396 cases of Unfair Labor Practice charges filed against employers between 2015 and 2018. Additionally, they conducted a Freedom of Information Act request to obtain and review each Unfair Labor Practice (ULP) charge as, to their surprise, the National Labor Relations Board does not systematically track which ULP charges are filed during a union election campaign.

Zipperer said federal law violations are high because there is no real penalty for companies for breaking the law. For example,  when an employer illegally fire employees for union support they are only liable for back pay of their work, but any wages the worker has earned while waiting to be reinstated are subtracted.

“There aren’t meaningful penalties associated with that, so it makes sense to pay lawyers and consultants really good money to help thwart a unionization attempt,” he said.

Researchers conclude the consequence of union suppression have contributed to extreme inequality in America, in addition to workers’ rights being attacked through legislation.

“Indeed, corporations have seen their interests advanced by policymakers, while working people’s interests have been largely neglected,” the researchers state. “Instead of advancing reforms that would rebalance an increasingly rigged system, lawmakers have repeatedly failed to prioritize measures that advance workers’ rights.”