Not that we're complaining 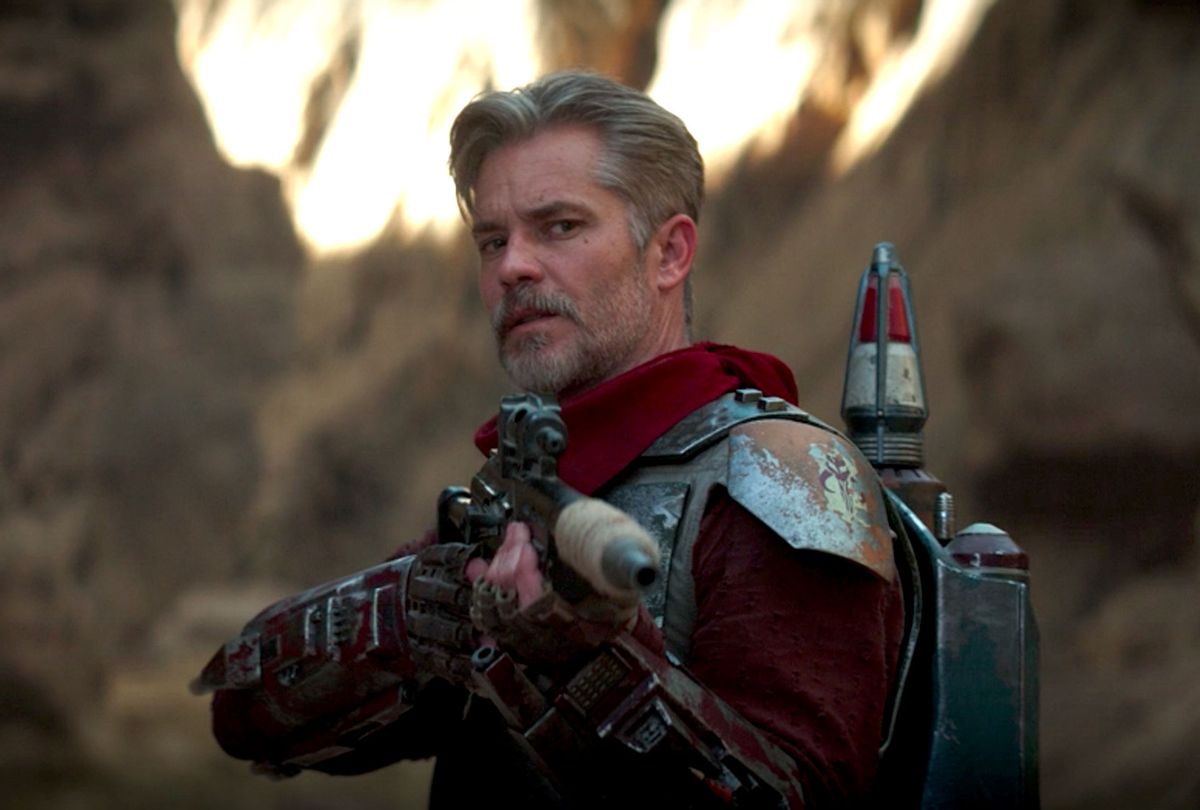 Timothy Olyphant in "The Mandalorian" (Disney+)
--

It's been five years since Raylan Givens secured his white whale and "Justified" star Timothy Olyphant hung up the modern day cowboy's iconic Stetson. Since then, the good-natured actor and exceptionally fun late-night guest has taken on a number of different roles, including two fictional versions of himself, but he's also continued to pop up as impossibly cool lawmen, much to the delight of his many fans. With memorable appearances in the fourth installment of Noah Hawley's FX anthology series "Fargo" and in the Season 2 premiere of the Disney+ series "The Mandalorian," the actor has become television's go-to cowboy-slash-marshal. At this point, casting notices for such roles should probably just read "Timothy Olyphant, no others need apply."

But how and why has Olyphant, who is equally skilled at comedy as he is at drama (check out his excellent performance on the great single-season show "The Grinder" if you haven't yet), carved out a specific niche in the television landscape as a law enforcement officer with a penchant for long-winded stories and doing the wrong thing for the right reasons? Is it his recognizable walk, which conjures up images of a swaggering cowboy from the Wild West? Is it the self-possessed way he holds himself that asserts authority and commands the attention of everyone in the room? Maybe it's the way he wields his characters' righteous anger and quick wit, sharpening them into weapons that have proven, at times, to be more dangerous than any gun. Or perhaps it's simply his undeniable ability to wear a hat and look cool leaning against a door jamb.

It's likely all of those things, which when combined with Olyphant's natural on-screen presence and cool indifference add up to a portrait of a sexy gunslinger with an ineffable, in-between quality. There is little doubt these men are the good guys, but with their sharp tongue and flawed moral centers, they could have just as easily been criminals and outlaws if the circumstances were slightly different. It's this very idea that powered "Justified"'s central conflict for six fantastic seasons, during which time a running theme was Raylan's frequent bending of the law, as he argues his actions and methods are justified (heh) because he's taking down criminals who've pulled their guns on him first. The results speak for themselves, sure, but they also come with more bullet holes than the marshal's office can often explain.

But just as this trend of cocky gunslingers didn't end with "Justified," it didn't begin there either. Prior to picking up Raylan's badge and gun and trading barbs with Walton Goggins' charismatic Boyd Crowder, Olyphant portrayed Seth Bullock, the reluctant sheriff of Deadwood on the HBO drama of the same name that ran from 2004 to 2006. He returned to the role last year for the long-awaited follow-up film, even growing his own massive mustache for the occasion. Like Raylan, Bullock vibrates with a barely concealed rage but is guided by a sense of duty if not always morality. And like Raylan, he finds common ground with his main foe, the foul-mouthed, multidimensional saloon owner Al Swearengen (Ian McShane).

"Fargo"'s Dick "Deafy" Wickware, on the other hand, is more of a straight-shooter than both Raylan and even Bullock. Arriving in 1950s Kansas City chasing two escaped convicts, he quickly finds himself tangled in a complicated web of criminal activity that extends to include the local police. But even as he appears to mostly play by the rules, he is no less self-righteous than the other lawmen Olyphant has played. As a devout member of the Mormon church, his sense of duty is driven by his faith as much as it is a natural desire for justice. Still, he is often smarter than most people expect, with a similar ability to suss out bulls*** that allows him to read people. He uses all of this to his advantage within the on-screen narrative, and it has the added bonus of making Olyphant stand out in a sprawling cast.

Cobb Vanth, the lawman Olyphant plays on "The Mandalorian," similarly stands out, but it has less to do with the character than it does Olyphant himself. It's the type of casting that is meant to put the actor front and center, as Cobb is far from showy and this is likely his only appearance on the show. Cobb is a lone marshal attempting to bring law and order to a tiny town overrun by outsiders and terrorized by a krayt dragon. The differences between this role and the others Olyphant plays stem largely from the nature of the show, which is a space Western set in the extended Star Wars universe, but also, hilariously, the relationship the character has with his "hat." While the other lawmen Olyphant plays are rarely seen without one, Cobb immediately removes his helmet after slinking his way into the local cantina, and he rarely puts it on for the rest of the episode. This speaks to the fact his character is not a Mandalorian, as they rarely are ever seen without their helmet, but it also serves as a subtle nod to Olyphant's filmography (including a brief appearance as James Stacy, star of "Lancer," in "Once Upon a Time... in Hollywood").

However, in the end this isn't about what Cobb is not so much as what he is, and that's another quick-drawing gunslinger with a short temper and an impressive ability to deliver a quip. This is not your typical typecasting, though — spend 10 minutes watching Olyphant in these roles and you get the sense this is another one of his bits, that he finds it hilarious that yet another person has asked him to don a hat and strap on a badge and gun. And he's only gotten better at it as time has gone on (and since he's gone more salt-and-pepper up top). But if there's a snag in the otherwise enjoyable gag, it's that Olyphant's habit of playing lawmen, many of whom regularly push the boundaries of the law, becomes a little less amusing when viewed through the lens of the events of 2020 and the worldwide protests against systemic racism and police brutality.

Characters like Bullock, Givens, and even Wickware, who threatens a Black teenager to get her to give up the location of a family member, become harder to accept even with the excuse of existing in a heightened version of reality. The in-between quality all these men possess, the very thing that draws viewers to them, ultimately threatens to become a detriment rather than an asset, and we must contend with the fact that the thing we love to watch on TV is the very problem we're trying to solve in the broken outside world. When viewed in a vacuum, though — if that's possible, and I realize it might not be — it's easily one of TV's best running gags.