"Deadwood: The Movie" is a send-off worth the long wait 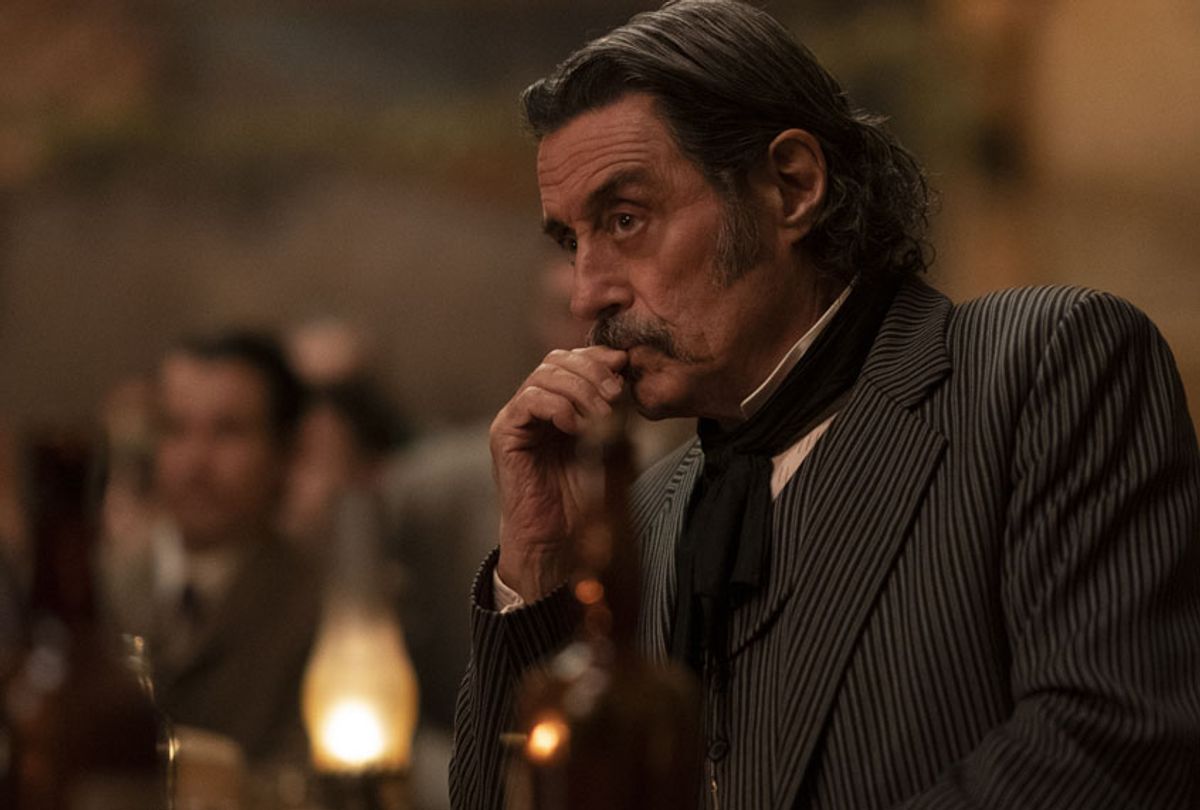 As both an experiment and a matter of practicality, I watched “Deadwood: The Movie” cold and straight, without having re-watched any of the three seasons’ worth of episodes leading up to it. This may lead you to wonder: However can you trust that my opinion has the merit of a holey bucket’s worth of horse spit? (To which I must answer that for some of you fine folks, it never does!)

Like just about everyone else in the free world, I’ve got a lot on my plate, all of which involves hours upon hours of many, many TV series. In addition, I've been working on the Split Screens Festival which, among other things — shameless promotion alert! — invites New York City dwellers with time on their hands this Friday night to see “Deadwood” live and in-person with a bunch of other miscreants, including one of the film's stars. (Or if that’s not your speed, you can come nestle in for a chat between yours truly and “Better Things” star and creator Pamela Adlon that same night.)

Regardless of this, some of you hoopleheads may answer, “I work two jobs, and I still made time for all 36 classic episodes of one of the best damn series to grace our television,” and to you I say, great! Be assured you will love “Deadwood: The Movie” finally seeing the light of prime time on Friday at 8 p.m. on HBO, because you are predisposed to love it, and because it is truly worthy of your love and admiration.

But if you haven't set aside the time for a refresher viewing of “Deadwood,” you’re probably heading into this final chapter as I did, relying on shadows of memory to remind you of where the story dropped off a cliff some 13 years ago.

Happily the movie provides ample succor for that viewer too. And if any doubts of that flit forth within the opening segments of the movie, which play out equally as a celebratory revival and to jog the memory, they dissipate entirely the moment resident lawman Seth Bullock (Timothy Olyphant), full of fire, sits down across the table from everyone's favorite incorrigible saloon owner Al Swearengen (Ian McShane).

In truth they'll likely vanish before that, during an early scene showing the town’s famed prostitute Trixie (Paula Malcomson) stepping onto her balcony and raining down profanities and curses upon a parade passing below. The scene is reminiscent of “Romeo and Juliet,” only this is “Deadwood,” so her words come from the polar opposite of ardent love, and instead of floating on a cloud of virginal idealism ("Do not swear at all/ Or, if thou wilt, swear by thy gracious self...") the consort’s words spray her quarry like buckshot: "You bald pated c**t!"

The problem at hand: mining magnate George Hearst (Gerald McRaney) has returned to town to take part in South Dakota’s statehood celebration. Only in 1889, Hearst is a junior Senator from California, "who since our paths last crossed," Swearengen theatrically declares for the edification of his establishment's patrons, "has went from strength to stronger strength still."

“Deadwood: The Movie,” directed by series veteran Daniel Minahan, is in many respects a reflection of its creator’s stage of life. Recently my colleague Matt Zoller Seitz published a Vulture story about his set visit to Melody Ranch, the production’s famous home, in which David Milch speaks plainly about his Alzheimer’s diagnosis. Terminal conditions have a way of clarifying what’s important in life, and one can see that playing out in this statehood-era glimpse of the town.

Time has polished away some of the filth and disorderliness of the old “camp,” along with improving the lot of several Deadwood notables and calming the flames of others.

Some folks, predictably, are more or less the same as they ever were. Bullock’s partner Sol Starr (John Hawkes) remains true and solid to a fault, and honestly, nobody expects Calamity Jane (Robin Weigert) to suddenly turn up sober and clean faced. Her untamable nature and adherence to lawlessness is as integral to the drama’s spirit as Swearengen’s Shakespearean turns of phrase.

Yes, time and propriety have not changed this drama’s affection for four-letter words, nor Milch’s skillfully weaving of obscenities into elaborate tapestries that inspired one of Salon’s previous TV critics to style entire columns in “Deadwood”-speak.

To quell either the dialogue’s temperament or its deliverers’ natures would be akin to the show chopping off a finger. But while central personas haven’t changed, their objectives may have shifted over the years.

No recent viewings of the series are required to ignite one’s appreciation for this drama’s power source.  “Deadwood: The Movie “ may be a rumination on change and evolution but love, lust, tragedy, violence and loyalty still curl together in the same way they always have, five fingers joining in a determined and stubborn fist.

“Deadwood” is a show that never really went away, even though its creator David Milch and HBO walked off from the old Western town in 2006, drawn to other percolating passions such as “John From Cincinnati,” which lasted for all of one season, and the horsetrack drama “Luck,” another effort felled by controversies involving the deaths of several horses.

“Deadwood” ended after three seasons, for reasons having little to do with the product’s quality. True, its ratings had declined, but the coup de grâce came from the business side of things. Milch became known for blowing production schedules, a trait that did not work in the show’s favor when HBO and the series' international rights-holder Paramount stood at an impasse over financial concerns.

Even so, the drama’s status of one of best series of all time was never in dispute. Many have rightly theorized that “Deadwood” premiered a decade too early in the Golden Age of Dramas timeline; had it debuted in 2014, lower viewership numbers would not have mattered as much as they did in 2006. Knowing what we now know about its creator’s health, however, we might never have gotten the three incredible seasons that we did.

For all those years “Deadwood” floated in that rare limbo for a TV series that hasn’t been specifically announced as dead-for-a-ducat-dead, a place that leaves fans in the agonizing and pleasurable space of hope. Reporters and supporters of the series kept asking HBO about whether “Deadwood” would ever receive a proper send-off, and for a time the channel floated the possibility of wrapping up the story in the space of two two-hour films.

Shortly after “Deadwood” closed up shop Olyphant went on to topline six thrilling seasons of FX’s “Justified” as Marshal Raylan Givens, an Elmore Leonard character. Al Swearengen granted Ian McShane greater notoriety than he already possessed and noteworthy billing in a number of blockbuster film franchises, the latest being the “John Wick” series. He’s also the biggest name in Starz’s “American Gods” at the moment.

Anna Gunn, of course, went on to co-star in “Breaking Bad.” For a time Kim Dickens led the cast of “Fear the Walking Dead.” There's Weigert and Garret Dillahunt, too . . . . read the main cast list for this series and marvel at its role as a staging area for the futures of many tremendous actors. Their individual successes also made pulling the original cast together for even a two-hour film an effort long thought to be impossible.

I run though this brief history simply as a reminder that it took a very, very long time to get to where we are at this moment: days away from the “Deadwood” movie’s HBO premiere.  It’s worth taking a beat or two to appreciate the fact that the producers overcame all of that, and even more astounding that Milch wrote every word under the shadow of an Alzheimer’s diagnosis.

The result is a one-hour and 50-minute work that feels constructed with care and satisfying to its very bones, a full circle completion unlike most. The aforementioned cast members have returned for the finale, as do Molly Parker, Keone Young, Brad Dourif, William Sanderson and W. Earl Brown and Franklyn Ajaye, to name a few.

We’re in the midst of finale season, one focused mainly on the "Game of Thrones" finale, parsing its many failings as well as the ways in which it succeeded. This arduous enterprise played out over weeks, prompting contemplation of what is required to create a successful finale, perhaps accepting that a perfect ending is unattainable.

Technically I suppose “Deadwood: The Movie” may not qualify as a finale so much as a long-delayed resolution to a number of outstanding disputes and settling of rivalries, namely the one between Hearst and Swearengen which, among other things, culminated in one character’s murder to secure the salvation of another. That’s the sort of ending that demands adequate closure and the movie provides it in stunning fashion.

Given the amount of time that has passed, I hesitate to reveal much more in order to maintain the shock of what transpires, beyond saying that “Deadwood: The Movie” attains the rare designation of serving as a proper end, and providing the right kind of ending.

Two of its characters’ final lines rate among some of the most definitively poetic summaries of who they are and the level of brilliance this show has achieved, and one of those utterances might well earn the status of the last word among last words.

“Deadwood: The Movie” does precisely what everyone who has waited all these long years for it hopes it would do, capturing nearly all of its magnificence by way of a grand send-off.  You don't have to have watched old episodes recently to appreciate how well the movie fulfills its long-awaited purpose.  But afterward, you may itch to experience the entire story from the start.