Warwick Davis is the real hero of Gen X

An action hero with a baby in every scene, Davis taught the loneliest generation how to parent ourselves 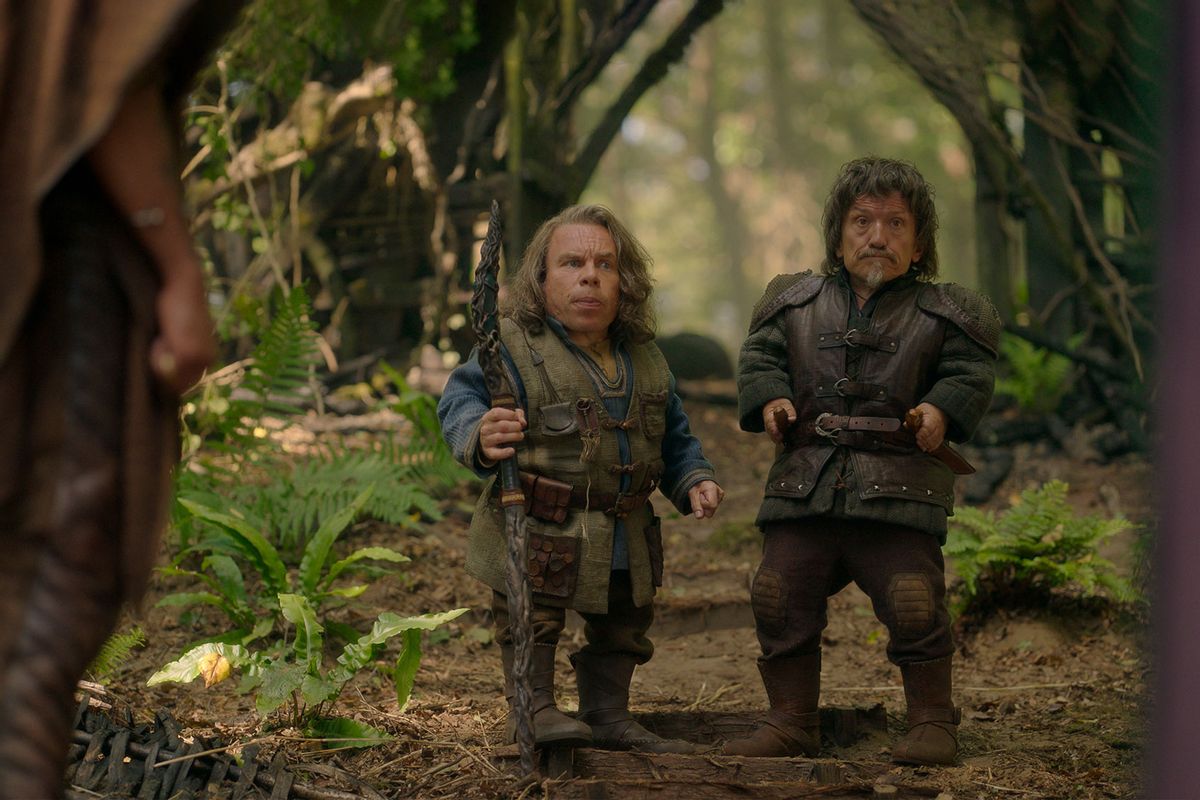 An occupational hazard of working the culture desk? Rewatching beloved classics from childhood as an adult and finding them disappointing and problematic, often laced with homophobia and racism, the bad sex jokes that we somehow served up to children in the '70s, '80s and '90s like school lunch. (Hello "Hocus Pocus.") I'm happy to tell you, though, "Willow" does not disappoint.

The Ron Howard-directed 1988 fantasy film remains solid upon rewatching, just as funny, fast-paced and surprisingly exciting as I remembered. Its competency is likely helped along by the trio of main performers (along with some of the finest infant acting to ever grace a screen): Val Kilmer as rascal mercenary Madmartigan, Joanne Whalley as fiery princess warrior Sorsha and Warwick Davis as the title character.

"Willow" has been given the streaming sequel treatment, with a new series airing on Disney+. Most people seem to love it, as they should. The new series continues the threads of the original, picking up with the main characters a few years after the events of the film. But importantly, the series centers young women, another through line from a movie where a baby girl was prophesied to bring about the downfall of an evil regime.

Also? Davis is back as Willow, the hero who never left our hearts, the humble farmer who led a quest and the actor who leads a generation still. Yes, even our cranky, disaffected group, Davis affected us. It's a testament to his power as a performer that he can enchant — still — perhaps the most disenchanted generation of all: Gen X.

The "Willow" legend continues, only now the quest is open to all who would take it, including girls

English actor Davis was only 11 years old when his grandmother heard a radio call for people under four feet tall to be in the film "Return of the Jedi." A child of the '70s, Davis was a huge "Star Wars" fan already and the child actor was cast as an extra in the film, as one of the Ewoks, a species of small creatures who live on the forest moon Endor. But when the actor playing the main Ewok fell ill, George Lucas handpicked Davis to be the character Wicket.

I didn't pick up a Laurie Strode action figure (though I looked at one longingly in the glass case at my favorite comic book store) before interviewing Jamie Lee Curtis. So this may mark the first official time I've written about a performer whose doll I had. Not only had but loved, hugged so much his forest hoodie was lost. My sister and I used to fight over our Wicket doll. He was beloved because the character was beloved.

He had to learn how to act outside of a mask. Perhaps there is no better metaphor for growing up and becoming your truest self.

Davis as Wicket is funny, sharp and considered. It can't be easy to act when your entire face is disguised, your body hidden by a fuzzy suit, but Davis made Wicket more than a gag (the character was voiced by multiple actors), revealing a gift for physical comedy and underscoring the ability of often small movements to speak volumes. Davis said he based his performance on his dog, relating in a Reddit chat that his pet "used to tilt his head from side to side when he heard a strange sound. I felt this would work quite well for the character." In Wicket's first appearance, he pokes a sleeping Leia (Carrie Fisher) with a spear, then later shares her food.

Davis appeared in the goblin corps in "Labyrinth," that most seminal of Gen X films, which gave an entire generation nightmares about babysitting or at least shifted our dating preferences toward the decidedly goblin kingly, but the young actor's onscreen experience was limited. He described himself as "not seen" in "Return of the Jedi," due to his costume.

Dove (Ellie Bamber) and Willow Ufgood (Warwick Davis) in "Willow" (Disney/Lucasfilm Ltd.)Lucas made a "leap of faith by writing the story for me," Davis said. He was only 17 years old at the time. Lucas first told Davis' mom about the role. To be Willow, Davis "had to develop acting outside of a costume," he told Sky News. He had to learn how to act outside of a mask. Perhaps there is no better metaphor for growing up and becoming your truest self.

A family man yearning for more is not new territory, but Davis treads it like it's the moon.

In "Willow," Davis' character is a young farmer, married, with two young children. The family leads a simple, rural life in a stream-side village with fellow Nelwyn, hobbit-like characters. But Willow dreams of more. He's tried for years to be chosen as the apprentice for the town's sorcerer, the High Aldwin (the fantastic Billy Barty, making a memorably loving appearance, as always). This year, once again, Willow doesn't make the cut. A family man yearning for more is not new territory, but Davis treads it like it's the moon.

His Willow is devoted to his wife (Julie Peters), children and children in general. When a prophesied baby literally floats up to his shore, Moses-style, he assumes the burden of delivering her to safety. Can you be an action hero while carrying a baby in every scene? Davis can. In doing so, he showed us a new way to parent, an avenue to care for ourselves and our children in a way we hadn't been parented.

Steadfast, loving, Davis' Willow is a nontoxic man before we realized there was such a thing, or that we needed it, an ally to all (except trolls). Madmartigan is supposed to be the love interest here, and he is – Kilmer's undeniable chemistry and comedic gifts both radiating from the screen like heat-seeking missiles – but Willow has the love of the world. He's not flashy, not shirtless or in drag like Kilmer. Willow is subtly powerful. While Madmartigan and Sorsha are swashbuckling or kissing or kissing/swashbuckling, Willow is in the corner, keeping everybody alive. That's Gen X for you, in the corner too and forever and always overlooked (Gen what?).

Willow Ufgood (Warwick Davis) and Mims (Annabelle Davis) in "Willow" (Disney/Lucasfilm Ltd.)He doesn't need your help to get on a horse. But Willow also knows enough to call for assistance when it's warranted. For example: trolls are on the bridge, which is also on fire, and there's a two-headed moat monster. He's not too proud to bring in the big, hired guns (Madmartigan).

The thing about being overlooked is that they never see you coming. Willow saves the day and he does it without magic. With simple sleight of hand. With smarts and with patient clarity. How is Willow Gen X? He does his own thing. He's always been doing it. It makes complete sense that the Disney+ "Willow" series would find the character back in his village, living his life whether or not you know how extraordinary it has turned out to be.

We think of Gen X as the blasé generation, the bitter and cynical one. The world hasn't been wonderful for a while, for a lot of people, if we're being honest. Wanting to turn away from it, even if only in sarcastic dismissal, is a natural response, a defensive one of self-preservation. But I think my generation has never turned away without looking over our shoulders, hoping someone might look back at us, wait for us, give us something to hope for and hope along with us.

Davis is that Gen X-er who made it, and a made a path lined with the most loving of stories, fiction full of heart and hope. That a "Star Wars" fan could be in "Star Wars." That a farmer could save the world. Do we still believe in magic? If Davis is there, then yes.