"Val" captures the bittersweet paradox of Kilmer's life and art, both hamstrung by his own intensity 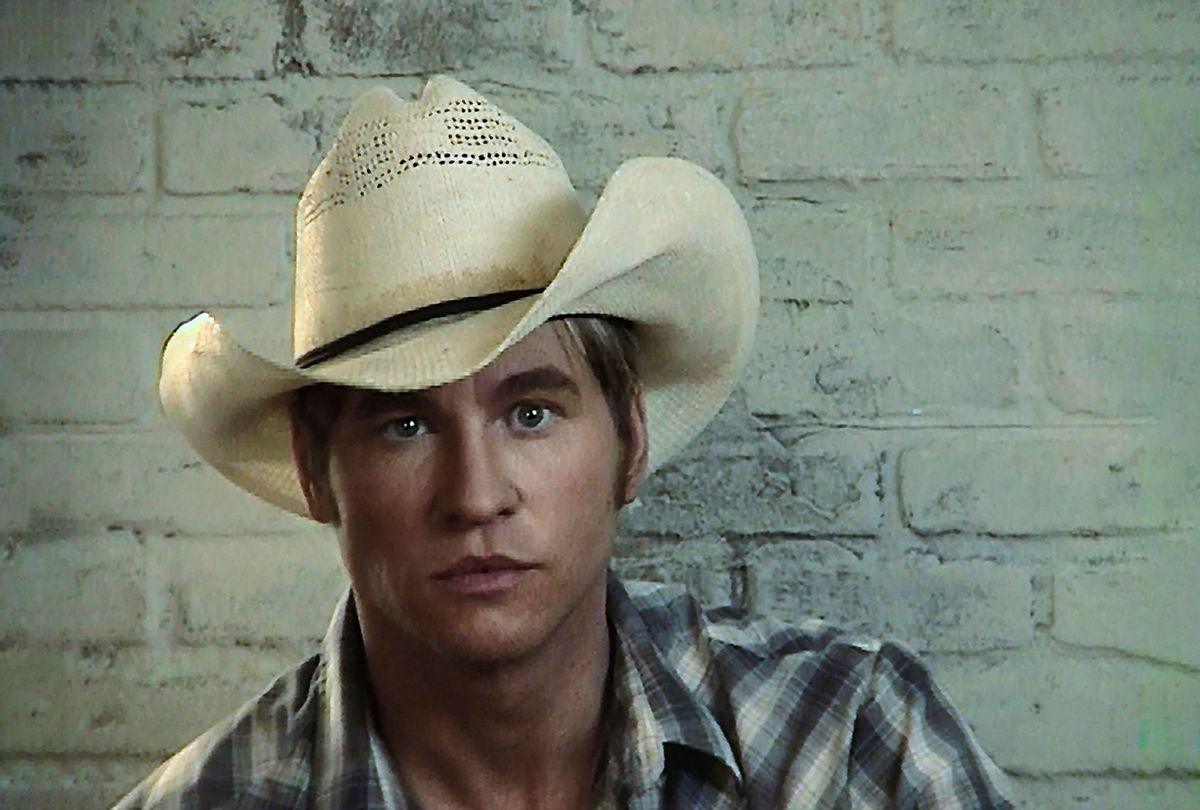 Val Kilmer creates his own paradoxes. He was an intense, promising young actor who wanted to play Hamlet and worshipped Marlon Brando (what young male actor doesn't?), but his early film roles are in the goofball comedies, "Top Secret," and "Real Genius." He is a perfectionist but often frustrated by directors on set, and therefore, frequently called "difficult." (If one alleged rumor about Kilmer is to be believed, he was so hated during the shooting of "The Saint" that some of the Russian crew approached director Phillip Noyce with an offer to hire a hitman. Apparently, Noyce considered it before politely declining, explaining that he might need Kilmer for reshoots — which proved to be the case).

With the Amazon documentary "Val," Kilmer acknowledges another paradox. Midway through this film, he muses about "selling his old self and career" which is often a low point for many performers. But, he concedes, doing this now, at this stage in his career is an experience more gratifying than humiliating.

"Val" takes a bittersweet stroll down memory lane as directors Ting Poo and Leo Scott nimbly trace Kilmer's life and career from inception to the present in 108 minutes. Kilmer talks about his hits and missed opportunities, his triumphs and tribulations off screen, and makes poignant observations about the decision points he faced in what he calls his "magical life." The film joins the growing list of documentaries by and about actors who documented their lives and careers as they were happening. (See "Love, Antosha" and Soleil Moon-Frye's "Kid 90" as recent examples). But while there is much to appreciate in evaluating Kilmer's life and career here, the film feels more like clips assembled from an extended DVD commentary.

"Val" opens with images of collaging, and the filmmakers assemble their own collage with this film. They have Jack Kilmer, Val's son, effectively read the narration because Val's voice has been compromised following a bout with throat cancer. (Kilmer speaks using a voice box). They knit together not just Kilmer's copious video footage, but his audition tapes (for roles in film by Kubrick and Scorsese that he never got), behind-the-scenes moments (Sean Penn and Kevin Bacon moon Kilmer), home movies (of his family, including his late brother and their early filmmaking efforts), along with interviews. Scenes filmed in the present day have Kilmer revisiting his old haunts, Julliard and London, or attending a screening of "Tombstone" in Texas. Viewers will wax nostalgic as Kilmer is seen at the "Top Gun" premiere with his date Cher, or empathize with him as he falls ill during a Comic-Con signing.

Kilmer wants this documentary to tell a story about truth and illusion, and while he is often candid, his bias colors the reality. Cases in point: Hired for the lead role in the off-Broadway play "Slab Boys," Kilmer gets demoted twice(!) when Bacon and then Penn are cast. He fulfills a contract to play Iceman in "Top Gun" and complains about the thin script, recounting the backstory he creates to flesh out his arrogant character. He accepts the "dream job" of "Batman," but finds himself unable to perform in the rubberized suit and declines playing the role again, choosing to make "The Saint," where he can create 10 characters in one film.

These revelations have moments of insight about the life and work of an actor. However, there are only a few useful nuggets — as when Kilmer describes wanting to lie on a bed of ice for his deathbed scene in "Tombstone" so he can feel the discomfort his character, Doc Holliday, must have been experiencing. Less impactful is Kilmer describing the year he spent wearing leather pants and learning how to move like Jim Morrison in preparation for "The Doors." His commitment to his craft as a method actor is never questioned, but "Val" lets viewers connect the dots about what all his efforts accomplished, and some may not be bothered.

"Val" often glosses over things that are of potential interest. When Kilmer finally gets to work with Brando on the "doomed" production of "The Island of Dr. Moreau," there is one limited exchange with the legendary actor. (Reportedly, they did not get along, which begs for a meet-your-idols response). At least a fight Kilmer has with director John Frankenheimer, and his chats with his beleaguered costar David Thewlis are interesting.

Kilmer acknowledges that for an actor, once you agree to the role, you have to forget your life for a period of time. This is hardly a groundbreaking pronouncement, but it feeds into his commitment to play Mark Twain in a one-man show he wrote called "Citizen Twain." Alas, his health fails which derails his future plans for the show.

The moral of "Val," may be that Kilmer is his own worst enemy, an idea that gives the film its diffused power. It is not unlike Kilmer's commitment to Christian Science — his faith is what he claims gets him through, but his self-esteem still keeps taking repeated beatings. "Val" certainly engenders sympathy, but at times it feels like crocodile tears.

A sad story from Kilmer's personal life supports this assumption. When his father, a real estate developer, has Val cosign papers for a deal — and puts his son's name on a number of shell companies without permission — Kilmer is forced to either sue or write a check. It is another paradox for the actor. What he does explains much about his character. If only "Val" was always so eye-opening.

"Val" is available to stream on Aug. 6 on Amazon Prime.