The power of Kirsten Dunst and Jesse Plemons

Is the real-life couple, both nominated for their first Oscars, next in line for Hollywood royalty? 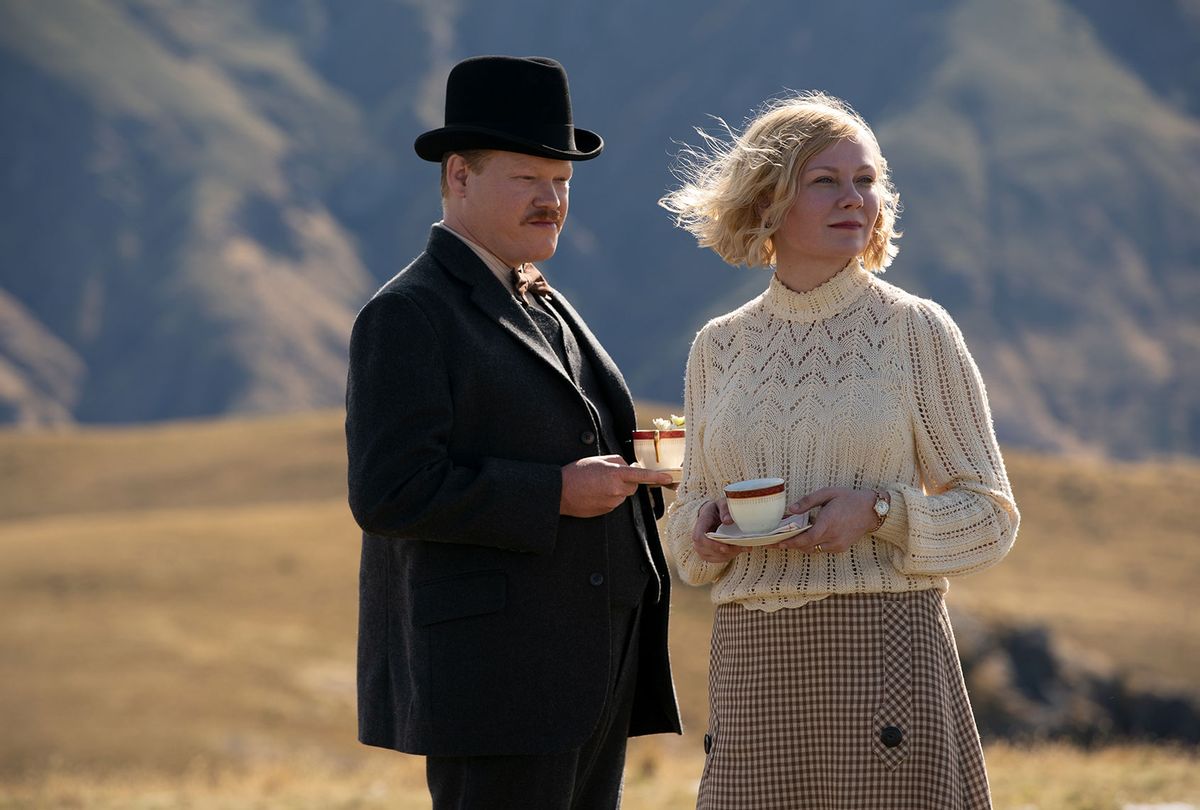 The Power of the Dog (Photo courtesy of Netflix )
--

In "Hamilton," when the characters of Alexander Hamilton and his wife Eliza kiss, my child, attending his first Broadway musical performed by the nationally touring "And Peggy" cast, leaned over to me and whispered: "Wouldn't it be great if they were actually together?"

Let me introduce you to Kirsten Dunst and Jesse Plemons, kid. Actually together, Dunst and Plemons met on the set of FX's stellar second season of "Fargo," where they played high school sweethearts. Engaged since 2017, the pair have two children together along with hundreds of films, TV shows, commercials: two bodies of work from a pair of performers who have been professionally working since they could talk. This year, Dunst and Plemons join a small but notable group: couples who have both been nominated for Oscars in the same year.

Related: Benedict Cumberbatch is intimidating in Jane Campion's exquisite and potent "Power of the Dog"

Dunst and Plemons are not the only Oscar nominated couple this year. Penelope Cruz and Javier Bardem are also up for the awards at the same time, Cruz for her work in "Parallel Mothers," Bardem for playing the role of Desi Arnaz in "Being the Ricardos."

It's best actress that Cruz is up for, and Bardem will be competing for best actor. Similarly, both Dunst and Plemons are vying for supporting acting Oscars. It's like the most intense, glamorous prom court ever.

Historically, other Oscar nominated couples include Vivien Leigh (who won) and her husband-to-be Laurence Olivier (who did not win), Elizabeth Taylor (won) and Richard Burton (lost), Jack Nicholson (lost) and Angelica Huston (won), and Paul Newman and Joanne Woodward, neither of whom won the year they were nominated together.

It's a potent lineage and one that skews heavily toward classic, old Hollywood with all the baggage that entails. Many of the nominated couples over time include a best actress or supporting actress nod combined with a best director or producer nomination.

The last couple nominated for performing in the same film together was Heath Ledger and Michelle Williams for "Brokeback Mountain," which shares some commonalities with "Power of the Dog," the movie that has garnered both Dunst and Plemons their first Oscar nods.

Both films are centered on the American west, and the west of the past, though the Jane Campion-directed "Power of the Dog" is set earlier, in 1925's Montana. Both were adapted from fiction. And both movies deal with the consequences of being forced to hide one's sexuality. Plemons plays the rancher brother of a cruel and terribly repressed man (Benedict Cumberbatch). While Cumberbatch dominates the film, as his character, Phil, can suck the air out of the room, Plemons' George is a quiet portrait of hope in the face of great pain.

He's insulted by his brother near-constantly, teased for wanting love — and yet embodies a healthy masculinity Phil is missing. George cries out of joy when the woman he loves teaches him to dance, and he rolls up his sleeves and helps her with dinner service without being asked.

Dunst plays George's recent wife, Rose, a "suicide widow" as Phil calls her, who has been managing an inn and raising her creative and introspective son Peter (Kodi Smit-McPhee) alone. Plemons plays anxiety expertly, awkwardly patting Rose on the back when they have only just met and he walks in on her crying. He keeps making blunders, like insisting his nervous wife play the piano for important company, because he truly does believe in her.

Next to George's gawky optimism, Dunst's Rose silently suffers, completely lost and isolated in the world her new husband has brought her into, which includes the hostile and abusive Phil. She drinks to deal with it. When she meets the governor and his wife, Rose doesn't even try — to make conversation, to smile. Dunst's whole body sags with defeat.

The actors don't seem like a long-term couple on screen, and they are quite a pair in the film: the hope in George's eyes, the crestfallen absence of hope in Rose's.

In real life, Dunst and Plemons started a friendship on the set on "Fargo," which later blossomed into a relationship (the opposite of George and Rose's quick courtship). Both former child actors, Dunst had her movie breakthrough at 11 years old, stealing the show from heavy-hitting movie stars Tom Cruise and Brad Pitt in "Interview with the Vampire," but she had been a child model in TV commercials since the age of 3. Plemons started acting at 2 years old, in a Coke commercial.

Perhaps like the best artistic couples, Dunst and Plemons perform wonderfully together (Dunst called Plemons her "favorite actor to work with" in a Hollywood Reporter interview) but also are great alone. I've been a fan of Plemons since his Crucifictorious days, when he appeared as Landry, the best friend of the quarterback in the acclaimed NBC football series "Friday Night Lights." Landry, nerd that he is, ends up "getting" the popular girl because he's steadfast, devoted and there for her when she really needs him.

There's an earnestness in Plemons' eyes. Whether he's the smart, polite high school kid who has a death metal band, or an exterminator turned meth cook in "Breaking Bad" — you believe him.

But Plemons has played a lot of best friends over the years, a lot of sidekicks and sheriffs. His upcoming Martin Scorsese-directed "Killers of the Flower Moon" marks a star turn, as he takes on the leading man role originally written for Leonardo DiCaprio.

Dunst has played many leading parts, including Mary Jane in "Spider-Man" and the titular character of Sofia Coppola's "Marie Antionette." She brings vulnerability, energy and earnestness, like Plemons, to all her roles, even to that of the doomed (and unsympathetic) queen.

But some of her roles, though starring, have felt like the talented actor making the best of a shallow part. Skimming the surface, she contains depths as a performer the role as-written doesn't allow her to touch: the manic pixie dream girl of "Elizabethtown," the "requisite love interest" of "How to Lose Friends and Alienate People" (the New York Times described her in their review of that film as "poor Kirsten Dunst").

As Guy Lodge wrote in a Variety review of her 2017 film Woodshock: "Dunst has form in playing irretrievably inverted depression to riveting effect, but the Mulleavys' script hardly gives her as complex an emotional or intellectual palette to work with." To be better than your material is a particular kind of loneliness.

Dunst has been overlooked even when bringing to life roles of more heft, as in "Melancholia." She won the Best Actress prize at Cannes for that but received no Oscar nomination. Not until this year, her 36th year of working.

She received a Golden Globe nomination in 1995 for "Interview with the Vampire," back when she was a child, and did not receive her second Globe nomination until "Fargo" in 2016. (It seems that perhaps TV knows what to do with her; her Showtime series "On Becoming a God in Central Florida," was masterful.) Plemons was also nominated for his first Primetime Emmy for "Fargo," and won a Critics' Choice Television Award. He received his second Emmy nomination for playing a believable William Shatner "playboy starship captain"-type composite for a Star Trek-inspired episode of "Black Mirror."

As Dunst said in a 2019 interview, she feels many of her films, like "Drop Dead Gorgeous," have been panned upon release, but then praised later. Later is too late for awards like the Oscars.

It is time for Dunst and Plemons. A power couple who seem sweet, who don't suck, and who have quietly worked, really really hard, alone and together, their entire lives.