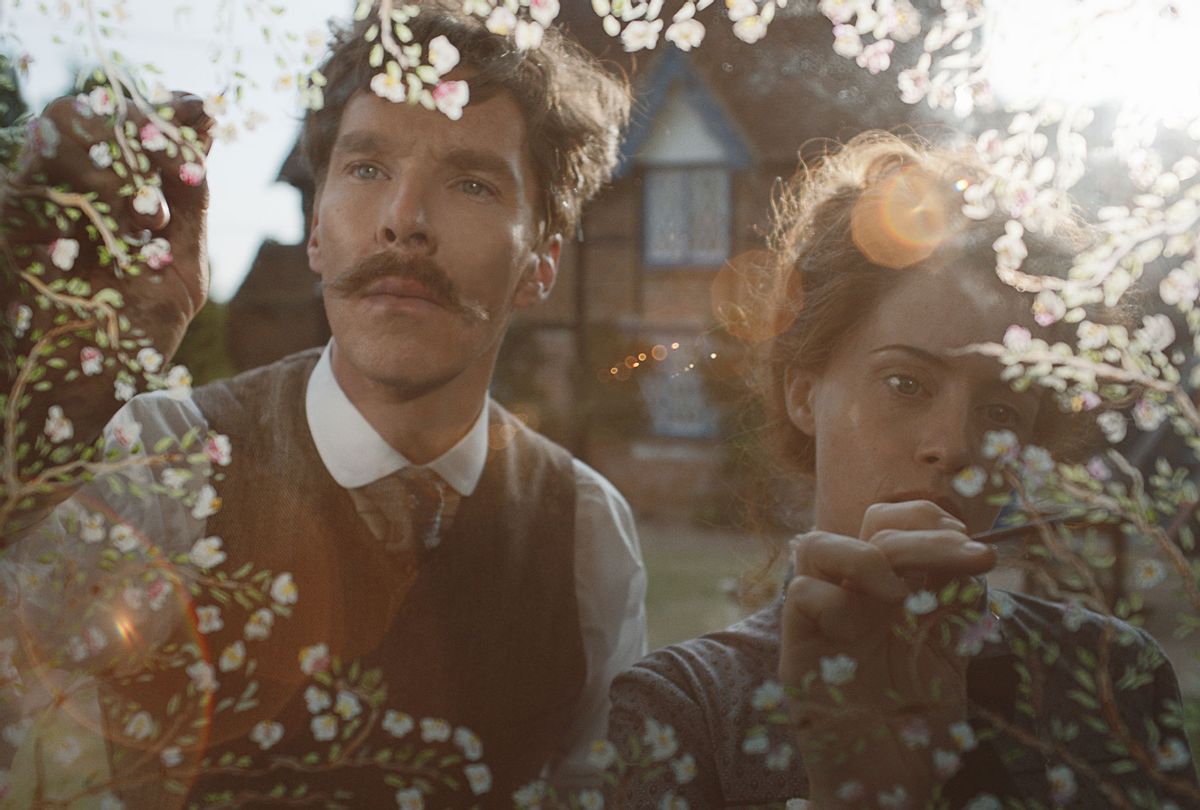 Louis Wain, cat painter, illustrator, amateur inventor, hobbyist, and would-be musician, was an unusual man. He was as unkempt as his hair, talked a mile a minute, and moved kinetically through life. (He swims spasmodically, and plays a piano with his feet, proving this point). Wain was obsessed with harnessing electricity for practical use, and later believed cats could conduct it. His life story gets an unconventional retelling in the peculiar biopic, "The Electrical Life of Louis Wain," co-written and directed by Will Sharpe.

The drama, cheekily narrated by Olivia Colman, concentrates on Wain's (Benedict Cumberbatch) life from the 1880s through the early 1920s. She explains that Wain was in charge of his five sisters and his mother after the death of his father. However, he's not very responsible — that duty falls to his formidable sister, Caroline (Andrea Riseborough), who runs the chaotic Wain household with an iron fist. Alas, Louis is not interested in work, given that he prefers to make drawings, pen operas, and dabble in boxing, all to Caroline's chagrin.

When Louis is offered a job illustrating for a newspaper edited by Sir William Ingram (Toby Jones), he initially turns it down. But when he realizes his work will help pay for his sister's governess, Emily (Claire Foy), he changes his mind. At their first family dinner together, Louis and Emily make eyes at each other, signaling that they are, pardon the pun, smitten kittens. Of course, proper society looks down on gentlemen consorting with the lower classes, but neither Louis nor Emily seem to care. (Caroline, of course, is concerned not only about the family's finances, but also its reputation).

RELATED: Pay her, she's the queen: The gender pay gap on "The Crown" is a disgrace

"The Electrical Life of Louis Wain" spends much of its first half on the courtship between Louis and Emily. Their romance is more awkward than whirlwind as he fears she will dislike him because of his severe harelip and recurring nightmares. (Both are brought vividly to life). Emily, however, is more than pleased to spend time with Louis, and a trip to the theater to see "The Tempest," which triggers his fears, cements their attraction even as it causes tongues to wag.

However, the couple's happiness is short lived as they receive bad news. Things improve slightly when Louis and Emily take in a cat that they name Peter. Peter brightens their spirits and inspires Louis' talents. And before tragedy strikes, there is a moving scene of Emily and Louis talking about their mutual appreciation for each other.

Sharpe films all this in a style that accentuates the eccentric. He uses Dutch angles, an unsteady camera (to convey uneasiness), and irises to emphasize emotion or suggest a memory. He employs the theremin to provide an offbeat score. There is also meowing on the soundtrack and some of the cats' dialogue is subtitled. At its wildest, Sharpe fills the screen with kaleidoscopic images, to indicate Louis' deteriorating mental state as grief, financial pressures, and other things overwhelm him. (One of his sisters also suffers from mental health issues).

"The Electrical Life of Louis Wain," is deliberately more fable than biopic. The film makes its points about Louis' poor decisions — like his failure to secure a copyright for his work — but is more focused on showing his resilience. His idea to go to America is in his mind a good one, but the reality of him lecturing suggests otherwise. Sharpe has Louis, who anthropomorphized cats in his illustrations, envision cat heads on people in the audience. Louis also has an unsettling, nightmarish moment on the ship on his journey home. In addition, scenes of Louis chasing electricity seem to emphasize his madness.

If Sharpe's treatment of his subject is at times fanciful — a National Cat Club meeting is whimsical — it is always respectful. A late scene in the film, where Louis reconnects with Dan Rider (Adeel Akhtar), a man he met decades earlier, is quite poignant. Louis' character is celebrated throughout the film for being different. As H.G. Wells (Nick Cave) indicates in a radio broadcast, Louis Wain was "devoted his life to making all our lives happier, and cattier…. He changed our world for the better."

Cumberbatch embodies Louis Wain in the same way he did Alan Turing in "The Imitation Game," by using his tics and idiosyncrasies to show his genius and his fragile mental state. It is an unselfconscious performance that never feels mannered or fussy (even when it is supposed to be). When Wain talks to his cats it is not a cutesy affectation but a man who is making a connection that informs his world, others be damned. In support, Claire Foy captures Emily's quirky boldness that provides a good balance for Louis' more frenetic nature. And Andrea Riseborough is terrific expressing considerable disdain with just a sidelong glance.

"The Electrical Life of Louis Wain" is uneven, and it feels a little too calculated, but it is a diverting tribute to its subject. Moreover, the film's end credits showcase some of Wain's artwork that will be catnip for some viewers.

"The Electrical Life of Louis Wain" is available Nov. 5 on Amazon Prime. Watch the trailer for it below, via YouTube.