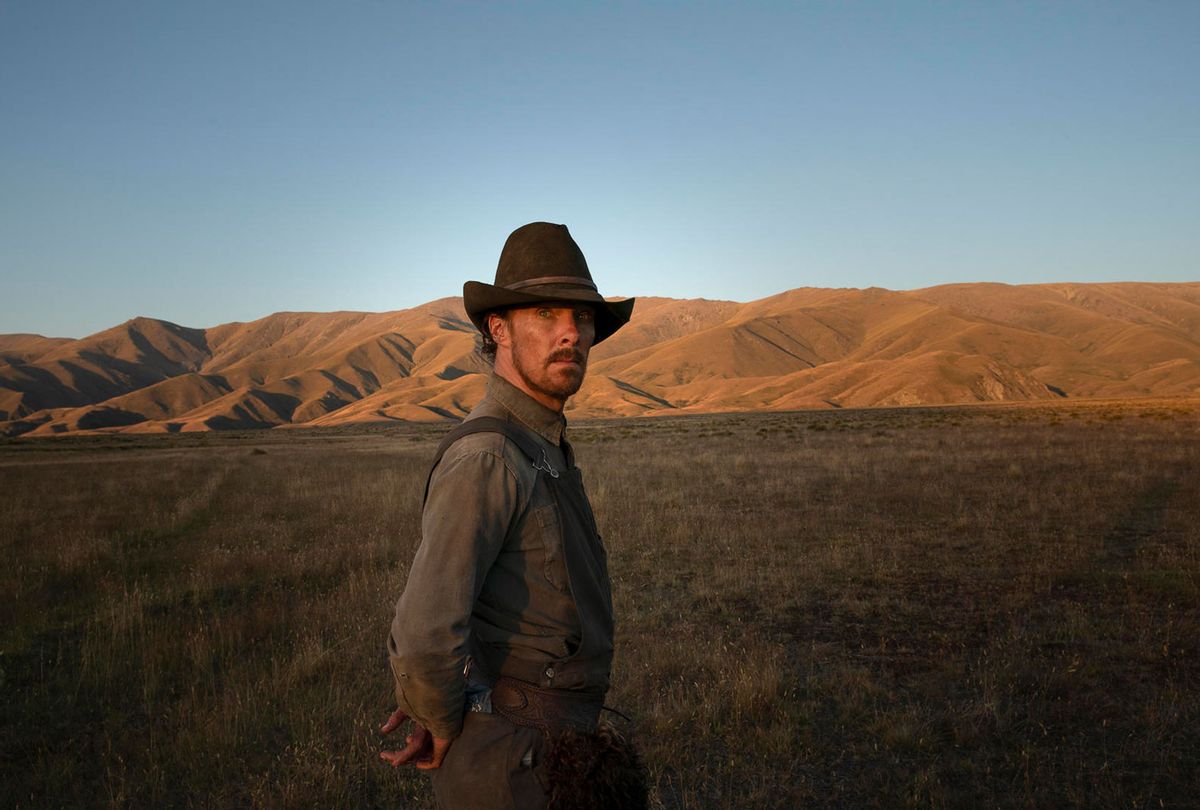 Benedict Cumberbatch in "The Power of the Dog" (Netflix)
--

Set in 1925 Montana — but filmed in New Zealand — "The Power of the Dog" is an exacting drama about masculinity, toxic and otherwise. Written and directed by Jane Campion, who adapted Thomas Savage's novel, this drama is exquisitely made, from the breathtaking landscapes to the detailed interiors. Much of the film is lensed with an amber glow. It is almost too pretty given that the lead character, Phil Burbank (Benedict Cumberbatch) is as ugly as he is grimy. "I stink and I like it," he says defiantly at one point, and viewers can almost smell him.

Phil is both the hero and the villain of the piece. He is a cunning, wealthy rancher and a bully. He calls his brother George (Jesse Plemons) "fatso." At a restaurant run by the widow Rose Gordon (Kirsten Dunst), Phil teases her effeminate son Peter (Kodi Smit-McPhee) for making flowers out of paper and because Peter speaks with a lisp. Rose, who is supportive and accepting of her son, just cries at how Phil treats Peter, and holds Phil in contempt, eyeing him with both fear and hatred. In contrast, Phil is respected by his men because he sees something in the nearby hills his men can't, indicating his superiority.

RELATED: The anguish of dinner with "The Humans"

The first half of the film is a long, slow setup. George marries Rose, which infuriates Phil. (He is so mad, he takes his anger out on his horses, signifying he is, without a doubt, a bad person). A lovely scene has the newlyweds stopping in a field along the road to drink some tea. Rose teaches George how to dance, and he actually cries, happy that he has someone to share his life with — other than his domineering brother. Campion generates just the right amount of emotion here, and the gorgeous Big Sky backdrop certainly helps.

But the couple's happiness does not last. Phil makes Rose very uncomfortable inside the house where they all live. He mocks her when she plays the piano George gets her, and spies on her as she secretly takes sips of bourbon in the alley behind the house. Rose drinks too much and kind of crumbles over the course of the film — in part because she is paralyzed by fear. Watch her when the Governor (Keith Carradine) comes for dinner and Rose is too stricken to talk or play piano. Dunst makes Rose's fragility and vulnerability poignant, even tragic, but it is a flimsy role, given the narrative shift the film takes. (George disappears for long stretches).

When Rose and George make love, Phil is so exasperated, he oils up the saddle that belonged to Bronco Henry, Phil's mentor, who died a while back. Phil has a sexual, almost fetishistic devotion to Bronco Henry, and it slowly becomes clear why. Cumberbatch is playing a repressed homosexual, who overcompensates for his longings by acting tough. (Watch him castrate an animal without gloves!) Campion frequently shoots Phil from below, to make him more menacing, and it works. She also captures him stealing away to pleasure himself, indicating how he compartmentalizes his sexuality.

"The Power of the Dog," however, gets interesting when Peter, who has gone away to school around the time his mother marries George, reenters the picture. While Peter tries to avoid Phil, circumstances keep pulling these men together, and eventually, Peter discovers Phil's dirty little secret. Peter and Phil may be two very different men, but they are, of course, more alike than either want to admit. An unlikely friendship of sorts soon develops between them, cemented when Peter can see what Phil does in the hills.

And so, Phil teaches Peter how to ride a horse, and Rose trembles at the thought of her son being alone together with a man she despises. Campion generates much of this leisurely drama's tension here as something is definitely going to happen between these two men — it is just a matter of what and when. They do have a heart to heart one afternoon that is encouraging, and Phil admires Peter's ability to dispatch a wounded rabbit. When they later share a cigarette, the moment brims with homoeroticism. Campion, however, lets what is coming sneak up on viewers, just as it does the characters. It is a nice payoff (even if she plants some clues), because the story gets more involving once Peter and Phil become chummy.

Cumberbatch gives another strong performance here, making Phil a brute who sucks all the oxygen out of the room, but also someone whose every word, every gesture has purpose and meaning and intent. He knows how to push buttons, and delights at it. Just watch him goad George who tries to deliver a message to him (to clean up) in one scene. Or how he drawls, "Ain't that purdy" about Peter's paper flowers, before using one to light his cigarette. Cumberbatch also slyly reveals his shame in a scene where he happens upon his men frolicking naked in a river, before riding away to be alone.

"The Power of the Dog" is certainly an allegory about control and love, lost and found, and Campion's masterful command of the material, in addition to the strong performances and the striking visual style make this a potent piece of filmmaking.

"The Power of the Dog" is now streaming on Netflix. Watch a trailer for it below, via YouTube.