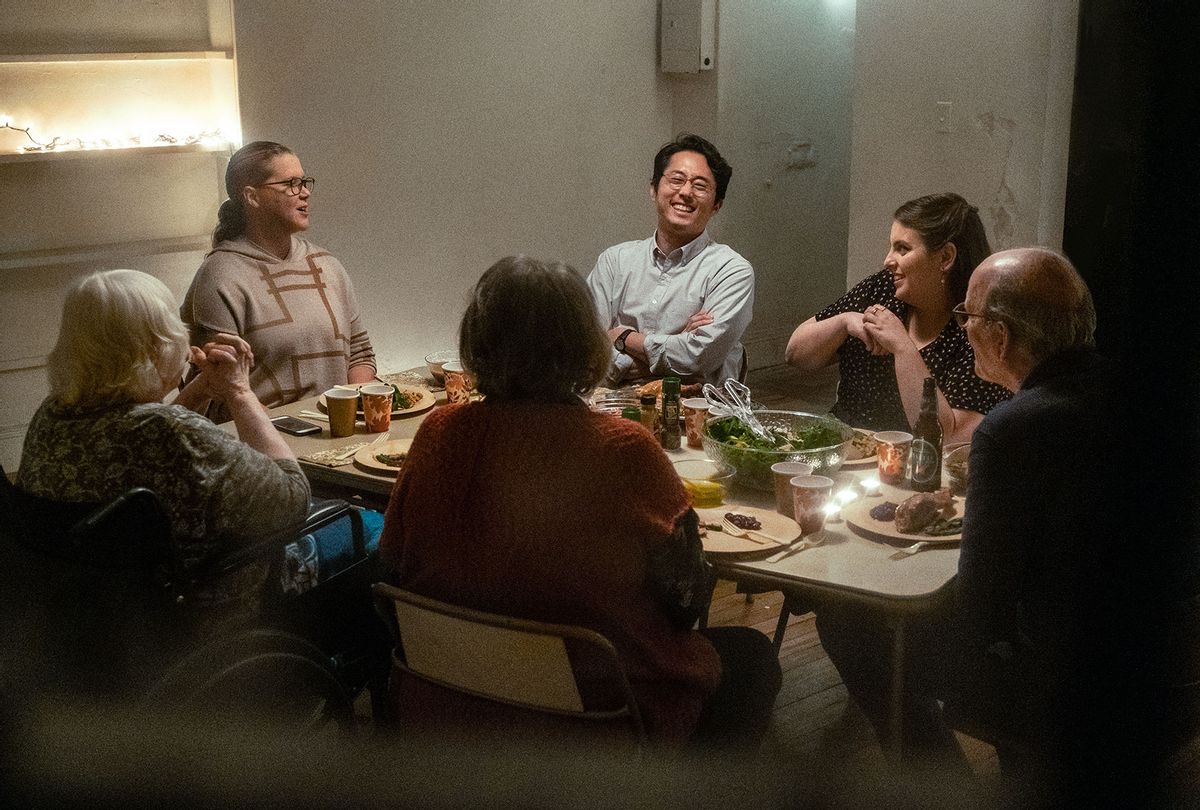 "The Humans," writer/director Stephen Karam's arty, melancholic screen adaptation of his Tony award-winning play, is painful in a good way; the anguish of the characters is aching and heartfelt.

The film opens with images of the sky as seen from an interior courtyard of a New York City apartment building. It's the reverse-image of a "God's eye view," but still signifies the insignificance of people. It also establishes the relentless sense of claustrophobia in this film, which is set almost entirely within one such interior courtyard apartment for the "very special Chinatown edition of the Blake family Thanksgiving."

Brigid (Beanie Feldstein) and Richard (Steven Yeun) have just moved into the apartment and they are still waiting for their furniture to arrive. Their mostly empty duplex is in a bit of disrepair; Karam emphasizes the grimy windows that characters can't see out of, the water stains on the ceiling, imperfect tiles, and numerous other flaws in the apartment. (Read these "reaction" shots, of course, as symbols of the troubled characters, or the characters' troubles.)

One uncomfortable scene, early in the film, has Erik (Richard Jenkins) trying to get his mother, Momo (June Squibb), who has Alzheimer's, out of the bathroom, into her wheelchair, and down the narrow hallway. This episode, which is darkly funny or extremely exasperating (or both) conveys everything, from how tight-knit the family is, and the burden of parents on their (adult) children, to the limitations of any given situation and how these resilient folks manage. Momo's gibberish only adds to the already fraught situation.

RELATED: "Drive My Car" director says conversing in vehicles "makes it easier to reveal parts of yourself"

Most of the scenes in "The Humans" examine how characters are coping with their miseries. Erik is haggard and forlorn — and not just because this Scrantonian is in Lower Manhattan, a place that haunts him; he was at ground zero during 9/11. Erik has had trouble sleeping recently, and when he does sleep, he has weird dreams. He engages in pleasant but awkward small talk with Richard, an affable young man, who is masking some despair of his own. Their exchanges are casual, genial, because the outsider Richard wants to make a good impression, and the anxious Erik wants the visit to go smoothly so he can go home.

However, there are real tensions brewing between Brigid and her mother, Deirdre (Jayne Houdyshell, reprising her Tony-winning role). Whenever these characters talk to one another, they are sniping — full of criticism, bitterness, nagging, sarcasm, and even contempt. Brigid's sister Aimee (Amy Schumer) mostly tries to stay out of the line of fire; she is mourning the loss of her job, and the loss of her girlfriend, while also grappling with colitis.

Karam follows these characters in and around the apartment, tracking them from behind or zooming in on them, as if eavesdropping on this family. He captures them in private moments, as when Aimee sneaks away to reach out to her ex, or when Deirdre quietly sobs, alone at the dinner table. These episodes are incredibly moving because they show these women at their most honest and vulnerable. The elegiac shots are right out of an Edward Hopper painting, and a line about the family's "stoic sadness" rings true.

Such moments sneak up on viewers as Karam deliberately does not build much momentum as his one-act drama unfolds. The realism of watching these family dynamics ebb and flow is absorbing, but the direction can be too self-conscious. Karam moves his camera around a dinner table scene so much in one sequence, viewers may want to slap the cinematographer (Lol Crawley) to make him stop. There are many shots of people seen in mirrors, or a recurring image of a feather on the windowsill seen from outside the apartment, that are meant to be thoughtful, but feel stagy. Similarly, a recurring motif of lights going out starts to get contrived, no matter how representational it is. Better is the use of sound in the film to create importance — the creaking floorboards, or the percussion of an upstairs neighbor — that rattle the family's nerves.

A reflective moment has Erik looking out the window at snowflakes, before being startled by a pigeon. When Richard suggests it is an upstairs neighbor emptying their ashtray, it adds another layer of meaning, a reference to the horror of 9/11. "The Humans" is at its best in these small, telling moments, or when Karam features a shot in the end of the film that pulls back to make the dark, empty apartment look like a multileveled stage set.

In his cinematic directorial debut, Karam may overdo the visuals, but this may be a function that the medium of film allows him that indulgence. He certainly knows his materials well enough to coax strong performances out of his cast, who can talk indistinctly or pause to help create the chilly mood.

The superb acting compensates for the directorial flourishes. Richard Jenkins plays Erik as a shell of a man. He can say or do the wrong thing — especially when he tries to comfort his emotionally wounded daughters — but still loves them and wants their love in return. His own anxiety, however, becomes even more overwhelming as he wanders, alone and frightened, through the dark apartment in the film's climax. It is a magnificent sequence.

However, Houdyshell is the real star of "The Humans." She is absolutely heartbreaking in a remarkable moment, late in the film, where she tries to make a decision about having dessert. With her hesitation and indecision, and a comment from Erik, she reveals the extent of her shame and self-loathing and self-respect. Deirdre endures considerable mocking from her daughters, but she does care for them deeply — even though they reject the religion she clings to (she gives Brigid a Virgin Mary statue) and they chafe at her nagging and emails. A poignant scene has Deirdre overhearing her daughters having a conversation at her expense. The brave face she puts on shows her true character.

In support, Beanie Feldstein is appropriately annoying and chipper as Brigid (that is a compliment), yet as her façade begins to crumble, Feldstein makes her character's breakdown credible. Likewise, Amy Schumer is very affecting in her big dramatic scenes. Alas, both Steven Yeun and June Squibb, while fine in their roles, seem underused here.

"The Humans" is a bracing film that illustrates how family members inflict pain and suffering on themselves and each other, but also how they endure.

"The Humans" is in theaters Nov. 25. Watch a trailer for it below via YouTube.