No, it's not Hannibal Lecter cosplay or a Korean beauty treatment, but it is all the rage on the pitch at Qatar 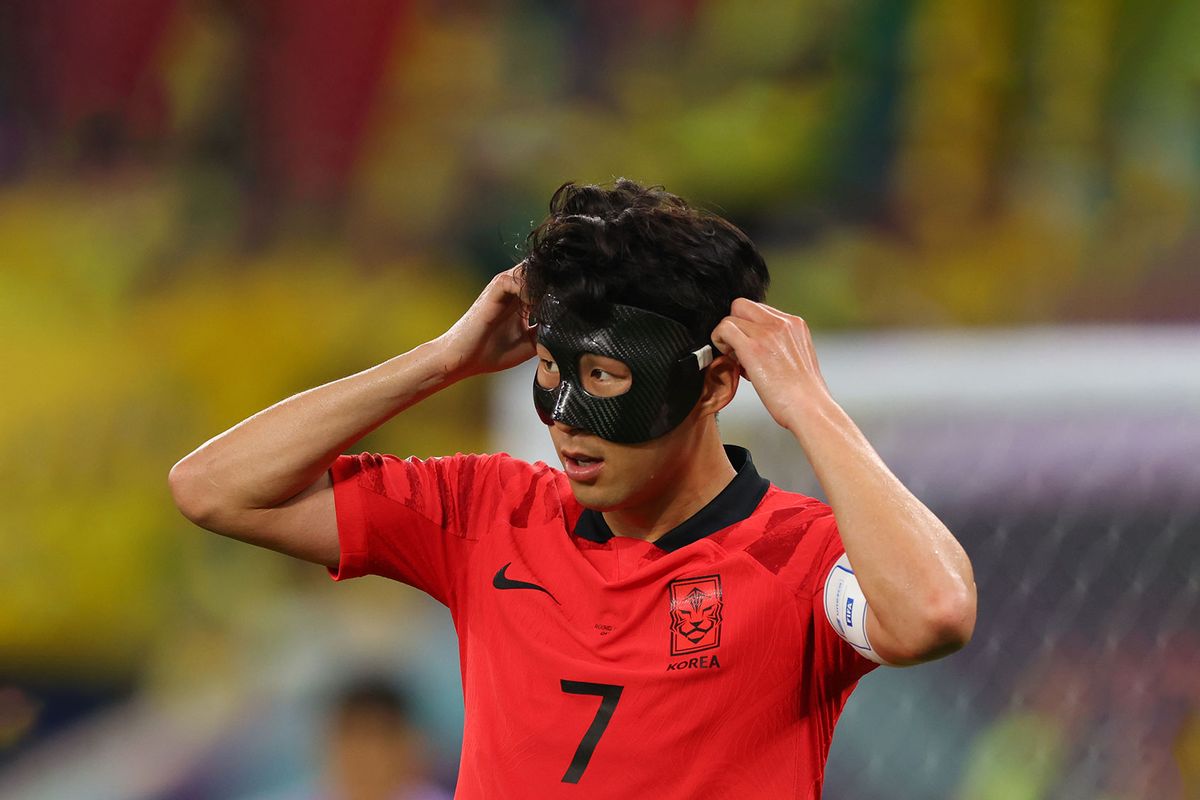 Son Heung-min of Korea Republic adjusts his protective face mask during the FIFA World Cup Qatar 2022 Round of 16 match between Brazil and South Korea at Stadium 974 on December 5, 2022 in Doha, Qatar. (Marc Atkins/Getty Images)
--

Although South Korea failed to advance to the quarterfinals following their loss against Brazil, the team emerged as a fan-favorite this World Cup. Sure, they gained attention for their skills on the field, one player's idol-worthy face, their infectious charisma and . . . their teammate's choice of facial accessory.

The player in question is Tottenham Hotspur forward / South Korea's captain Son Heung-min, who was spotted sporting a puffy all-black mask on the international pitch. Many may have mistaken Son's mask — which covered the top half of his face, including his nose — as his attempt to cosplay Hannibal Lecter or Batman. Or could it be another Korean beauty product? But in actuality, the hi-tech covering was worn as a measure of protection.

Qatar 2022 WTF: How the World Cup got lost in the desert of the real

Here's a closer look at Son's getup along with the other World Cup players who followed suit and recently wore masks:

Prior to his showcase in Qatar, the 30-year-old star suffered a fracture around his left eye socket during Tottenham's win against Marseille in the Champions League on Nov. 1. The injury, which took place just 19 days prior to the start of the World Cup, initially jeopardized Son's return to the international arena. But after undergoing surgery and medical rehabilitation, Son recovered just in time to reprise his role as captain of South Korea's national team.

Son first wore a protective mask in training to help shield the area around his injury. He then wore it during subsequent matches.

Following South Korea's opening game at the World Cup against Uruguay, Son said his mask was "more comfortable than I thought. It's made of good material," per The Guardian. "It's light, hard when worn on the face, and it's a good material that can protect against impact. I was surprised that it was considerably lighter than I thought."

"I'm just happy that with the mask, I can play," Son also said, according to Reuters.

A common sight at the World Cup

In addition to Son, RB Leipzig centre-back and Croatian player Josko Gvardiol has been wearing a mask to protect himself from further damage after he broke his nose and injured his face and eyes while playing for his club.

Tunisia's Ellyes Skhiri also wore a mask during his teams' games against both Denmark and Australia. Back in October, the FC Köln midfielder broke his cheekbone.

And lastly, Iran's goalkeeper Alireza Beiranvand wore a mask — only during practice, though — after injuring his face during a match against England. Beiranvand sat out Iran's match against Wales but played during his team's final group stage match against the United States.

about the World Cup: