The Beyond Burger took a downturn in 2022 — was our taste for meatless meat always doomed? 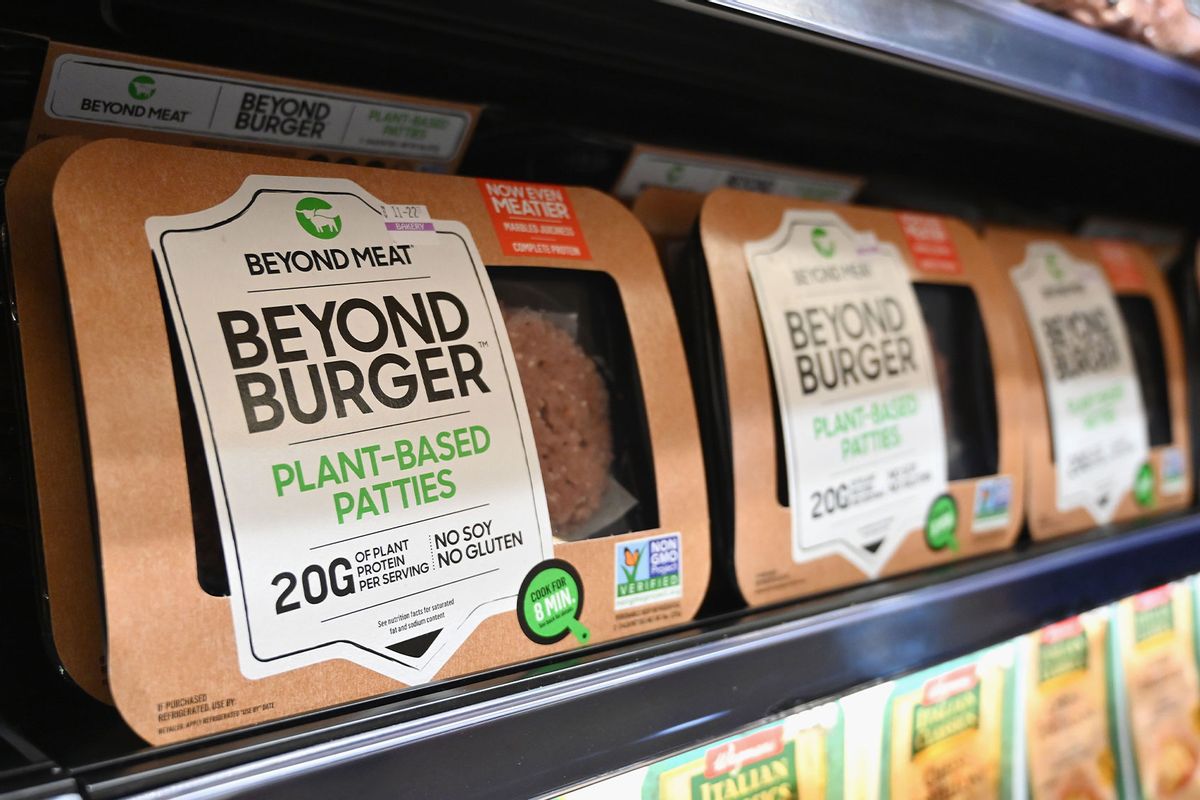 In this file photo taken on November 15, 2019 Beyond Meat "Beyond Burger" patties made from plant-based substitutes for meat products sit on a shelf for sale in New York City. (ANGELA WEISS/AFP via Getty Images)
--

You might think it was the beginning of the end of the Beyond. After showing up on every menu you opened, carving out entire new neighborhoods in your supermarket aisles and monopolizing the conversations of your all plant-curious friends for the past few years, alternative meat has recently lost some of its cachet.

Last month, a Motley Fool report noted that the Beyond Meat company's stock had declined a stunning 85%, and that 200 staffers have been laid off. "As well as consumers rejecting its product," journalist Rich Duprey observed, "distributors and retailers weren't ordering more of it, either." Our consumption of the old-fashioned kind of meat, in contrast, has not abated at all. We eat more beef now than we did a decade ago, and our poultry consumption, meanwhile, is at an all-time high. Have we lost our taste for meatless meat?

A variety of factors seem to have led to the Beyond company's changed fortunes. In November, the Los Angeles Times reported that leaked documents and photos from a Pennsylvania factory revealed "apparent mold, listeria and other food-safety issues" including the presence of "foreign materials" in food from the plant.

But while the negative publicity is never good for business, it's unlikely that concerns over food safety have been translating to consumer trends. After all, if revelations about processing conditions really impacted buying habits, who would ever eat factory-farmed meat again? A recent Purdue University study found that even when participants were given "information nudges concerning possible environmental and health impacts of meat production," they were still "not able to change preferences toward a plant-based meat substitute."

Instead, the shift may come down more to simple economics. Jessica Randhawa, creator and writer of The Forked Spoon, tells Salon Food, "While the plant-based meat substitute market and market capitalization have declined this year, I think it has more to do with its pricing and inflation than with our tastes. Most people I know who have had the plant-based options enjoy them, but the cost makes it more of a luxury item."

"Curiosity caused the products to become popular, but over time the novelty has worn off. "

And then there's the boredom factor. (How's that Instant Pot you just had to have in 2018 working out these days?) Sara Bachmann, creator of Sara's Veggie Kitchen, says, "When these new plant-based meats were first introduced, the curiosity that it sparked caused the products to become popular, but over time the novelty has worn off. There is a time and place for meat substitutes like at your local burger joint but at home," she says, but "I would much prefer cooking with lentils, beans or mushrooms for a 'meat' replacement in meals and recipes."

Yet Paul Shapiro, CEO of The Better Meat Co. and author of "Clean Meat: How Growing Meat Without Animals Will Revolutionize Dinner and the World," warns against any hasty epitaphs for the meatless burger.

"I think the reports of the death of this industry may be premature," he says. "It's true that Beyond has suffered lately, but at the same time, Impossible claims that they're still growing 40% year on year. What's probably happening is that Impossible is taking some of Beyond's market." And he adds, "If you look at plant-based chicken brands, they're claiming massive growth this year. There's lots of ways to recreate the meat experience without animals."

Maybe my problem is that I don't want a meat experience (or a chicken one) without animals. I can admit that the first time I ever had an alternative meat burger — at the enthusiastic urging of a newly vegetarian friend — I definitely experienced a certain sense of disbelief. Disbelief at the fact that anyone actually enjoys this stuff. It was one of the weirdest-tasting things I'd ever eaten. It had texture, sure, but the flavor was, to my buds, unnatural and unpleasant. Over the years, I have periodically tried various types of meat substitutes, and they've always provoked the same intense displeasure.

Of course, the thing about taste is that it's highly specific. New York City chef and registered dietician Abbie Gellman notes, "Those products are not targeted to people who already eat vegetables. Those products are targeted to people who are meat eaters primarily and don't want to eat plant-based foods. That is why they were made to look and taste like meat. It's a different market." I will always gladly order a sweet potato or black bean burger or anything involving mushrooms, precisely because they taste like sweet potatoes or black beans or mushrooms.

As Salon senior politics writer Amanda Marcotte expressed a few years ago, I too prefer "appreciating vegetables on their own, instead of lamenting that they aren't meat."

And that's something to think about, for all of us wondering how we might want to eat better going forward into the new year. Maybe like me, you've given meat substitutes your best shot and know they're not for you. If you still consume meat, you might feel like Bhagyashree Katare, one of the Purdue study authors, who told the Guardian in September. "If I'm spending money in a restaurant, and I'm a meat eater, why would I spend money on plant-based meat? I would rather eat an actual burger." But if for the sake of your health, the health of the planet, and the welfare of animals, you'd like to at least reduce the amount animal products you consume, there are lots of ways to go about it.

Vegan coach Tenny Minassian advises, "Meat substitutes definitely have their place for people who are cutting down their meat consumption, or transitioning to a plant-based diet. However, a lot of people tell me they want to eat plant-based due to health concerns. I always recommend a whole-foods plant-based diet for them. They can create their own meat substitutes by focusing on protein-rich ingredients like tofu, tempeh, and legumes like lentils or beans. Adding walnuts and mushrooms to the mix helps give it the fat and the meaty texture you are looking for, without the added cholesterol that comes with animal products." And Stephanie Wells, MS, RD, a registered dietitian and owner of Thyme to Go Vegan Nutrition Services, similarly advises, "I think meat alternatives can be a great tool for people who are just starting to eat less meat, since you can cook them the same way you would cook meat." But she adds, "When I help clients find ways to eat less meat, I emphasize plant-based sources of protein like beans, lentils, tofu, edamame, nuts, and seeds, which should form the foundation of their diet along with whole grains, fruits, and vegetables."

"If people want to just eat less meat or no meat, that'd be great. But humans seem to really like meat."

Looking to the future, Paul Shapiro says, "We have to find ways of slashing the number of animals we are raising for food. Increasing demand, for me, is the number one cause of deforestation, the number one cause of wildlife extinction, the number one cause of antibiotic resistance and a driving cause of climate change. I'm bullish on these methods of recreating the meat experience — using plant proteins, using fungi fermentation and using animal cells. I think the task before us is to figure out ways we can give people the experience of eating meat without the need to raise and slaughter animals. If people want to just eat less meat or no meat, that'd be great. But humans seem to really like meat."

I still like to eat meat, too, albeit in smaller quantities. And like a lot of people, I am still on the learning curve of discovering what other foods to fall in love with, somewhere out there beyond meat.

about alternatives to meat eating