Winter storms are a normal part of this time of year. Yet climate change is making them more severe 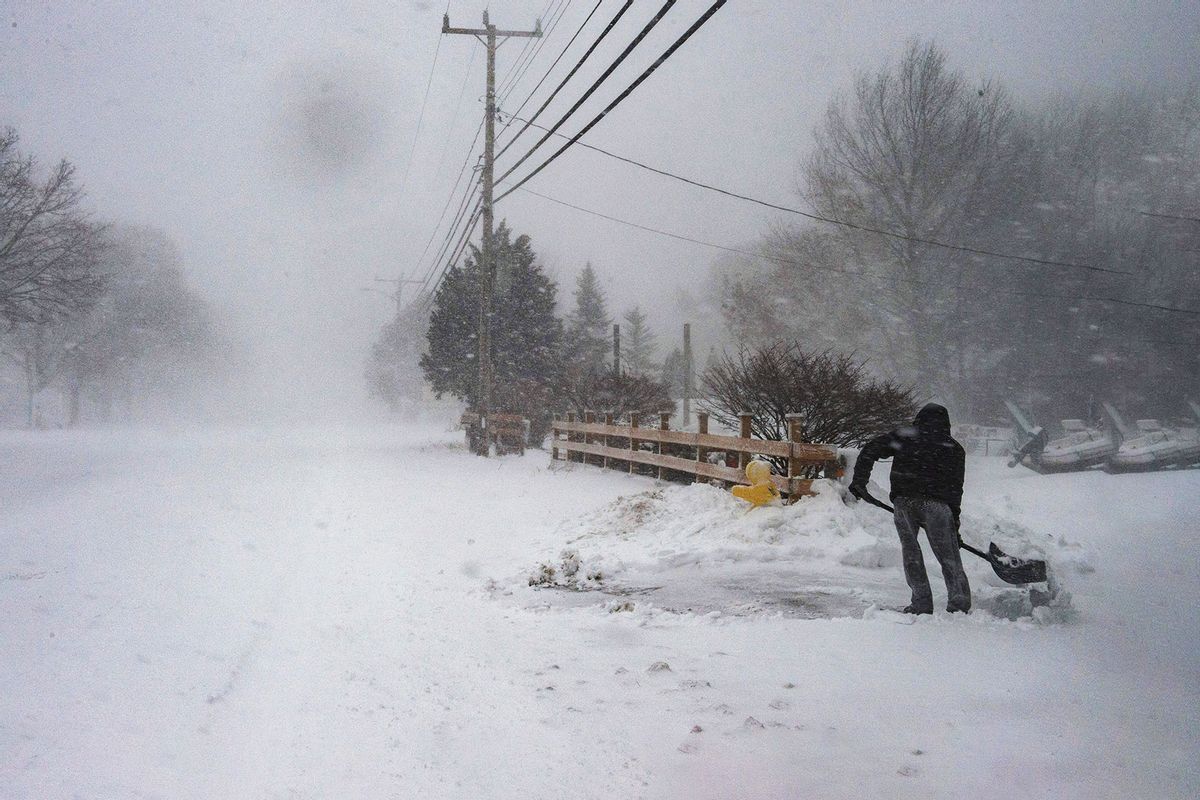 A man shovels snow in near whiteout conditions during a noreaster in Marshfield, Massachusetts, on January 29, 2022. (JOSEPH PREZIOSO/AFP via Getty Images)
--

As winter storms continue to pummel much of the United States, is climate change partially — or majorly — to blame?

As with any natural disaster that relates to the weather, it is natural to wonder whether climate change plays a role. Certainly the weather this winter has been extreme, with Texans and Oklahomans being warned of potential tornadoes and Americans everywhere bracing for possible power outages (which on their own can be devastating). Winter storms mean blocked roads, damaged property, crumbling infrastructure and possibly even injuries and deaths.

The big question for both policymakers and the public, therefore, is how much of the horrid weather can be definitively attributed to global warming.

Climate change experts say that the worsening weather is not merely a coincidence — climate change really is exacerbating our winter storms this year, as multiple experts told Salon.

America's power grid is broken. Here's how to fix it

"Winter storms develop in a climate change environment: it is warmer and moister," Kevin Trenberth of the National Center for Atmospheric Research (NCAR) told Salon by email. "But it is plenty cold in winter over the continent. It means snow amounts can be much greater: e.g. see Buffalo recently. They may be more intense: not guaranteed, but more developments ensue. Watch for a bad nor-easter."

While it may seem counterintuitive to attribute more snow to the planet warming, Trenberth observed that this only seems to be the case because the general public is insufficiently informed about how climate change works.

This does not mean that scientists can precisely quantify the extent to which climate change has played a role. According to Dr. Michael E. Mann — a climate scientist and director of the Center for Science, Sustainability and the Media at the University of Pennsylvania — it is "tricky" to figure these things out with precision.

"There's still quite a bit of debate about whether we can expect more events like the Texas cold spell last year due to climate change," Mann wrote to Salon. "On the other hand, there is evidence that warming leads to more powerful, snowier nor'easters—something we've seen quite a bit of in the northeast in recent years."

"There is evidence that warming leads to more powerful, snowier nor'easters—something we've seen quite a bit of in the northeast in recent years."

The good news is that, while there are many unanswered questions, scientists do know the means of accomplishing this. As Mann put it, they will use "high-resolution climate model simulations that better resolve the dynamics of powerful winter storms like nor'easters."

Mann added, "It's something I hope to look into in my own research over the next few years."

While the exact role of climate change in causing winter storms is murky, there is little question that the storms have been getting worse — and, in the process, have wreaked havoc on an American infrastructure that is simply not equipped to handle them. This was dramatically demonstrated last year when millions of Texans were left without electricity during an unprecedented winter storm because their power grid had not been designed for resiliency during adverse winter conditions.

"I would say that extreme weather in general—whether summer season extremes like droughts, heat waves, and floods, or winter storms like nor'easters—are disruptive to transportation, and labor, and all of the elements that comprise a supply chain," Mann told Salon. "So more extreme weather means more disruption of supply chains."

Trenberth added that the weather problems do not stop simply because there is an end to the "snow and ice and cold."

"In spring, the snow and ice melt can lead to flooding, as has happened in recent years over the upper Midwest," Trenberth wrote to Salon. This year, a La Nina year, [there was] more [precipitation[ in northern states." He added there could also be "possible continued drought in southern states" as well as "fire risk, especially as people get careless with heating."

Ironically, although Texas Gov. Greg Abbott tried to argue last year that the blackouts somehow discredited the need for a Green New Deal, one expert told Salon at the time that as climate change worsens, extreme weather events will further test America's infrastructure. Eventually there may be no choice but to rebuild it.

"From a Green New Deal perspective, we would want to have public utilities that prioritize public safety and resiliency and disaster readiness over the optimal price in a perfect market equilibrium situation and really nice weather — so I think that's an important distinction," Daniel Aldana Cohen, associate professor of sociology at the University of Pennsylvania and co-author of "A Planet to Win: Why We Need a Green Deal," told Salon at the time.