Taylor Sheridan writes women as grizzled hellcats, while the men of Dutton Ranch get to ride horses and eat beans 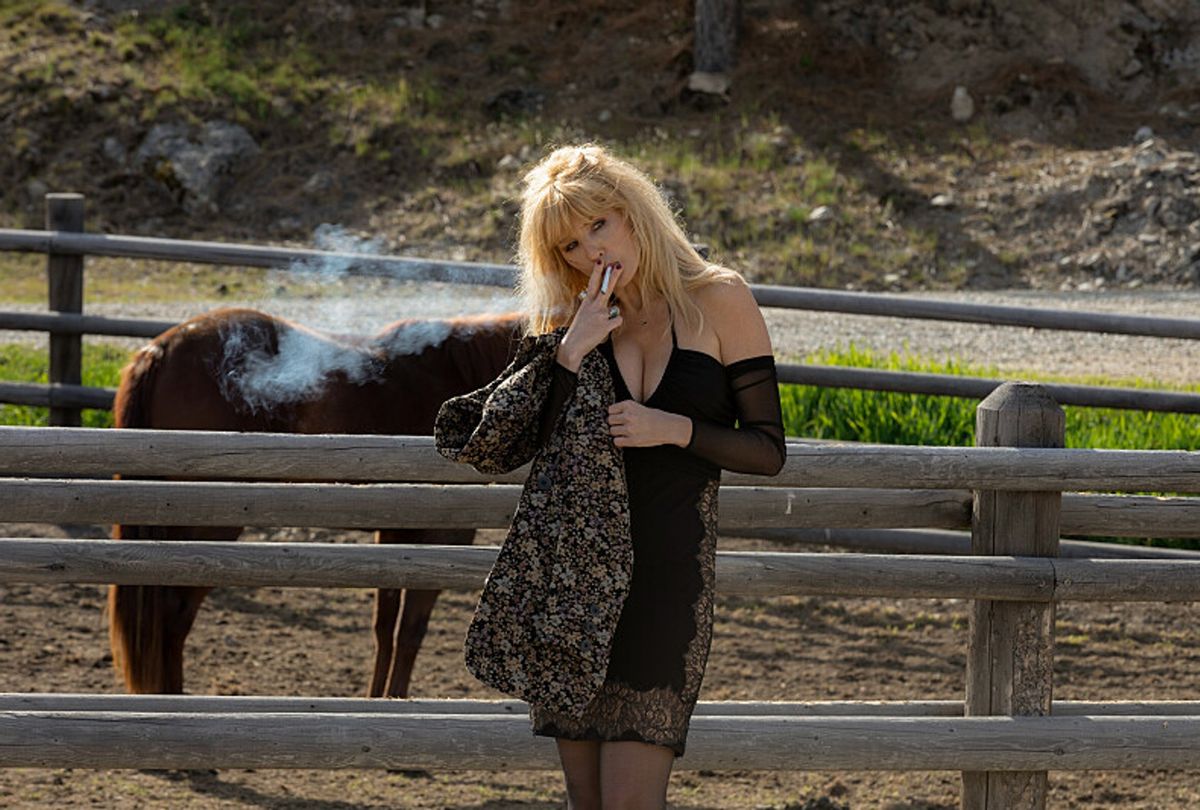 Watching "Yellowstone" actress Kelly Reilly in interviews, it can be hard to imagine how a soft-spoken woman with a proper English accent could so perfectly embody a character like Beth Dutton.

Beth Dutton swigs hard liquor from sun up till sun down, breaks in newcomers to the Dutton Ranch by challenging them to fistfights in the front yard, and has scars on her face and burns on her back from being put through hell over five seasons of Taylor Sheridan's wildly popular Western series. Reilly attended Tolworth Girls' School in Kingston for Christ's sake. She doesn't even like cigarettes, insisting on herbal substitutes for her character's chainsmoking scenes. But watching Reilly in interviews, if you look closely, you can see that inner strength she pulls from to switch into Beth-mode. It's there, just behind the eyes.

In real life, most women are afforded the privilege of letting their strength well up from within, but for the women of "Yellowstone," they're made to yell and scratch and claw in an outward endless cycle just to stake their claim alongside the male characters in the show who, when not gallantly riding off on horseback to the tune of a newly signed country artist, are playing grab-ass over a can of beans or something. On the Dutton Ranch strong men are just strong men, but strong women are grizzled war-torn hellcats which, especially in the fifth season, often reads as just "crazy" rather than strong.

The "Yellowstone" effect: Welcome to the new era of TV Westerns

When the character Beth Dutton was introduced in Season 1 of "Yellowstone," she quickly appealed to female viewers who could watch her live her outspoken — frequently violent — truth and fantasize about being in her expensive leather boots. But the problem with a character like this, who comes out swinging as hard as she did, is that there's really no way to level up on her wildness while maintaining the original integrity of her character.

To paint a comparison, Beth's love interest on the show, Rip Wheeler (Cole Hauser) started off as a gruff but well-respected monosyllabic cowboy with a rocky past who, over five seasons, has developed into a wiser and even more dependable version of that very character sketch. Beth, on the other hand, started off as a sentient version of a freshly ignited piece of charcoal and has since gone from smoldering to red hot and now white hot. And though, at the time of this writing, the series has yet to be picked up for a sixth season, it would seem unlikely that the network would do away with a show this popular. Which presents the question, where can Beth go from here? If the show's creators haven't let their foot off her yet, there are only two options: allow her character to develop with the same dignity as the men of Dutton Ranch, or press down even harder and send her burning rubber straight towards prison, a mental facility or her grave. All of which would certainly bring about the end of the show because, at least for me, "Yellowstone" would not be anywhere near as enjoyable to watch without Beth.

A sign that the series may be, sadly, headed towards the last option is the frequent use of other female characters who they can depict as being wildly unhinged when not focusing 100% on Beth for their punching bag purposes. There's Summer Higgins (Piper Perabo) who was brought on last season as a love interest for John Dutton III himself (Kevin Costner) and Monica Long Dutton (Kelsey Asbille), wife of Kayce Dutton, who has been around since the beginning, mostly in scenes where she's shown either crying or "nagging" about something, but has been getting more scene time this season. She's still mostly crying about things, but now she gets to yell about stuff a fair amount as well.

As a general rule, if there's a woman on screen during "Yellowstone" she's either fighting, f**king, crying or yelling. I guess that's the cowboy way?

In an interview with Entertainment Weekly earlier this year, Reilly is asked to drop some hints on Season 5 of "Yellowstone" prior to it airing and says, "The problem is, how do we top it every year?" Which, in truth, is really only a problem for the show's female characters in a series where the male characters are left in peace to occupy manly men space, clomping along in the friscalating dusklight, not having to endure physical and mental torture on the daily to remind viewers that they're tough.

"Some of the same challenges; protecting the land, looking after my father," Reilly says of her character's journey in this most recent season. "Just when I think Beth might be trying to maybe mellow down a bit . . . that's not happening."

As with the interview I mention at the top of the story, you can see a certain something in her eyes in this one as well. She's exhausted. She likely hopes for her shooting days to not be so grueling with back-to-back tussles and screaming matches. If I'm reading her expression correctly, she wants to not have to fight so hard for viewers to catch on to the fact that she's the strongest character on this show. Put some respect on Bethany Dutton's name. Scratch that. She's not a Bethany, she's a Beth. And she's not crazy, at all. She's the reason this show is as big of a hit as it is. Strength and bravery have little to do with going wild-eyed foam-mouthed mental, and a character like Beth could show us what that looks like, if only given the chance.