"We're open to that": AOC floats speaker deal with GOP after talks with Matt Gaetz and Paul Gosar

Rep. Alexandria Ocasio-Cortez said Democrats would be interested if they can get some committee chair assignments 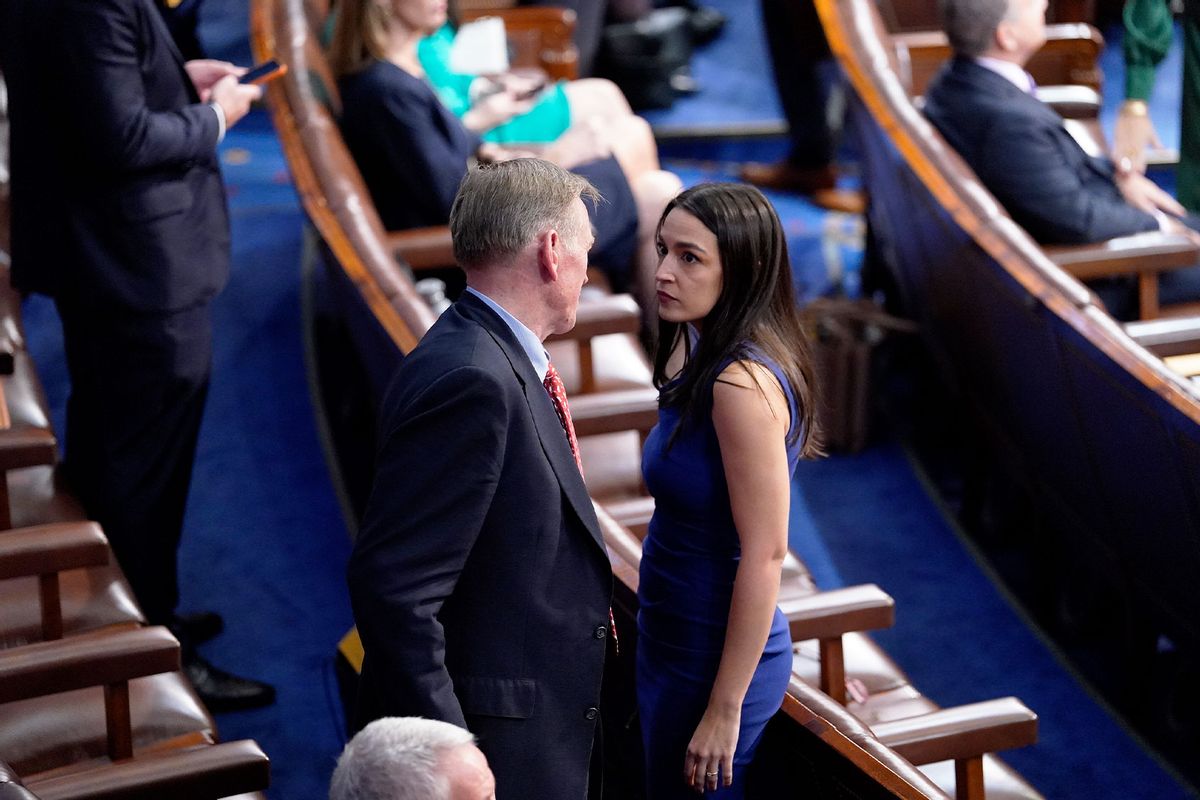 As House Republican Leader Kevin McCarthy, R-Calif., lost three more rounds of votes for speaker on Wednesday, some House Democrats floated a potential deal with Republicans – even as their own caucus chair threw cold water on the idea. But amid the chaos of the GOP's ongoing schism, the pressure to end the Republicans' two-day debacle has grown, with hopes of a Democratic deal spurred by comments from Rep. Alexandria Ocasio-Cortez, D-N.Y., and Rep. Marcy Kaptur, D-Ohio.

On Tuesday, Ocasio-Cortez was spotted chatting on the House floor with McCarthy detractor Rep. Matt Gaetz, R-Fla., stirring speculation about possible cross-aisle negotiations. Gaetz said McCarthy was betting on Democrats to cut a deal with McCarthy, voting present to allow him a win, Ocasio-Cortez told The Intercept on Tuesday.

"McCarthy was suggesting he could get Dems to walk away to lower his threshold," Ocasio-Cortez said. "And I fact checked and said absolutely not."

In the long hours that followed, however, her position may have shifted. In an interview with MSNBC's Alex Wagner, Ocasio-Cortez again affirmed that Democrats were uniting behind House Democratic Leader Rep. Hakeem Jeffries, D-N.Y. She hinted, though, that other options could still be on the table when asked.

"So the question is, is there anyone in their caucus that can build that consensus? If there isn't, McCarthy's team may have to come to the Democratic Party," she said. "And, if that's the case, then what would that even look like? It's rather unprecedented. Could it result in a potential coalition government?"

"If they want to play ball, we're open to that," she added.

However, Ocasio-Cortez on Wednesday stressed that McCarthy could not be the unity candidate.

"But, I mean, hey, if we could get some chairs," she told The Daily Beast's Ursula Perano.

"I wish I could be part of some kind of a unity caucus that would yield him the votes," she told NBC News. "I'm a Democrat, but I have many Republicans in our district. And not that we would agree with him on everything, but at least let the man become speaker."

"We would look at that, but I haven't seen any proof that Republicans are willing to engage," he told reporters at a press conference.

But some GOP members have raised the potential for negotiations.

Rep. Don Bacon, R-Neb., told CNN's Jim Sciutto that Republicans were already in "preliminary talks" with Democrats on a possible consensus candidate for House Speaker. Bacon reportedly mentioned possible concessions that could be made to Democrats, including skewing committee ratios more favorably for Democrats.

With no resolve after six rounds of votes for House speaker, the GOP is at an impasse over how to proceed. A deal with the Democrats, of course, could risk causing further backlash from the Freedom Caucus and potentially others in the Republican Party.

As Politico's Nicholas Wu hinted at in a tweet, the possibility of a third day – perhaps a fourth? – of GOP dispute looms ever larger.