"We don't have any idea what promises were made or what gentleman's handshakes were made," said Rep. Nancy Mace 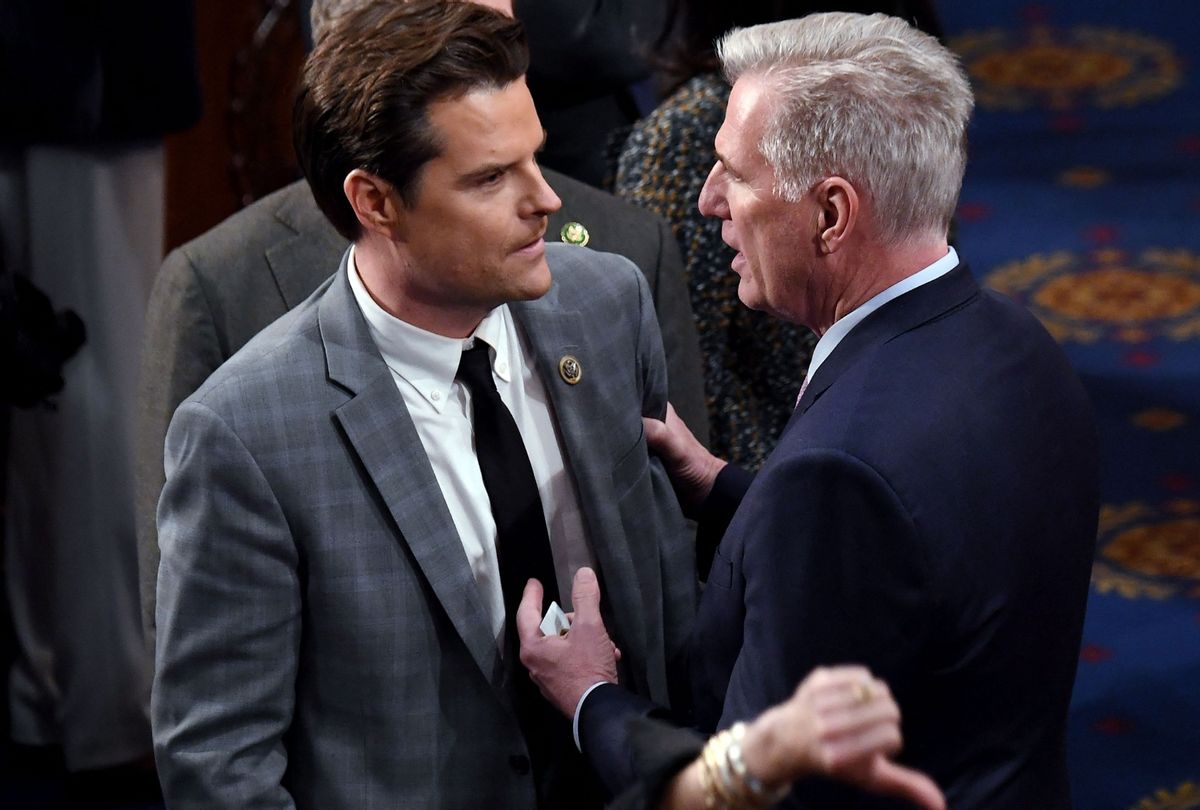 Kevin McCarthy (R-CA) speaks to Matt Gaetz (R-FL) in the House Chamber at the US Capitol in Washington, DC, on January 6, 2023. (OLIVIER DOULIERY/AFP via Getty Images)
--

McCarthy secured the support of most of the 20 Republicans that had opposed his speaker bid on Friday, finally winning his long-coveted job on the 15th ballot after convincing the remaining six holdouts to vote "present." McCarthy agreed to numerous concessions from the far-right group that have already been reported, but Mace raised concerns about potential dealmaking that has not been made public.

"What I saw last week was a small faction of the 20… trying to cut backroom deals in private, in secret without anyone knowing what else was going on," Mace told CBS News. "And when they did the rules package, at the end of the day, there was only one point that was changed. That was on the motion to vacate. That was the only difference in the package that we're going to be voting on tomorrow that was different from the original package that was proposed. So my question really is today is what backroom deals were cut- did they try to cut?"

Mace called Rep. Matt Gaetz, R-Fla., one of the leading McCarthy foes, a "fraud" for using the stunt to fundraise and accused the dissident group of hypocrisy over their claims that they are "fighting the swamp."

"Then they went and tried to act like you know, like, they actually are the swamp by trying to do these backroom deals," she said. "And we don't know what they got, or didn't get. We haven't seen it. We don't have any idea what promises were made or what gentleman's handshakes were made. We just, we just have no idea at this point. And it does give me quite a bit of heartburn, because that's not what we ran on."

McCarthy agreed to a number of concessions in the proposed House rules package, which will be voted on Monday morning. The package would allow any member to call for a motion to vacate the speaker's chair and remove McCarthy, establishes a select House committee on the "weaponization of the federal government," requires spending cuts to raise the debt ceiling, and votes on bills relating to top right-wing priorities like the border and abortion. A McCarthy-aligned super PAC also agreed not to fund candidates in open Republican primaries in safe red districts and House Freedom Caucus members landed additional committee spots, including on the powerful Rules Committee.

Mace told CBS that she likes the rules package but said she may vote against it due to her concerns about the deal-cutting.

"I support it, but what I don't support is a small number of people trying to get a deal done or deals done for themselves in private, in secret, to get a vote or vote present. I don't support that," she told the outlet, adding that she is "on the fence" about voting in favor of the rules package.

It's unknown what kind of deals may have been cut behind the scenes but Rep. Byron Donalds, R-Fla., revealed to Fox News on Sunday that he got a seat on the House Republican Steering Committee in exchange for his vote for McCarthy. The Steering Committee assigns Republicans to other House committees.

Gaetz, who voted present after leading the campaign against McCarthy, had privately sought the chairmanship of a House Armed Services subcommittee, according to The New York Times. Rep. Andy Harris, R-Md., pushed to head another subcommittee overseeing domestic spending, according to Politico. Freshman Rep. Andrew Ogles, R-Tenn., demanded a seat on the powerful Financial Services and Judiciary committees, according to Bloomberg.

Rep. Mario Diaz-Balart, R-Fla., told NBC News that he was assured that "there are no deals cut about chairmanships" related to the McCarthy vote. Rep. Don Bacon, R-Neb., said the demands riled rank-and-file Republicans.

"Nobody should get a chairmanship without earning it," he told the outlet. "When you tell someone, 'Hey, I'll vote for you if you make me a chairman,' that's crap. That pisses us off."

McCarthy after the vote denied that he "promised anything" but Gaetz told reporters that he reversed course after "I ran out of things I could even imagine to ask for."

Numerous Republicans have raised concerns that McCarthy conceded too much to the dissident group, undermining his speakership before it even began. Indeed, Gaetz bragged after the vote that McCarthy would be governing in a "straitjacket."

"What we're seeing is the incredibly shrinking speakership," former House Speaker Nancy Pelosi, D-Calif., told NBC News. "We are diminishing the leadership role of the House," she said.

Former Rules Committee Chairman Jim McGovern, D-Mass., told the outlet that the addition of Freedom Caucus Republicans to the committee could pose repeated headaches for the new speaker.

"The reason these people want to be on the Rules Committee is they want to screw things up for McCarthy. They want to micromanage every single thing that he brings to the floor," McGovern said. "He has given everything away, including his dignity, to try to become speaker. And if he becomes speaker, his nightmares just begin. He thinks this is bad — what he's going through right now? He ain't seen nothing yet, based on what he's giving away."