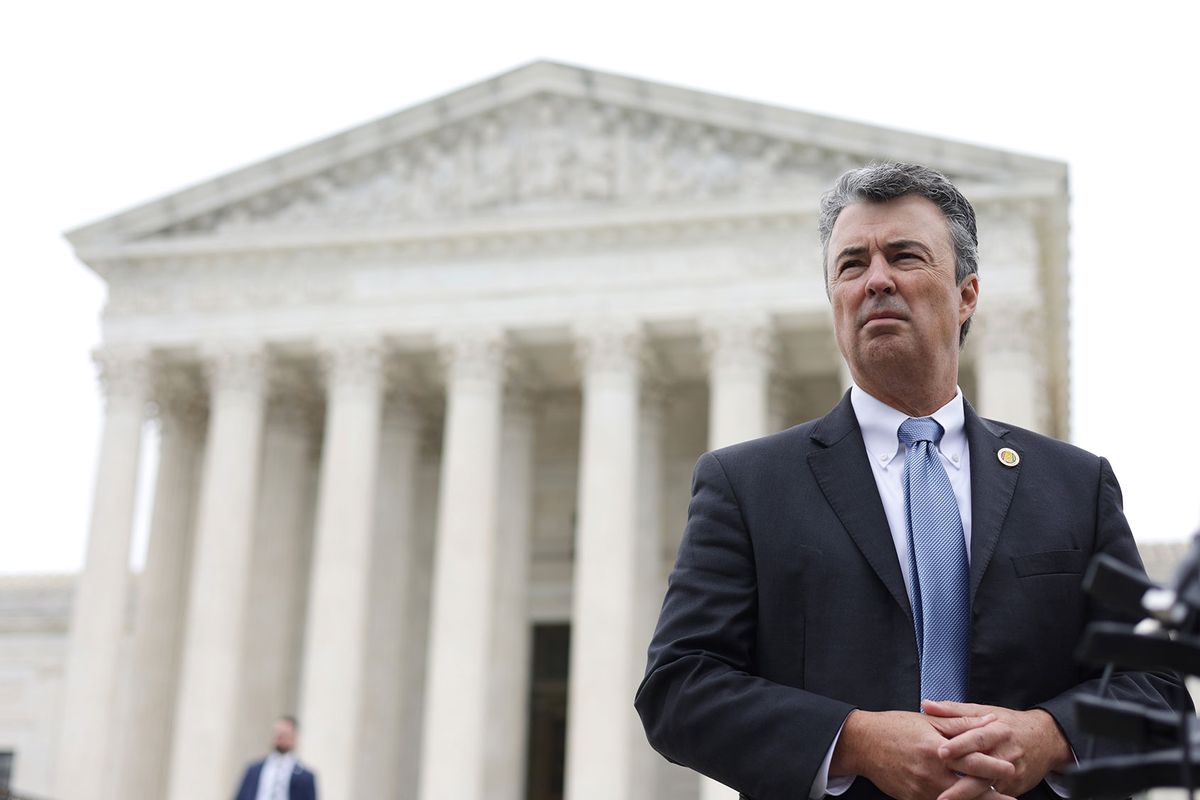 Attorney General of Alabama Steve Marshall speaks to members of the press after the oral argument of the Merrill v. Milligan case at the U.S. Supreme Court on October 4, 2022 in Washington, DC. (Alex Wong/Getty Images)
--

Alabama Attorney General Steve Marshall warned that women in Alabama who use pills to end pregnancies could be prosecuted a week after the federal government made access to abortion pills easier through retail pharmacies, according to AL.com.

Despite language in the state's new abortion ban that exempts people receiving abortions from liability, the attorney general's office said women could still face consequences under the state's "chemical endangerment of a child" statute.

"The Human Life Protection Act targets abortion providers, exempting women 'upon whom an abortion is performed or attempted to be performed' from liability under the law," Marshall said in a statement to AL.com. "It does not provide an across-the-board exemption from all criminal laws, including the chemical-endangerment law—which the Alabama Supreme Court has affirmed and reaffirmed protects unborn children."

"We learned nothing from the midterms": GOP pushes new abortion bills after 2022 disaster

The Food and Drug Administration finalized a change that will allow retail pharmacies for the first time to dispense abortion pills directly to people in states where the procedure is legal.

Anti-abortion advocates are already organizing pickets outside CVS and Walgreens next month in at least eight cities to protest the companies' plans to stock and dispense abortion pills, according to Politico.

Conservative advocates are also threatening legal action against pharmacies that opt to dispense the pill while other pending lawsuits are seeking to ban their use nationwide.

"We want people to be uncomfortable going into a CVS that has a demonstration going on and to consider going to a different pharmacy," Caroline Smith, a leader of the group Progressive Anti-Abortion Uprising, said in an interview with Politico. "We also want to put enough pressure on the companies to retract this decision and not get certified to sell abortion pills."

The Justice Department also issued an opinion that the U.S. Postal Service could deliver abortion pills to people in states that have banned or restricted the procedure, noting that mifepristone and misoprostol, which are commonly used to end pregnancies, can also be used for other purposes like managing miscarriages or treating gastric ulcers.

But in anti-abortion states like Alabama, where a near-total abortion ban took effect after the Supreme Court overturned Roe v. Wade in June, the new rules could result in clashes. The Justice Department's opinion would not protect a person who gets pills by mail and uses them to induce abortion in a state where it is illegal, The Washington Post reported.

"Promoting the remote prescription and administration of abortion pills endangers both women and unborn children," Marshall said. "Elective abortion — including abortion pills — is illegal in Alabama. Nothing about the Justice Department's guidance changes that. Anyone who remotely prescribes abortion pills in Alabama does so at their own peril: I will vigorously enforce Alabama law to protect unborn life."

In 2006, Alabama passed the chemical endangerment law to protect children from fumes and chemicals from home-based meth labs. But district attorneys began applying the law to women who had taken drugs, including marijuana, during their pregnancy or exposed their fetuses to drugs — a practice the Alabama Supreme Court has since upheld.

The law has since then been used to incarcerate women for years who have had miscarriages or stillbirths after using drugs, AL.com reported. In other states, women have been prosecuted for attempting to self-induce abortions.

In Texas and Georgia, women have been charged with murder over self-induced abortions, but both cases garnered media attention and were later dismissed.

about the GOP's war on reproductive rights