Two years after Jan. 6, it still divides our politics — and the press isn't helping 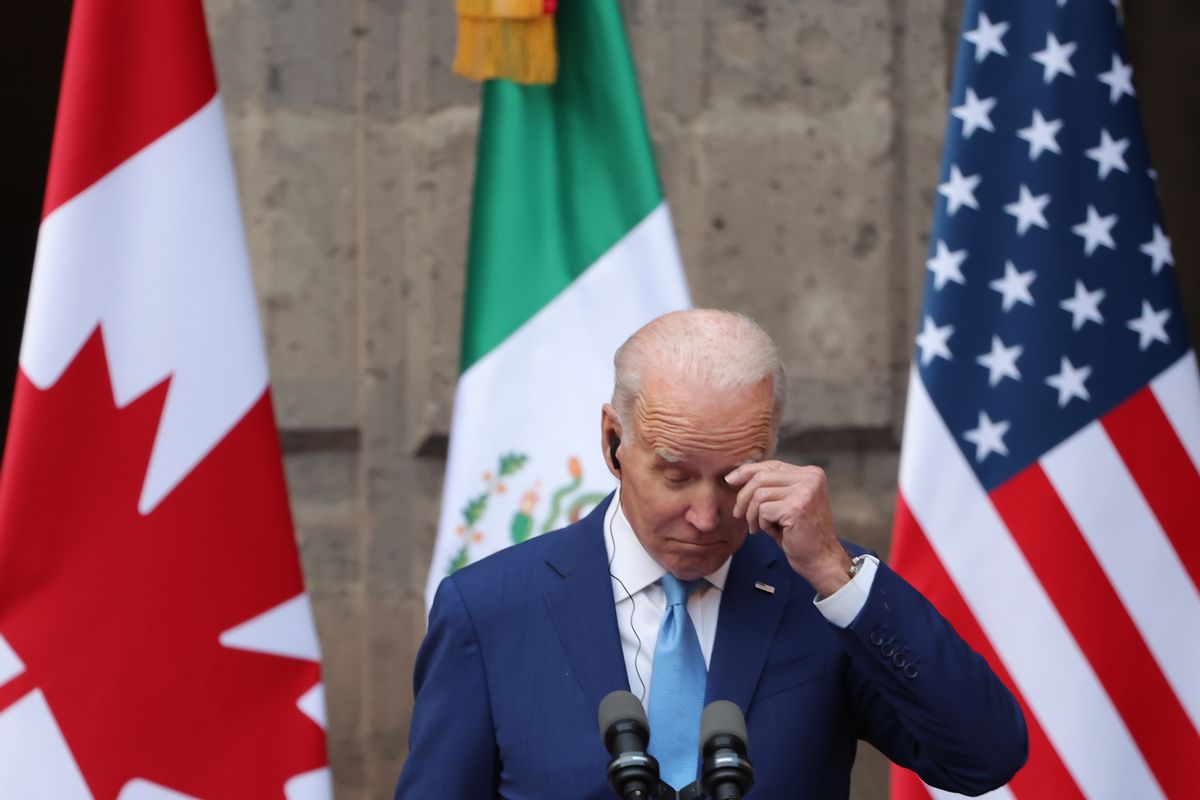 President Joe Biden during a message to the media as part of the 2023 North American Leaders' Summit at Palacio Nacional on Jan. 10, 2023 in Mexico City. (Hector Vivas/Getty Images)
--

Last Friday in the East Room, President Biden honored "the heroes of Jan. 6" at an emotional White House ceremony.

He gave the Presidential Citizens Medal — the country's second-highest civilian honor — to 14 people, including police officers who defended the U.S. Capitol against attack and election workers who refused Donald Trump's pressure to overturn the results of the 2020 election. Three of the medals were awarded posthumously to the families of police officers who died in the days after the attack.

The ceremony wasn't without its humorous moments. As Biden spoke, the cell phone of one honoree started playing the president's announcements on a live delay. "I never thought ... (long pause) ... I'd hear my own voice," he said to laughter before getting serious again. When he mispronounced a recipient's name and was corrected, he got another laugh by telling the recipient — Aquilino Gonell, a sergeant with the Capitol Police who was injured in the insurrection — that he could mispronounce the president's name.

Right about then, a young reporter turned to me as we stood watching the ceremony and said, "Wow, the president is really losing it. His Alzheimer's is showing," and then went on to mispronounce Gonell's name. That made me laugh.

Our biggest problem isn't Trump or Biden: The media is disconnected from reality

Then there was the moment when Capitol Police officer Harry Dunn, a towering former college football lineman, walked up to receive his medal. He said something that couldn't be heard by the audience, but he and Biden laughed together.

The same young reporter turned to me and said, "They were probably making fun of the insurrectionists." Later I found out that Dunn had joked about his height advantage over Biden (who is himself taller than average). The laugh they shared had nothing to do with the insurrection at all.

In both cases, the reporter was full of it. That's just the tip of the iceberg as far as the press goes these days. It's a minor if annoying example, but it speaks to the cynical and corrosive atmosphere of Washington.

Steve Scalise actually said, "Our committee chairs represent the very best of our conference." If those 11 seditionists are the best, who are the worst? No one wants to know.

Speaking of Congress, after a historic and tragicomic leadership battle in the House among members of the Republican Party, Kevin McCarthy emerged with a questionable victory as the new speaker of the House. He had to give away most of his power to bask in the glory of having a title which means less than ever before, but then McCarthy is no Rhodes Scholar. As a member of his own party told me, "I'm not saying he's stupid. I'm just saying he might have trouble spelling his own name." Then there's Rep. Matt Gaetz of Florida, who publicly mocked McCarthy while making continued demands that delayed McCarthy's mediocre ascension to semi-power. Rep. Mike Rogers of Alabama confronted Gaetz after the 14th round of voting fell just short of producing a speaker. Vegas odds had Gaetz felled by a single punch before several other members held back Rogers.

So while Biden honored those who fought to maintain peace and order, the House dissolved into chaos due to those who backed the insurrectionists on Jan. 6. You'd expect nothing less of a party that has no moral compass and no self-respect, and whose brain trust consists of McCarthy, Gaetz, Jim Jordan and Steve Scalise. So it's no surprise that we began this week with McCarthy rewarding some of the most deranged members of his conference.

McCarthy tapped 11 Republicans as committee chairs who voted to reject the results of the 2020 presidential election. They did so by repeating the same lie about widespread voter fraud that only hours earlier had fueled the deadly insurrection at the Capitol which led to death threats against the vice president and sent those 11 lawmakers (and all the others) into hiding, afraid for their lives.

The 11 seditionists showed no shame and no care for those Republicans who refused to join them in the attempted coup, and even less for Democrats (whom they labeled "the enemy") or the overwhelming majority of Americans who detested and denounced the insurrection.

"Our committee chairs represent the very best of our conference," Majority Leader Scalise said, without a hint of irony. If this is the best of the GOP, then what is the worst? No one really wants to know.

But McCarthy told us in blunt terms in accepting the speakership what we should expect. In working together, he said, "there's nothing" we can accomplish. Sure, maybe that was a slip of the tongue, but he's probably right. McCarthy is an empty suit, a man without taste or style. He's vanilla ice cream melted on a cardboard box. He has no imagination, and no sense of history or irony. His party may  claim to be the party of Lincoln, but it also embraces states' rights. Here's a hint: That was the Confederacy (and the pro-slavery Democrats of that era). He also said more than once that he watched Abraham Lincoln cure the problems of this country, which makes one wonder whether McCarthy is in possession of a time-traveling DeLorean, is a never-aging vampire, is the modern-day Rip Van Winkle or, more than likely, is just a mediocre mind  incapable of crafting or delivering a speech worth listening to.

This does not portend well for the House of Representatives and all of Congress for the next two years. Even if Republicans vote as a block on any proposed legislation — should they be able to craft anything legible — it will fail in the Senate, where the Democrats hold a majority.

What we are likely to see, of course, is a lot more spectacle — sound and fury signifying nothing and led by Jim Jordan, who now chairs the House Judiciary Committee and conversed with Donald Trump during the insurrection. He guarantees us two years of subpoenas and hearings dedicated to Hunter Biden's laptop, as well as investigating the Jan. 6 committee and its findings. He will also take up the "politicization of the DOJ," according to McCarthy, but probably won't call Michael Cohen as a witness. Cohen could offer first-hand testimony on how the Trump administration politicized the DOJ. No, like everything else the GOP has to offer at this point, this is all empty, angry bullying.

All we're likely to get from this Congress is hearings on Hunter Biden's laptop, led by Jim Jordan — sound and fury signifying nothing. Like everything else the GOP has to offer, it's just empty, angry bullying.

The House will have trouble passing appropriation bills and omnibus bills, will threaten or perhaps cause government shutdowns and could easily lead the government to default on its debt. It isn't just that the Republicans don't understand how Congress works — particularly its members in the House — but also that they simply do not care. Blinded by their own zeal and sense of self-worth, those who know the least are in position to cause irreparable harm to those who will feel the effects of their stupidity the most — in other words, the rest of us.

The insurrection only failed on Jan. 6 because of the efforts of the 14 people recognized by Joe Biden on Friday — and dozens if not hundreds of others who did so without being noticed and without caring to be noticed. They were patriots — in fact, many were real Republicans, rather than traitors. They no longer have a place in a party with no shame, no moral center, no honor and no common sense.

I met Rusty Bowers, the former Republican speaker of the Arizona House of Representatives, on Pebble Beach outside the White House on Friday. He is one of the heroes who was recognized by Biden. He is as soft-spoken and humble as anyone you'd hope to meet. He told me that he worries about the future of the country, and was thankful for being recognized for doing his part to save it. He was only doing his duty, he said.

There is plenty of cause for concern and a still greater need for relentless scrutiny. But I'm afraid it won't come from my brethren in the press.

On Friday afternoon, Biden left the White House for a quick stop at home in Delaware, before flying on to Mexico City for a meeting with the Mexican president and Canadian prime minister. He was late, of course, as most presidents are when they leave the White House. He walked out of the residence after dark and shook hands with several well-wishers behind a rope line before jogging to Marine One, the presidential helicopter. The very same reporter who told me earlier in the day that the president was befuddled and infirm turned to me again and said, "He's running away from us."

I didn't bother responding. I did shout out, "Hey Mr. President, baby, we're over here — come talk to us." Biden slowed his roll and walked resolutely the last 10 or so paces, but he didn't come over to us or even acknowledge us. I did get a laugh from the Secret Service and a couple of White House staffers for my question — so, you know, there's that.

Once again, some of us in the press don't get it. Understandably enough, Biden has little or no desire to interact with those who don't understand the issues, cannot accurately report them and lack the experience or knowledge that would enable them to do so — in other words, most of the White House press corps.

The greatest challenge we have in the press is making sure that our people covering government understand the issues, will hold all politicians accountable and care more about their country than whether or not they can catch a ride on Air Force One. That brings us to the latest story, the classified documents found in Biden's office. We won't get that right either.

Unfortunately, at this point it seems that while the politicians may be bad, we are worse. The GOP has stated its goals plainly enough: They want to burn it all down, and will spend the next two years doing so while blaming the Democrats and conning the country in hopes of somehow finagling continued control over the levers of power.

If the press is the last bulwark against that con game, then we're all screwed.

from Brian Karem on D.C. after Trump