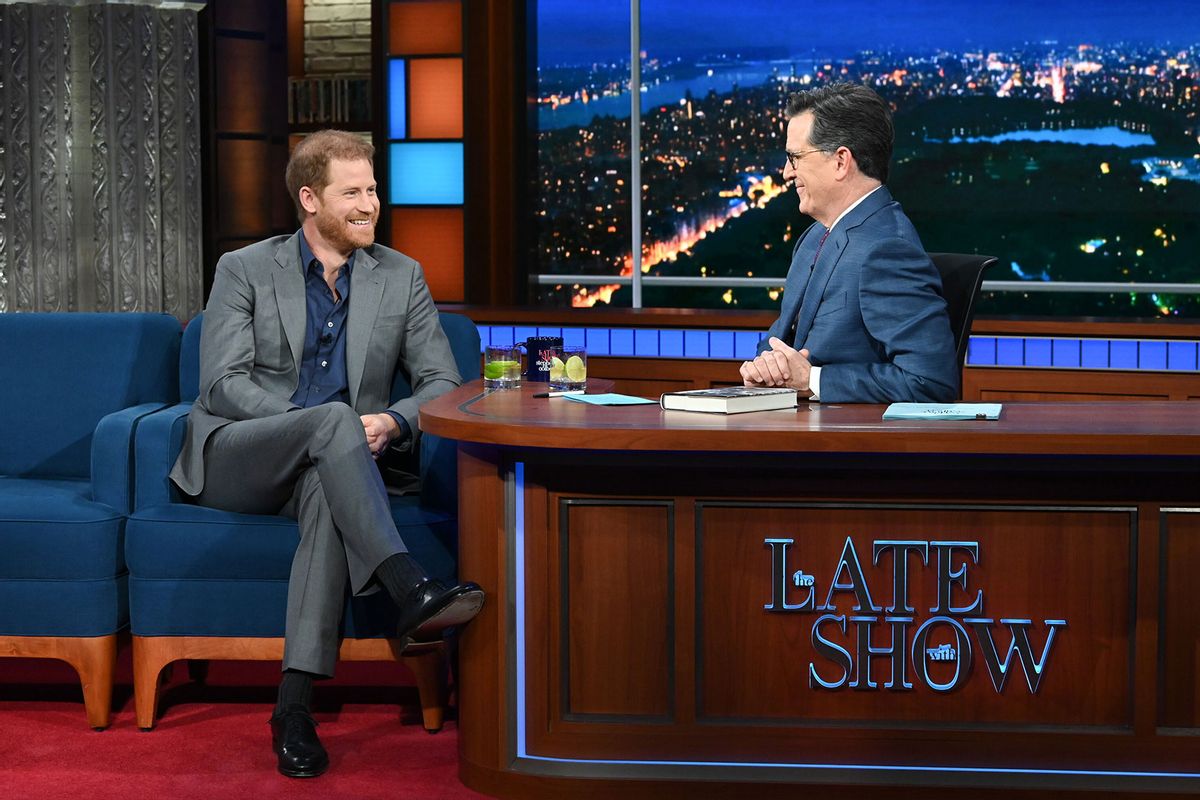 The Late Show with Stephen Colbert and guest Prince Harry, The Duke of Sussex, during Tuesday’s January 10, 2023 show. (Scott Kowalchyk/CBS)
--

Prince Harry represents everything American audiences love. Being the "spare" to his brother Prince William's "heir" makes him an underdog. He's a former substance abuser living a better life and extolling the virtues of therapy. He's also a wealthy man who, by all appearances, has a good heart. No wonder the press on both sides of the pond wants to devour him.

Each stop on his recent Stateside media tour to promote his bestselling memoir "Spare" proves this while also showing how he's "feeding the beast" in one country and leading it on a tether in the other.  As The Economist's review puts it, with "Spare" U.K. press. "had an embarrassment of riches; Harry had the riches of embarrassment."

Hundreds of thousands of people in the U.K. made "Spare" that country's fastest-selling nonfiction book ever. It moved 1,430,000 copies on its first day in the U.S., Canada, and Great Britain combined, according to Penguin Random House.

Of course, people aren't tearing into its pages or binging "Harry & Meghan" to receive an education in the parasitic relationship between the British tabloid press and the business that runs the royal family, The Firm.

To the U.S. media and its consumers "Spare" is a celebrity's offering of the most exclusive of access around, in the form of primo dish on the royal family. Queen Elizabeth II made a life out of being mysterious and unknowable; here we have her grandson willing to make her human for us. The people's love for Princess Diana is eternal, and many Americans vicariously bestow their affection for her on the son who married Meghan Markle, one of our daughters.

So to mark his book's release, the Duke of Sussex sat down with Anderson Cooper on "60 Minutes" before appearing on "Good Morning America" for a 12-minute conversation with Michael Strahan that ran in an extended 29-minute version in prime time and on Hulu.

When one recalls the true purpose of Prince Harry and Meghan's extended coming out to American society, Colbert was always going to outdo the others.

Cooper and Strahan separately and similarly invited Harry to open up about his mother, and the unresolved grief that gripped him years after her death. He explained the extent and depth of the rift between him and his brother William; revealed his true feelings about his father King Charles III's Queen Consort, Camilla; and established what he intended to accomplish in writing a book so revealing that it takes millions of strangers not only under his skin but behind his pants zipper. 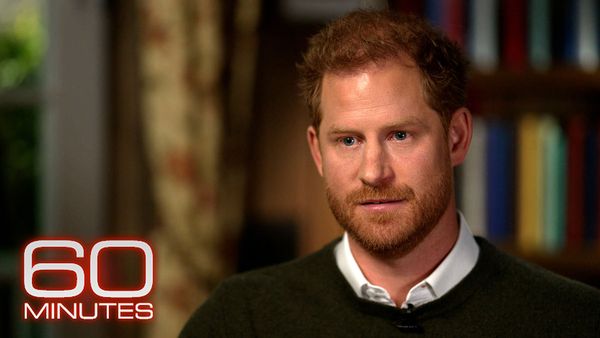 "Now, trying to speak a language that perhaps they understand, I will sit here and speak truth to you with the words that come out of my mouth, rather than using someone else, an unnamed source, to feed in lies or a narrative to a tabloid media that literally radicalizes its readers to then potentially cause harm to my family, my wife, my kids," he says to Cooper . . . and Strahan, in similar terms.

Still, neither enabled commoners to know the self-exiled celebrity prince better than Stephen Colbert did on "The Late Show," where the host and Harry engaged in a 40-minute combination of repartee and emotional unburdening over tumblers of tequila with a lime twist. Take this as a statement of respect for Colbert and disappointment in Cooper and Strahan, with the understanding that the late-night hosts and the news anchors have different job descriptions.

Without intending to, the geyser of mainstream news coverage marking the release of Harry's book exposed the soft bellies of the interviewers tasked with testing the royal's veracity. Then again, when one recalls the true purpose of Prince Harry and Meghan's extended coming out to American society, Colbert was always going to outdo the others.

Fame is the only currency the Duke of Sussex truly has; his truth and reputation are the main products he has to trade. He's also in a unique position as the only member of a highly exclusive and opaque in-group, the British royal family, willing to speak publicly about what growing up in a palace is like. Therefore, Harry needs the American media to be on his side to get the American people on his side.

Declarations like this should automatically make a journalist skeptical. But Cooper and Strahan played the part of hospitable guides rather than curious conversationalists, doing their part to validate and verify Harry's charisma instead of revealing unexpected sides of him.

As many people have pointed out in the discourse that's surrounded the royal family since the eruption of florid coverage of Queen Elizabeth's death in the fall, the American media has bent over backward to support the Sussexes without soberly interrogating Harry's role in perpetuating his family's colonialist views.

A pillar in his North American public relations campaign is to establish himself as an anti-racist standing up to the bigotry of the British tabloids, not only in defense of his wife but in solidarity with non-white people. "The UK is not bigoted. The British press is bigoted," he tells Strahan. "But the source of your information is inherently racist, biased and just wrong, then that thought infiltrates everybody's minds."

Later he adds, "The way that they speak about her and the way they treat her is incredibly relatable to everybody else of color." 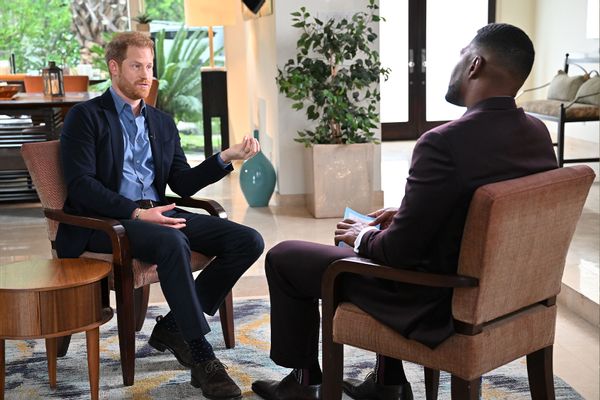 But that doesn't necessarily square with people who remember the headlines about a video from 2009 in which he referred to a Pakistani army officer as "our little Paki friend" and joked that an officer cadet looked like "a raghead," two offensive slurs used against Pakistani and Middle Eastern people. This plays into our culture's habit of viewing racism in Black and white terms, relying on Harry's reaction to what happened to Meghan as something that can be applied to everyone.

This is worth bringing up because Cooper had a perfect opportunity to confront Harry about that within their interview, and without necessarily making him look hypocritical.  Harry paves that road for him when he says, "I went into this incredibly naïve. I had no idea the British press were so bigoted. Hell, I was probably bigoted before the relationship with Meghan."

"You think you were bigoted before the relationship with Meghan?" Cooper asks, leading Harry to suddenly pull back and haltingly answer, "I don't know," before adding, "Put it this way: I didn't see what I now see."  Like, say, that incident . . . for which the palace apologized on Harry's behalf, a common PR move he now says can't be trusted.

In the broader pantheon of famous figures who rate highly enough to dominate important real estate on two network schedules, Harry is not, say, a public threat. These were low-stakes interviews whose main purpose, regardless of what Harry insists, is to out-charm his brother William in the eyes of the American public. This week's conversations and the shows that came before probably achieved that end.

Therefore Cooper's and Strahan's respective weak interviewing demonstrations matter less than Harry's performance on "The Late Show," where he revealed his comedic side, played to the folks in the theater, and easily kept up with Colbert's comedy dance.

Colbert, who describes "Spare" as "factually honest and emotionally honest,"  is the ultimate sympathetic ear, given his public experience with grief, mourning, and healing. The lion's share of their conversation concerned Harry's struggle to contend with losing his mother, and his fury at having his words about his military service and the Taliban fighters he killed taken out of context.

"That's dangerous. My words are not dangerous, but the spin of my words is very dangerous to my family," he tells "The Late Show" host and viewers, adding later that after working with veterans for most of the last two decades, "my whole goal, my attempt with sharing that detail is to reduce the number of suicides."

But the interesting points in the interview were when the host asked follow-up questions that knocked Harry off of his script, widening the crack of the window to his psyche. After Harry describes the media's chipping away at Meghan's reputation and self-esteem by besmirching her reputation, Colbert muses, "Do you think that the intent was always to make her leave, or to break her spirit so she'd be easier to control?"

This makes Harry pause and, after a sober answer and few beats, sip his drink.

Separately the three stages achieved what Prince Harry wanted, which was to use one media ecosystem against the other that maligned him and his wife, the same one that drove a wedge between his family and his brother, father and their wives. You can't blame a guy for fighting The Firm by tightening up his alliance with Hollywood. But one should expect ABC's and CBS' news divisions not to make it so easy for him.

In this instance, they did not. However, they did give Harry a reason to enthusiastically opine to Colbert's audience, "America is a great place to live." From what we witnessed of the kid glove treatment he received this week, the man ain't lying.