Proud Boys are right about one thing: It's ridiculous that Trump's not in prison 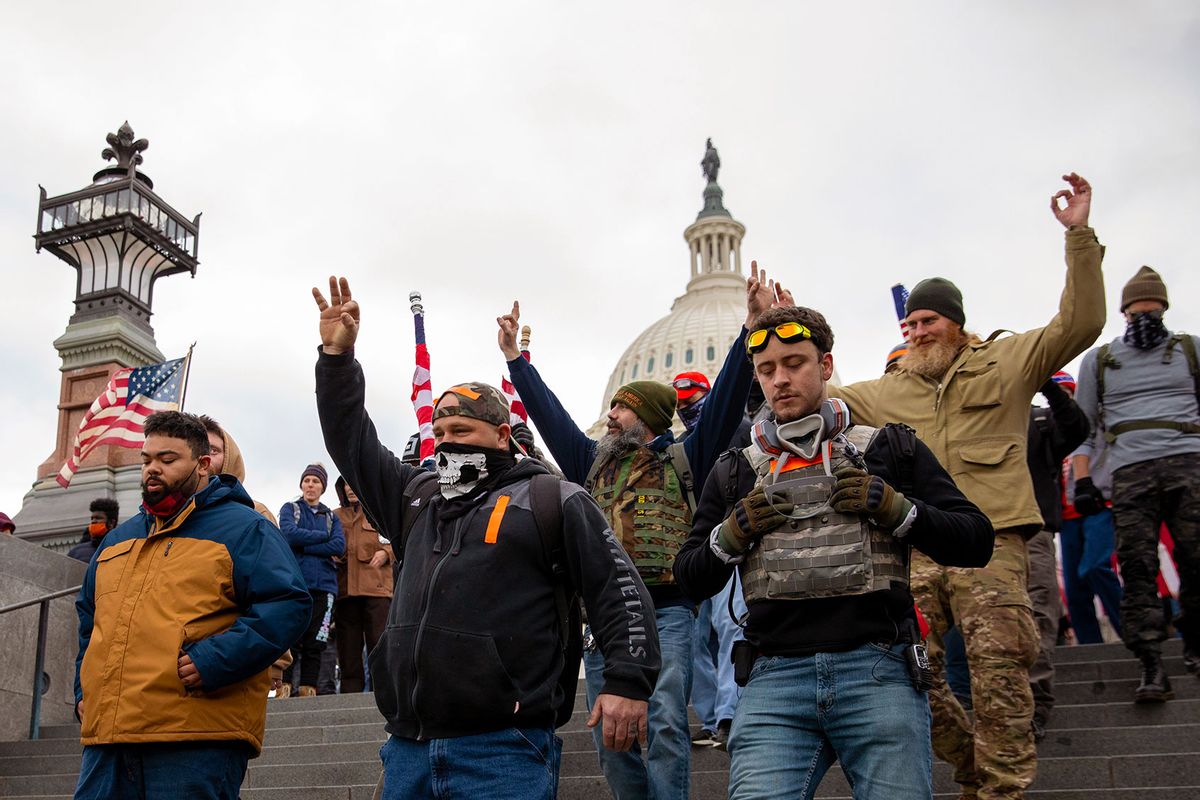 Members of the Proud Boys make a hand gesture while walking near the US Capitol in Washington, DC on Wednesday, January 6, 2021. (Amanda Andrade-Rhoades/For The Washington Post via Getty Images)
--

"President Trump told these people that the election was stolen," declared the lawyer for Proud Boys leader Enrique Tarrio last week, during opening remarks for his client's trial on charges of seditious conspiracy. Tarrio and other Proud Boys who believed they were acting on Trump's wishes when they stormed the U.S. Capitol on Jan. 6, 2021, are merely "scapegoats" for the government, he continued, because it would be too hard to put the ex-president on the witness stand, "with his army of lawyers."

Tarrio and four other Proud Boys are currently standing trial for attempting to overthrow the government. Most media coverage of their attorneys has been of a "get a load of these toolbags" variety. Joe Biggs, the Proud Boy whose pre-Jan. 6 activities included "jokingly" advocating using roofies to rape women, had a particularly high-drama defense team. One of his lawyers had his law license suspended right before trial, thanks to misconduct in defending another insurrection sympathizer, Alex Jones of Infowars. Another got into an ugly shouting match with the judge. Another lawyer for a different defendant, Zachary Rehl, has been late to court so often that she got scolded by the judge.

So maybe it's surprising that any defense attorneys for the Proud Boys have said anything coherent, let alone incisive. Yet right there in the opening arguments, Sabino Jauregui, who is defending Tarrio, went straight at the prosecution's weak spot: The government is putting the insurrection's foot soldiers on trial, while leaving the man who led and directed them, Donald Trump, not just untouched by the law but running for president again. (Supposedly.)

As defense strategies go, mind you, that's fairly weak. Even if we accept, as indeed we should, that Trump is the guiltiest of all people who were involved in Jan. 6, that doesn't mean the thousands of other people who were part of the insurrection are innocent. Those who acted on Trump's implicit orders are full-grown adults who had every opportunity to say no, as evidenced by the 258 million adult Americans who also heard the Big Lie but did not attempt the violent overthrow of democracy. "Trump made me do it" is a pathetic excuse.

But even more than the Oath Keepers convicted last year for their role in the insurrection, the Proud Boys now on trial face a likely insurmountable pile of evidence of their guilt. Not only is there photo and video evidence of most of them committing crimes during the riot, there's also an extensive catalog of text messages and other communications showing how much planning and intent there was before it all happened. So trying to blame Trump's incitement, and making the implausible claim that the Proud Boys just got swept up in the moment, is all they've got.

Notably, the Oath Keepers tried a similar defense last year: All their online chatter about insurrection was just macho bluster, and when they acted on those urges, it was a spontaneous impulse. But despite reports suggesting their defense team might try to pin the blame on Trump, at trial, their lawyers stepped carefully around the argument that maybe the ringleader should face harsher punishment than his minions.

What has changed to make the defense team for the Proud Boys speak out against Trump? It may just be a reaction to the outcome in the Oath Keepers trial, where all five defendants now facing serious prison sentences. It might also be because the judge in this trial is allowing the prosecution to play the famous video clip of Trump calling on the Proud Boys to "stand by," implying that orders for violent action would soon be coming. With that in evidence, the defense may feel they have no choice but to redirect attention from those who followed the order to the man who gave it.

Ultimately, however, I suspect this shift in tactics between the two cases reflects a growing sense of frustration in the larger public over the continuing failure of Attorney General Merrick Garland and the Department of Justice to hold Trump accountable for leading, quite literally, an attempted fascist coup.

Since the Oath Keepers trial ended, for instance, the House select committee investigating the Jan. 6 attack has issued its final report, which did not shy away from imploring the DOJ to prosecute Trump. "The central cause of January 6th was one man, former President Donald Trump," reads the committee's executive summary. Accountability for this "can only be found in the criminal justice system," committee chair Rep. Bennie Thompson, D-Miss., said during the panel's final public meeting.

While this is purely anecdotal, I've noticed an uptick in the past month of cable-news talking heads insisting that Trump must be indicted. Some of this is likely driven by hope, as Garland finally — arguably months too late — appointed special prosecutor Jack Smith, to deal with the Trump situation. But it's also driven by how effective the House committee was in showing not just that Trump incited and directed the insurrection, but that evidence of his guilt was always there, for those willing to look for it.

Polling data shows that 64% of Americans — basically anyone who isn't a Fox News junkie — put "a lot" or "some" responsibility for the events of Jan. 6 on Trump. That percentage is almost certainly higher in and around Washington, D.C., where this trial is being held. It's less clear whether that translates into sympathy for the peons who raided the Capitol at Trump's bidding. Certainly, the Jan. 6 committee, likely due to the influence of vice chair Liz Cheney, presented at least some of the insurrectionists as being gullible victims of Trump's machinations.

"They put their faith, their trust, in Donald Trump," Cheney said during a July committee hearing, in which one convicted rioter gave testimony expressing remorse for his role in the insurrection.

The Jan. 6 committee makes their final plea: Prosecuting Trump will be hard, but morally necessary

Ultimately, I'd be surprised if the "innocent dupes" argument gets much traction with a D.C. jury, whose members were close to the action and probably understand that the destruction was the result of people choosing to believe Trump's lies. Still there's some validity to the idea that it's unfair to convict the Proud Boys while Trump plays golf in Palm Beach. It will certainly make things uncomfortable for the prosecutors, who work for the same DOJ that has yet to file a single charge against the former president. That's likely not enough to lead to acquittals for the Proud Boys, but I wouldn't be surprised if at least some jurors flinch at convicting these nimrods on the most serious charges, while Trump plays his "Get out of Jail Free" card.

Of course, if Merrick Garland wants to relieve the tension created by this contradiction, I hear he manages law enforcement officers who have handcuffs and guns and all that stuff, and who arrest people all the time. "Why are you going after the little guys and not the boss?" suddenly loses all merit if Donald Trump is actually arrested. The Proud Boys trial is expected to last for several weeks. That's plenty of time for the defense to taunt the prosecution about the government's cowardice — and plenty of time for Garland to file an indictment against Trump and take that argument away for good.