The "Lord of the Rings" director seizes the opportunity to make a grandiose prequel trilogy. Not everyone approves 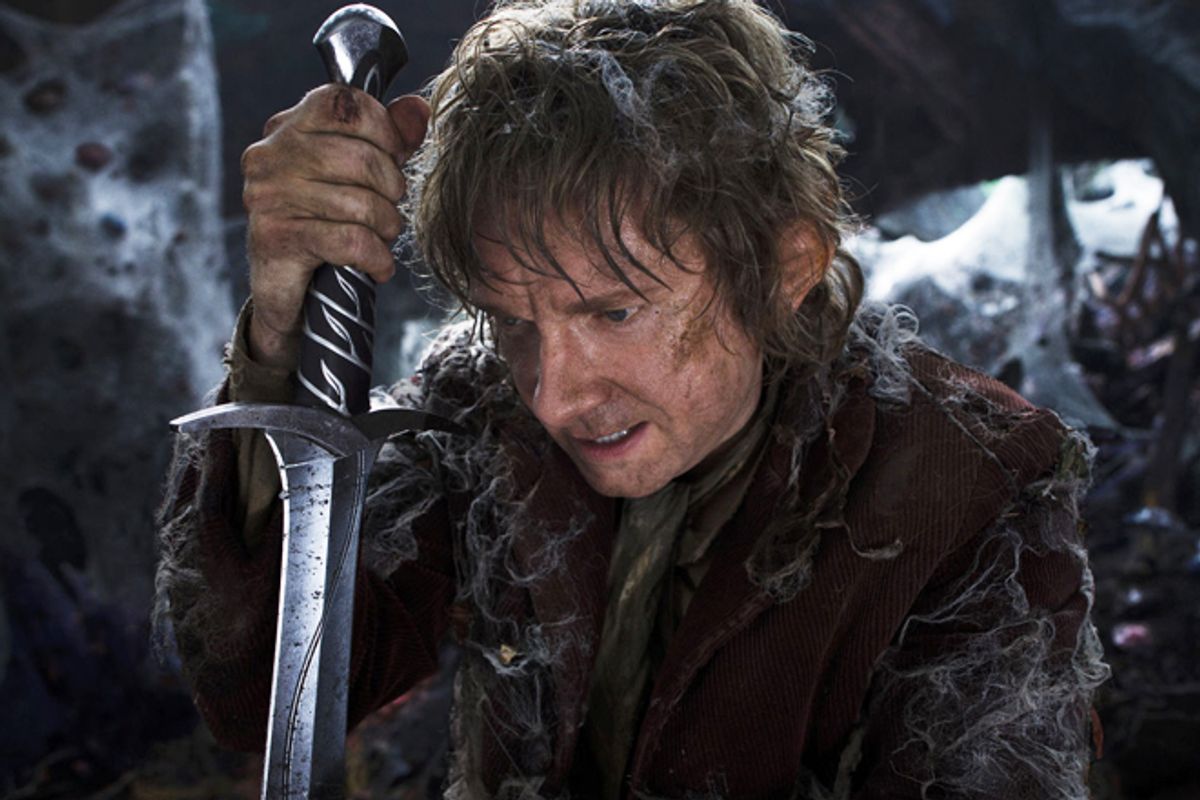 Martin Freeman in "The Hobbit"
--

There are two major strains of reaction to Peter Jackson’s announcement that his long-brewing film adaptation of J.R.R. Tolkien’s “The Hobbit,” which had already swollen from one movie to two, will now be a trilogy extending into the summer of 2014. I feel both of them at the same time: I’m excited, and I fear the worst. (Of course, that’s how I feel almost every time I watch a movie, but never mind.) On one hand, surely this is the most serious case of sequel bloat and metastasis in pop-culture history. On the other, if anybody can pull it off, Jackson can, and the idea of transforming his “Hobbit” movie into a wide-ranging “Lord of the Rings” prequel has enormous fan appeal, not to mention enormous financial appeal.

In recent years, we’ve gotten used to the phenomenon of final-chapter mitosis, with the last installments of the “Harry Potter,” “Twilight” and “Hunger Games” adaptations all being split in half, to greater or lesser effect. (While I pride myself on my contrarian defense of the “Twilight” movies, “Breaking Dawn Part 1” appeared to be an extended commercial for some unidentified commodity: A Club Med competitor? A feminine hygiene product? A cologne aimed at gay men?) But Jackson’s “Hobbit” announcement surely breaks new ground in terms of ambition or chutzpah or hubris; as a headline on the site Badass Digest put it yesterday, “It’s Official: 300 Page Children’s Book to Be a Trilogy.”

Of course, if anything at all is clear about this situation it’s the fact that Jackson, along with co-writers Philippa Boyens, Guillermo del Toro and Fran Walsh, have taken on something much larger than a straightforward adaptation of Tolkien’s 1937 fantasy classic, which first opened the door to Middle-earth and the story of the One Ring. (It’s hard to imagine anybody reading this article who requires a spoiler warning, but here it is!) It’s obvious that Jackson takes his self-appointed role as inheritor and interpreter of the Tolkien mythos extremely seriously, perhaps too much so. My guess is that he’s seizing the opportunity to harmonize the lighter, fairy-tale atmosphere of “The Hobbit” with the grander, mythic universe of “Lord of the Rings,” something Tolkien himself only partly succeeded in doing.

To cite the most famous example, when Tolkien first wrote “The Hobbit,” he didn’t yet know that the magic ring Bilbo Baggins gets from Gollum was the most powerful and most accursed artifact in all of Middle-earth. In the first edition, Gollum apparently loses the ring to Bilbo in a bet, and they part on friendly terms. The more famous and fateful version, in which Gollum’s somewhat justified imprecation – “Thief! Thief, Baggins! We hates it, we hates it, we hates it forever!” – presages what is to come, was not introduced until 1950. A decade after that, Tolkien reportedly set out to rewrite “The Hobbit” so that it synchronized more closely with “Lord of the Rings,” but abandoned the effort after a few chapters. (Mercifully, however, he did remove references to the High Elves as “Gnomes” by the mid-‘60s.)

In Jackson’s Facebook post yesterday, he wrote about watching a rough cut of the two-part “Hobbit” movie with Walsh and Boyens, and feeling delighted with the story, the characters and the cast.

All of which gave rise to a simple question: do we take this chance to tell more of the tale? And the answer from our perspective as the filmmakers, and as fans, was an unreserved ‘yes.’

We know how much of the story of Bilbo Baggins, the Wizard Gandalf, the Dwarves of Erebor, the rise of the Necromancer, and the Battle of Dol Guldur will remain untold if we do not take this chance. The richness of the story of “The Hobbit,” as well as some of the related material in the appendices of “The Lord of the Rings,” allows us to tell the full story of the adventures of Bilbo Baggins and the part he played in the sometimes dangerous, but at all times exciting, history of Middle-earth.

Now, I’m sure some deeper practitioners of Tolkien science will be able to correct or amplify what I’m about to say, but the wizard Gandalf (so memorably portrayed by Ian McKellen in the LOTR movies) spends much of “The Hobbit” missing in action, the Necromancer (aka the great and terrible Lord Sauron, he who forged the Ring) is a shadowy offstage figure who plays no direct role in the book, and the Battle of Dol Guldur (that would be the Necromancer’s fortress in Mirkwood, naturally), while contemporaneous with Bilbo’s adventures, is only cryptically alluded to but never explained. So one way of describing this movie project is to say that Jackson and his collaborators are indeed telling the story of “The Hobbit,” but abandoning the ground-level, hobbit’s-eye view of events relied upon in Tolkien’s original novel.

Does that sound alluring? A full-bore, geeked-out, three-part prequel to “Lord of the Rings,” drawn both from the text of “The Hobbit” and from Tolkien’s ancillary, explanatory material, that takes us all the way from the Englishy innocence of Hobbiton to Smaug’s horde and the Battle of Five Armies and back again, leaving us at the doorstep of Bag End and “The Fellowship of the Ring”? Sure, yeah, it does; I already have the evenings of Dec. 10 and 11 blocked out as probable dates for the press screening of the first film. But like a lot of other lifelong Tolkien fans, I’m not convinced this is a good idea. Stretching this rather modest novel over six to nine hours of movies in quest of an undeniable worldwide windfall is possibly or potentially dangerous, like the work of someone who has tasted the devil’s candy and survived and now wants more and more, someone filled with the arrogance of immense success who believes he cannot possibly fail. It sounds a bit – just a bit, mind you – like a case of someone who has held the Ring in his hands and now wants it back.

Rumors abound (without any basis I know of) that Jackson’s “Hobbit” movies will include newly invented characters who appear nowhere in Tolkien, or that the whole project has now crossed an invisible line that separates literary adaptation from free-floating inspiration or glorified fan fiction. We’ll have to see about that, but Peter Jackson is now at the helm of a huge enterprise that is simultaneously much larger and much smaller than the world of Tolkien’s writing.

There’s nothing fake or mealy-mouthed about Jackson’s immense admiration for the late author, or his genuine desire to tell the stories the best way he can, but I fear that he now believes he has inherited Tolkien’s mantle and can do no wrong. I really hope these movies are terrific, but I feel a pang of identification with the “intellectual despair” expressed by Christopher Tolkien, the writer’s 87-year-old son and literary executor, who broke his long silence on the Jackson movies in a recent interview with the Paris newspaper Le Monde. In the midst of his struggle to stop “Lord of the Rings” theme-park rides and Las Vegas slot machines – and his lawsuit against New Line Cinema seeking film profits, which yielded his family trust an estimated payment of $38 million – Christopher says his father has become a monster, “devoured by his own popularity and absorbed by the absurdity of our time.” The gap he perceives between “the beauty and seriousness of the work” and its commercial translation, Christopher says, “has reduced the aesthetic and philosophical impact of this creation to nothing. There is only one solution for me: Turning my head away.”

J.r.r. Tolkien Movies Peter Jackson Science Fiction And Fantasy The Hobbit The Lord Of The Rings