Online racists thrilled to candidate Donald Trump, but a year later the "alt-right's" Thanksgiving is a turkey 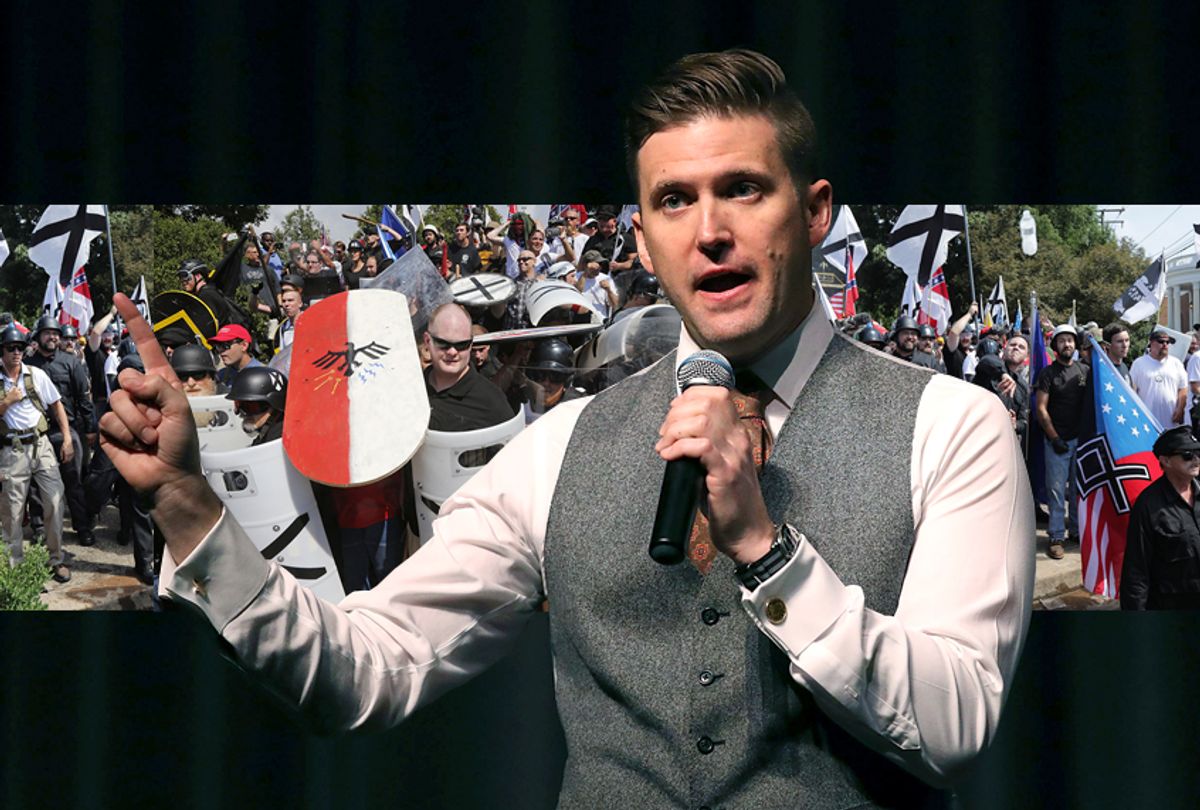 It's been just over a year since Donald Trump surprised everyone, including himself, by winning the 2016 presidential election. No group of Americans was more thrilled by his victory than the small band of online racists who call themselves the "alt-right."

In the months leading up to the vote, almost everything was going well for them. Liberal journalists covered their every move, and in ways that were almost celebratory. Vice paid for a flattering portrait series of various alt-right activists while one of its reporters almost seemed to get flirty with Richard Spencer, a movement leader and the supposed creator of the term.

Even the progressive magazine Mother Jones couldn't help marveling that Spencer was able to eat ahi tuna with chopsticks. Democratic nominee Hillary Clinton's ham-fisted elevation of the movement in a signature campaign speech was exactly what the Nazi wannabes wanted to hear.

After Trump's victory, the various activists and writers who had latched onto his harsh rhetoric about immigration and crime waxed rhapsodic about how they were taking over the Republican Party. Andrew Anglin, the creator of the popular Daily Stormer website and an overt neo-Nazi, wrote repeatedly that he and his compatriots were no longer the "alternative" to conventional American conservatism; they were the mainstream. He and others at the Right Stuff podcast network began describing themselves as Republicans after previously spurning the label.

"We have to start viewing it as our party," Mike Peinovich, the Right Stuff's creator, said on an "alt-right" podcast last November.

"I mean, we already are, this is the thing, and Trump did like 90 percent of the work for us," he added. "I'm not really thinking a third party is viable, and why would we want it? We have this party which is engaged, which has enrolled the mass of white people, and that's our vehicle."

Despite their grand talk, however, the far-right extremists soon found that President Trump was mostly interested in the policy agenda of the conventional "cuckservatives" they had enjoyed seeing him demolish during the GOP primaries. Not only did Trump appoint many Jewish people to high-ranking positions in his administration, he also made dismantling the Affordable Care Act his primary legislative effort. The "big, beautiful wall" that the former game-show host had promised his acolytes has received no funding from the Republican-dominated Congress. The large-scale deportations of undocumented immigrants the frog-bearing fascists had fantasized about have not taken place.

Neo-Confederate blogger Brad Griffin was one of the few within the movement to see what was about to happen in early January.

"So far, I haven't seen anything from Congress except big plans to do what Republicans always do," he wrote on Twitter. "How did we go from BUILD THE WALL to UNSHACKLE WALL STREET?"

Griffin, who writes under the pen name of Hunter Wallace, was condemned for his "black pill" rhetoric, which fellow white nationalists found to be overly pessimistic. Ten months later, his predictions have largely proven correct.

While Trump has repeatedly thrilled his "alt-right" acolytes with things he says, including his pronouncements on behalf of unspecified "very fine people" who showed up at an infamous rally the online racists organized last summer in Charlottesville, Virginia, he has done very little for them in terms of policy. White nationalists' hopes and dreams that their covert ally Steve Bannon would begin to steer federal policy in their direction were utterly dashed. Bannon was instead serially demoted within the administration and eventually fired outright, left to rage on the outside against the far right's eternal Great Satan, "the Republican establishment."

Bannon's expulsion from the White House roughly paralleled what happened to the "alt-right" itself after Trump's election. Before the president took office, Spencer and hundreds of other neo-Nazis gathered inside the prestigious Ronald Reagan Building in downtown Washington for a party that ended in Nazi salutes. A year later, Spencer's National Policy Institute had to resort to holding its annual conference in a windy barn in suburban Maryland.

The contrast between the same two events, just a year apart, could not be greater. Spencer, Peinovich and others who once claimed to be taking over America (or at least one of its major political parties) were reduced to sitting on folding chairs in a barely heated barn in 30-degree weather. The humiliation became even greater before the end of the conference when the owners of the venue, Rockland Farms, asked the group to leave in the middle of its event.

"I’m certainly disappointed, but we are not going to retaliate. It’s just life in 2017 for us," Spencer told The Washington Post. Having received a refund from their venue, the ragtag racists resorted to ordering pizza from Papa John's, which they ate in rented rooms, according to an account published by a website operated by Spencer. Some activists blamed their humiliation on left-wing "antifa" activists who monitor the "alt-right" and frequently protest their events.

"The sabotaging of the conference puts NPI in an awkward situation, making it difficult to operate above the flashmob or private gathering level," one "alt-right" writer complained afterwards.

The movement's physical travails have also been paralleled in the digital realm in 2017. While the frog-loving fascists hoped the Charlottesville rally would become a massive recruiting tool, it instead launched a large-scale effort among technology companies to ban neo-Nazis from using their services. The Daily Stormer has been particularly impacted, repeatedly losing its domain registration, largely because Anglin has refused to provide legitimate contact information to domain registrars in the hopes of evading several lawsuits against him.

Nonetheless, while the sudden takeover of the Republican Party that the "alt-right" had hoped for didn't happen, the gradual intrusion of white nationalist rhetoric and staffers into mainstream conservative publications like the Daily Caller indicate that the movement has staying power. This is partly because the conventional conservative nostrums of Christian nationalism and anti-government rhetoric have become utterly irrelevant in the post-Cold War world.

Additionally, despite all of their many missteps and defeats, "alt-right" activists also have significantly more energy than the decrepit and corrupt fake Christians with whom they compete. The failure of Charlottesville was particularly enraging to Anglin's Stormer acolytes who gathered after the rally imploded to wish "death to the enemies of the white race" and to sing about washing their hands in the blood of people of African descent. Barry Goldwater's descendants once had similar (and clearly not murderous) fanatical energies, but after 50 years, all they seem to care about is monetizing their dwindling audience.

The "alt-right" may have no idea how to accomplish anything significant beyond triggering leftists on the internet. But the utter inability of today's Republican Party to fight it off, or even to understand what has happened to American conservatism, suggests that the ideological crisis provoked by the "alt-right's" emergence is far from over.