Mainstream Republicans already despised Steve Bannon. Now Trump, the GOP base and even the alt-right hate him too 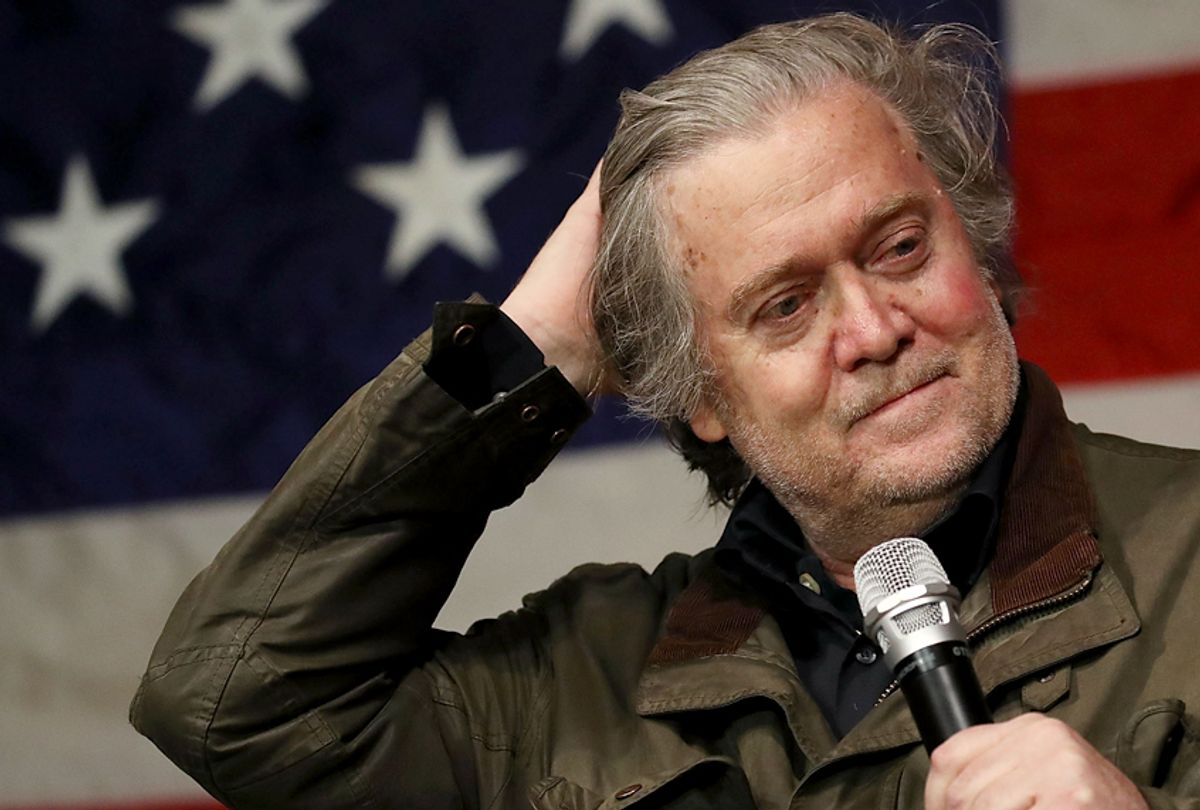 Despite months of hard work at self-promotion, the former top strategist to President Donald Trump now finds himself isolated from the Republican base he has carefully cultivated for years.

Unsurprisingly, Bannon’s own mouth has once again been the source of his problems. Mere months after he got himself fired for trashing colleagues and the president in an interview with the liberal magazine the American Prospect, the Breitbart News chairman found himself under full attack from Trump on Wednesday afternoon after word got out that Bannon had slammed Trump and his family members during interviews with author Michael Wolff, whose book "Fire and Fury: Inside the Trump White House" was excerpted in New York magazine.

Known for his fondness for broad and careless statements, Bannon lashed out in conversation with Wolff about Donald Trump Jr. and presidential son-in-law and top aide Jared Kushner, accusing both of being “treasonous” and “unpatriotic” for agreeing to meet with a Russian lawyer they were told would offer them negative information about Democratic nominee Hillary Clinton during the 2016 presidential campaign.

Bannon’s comments in Wolff’s book, which will be published next week, also suggest that he believes that the younger Trump had introduced his father to Russian lawyer Natalia Veselnitskaya while he was meeting with her.

“The chance that Don Jr. did not walk these jumos up to his father’s office on the twenty-sixth floor is zero,” Bannon was quoted as saying in a news report from the Guardian which discussed Wolff’s volume.

Trump wasted no time responding forcefully to his former staffer and longtime friend in a blistering public statement released by the White House press office.

“Steve Bannon has nothing to do with me or my Presidency. When he was fired, he not only lost his job, he lost his mind,” Trump wrote.

The president then singled out Bannon as a serial leaker and self-promoter:

Steve pretends to be at war with the media, which he calls the opposition party, yet he spent his time at the White House leaking false information to the media to make himself seem far more important than he was. It is the only thing he does well.

According to the Washington Post, Trump had wanted to blast Bannon for weeks after Vanity Fair published a lengthy profile of the Breitbart executive that featured several extremely negative statements about Kushner. Trump had also repeatedly expressed frustration with Bannon for interfering in Alabama’s recent special election on behalf of Senate candidate Roy Moore, who was widely regarded by Republicans as a severe liability for his extremist views --even before he was accused of pursuing and assaulting teen girls in the 1970s.

“Steve doesn’t represent my base — he’s only in it for himself,” the president wrote. He then hailed congressional Republicans, whom Bannon has spent a decade railing against, for “helping to finally take our country back and build it up, rather than simply seeking to burn it all down.”

The line about Bannon wanting to burn the world down is a reference to Bannon’s frequent claims that America is in the midst of several “wars” and his self-professed goal of “destroying the state.” Donald Trump, a man known for his love of creating chaos, has finally found someone he thinks is too destructive.

The president’s turn against Bannon also seems to have turned the conservative grassroots against the Breitbart chairman, even among the legions of commenters on his website.

“Bannon is wrong, he has no business going after President Trump's family. This man is an anchor that is part of the swamp,” one Breitbart reader wrote.

Another popular comment blasted Bannon for trying to manipulate the Breitbart audience:

Divide and conquer is Bannon’s strategy. He’s just as bad as the far left. Wake up, people. The articles are slanted to blame "others" for all your troubles. It’s wrong. It’s actually pretty evil. Bannon knows exactly what he’s doing.

Donald Trump Jr. went after Bannon as well. “Andrew Breitbart would be ashamed of the division and lies Steve Bannon is spreading!” he tweeted, referring to the founding editor of the site that Bannon has led since Breitbart's untimely death at 43.

Hours later the younger Trump was even more pointed in another tweet. “Steve had the honor of working in the White House & serving the country. Unfortunately, he squandered that privilege & turned that opportunity into a nightmare of backstabbing, harassing, leaking, lying & undermining the President. Steve is not a strategist, he is an opportunist,” he wrote.

The ousted White House adviser was mocked by his onetime friend and colleague Matt Drudge, who called him “schizophrenic.” Sen. Mitch McConnell, R-Ky., piled on with a sarcastic tweeted video showing the Senate Majority Leader smiling fondly after Trump sent out his press release.

“I think that Bannon thinks he's extraordinarily important,” the former GOP congressional leader told host Neil Cavuto. “Bannon has an exaggerated sense of self-importance, and the news media, of course, builds it up, because it’s exactly, in the age of the Kardashians, the kind of nonsense that they love to fill time and space with.”

Even several of the Republican primary challengers whom Bannon had been recruiting or supporting over the past several months have begun edging away from him.

That his readers and partisan allies would turn on Bannon so rapidly is no surprise. His policy agenda of major infrastructure spending, zero immigration and open pandering to white nationalis, makes him a severe outlier within the Republican Party.

But Bannon can’t even count on the support of white nationalists anymore. He was finally forced to abandon them, after years of covertly promoting their views on the pages of Breitbart News, giving them “space to destroy” while he was in the White House, and aiding extremist candidates like Paul Nehlen, a onetime Paul Ryan primary opponent whom Salon exposed last year as openly allied with self-described fascists and anti-Semites. After Nehlen’s activities resurfaced last month and were reported by other media outlets, Bannon and his publication finally had to disassociate themselves from him.

That move has embittered many “alt-right” activists who have begun to ridicule Bannon as a “cuck” or a dupe controlled by Jewish interests.

Despite the massive outpouring of rage that Bannon now faces, news moves rapidly in the Trump era and the president himself has repeatedly shown a fondness for keeping in touch with people he had once fired, including his former campaign managers Corey Lewandowski and Paul Manafort. (Even Anthony Scaramucci, whose employment as White House communications director barely lasted a week, has hinted that Trump now wants him back.)

This exile feels different, however. For one thing, both Lewandowski and Manafort were smart enough to refrain from criticizing the president. For another, Bannon’s chief financial patrons, the billionaire father and daughter Robert and Rebekah Mercer -- who he allegedly boasted might back him in a 2020 presidential campaign to replace Trump -- also appear to have abandoned him. Robert Mercer publicly did so in November after Breitbart News was revealed to have worked covertly with white nationalists. According to the Washington Post, Rebekah Mercer is now unwilling to fund Bannon's projects as well.